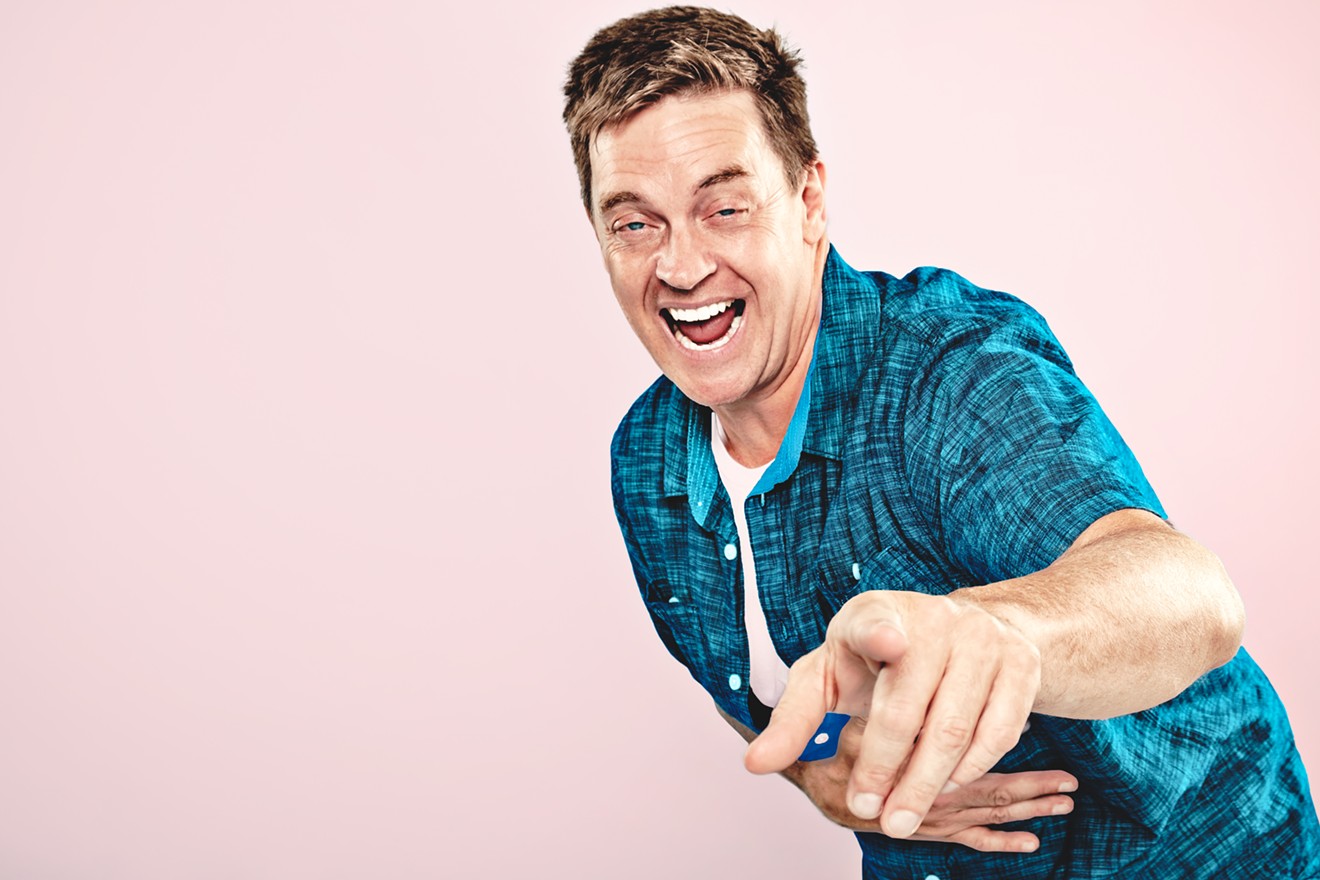 Shut the f—- up. Jim Breuer is over using curse words in comedy. Phil Provencio

In 2009, comedian Jim Breuer found himself carrying a thriving comedy career and rabid fan base thanks to his manic style of hard rock, stand-up storytelling, his time on Saturday Night Live and memorable performances in cult films like Dave Chappelle's Half-Baked and as a frequent guest on Howard Stern's radio show.

That's when he did something that would be career suicide for lesser comics and even some on his level. He decided he would no longer curse in his act.

"I found myself just wanting to write better instead of ending everything with a curse," Breuer says. "My kids are on the internet, and I kind of forced myself to write a little better."

Breuer hasn't backed too far down from the hard-partying, stoner-eyed, metalhead persona that built him a following on the stand-up circuit and led to high-rating specials for Comedy Central and Epix.

"When I say clean, it's not like the subject matter is always clean," he says. "It's not Disney, but I don't like cursing at a show. I find that I love cursing. I love listening to people curse, but I like when people leave my audience going, 'Wow, it was nice you didn't curse at all. It seems like you should have or did, but you didn't.'"


"The stories never end. That's what life is: experiences and stories. I have a lifetime of them and they still keep piling up." — Jim Breuer

It's the next logical and evolutionary step for Breuer, who's also a husband and a father with three daughters, and a man who genuinely wants to make people laugh without shifting into full "Dad joke" mode. He's spent the last few years writing and perfecting material that mixes his unique style of manic performance with the familial experiences of being a family man. He's put together an official "Live and Let Laugh" comedy tour that will make a stop on Tuesday, Oct. 29, at the Winspear Opera House for fans who still greet him by literally braying like goats.

"I've been doing shows forever, but not a condensed tour where I'm hitting multiple cities in a short amount of time and doing press for it and announcing it months earlier and doing merch and all that rigmarole," Breuer says without pausing. "For me, it's a productive way to start getting out there."

Unlike other celebrity comics, the New York native has spent most of his career doing stand-up, starting with his first paying gig in 1989 in Clearwater, Florida. Breuer earned a spot on SNL in 1995 alongside Will Ferrell and Norm MacDonald, where he stood out among the cast with characters like the mutant veejay Goat Boy and an amped-up Joe Pesci impression that led to a memorable encounter with the real Joe Pesci.

Breuer's time on the classic sketch show sparked his friendship with iconic metal band Metallica and led him to dream showbiz opportunities like getting to interview the band more than once for his SiriusXM radio show and even emceeing their concerts and opening for them, most recently on the group's 2018 WorldWired Tour.

Breuer says that doing comedy for a heavy-metal audience was actually easier than one might think. It's like Metallica plucked him out of the crowd and put him onstage.

"I am that crowd," he says. "It's a perfect marriage. I grew up a Metallica-head and loving Judas Priest and AC/DC. Being in front of that crowd was a piece of cake. I knew everyone in that audience."

Breuer can also capture an audience's attention with his vibrant gift for storytelling just as well as he can craft a bit for his act. One of his funniest bits comes from his teenage years, working a summer job in the paint section of a Sears in Long Island, where a prank call meant to rattle a new employee with a stick up his butt led to a mass evacuation of the store and the shopping mall attached to it.

"The stories never end," he says. "That's what life is: experiences and stories. I have a lifetime of them and they still keep piling up."


Having so many unique experiences and personal stories in his back pocket makes Breuer's shows more malleable and allows him be more in the moment. Most times, Breuer says, he doesn't even know what he'll say or talk about onstage until it starts to filter through the theater's audio equipment.

"In the past, I had a complete outline of what I was doing," Breuer says. "This time, I have pieces. I've been doing this, and I can’t wait to bring it out on the road. I've been doing some little dates with it, and it's amazing to see what works in Biloxi, Mississippi, will work in Philadelphia and what works in Arizona works just as much as San Francisco. It gets me more amped up that this is what people want to hear and see."
KEEP THE DALLAS OBSERVER FREE... Since we started the Dallas Observer, it has been defined as the free, independent voice of Dallas, and we'd like to keep it that way. With local media under siege, it's more important than ever for us to rally support behind funding our local journalism. You can help by participating in our "I Support" program, allowing us to keep offering readers access to our incisive coverage of local news, food and culture with no paywalls.
Make a one-time donation today for as little as $1.