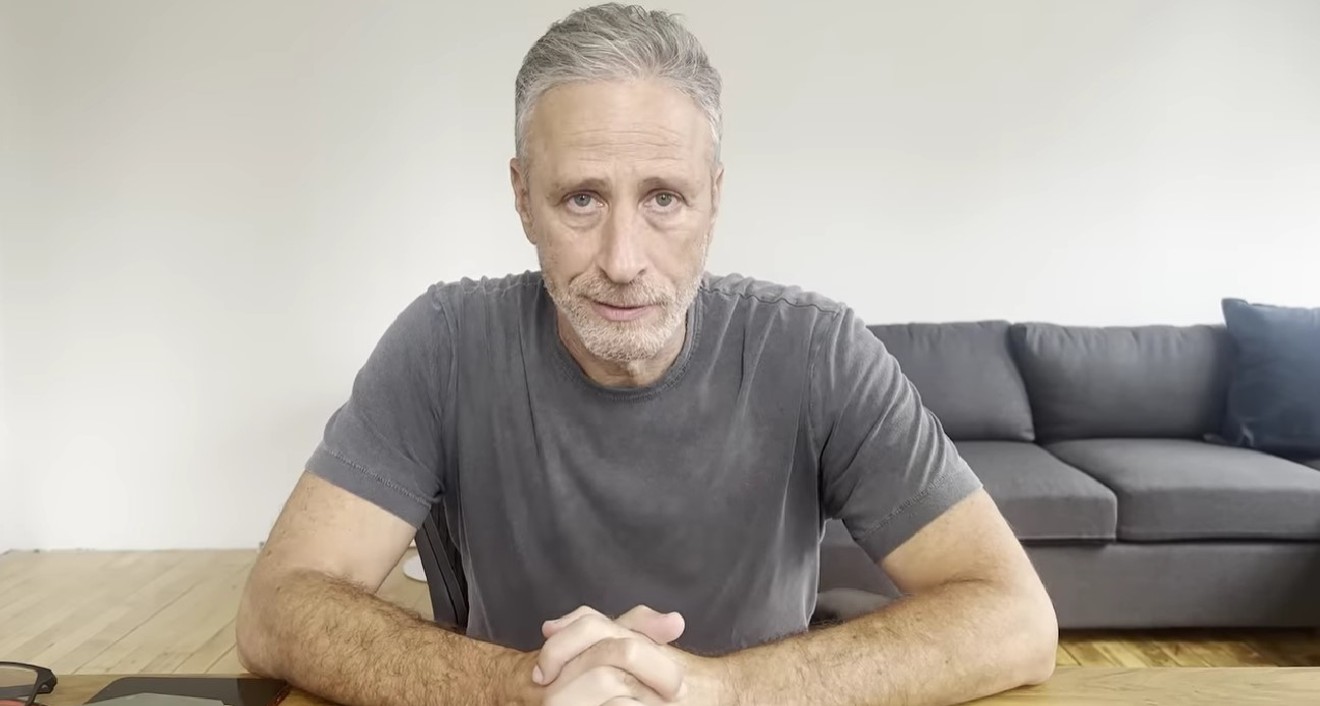 Comedian Jon Stewart addressed Sen. Ted Cruz and his stand on the PACT Act on the YouTube page for Stewart's Apple+ series The Problem With Jon Stewart. Screenshot from YouTube
Having Ted Cruz for a senator is like having an appendix: You know it's there but you're not sure what purpose it serves. You ignore it as long as you can, until it starts to hurt — and then you consider ripping it out with your own hands.

So anytime Cruz's name comes through on a news alert, an email or a ballot, it's usually greeted with the kind of hopeless grumble you hear only from patients right before a prostate exam. You know you have to go through with it, but you also know you're not going to like it.

This time, it involves how Cruz made constituents grumble by changing his vote on a bill that any rational human being could get behind

Last June, the U.S. Senate passed the Sgt. First Class Heath Robinson Honoring our Promise to Address Comprehensive Toxics Act of 2022 or the Honoring Our PACT Act. The bill addressed health problems in servicemen and women who were exposed to "burn pits," defined by the Veterans Administration as "an area devoted to open-air combustion of trash" consisting of toxic chemicals, paints, metals, munitions, petroleum, plastics and other disposable items. Members of the military started coming down with serious respiratory illnesses from asthma to lymphoma after being exposed to burn pits, and the VA started a registry in 2014 to track the practice and the illnesses it caused.

The VA and the federal government took years to acknowledge the problems caused by burn pits, but finally this year, the U.S. House passed the first version of the PACT Act, which would increase health care eligibility and expansion for military personnel suffering from maladies caused by burn pits, enact safety measures to protect servicemen and women, and conduct extensive research on the health effects of the practice, according to congressional records.

Last week, 25 Republican senators including you-know-who suddenly decided to change their vote on the PACT Act, and the bill failed in the zero hour. Groups such as the Veterans of Foreign Wars (VFW) made a last-minute visit to meet with the senators who had a sudden change of heart, to express their outrage.

"The VFW has said time and time again that passing the PACT Act will save lives," said VFW National Commander Tim Borland in a released statement. "These 25 senators who broke their promise to veterans are risking more veterans getting sick and dying with every day this is delayed. These senators need to remember that it is the veteran that paid the price for their freedoms, the life they live and the fresh air they breathe."

Former Daily Show host and comedian Jon Stewart was also one of the notable, angry faces in the crowd of disgruntled veterans and military personnel marching on the Capitol. He dedicated an entire episode to the practice of burn pits in the first season of his Apple+ show The Problem With Jon Stewart and has often visited the Capitol and made the media rounds to shame Congress into reversing course on failed legislation aimed at providing additional medical care and protections for military personnel and first responders.
Since Cruz reversed his vote on the PACT Act, the tabloid outlet TMZ caught up with him in an unidentified airport to talk about Stewart's criticism of the senators who changed their vote. Cruz claimed the reason he and his Republican colleagues changed their votes had nothing to do with the main scope of the bill. The reason had to do with Democratic trickery.

"What the dispute is about is they played a budgetary trick, which is they took $400 billion in discretionary spending and they shifted it to mandatory," Cruz told TMZ.

Stewart saw the clip and took to YouTube to issue a personal address to Cruz that called his assessment of the situation "inaccurate, not true, buuulllshiiit."

"Everything in the government is either mandatory or discretionary spending, depending on which bucket they feel like putting it in," Stewart said. "The whole place is basically a fucking shell game, and he's pretending that this is some new thing that the Democrats pulled out, stuck into the bill and snuck it past Ted Cruz. Now I'm not a big-city, Harvard-educated lawyer, but I can read. It's always been mandatory spending. ... No trick, no gimmick, been there the whole fucking time."

A quick read of the bill's history on Congress.gov shows there have been 55 amendments to the bill on its trip from the House to the Senate but nothing to the level of Copperfield-ian trickery that Cruz alleged to TMZ. Cruz should know this — unless he didn't read the bill at all — because he was one of the 84 senators who helped pass the bill in June, according to congressional records.

Frankly, there is no apology and there is no excuse anyone can give for Cruz anymore. He's holding up a bill over a nonexistent problem that would improve and save lives of the same service members he claims every election cycle deserve our utmost respect and support.

At least appendixes can be surgically removed.
KEEP THE DALLAS OBSERVER FREE... Since we started the Dallas Observer, it has been defined as the free, independent voice of Dallas, and we'd like to keep it that way. With local media under siege, it's more important than ever for us to rally support behind funding our local journalism. You can help by participating in our "I Support" program, allowing us to keep offering readers access to our incisive coverage of local news, food and culture with no paywalls.
Make a one-time donation today for as little as $1.