Major Retailers Have a History of Copying Designs, as Dallas Artists Are Learning Firsthand

Charles Smith II heard his designs were rocking on Instagram (left), but when he checked out the pictures, he realized the clothes weren't his (right) — but the concept was. Courtesy Charles Smith II
The original artwork or designs of at least two Dallas designers have been copied by big-box clothing giants as recently as early this year. Charles Smith II’s “Do Not Touch” line is the latest to be imitated by mega-retailer Forever 21, which along with Zara and H&M, is one of the most notorious copycats.

Smith became aware of the situation earlier this month after people started congratulating him on the exposure for his “Do Not Touch” line. Rosa Acosta, a model and video vixen with 1.3 million Instagram followers, was seen wearing a sports bra emblazoned with the wording “Do Not Touch” in one of her Instagram videos — except when Smith went to check it out, the clothes weren’t his.

The slogan is the same. The sports bra design is similar, but the lettering was off. It’s in a different font than Smith uses.

Labels copying other labels is so common that Kendall and Kylie Jenner were also in the news this month for producing a sandal similar to one designed by Chanel. In fact, Shop Art Theft is an entire website dedicated to indie designers being imitated by big-box retailers. And it’s not just small designers whose original work is replicated by fashion giants. In 2015, Yves Saint Laurent released a pussy bow lipstick-print mini dress that copied a Forever 21 design introduced in 2013.

Mary Dauterman is one of those indie designers whose work was copied by PacSun. She’s a freelance illustrator and art director from Dallas who’s now based in Brooklyn, and she runs her own Etsy shop, where she sells her designs.

One of her Etsy customers sent her a picture of one of her pins that PacSun had imitated – a design with the word “UGH” in all capital letters. It matched Dauterman’s design exactly.

“I submitted it to Shop Art Theft ... posted [it] on Facebook… and asked my friends for legal advice. Everyone said to file for a copyright and I could try to take it to court, but it may be costly. One friend noted PacSun has filed for bankruptcy so it may not be worth pursuing.”

Neither PacSun nor Forever 21 responded to the Observer’s requests for comment.

Dauterman went so far as to file for copyright protection through a government website, but fashion isn’t protected in the same way as other intellectual property. 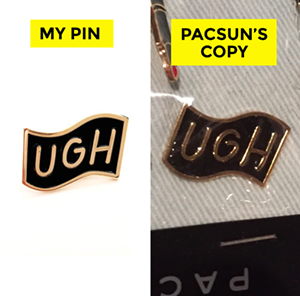 “What can never be copyrighted is anything that is functional…One hundred years ago, the U.S. Copyright Office made a decision that all fashion is functional — all clothing, no matter how fanciful, how elaborate. You wouldn’t clean a house in a ballgown, but nevertheless, it can’t be subject to copyright,” Susan Scafidi told Fashionista in an article on fashion copyrights. She founded the Fashion Law Institute, and is a pioneer in the field of fashion law.

“I do feel pretty powerless. There isn’t a system in place to protect your work as an individual, so I guess I’ll just hope more people who like the design will want to buy from me directly,” Dauterman says.

Smith is consulting with his family’s lawyer about how to proceed.

“The only thing I can come at them with is the timing,” Smith says. “It’s not even the design and the phrase itself — it was a simple phrase that no one ever did anything with. … When I got ahold of it and redefined and reinterpreted it to make it mean something and put the symbolism behind ‘Do Not Touch’ is when it became attractive.”

If he has a case, he at least has the evidence to back it up: time-stamped invoices for orders showing he was selling his “Do Not Touch” line before Forever 21 had it on its shelves. Smith is hoping to win an actual court case to make an impression on the retailer, but fast fashion giants like Forever 21 often end up settling out of court.

In 2011, Jezebel reported that Forever 21 had been sued more than 50 times by labels as illustrious as Anna Sui and Diane von Furstenberg for “allegedly stealing the work of other designers and passing it off as their own." Despite this long legal history, the chain has never lost one of these cases in court.

In fact, only once, in a case brought by the label Trovata, did the dispute even result in a trial. That ended in a hung jury; a lone holdout took the chain’s side. Forever 21 settled on the eve of the retrial.

“I wouldn’t settle even if they offered that to me. It’s not about the money,” Smith says. “It’s about the moral principle. As designers, people who create, our ideas are worth something. What makes me even more upset is that these big companies do collaborations with influencers and celebrities all the time. All they had to do is give me a call. The thing is they don’t do collaborations with designers.”

All of this has understandably soured Smith’s impression of the retailer. While deciding what legal action to take, Smith took to social media to publicly call out Forever 21. He’s hoping that his large network will boycott the store, thereby influencing Forever 21’s bottom line.

“At first I was just going to handle it legally. They think designers aren’t smart enough to understand the inexpensive way to come about getting results, like social media and the press. I’m beginning the process by humiliating them and making people see them for what they really are,” Smith says. “Of course it pisses me off, but I’m a person that understands how to keep my cool even in these situations. You’ve got to think level headed to get a result.”