Gosh! The Texas Theatre Will Screen Napoleon Dynamite With 3 of the Original Cast 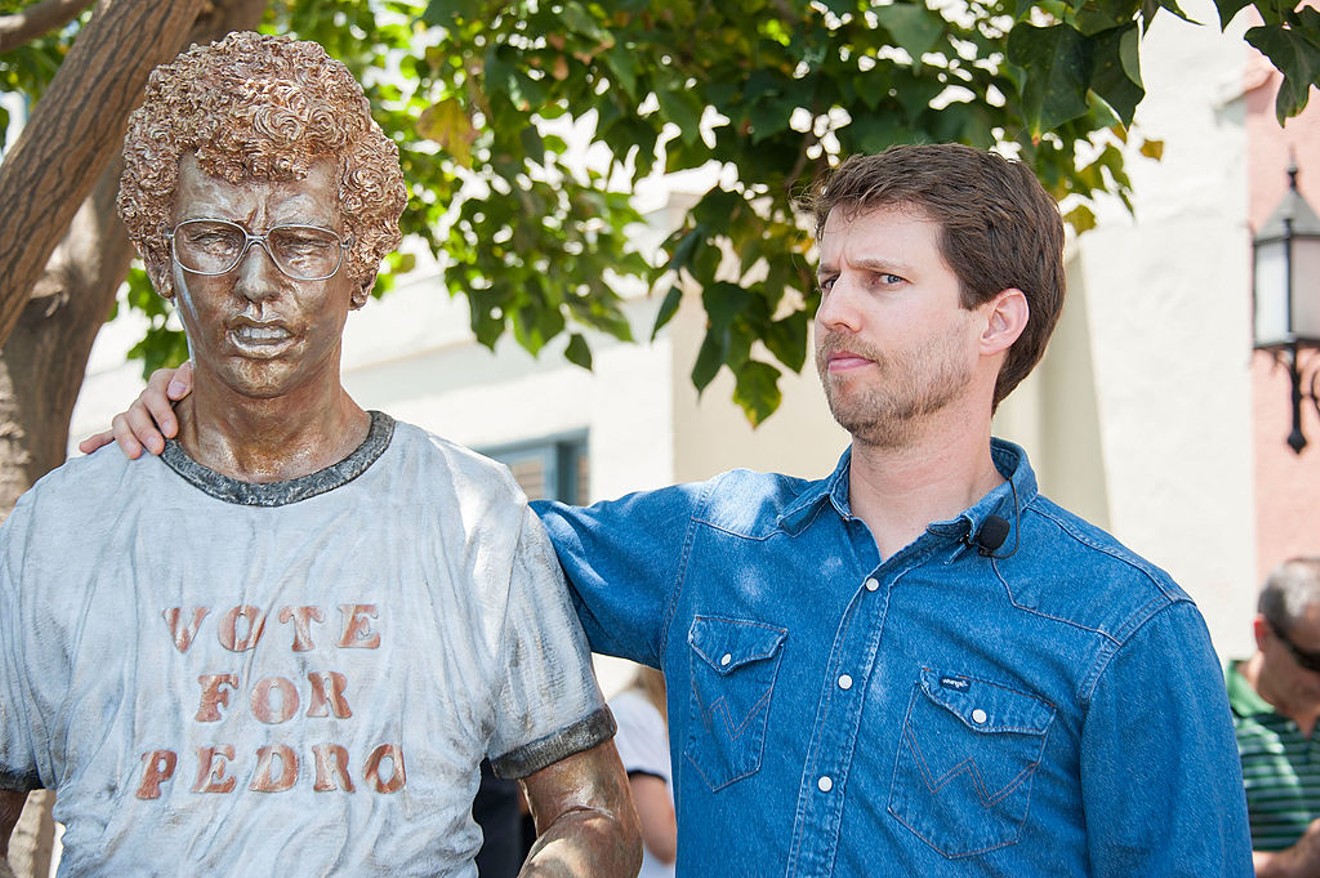 Actor Jon Heder with a statue of his character from Napoleon Dynamite at the Fox Studio lot in 2014. Valerie Macon/Getty Images
One of the most awkward teen movies about one of the world's most awkward teens of all time is getting a special screening next year at the Texas Theatre.

Jon Heder, Efren Ramirez and Jon Gries will appear at the Oak Cliff movie house on April 1 for a special screening of the cult comedy Napoleon Dynamite, according to a joint announcement from the Texas Theatre and the AT&T Performing Arts Center.

The screening will have a live Q&A session with Heder, Ramirez and Gries, who respectively played the title character, Napoleon's friend Pedro and Napoleon's Uncle Rico in the sleeper indie hit from 2004, which Hess directed.

Tickets will go on sale starting on Friday. VIP passes will also be available to purchase a seat in the first 10 rows of the theater that will also give holders access to a special meet-and-greet with the screening's guests and an autographed movie poster.

Hess wrote Napoleon Dynamite with his wife, Jerusha Hess. It was based on a short black and white film called Peluca that he made two years earlier while studying film at Brigham Young University. Heder played the Napoleon  Dynamite character, who tries to buy a wig for one of his high school friends who shaves off all of his hair because "it made his head real hot." It's basically a foundation for the Napoleon Dynamite universe.  The 2004 film that expanded on Peluca got a screening at that year's Sundance Film Festival, where it became one of the most talked-about films of the independent film festival. Fox Searchlight Pictures and MTV Films inked a deal to distribute the film the following summer, and it became one of the year's biggest sleeper hits, according to an oral history of the film published in The Deseret News.

Hess based events of the film on his own life about a super awkward teen who wears nondescript T-shirts and snow boots in a small rural town. He lives with his Uncle Rico and his bratty older brother Kip (Aaron Ruell) and is raised by his grandmother (Sandy Martin).

Some studio heads suggested adding some big names to the cast to help boost its earnings potential. According to The Deseret News, a casting director suggested replacing Heder with Jake Gyllenhaal, but Hess insisted that Heder was the only actor who could play Napoleon Dynamite, calling the move "creatively, a dealbreaker. It was a role Jon was born to play."

The film shows the boring life he actually leads, as the character constantly tries to liven up his existence with his love for mythical hybrid animals, obtaining ninja skills and going on fictitious trips to Alaska to shoot 50 wolverines with "a freaking 12-gauge, what do you think?"

He becomes friends with a fellow student named Pedro, who decides to undertake a futile attempt to run for class president in the most awkward means possible, and a shy, ambitious girl named Deb (Tina Majorino). Dynamite's Uncle Rico, who brags about his high school football days while pursuing fruitless, get-rich quick schemes, consistently finds ways to interfere with Napoleon's life.

The film became the basis for a 2010 animated series on Fox with voices of all the principal cast, including Diedrich Bader as the town's hand-to-hand dojo combat master Rex. There's also been talk from cast members Ramirez and Heder about a possible sequel.