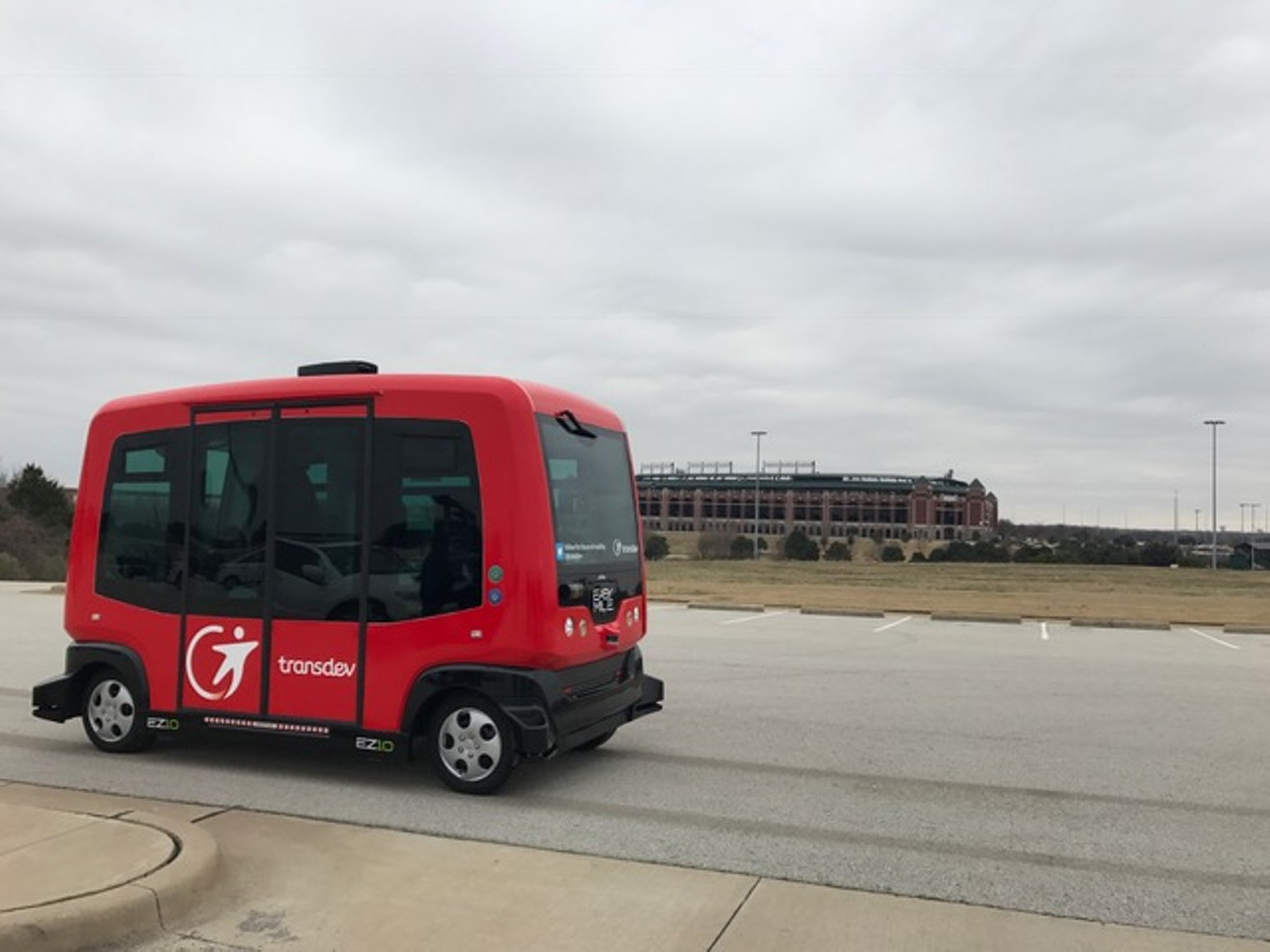 Arlington is among the first stops on a cross-country tour promoting the EasyMile EZ10, a driverless shuttle that can reach speeds of up to 35 mph. Karen Gavis
Not long ago, a driverless car would have made for a good ghost story — perhaps a modern-day twist on the Headless Horseman. But not a single mouth gaped open last Thursday as a crowd of people pooled atop a hill near Arlington Convention Center to take a spin in one.

The boxy, slow-moving, red vehicle, called the EasyMile EZ10, is the latest in driverless technology. Two black tire tracks marked its short route down and back up the hill. However they weren't made by the EasyMile, since it poked along at less than 10 mph.

The rep who rode with us said the car, which can be controlled remotely, can actually work up to a speed of 35 mph but is not made for freeways. A Mustang it was not.

The EasyMile was more like a Fred Flintstone-esque, side-moving elevator with cushioned seats. Upon arrival, the doors opened automatically to seat a party of six. Once inside, there were two enormous buttons: one green and one red. The rep pushed the green one and away we went, guided by object-detecting sensors.

Along the way, the rep informed us how the self-driving shuttle uses GPS and other technologies to map a specific route which can be identically and continually repeated. Arlington is among the first stops on a cross-country tour promotion of the autonomous shuttle, which an EZ10 press release says aims to introduce people to the benefits of self-driving vehicle technology, including increased safety and freedom.

Arlington Mayor Jeff Williams says driverless technology is coming, and he envisions it to have the same impact on society as the arrival of the cell phone. “At some point, all of the automobile manufacturers will be producing them. I think it’s the wave of the future.”

Williams was initially apprehensive about giving a car with no driver, steering wheel or brakes a shot, but he’s more open minded since he watched a cameraman get close to the moving vehicle, and it stopped automatically. Overall he was impressed by the smooth, quiet ride. “It’s a new day in transportation.”

Williams says Arlington is the perfect place to demonstrate the product because of its applications for transportation to and from entertainment venues such as Globe Life Park, AT&T Stadium and Six Flags. He is particularly interested in the larger models, which will hold 20 to 25 passengers. Arlington has a 30-member citizen transportation committee that will be arriving at a conclusion soon on how to address the city’s transportation needs, he says.

But while Williams is now open to driverless cars as a cheaper and safer means of transportation, others remain unconvinced. Arlington resident Lisa Whiskin, an Uber driver who has been making extra cash driving for the company for about six months, says she wouldn’t trust a computer-programmed vehicle with no driver. “I wouldn’t feel safe in a driverless car. There could be a glitch and you’re done.”

Lamar High School student Quentin Brown says he uses the app Lyft three or four times a week to catch a ride home from work or to his girlfriend’s house on the weekends. He would prefer to stick with his current system for social reasons. “Nine out of 10 times you get a really cool driver who makes the experience better,” he says. “So without the human driver the ride would be rather dull.”

Whiskin isn’t too concerned about losing out in the job market to driverless vehicles anytime soon. “I think it’s a long [way off],” she says.