Jake Moore and Ji Young Moore are among the fans who still play "Pokémon Go." Karen Gavis
It’s been a year since "Pokémon Go" sent gamers scrambling to collect virtual creatures all over Dallas, and the app is still providing entrepreneurs opportunities to cash in. An Austin-based company called Pokémon Go City Tours recently expanded to Dallas and Arlington.

The startup’s founder is 27-year-old Austin resident Phil Loyd. He describes his concept as a mesh of a traditional city tour and a Pokémon hunt and says it became more popular after last month’s Pokémon Go Fest in Chicago. "It just blew up," he says.

Loyd's tours in Austin and Arlington recently began selling out, so he's started renting bigger buses. We recently joined a Sunday tour in Arlington. It was the second of two back-to-back tours, and there were 30 people on board the bus.  The tours have a festive atmosphere, with music playing and snacks and drinks on offer.


"If it wasn't for the game, it's not like I'm going to go talk to strangers." – "Pokémon Go" player Stacey Robledo

One hunter, Stacey Robledo, stood outside Gander Mountain in Arlington with her 7-year-old niece, Vianney, waiting for the bus to arrive. It was Robledo's first time on a "Pokémon Go" party bus. The 27-year-old from Fort Worth started playing the game last year and has reached level 30. She says she likes meeting and interacting with new people through the game.

“If it wasn’t for the game, it’s not like I’m going to go talk to strangers,” she says.

Many gamers on the tour wore vintage Pokémon T-shirts. One man, Jesus Raya of Dallas, says he and his girlfriend often drive around the Dallas area with friends playing the game. They hunted Pokémon in Los Angeles a few weeks ago.

“It’s just a fun distraction,” he says. “This is the first time I’ve had the opportunity to check out this bus thing.”
click to enlarge 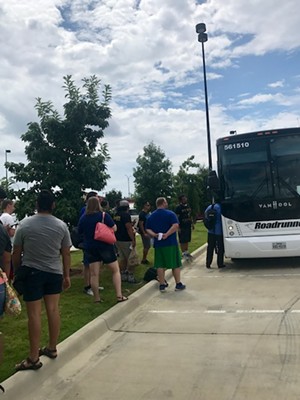 The bus caters to experienced players like Raya, who has reached level 35 in the game. Loyd says novices unfamiliar with terms such as "raid balls" and "dealing out damagae" are welcome, but they may have a hard time catching anything.

Loyd says he's made a career out of high-growth, no-budget startups; video; marketing; and web design, but Pokémon Go City Tours is his favorite project.

”If I could just do this, I would,” he says. “Everybody’s excited about it. And it’s really hard to catch.”

He realizes that the demand for his service may decline someday. Last year, everyone was playing Pokémon Go; now it's hardcore gamers. “They’re all in Facebook groups or in discord channels,” he says, “and they're very well connected.”

That's why he's come up with a foolproof business model in which he refunds customers' money if too few people sign up for a tour for him to break even. He says he can justify a trip once the bus is about half full.