Local Russian Businesses Say They're Being Unfairly Targeted Because of Putin 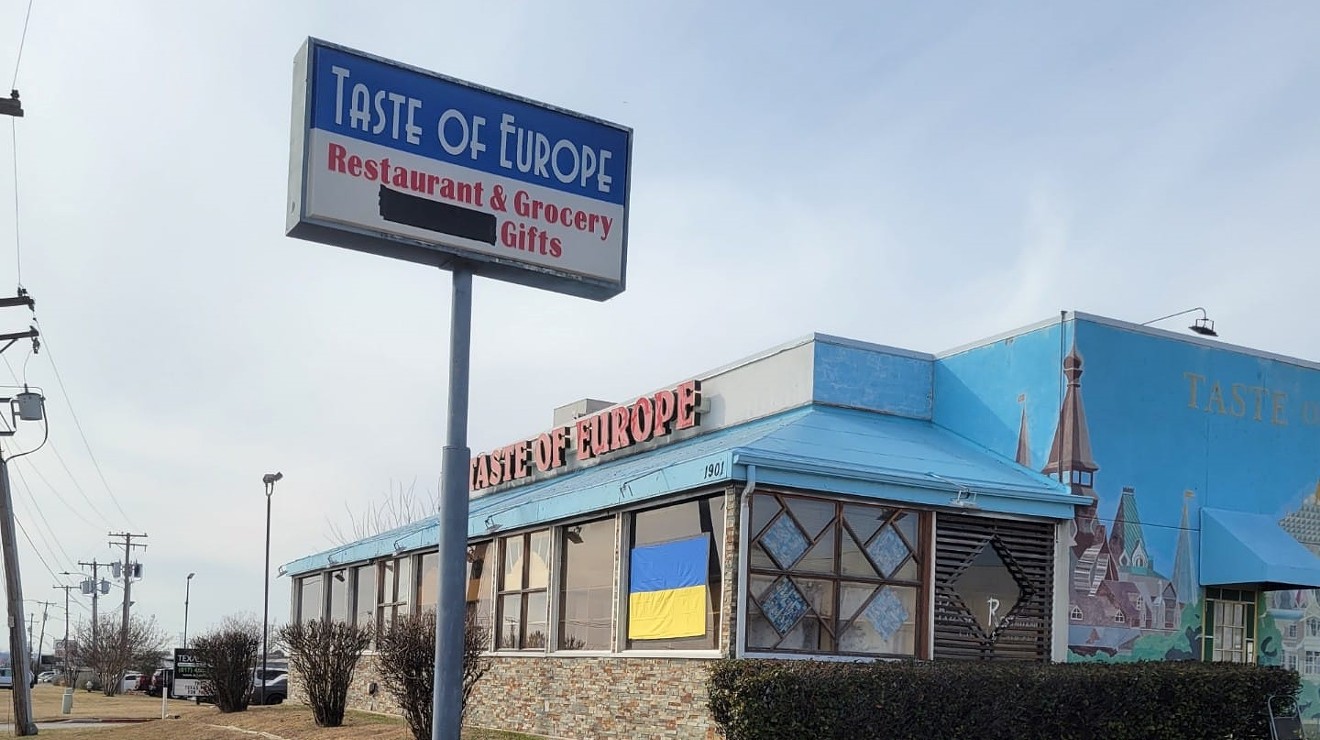 The Taste of Europe restaurant and grocery store in Arlington had to tape over the "Russian" in their sign because of an influx of negative calls, emails and reviews from misguided people. courtesy A Taste of Europe Restaurant and Grocery Store
A little over a week ago, the Russian Banya of Carrollton restaurant got a one-star review on Google completely out of the blue.

A single negative online review might not sound eventful for a thriving restaurant with a loyal customer base, but the problem is that the Russian Banya hasn't been open since last summer, says owner Michael Uspenski.

"We received a negative, one-star review from a Russian customer, I believe," Uspenski says. "So this was because of my support of Ukraine."

Since Russian President Vladimir Putin launched a vicious invasion of Ukraine on Feb. 24, Texas businesses and their customers have been cutting direct and indirect ties to Russian products and services. Bars and restaurants have stopped stocking shelves with Russian vodka. The Russian Ballet Theatre shortened its name to its acronym RBT ahead of its scheduled performance at The Majestic in a lengthy statement calling for peace and reminding audiences the ensemble comprises natives of many countries.

"We are a living example of unity, having nine different nations together on one stage creating beauty, not destroying it," the statement reads. "We are grateful to all kind words of support extended to our dancers, whose families are currently in danger. We dance for peace."

Some local businesses that offer Russian goods or services, however, have been targeted by people who don't understand what they do, where they stand or even of basic geography.

"A lot of our stuff is not even from Russia," says Valentin Tsalko, the owner of A Taste of Europe Restaurant and Grocery Store in Arlington.

Tsalko says in the days following the invasion, his business, which has been featured on The Food Network's Diners, Drive-ins and Dives, started getting several negative calls from private numbers and inaccurate Yelp reviews of his establishment with "very absurd remarks like Putin has secret meetings in my restaurant."

Well this is a first. Someone on #Yelp posting hate speech on European restaurants. Taste of Europe is in Dallas and is an awesome restaurant. I reported both of his reviews to Yelp, but @Yelp @yelpdallas I’m happy to DM you the link to his profile for swifter takedown 🙃 pic.twitter.com/IxrCETazBH


Even though Tsalko's restaurant serves dishes native to nations across Eastern Europe and not just Russia, the negative reviews have prompted Tsalko to make it clear where he stands. Much of the attention on the business was due to the word "Russian" appearing on the sign. The restaurant has since covered over that part of the sign and this even became a trending topic on Twitter.

"There were threats," Tsalko says. "They've died down a little bit, but Twitter has blown up a little bit with people not believing our side of the story. An employee showed me the comment thread going back and forth."

Realtor Irina Norcross of Frisco, who offers help for house hunters who speak Russian, says she's heard from colleagues who encountered clients who didn't want to work with them because they speak Russian and incorrectly assume they support the Russian government.

Anti-war protests have popped up across Russia and the world led by activists. Just last week in Dallas, Pussy Riot founder Nadya Tolokonnikova played two politically charged shows in Deep Ellum. A recent protest in Moscow was so large that it ended with more than 4,300 in arrests.

"To be Russian doesn't mean I support the war," Norcross says. "No, of course not. I'm against the war. I don't like the politics in Russia."

Signs of support for Ukraine have popped up all over North Texas, from city landmarks to individual establishments. The lights of the Omni Hotel and Reunion Tower in downtown Dallas changed to blue and yellow in honor of Ukraine's flags. AirBnb announced a new initiative to provide shelter for people and their families for free to refugees. Tsalko's restaurant posted a Ukrainian flag in the waiting area with the words "Stop war" on it.

Uspenski says it's myopic to think that just because a person comes from or has family in a certain part of the world means they also support that government's actions and policies.

"I strongly support Ukraine," Uspenski says. "I stand with them, and I'm firmly against Putin's aggression on Ukraine. I love Ukraine. I have relatives in the Ukraine, and I love Russia, but I still do not support this kind of aggression."

Tsalko says several members of his staff and customer community have relatives in the Ukraine and in the Eastern European regions that are taking in refugees. He says the events of the last few weeks have an affect on all of them.

"We try to be in contact with them regularly," he says of his family. "Everything's been OK so far because they are a little ways away from the war site and we try to keep up with them daily."

Tsalko says he's taken this opportunity to better educate his customers and community not just on the food they serve that comes from Russia and surrounding countries but also on Dallas' growing Russian and Ukrainian communities.

"We've just been more specific about where some of our dishes are from and explaining to people where the countries are," Tsalko says. "The misinformation and now the exposure is coming up so people are getting more informed, which helps a lot."
KEEP THE DALLAS OBSERVER FREE... Since we started the Dallas Observer, it has been defined as the free, independent voice of Dallas, and we'd like to keep it that way. With local media under siege, it's more important than ever for us to rally support behind funding our local journalism. You can help by participating in our "I Support" program, allowing us to keep offering readers access to our incisive coverage of local news, food and culture with no paywalls.
Make a one-time donation today for as little as $1.