Public Works Dallas' The Tempest Was a Big, Beautiful Jumble, Just Like Dallas 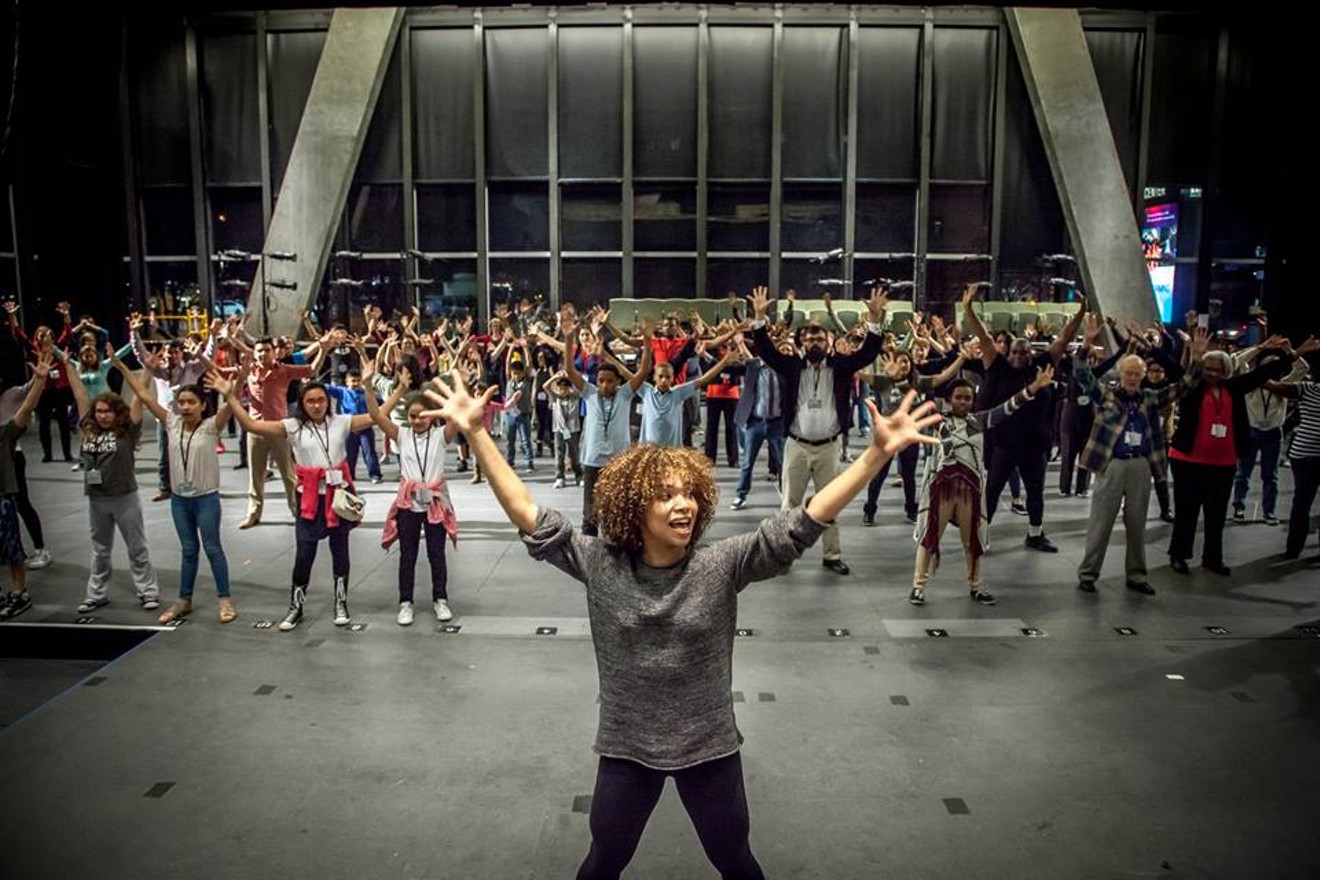 Rehearsals for The Tempest via The Dallas Theater Center on Facebook
It’s hard to review a production as huge as Public Works Dallas’ The Tempest, which featured 200 Dallasites in the cast and five professional actors. On the one hand, you had the play: lights, music, acting, words, dancing, chaos. And there was chaos. The Friday premiere was a gorgeous mess at times.

But on the other hand, Public Works — an offshoot of the New York Public Theater program that recruits non-actors for Shakespeare productions — was about a group of people coming together simply to commune with a work of art. In that regard, The Tempest was a success.

Before the play began, Mayor Mike Rawlings was spotted sitting casually on an aisle chatting with audience members, colorful, striped socks peeking out under his black suit. He was a member of the cast, granted, but it’s still something you don’t see very often at the theater.

Artistic Director Kevin Moriarty took the stage, the ringmaster, and laid before the crowd what was to unfold: an experiment. Something magical and important was coming. And then he announced that Public Works Dallas would become a permanent fixture at the theater center. The crowd cheered.

A wild musical number opened the play. Liz Mikel, our Ariel, appeared and summoned the waves. Behind a scrim, light shone upon a crowd of children dressed in blue, simulating the waves. The cuteness was almost too much to bear. A drumline appeared in the mezzanine seating, and the beat took on a life of its own.

Prospero, played by Broadway star Andre De Shields, began to explain to his daughter, a perfectly annoyed teen Miranda, played by featured ensemble member Trinity Hawkins, how they came to the island, and the wrongs he has suffered. These two outcasts set the scene for the island of misfits, a story of loneliness and longing.

As the shipwrecked Ferdinand appeared, Miranda eyed him coyly. The pair of teens playing the couple were so genuine it could not have been better cast. Hawkins was the stronger actor, but their dynamic was sharp: a lost, bewildered young man on an enchanted island, and the girl who is only enchanted by this newness of love and hope.

The Tempest was a good choice for a program that involved the community in such a way. The hundreds of cast members were utilized in inventive ways. They appeared as spirits on the island, and it never got old for Ariel to lead them, announcing, “We are invisible now, see!”

The play didn’t need to be a musical, but performances by the Big “D” Drumline from Townview High, Anita M. Martinez Ballet Folklorico, Northlake Elementary Wildcat Choir, Rickie Rush’s Living Sound Choir from Inspiring Body of Christ Church and Inner City All-Stars Brass Band all worked into the scenes quite well. Dark Circles Contemporary Dance Co. added a gorgeous layer to a scene with the young lovers on the island.

The Tempest was not a perfect play. “I’m not sure I know what that play was about,” we overheard one audience member saying as he was leaving. But that’s OK. It didn’t need to be perfect. It was a big, beautiful jumble at times, just like the city it represented.

A raucous wedding reception, officiated by Mayor Rawlings and featuring rapper/singer Sam Lao, had small children crashing about as she deftly navigated them in heels. It was nothing short of joyful and hilarious.

The professional actors shone. Alex Organ played a perfectly weird Caliban, whom Miranda accurately identified as her dad’s creepy friend. He was like a Gollum with mossy arms and ram horns. As Caliban led drunken Trinculo (Ace Anderson) and Stephano (Rodney Garza) around the island to murder his captor, Prospero, Organ captured all the sadness and desperation the servant monster embodies without losing the humor.

Non-professional actor Gordon Fox was another standout as Gonzalo. His delight in the magic of the island was precious.

It was Mikel who shone brightest as Ariel, however. Her easy speech made the language seem familiar. It was an interpretation suited to a cast and audience who may not be intimately familiar with Shakespeare’s works.

I’m admittedly a Shakespeare purist. I’ve never loved removing crucial text and replacing with song, something Moriarty has done before at DTC, but it really worked in this setting. Public Works’ The Tempest was a lush melting pot of song, dance and poetry and that made the mess rich and fun to watch.

“I’m just in awe,” Public Works founder Lear deBessonet said after the play. “It’s so faithful to the spirit of the city!” She seemed nearly breathless from hugging everyone sitting within a 10 foot radius of her.

Want to strip away the elitism from art and make it accessible to more people? This is one way: Two hundred people on stage, singing, playing instruments, becoming waves, sand and air and speaking this immortal poetry; people of every imaginable shade, shape and size joyfully celebrating art together made it hard to be a cynic.