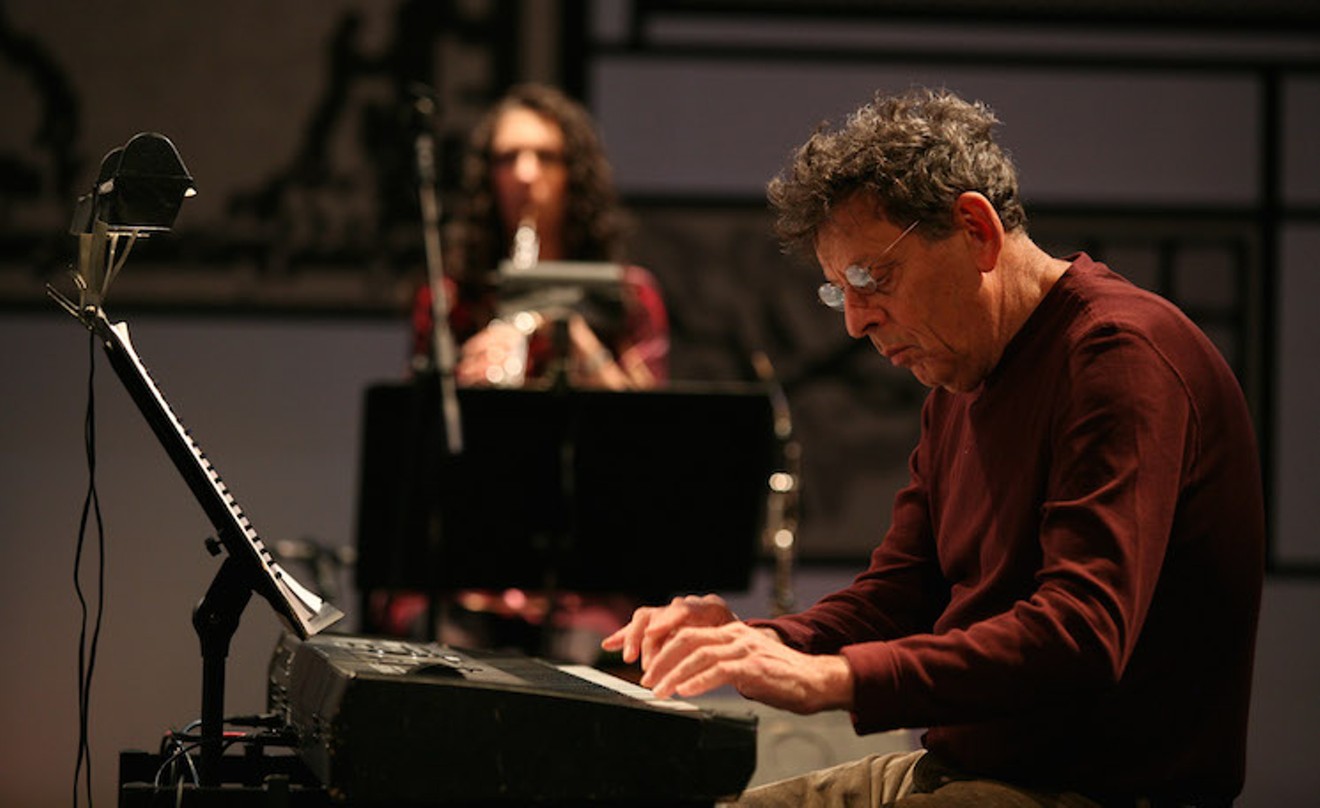 Philip Glass in 2008 Lelli e Masotti/Wikimedia Commons
Even compared to the grandeur and rapture that normally accompanies well-executed symphonies inside the Meyerson Symphony Center, Friday night felt exceptional. The Dallas Symphony Orchestra's program was divided into two portions — one a contemporary work, Philip Glass' Double Concerto for Two Pianos, and the other a towering classic, Anton Bruckner’s Eighth Symphony.

The Double Concerto was electrical in atmosphere, spare and desolate in tone. In its desert of spindly percussion and groaning drones, it offered a glimpse of art music's future — or one potential and thrilling version, anyway.

It displayed reverence for and understanding of past conventions while also rebelling against them. It wasn’t radical in an obvious way — like a Stockhausen, Schoenberg or Ligeti composition might be — but to see it live was exhilarating.

If the Double Concerto has a defining quality, it’s a sense of perpetual movement, an impression that you’re always headed to the next thing — to the next timbre, to the next emotion, to the next peak or valley. The music’s modular structure amplifies this phenomenon.


The performance was at times overwhelmingly beautiful. At others, this beauty was shot through with anxiety and despair.

The Double Concerto mostly moves along a forward trajectory where sounds are arranged in neat, sequential clusters, delivered one at a time. Each object is given ample space to breathe, like a collection of framed artworks hung in a gallery. This economical and eerily symmetrical approach made Friday’s performance feel soothing and also somewhat threatening.

After intermission, Bruckner's Eighth Symphony made its entrance, at first creaky and later thunderous. What motion is for the Double Concerto, flux is for Bruckner’s Eighth Symphony. It is animated principally by stark, sudden contrasts: between total silences and sublime crescendos, triumph and doom, tranquility and hellish tension.

The Eighth Symphony is celebrated for its lush maximalism, for its universe of a thousand moving parts. And that’s exactly how the DSO, under the command of Jaap van Zweden, played it. The performance was at times overwhelmingly beautiful. At others, this beauty was shot through with anxiety and despair. The harps glimmered, the brass blazed, the string section shrieked and the percussion’s most memorable moments weren’t drummed; they were detonated.

Tradeoffs defined Friday night’s performance. The orchestra was less taut and fiery for Glass, but the piece was somehow enhanced by this brittle, almost gaunt execution. The orchestra was in remarkable form for Bruckner — meticulous but organic, confident and bold — but the work didn’t take flight like the very finest Bruckner Eight performances (like, say, Karajan with the Vienna Philharmonic, 1988).

Still, it was nearly impossible to find fault with anything on Friday. It was one of those experiences where all the various pieces fall together, anticipation and expectation finally click, and something like magic occurs. When the performance ended, the audience, as if there were no other conceivable option, cheered for five minutes.

KEEP THE DALLAS OBSERVER FREE... Since we started the Dallas Observer, it has been defined as the free, independent voice of Dallas, and we'd like to keep it that way. With local media under siege, it's more important than ever for us to rally support behind funding our local journalism. You can help by participating in our "I Support" program, allowing us to keep offering readers access to our incisive coverage of local news, food and culture with no paywalls.
Make a one-time donation today for as little as $1.
Jonathan Patrick