"Still Life in a Landscape" (1915) by Pablo Picasso courtesy Meadows Museum
The new exhibit at the Meadows Museum is small, but it packs a punch. Picasso/Rivera: Still Life and the Precedence of Form comprises eight works by four Cubist masters — Juan Gris, Maria Blanchard, Pablo Picasso and Diego Rivera — and reveals how they influenced each other. In some cases, similarities were so strong that they started arguments among the group.

Rivera paid a visit to Picasso's studio in 1915, and when he saw an early version of "Seated Man" he thought it looked a lot like "Zapatista Landscape (The Guerilla)," which Rivera had painted earlier that year.

The exhibit focuses on parallels in the works of Picasso and Rivera, but one work by Gris ("Cubist Landscape, 1917") and one by Blanchard ("Femme Assise") are also present. All were done in the 1910s.

Picasso and Rivera first met in 1914, and according to notes in the gallery, Rivera soon “had a bone to pick with Picasso, whom he previously professed to revere."

Rivera visited Picasso's studio in 1915, and when he saw an early version of "Seated Man," he thought it looked a lot like "Zapatista Landscape (The Guerrilla)," which Rivera had painted earlier that year. 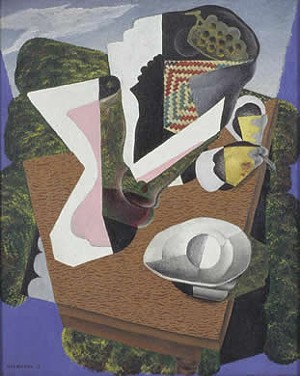 The green swirls and white wisps on a dark background led Rivera to accuse Picasso of plagiarism. Rivera frequently used the technique, called scumbling, to depict trees and clouds. Apparently, he considered it to be a proprietary innovation.

Other artists agreed with Rivera’s complaint. Some became paranoid and began refusing to admit other artists into their studios. Jean Cocteau, a friend of Picasso’s, recalled “one week when everybody was whispering and wondering who had stolen Rivera’s formula for painting trees by scumbling green on black."

The small exhibit exposes other common themes and motifs in Cubist art. All four artists took a page out of Henri Matisse's book, for example. Matisse originated the "open window" concept in 1905 with his painting "Open Window, Collioure." Picasso does his take in "Still Life in Front of a Window at Saint-Raphael," on display at the Meadows.

Unfortunately, Matisse's painting is absent. It would have been interesting to see these two paintings side by side to continue pondering the question of when appropriation becomes theft.

Picasso/Rivera: Still Life and the Precedence of Form, through Nov. 5, Meadows Museum, 5900 Bishop Blvd., $4 to $12, meadowsmuseumdallas.org.