She Kills Monsters Feels Like Your High School Reunion 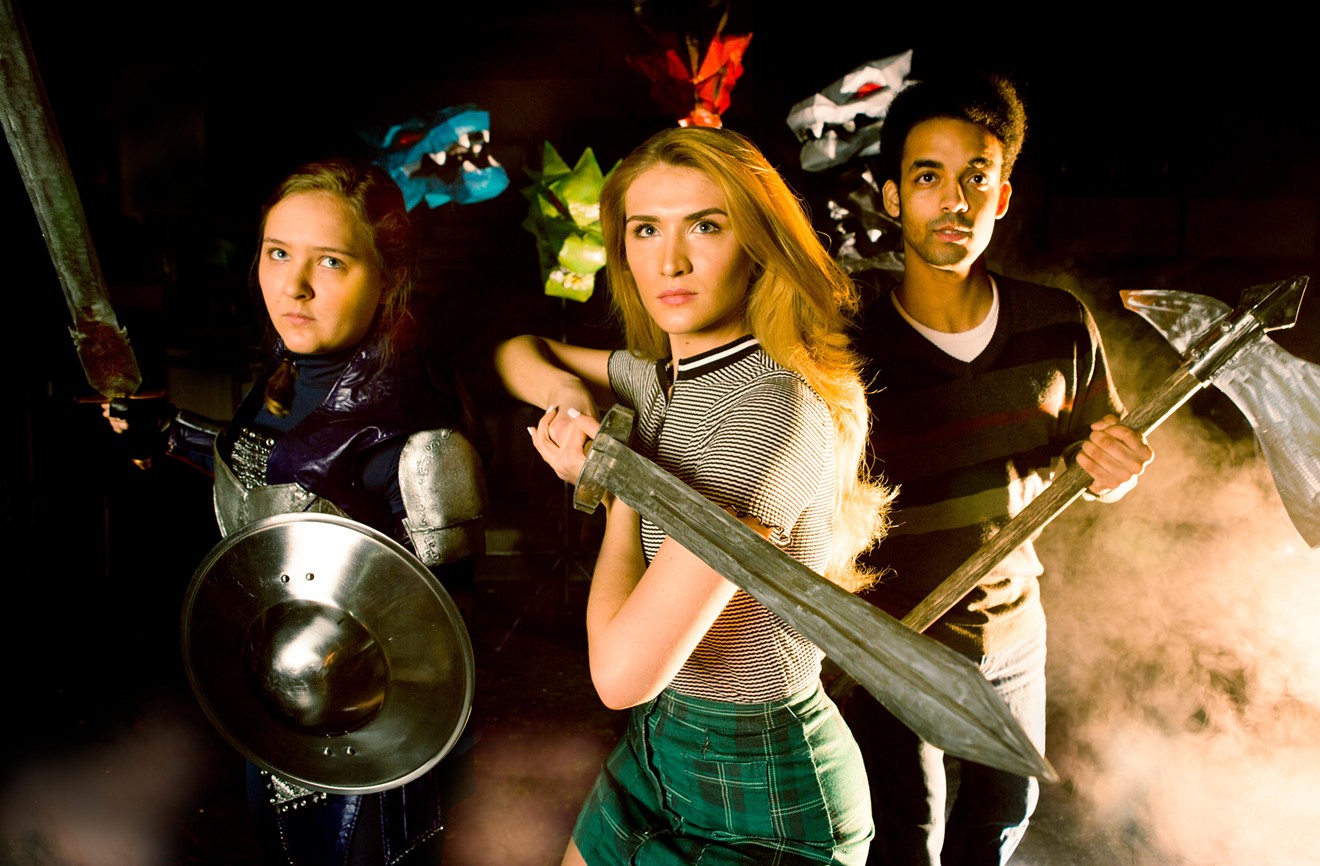 She Kills Monsters runs through April 1 at Theatre Three. courtesy Theatre Three
After the Gamergate controversy in 2014, the harsh realities of being a female nerd became the topic of endless think pieces. The harassment campaigns targeting women made it easy to spot issues of misogyny in video game culture, but what about more subtle, everyday name-calling or exclusion?

Even in the age of a female Doctor Who, a plethora of female Star Wars characters and oversized glasses made trendy (thanks to Warby Parker and Zooey Deschanel), it’s hard out there for a geeky girl. Which, of course, isn’t to say it’s easy to be a geeky guy, either. Let’s be honest: Being a teenager isn’t easy for anyone. But She Kills Monsters, onstage at Theatre Three through April 1, takes place decades before being nerdy became even as cool as it is today.

Playwright Qui Nguyen’s 2011 play tells the story of Agnes Evans (Bree Redmond), a young teacher who lost her parents and her teenage sister, Tilly (Kennedy Waterman), in a car crash two years ago. When the audience meets her, she’s finally cleaning out the house and preparing to move in with her longtime boyfriend when she stumbles upon Tilly’s notebook.

The pages contain a D&D campaign. Tilly, it seems, was one of the most respected Dungeon Masters in town. (Note for non-nerds: a Dungeon Master is the storyteller and arbiter who rolls the eight-sided dice and keeps the game moving forward.)

When Agnes decides to play Tilly’s game, she sets out on an adventure into her younger sister’s world, one filled with bullies, lesbians and really good friends.

For anyone who grew up in the late '80s or early '90s, this play feels like showing up to your high school reunion in the school cafeteria. The story of an older, popular sister who takes her dorky, younger sister for granted until it’s too late is the subject of any number of movies from the late 20th century. Then there’s the array of pop-culture references (Quantum Leap) and musical interludes. Yet there’s a special kind of magic to a play that can balance sincerity with hearty laughter.

Under Jeffrey Schmidt and Katy Tye’s direction, the ensemble animates both the world of the game and the halls of the high school. In one scene, Bear Campbell plays Lilith, Demon Queen girlfriend of Tillius the Paladin; a scene later, she’s a sheepish high school student popping in to see the guidance counselor, Vera (a delightful Lydia Mackay).

She Kills Monsters is a welcome reminder that theater is a fun way to spend an evening. And it doesn’t hurt that you get to watch a group of nerdy women slay dragons.

Tickets are $10 and up at theatre3dallas.com.

KEEP THE DALLAS OBSERVER FREE... Since we started the Dallas Observer, it has been defined as the free, independent voice of Dallas, and we'd like to keep it that way. With local media under siege, it's more important than ever for us to rally support behind funding our local journalism. You can help by participating in our "I Support" program, allowing us to keep offering readers access to our incisive coverage of local news, food and culture with no paywalls.
Make a one-time donation today for as little as $1.
Lauren Smart
Contact: Lauren Smart