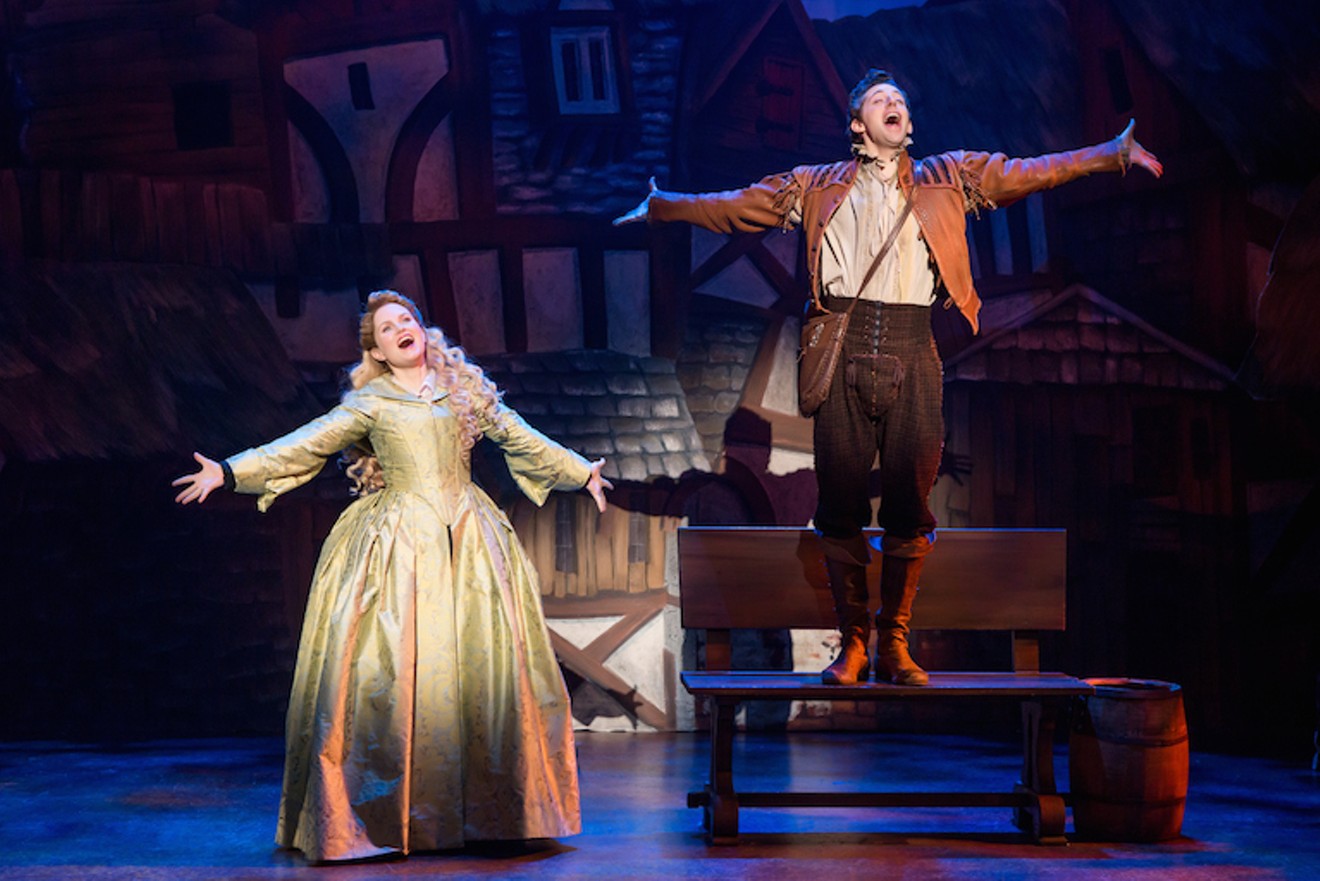 Google “baby brain.” That’s a real thing that happens where your kids suck all of your mental energy. When you're growing or managing a small human you often forget to do simple things like wear matching shoes in public.

Now take your baby brain and memorize lines, sing and dance on stage every night, and do it with a smile. Then you have Autumn Hurlbert, an actress who is doing all of those things and more. Hurlbert is on the national tour of the Broadway hit Something Rotten, and she's brought her 2-year-old son, Lincoln, along for the epic trip.


Now take your baby brain and memorize lines, sing and dance on stage every night, and do it with a smile.

Something Rotten, which opened on Broadway in 2015 but is set in 1595, is the story of two brothers who hate William Shakespeare and are on a mission to discover the next big thing in the theater world. They get a hot tip that it’s musicals, and despite not knowing what that means, they set off to make it happen. Every name, every character, every reference is a nod to musical theater, and each character has a Shakespearean name.

By day, Hurlbert feeds Lincoln homemade food, gets him down for naps and maintains a consistent bedtime routine. By night, she plays the role of Portia, whose name is a reference to the heroine in Shakespeare's The Merchant of Venice.

Hurlbert, her husband, and their son are self-proclaimed theater gypsies. Hurlbert had just given birth to Lincoln when she saw the original Broadway production of Something Rotten.

She loved it, but she was just beginning to dip her toes back in the theater waters again. The role of Portia, a love interest of one of the brothers, immediately jumped out at her. And it wasn’t just Hurlbert who took notice; friends also told her she had to play the part.

A well-placed call to her agent landed her an audition and a spot in the first national touring company. Then the panic set in. After getting the good news, she says, she asked herself, “What have we done?”

Armed with support and advice, Hurlbert and her husband, a psychologist, gave up their tiny apartment on the Upper West Side of New York City and hit the road.

courtesy Autumn Hurlbert
She says the experience has exceeded every expectation. She's found that she’s not alone. Another ensemble member on the tour is also traveling with his wife and two toddlers. When they are all together, it’s like “toddler town,” Hurlbert says.

The Something Rotten community inspires her, she says.

“Traveling with a baby means a lot of luggage. Everyone is always helping out. It’s such a loving environment,” Hurlbert says.

And that extends to the play itself. Hurlbert says it's like a puppy.

“No matter what mood you’re in, when you start getting ready to do this show, you just get happy."

It helps that the production and her family have both been very accommodating of her needs. She's able to trade out hotel rooms for Airbnb homes, and she has a “stay-at-hotel daddy” and a toddler with the flexibility to sleep in a walk-in closet when needed. As soon as it’s not working anymore, they will reevaluate the situation.

“There’s always obstacles you face as a parent," she says. "If this becomes one, we will always do what’s best for Lincoln.”

Two weeks ago, Lincoln watched his mom perform in Something Rotten for the first time.

“He sat through the entire thing," Hurlbert says, adding that he now recognizes the cast members from the production poster and isn’t phased at all by seeing his mom in costume. "Two hours!”

Plus, there are perks to being a kid with a Broadway mom. On Lincoln's birthday, the entire touring company of Something Rotten sang him “Happy Birthday."