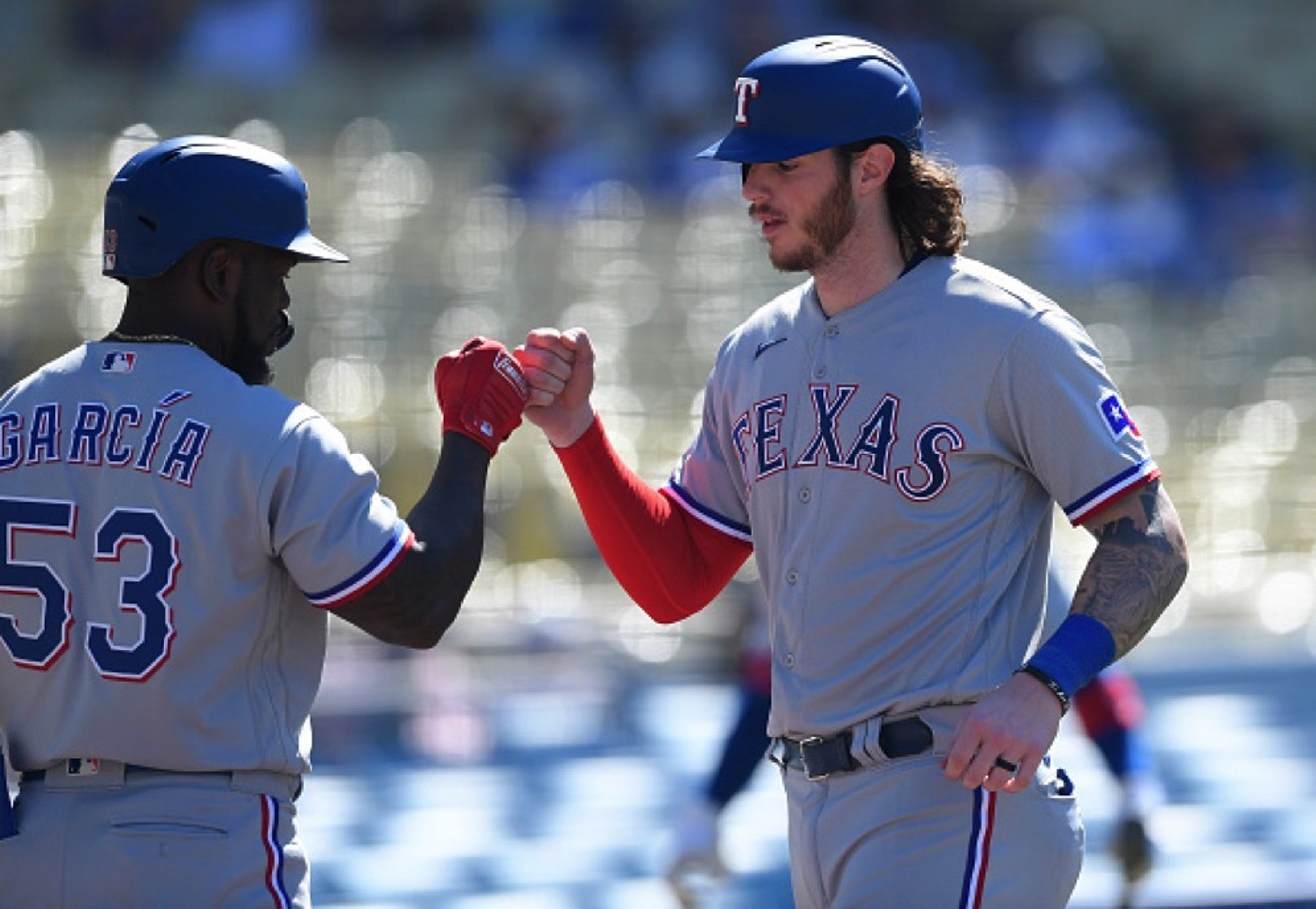 In case you missed any Rangers news, here's a recap. Kevork Djansezian/Getty Images
Summer has come and passed, the management can never last.

August was certainly a challenging month for the Rangers, and so far September isn't shaping up so hot either. To paraphrase Taylor Swift, the summer has slipped away like a bottle of wine, but the emergence of new issues thankfully comes with a bevy of possible solutions as well.

Tip My Hat to the New Constitution … Yadda, Yadda … We Don’t Get Fooled Again
Obviously, the biggest development in Rangerworld has been the one-two punch of the firings of manager Chris Woodward on Aug. 15 and of president of baseball operations Jon Daniels two days later. Serving as interim manager for the remainder of the season is third base coach Tony Beasley, and absorbing Daniels’ role is general manager Chris Young.

The Beasley administration is operating on the following platform: A fixed first six batters in the lineup with variation to only (mostly) the bottom three. Starting pitchers must go beyond five innings with an avoidance of “noncompetitive pitches.” “A walk is worse than a hit,” Beasley told The Dallas Morning News on Aug. 31. He has gone on record saying that he intends to manage with a semi-old-school approach that balances Woodward’s faith in analytics with good ol’ fashioned faith in the game itself. As opposed to snarling a la George in A Clockwork Orange —  “It’s part of the new way!” — Beasley says that his style of management will not radically deviate from what worked in Woody’s playbook but won’t follow it word-for-word either.

We Need to Talk About Seager (and Semien, Kind of)
The following needs to be stated before we discuss the issue at hand: The Texas Rangers spent half a billion dollars on a new middle infield that's intended to last the better part of a decade. Shortstop Corey Seager and second baseman Marcus Semien have been offensively revelatory in their debut season, with Seager hitting a new career-high of 29 home runs (and counting), Semien enjoying the first 20-20 season of his career (20 homers, 20 stolen bases) and more than 130 RBIs between the two of them.

However, a disturbing pattern has emerged: It appears that Corey Seager and Marcus Semien have difficulty completing double plays.

At the moment, Seager already has 16 errors this season, two shy of the season-high 18 errors he committed in 2016 as a rookie. That’s approximately an error every eight games. It’s one thing to commit errors that are inconsequential, but it’s another thing when those errors can potentially cost the Rangers games. This is no better exemplified than the last week of August, particularly on Aug. 23 at Coors Field in Colorado:

The Rangers took an immediate 3-0 lead in the top of the first via a Semien homer, a Seager single, and a Lowe homer. The Rockies responded in the 2nd. A C.J. Cron single was followed by a Jose Iglesias ground out that could have easily been turned into a double play by Seager and Semien. Instead it resulted in Cron out at second but Iglesias beating out Semien’s throw. No double play — would it come back to haunt them? Next, Randal Grichuk was hit by a pitch, and then with two men on, Elias Diaz homered to tie the game at 3. Productive at-bats by Bubba Thompson, Semien, Seager, Lowe, and Adolis Garcia resulted in the Rangers retaking the lead 6-3, later cut to 6-4 by an RBI single by Chalie Blackmon. Decent enough, right?

In the bottom of the 7th, a fielding error by Seager resulted in Wynton Bernard making it to first base unscathed. The following batter, Ryan McMahon, grounded into another potential double play that once again resulted in an out at second and the batter reaching first base safely. The following batter, Brendan Rodgers, flied out for what could have been an inning-ending out if not for the two infield blunders. Instead, the inning continued. Charlie Blackmon singled to put a second runner on base, and then C.J. Cron did what he gets paid to do by putting the ball in the seats, giving the Rockies a 7-6 lead that they never relinquished.

In other words, four of the Rockies’ seven runs were indirectly the result of middle infield blunders initiated by Corey Seager.

On Aug. 26, Javier Baez of the Detroit Tigers reached via an incomplete Seager-to-Semien attempted double play that would have ended the inning. Instead, Harold Castro singled to bring Riley Greene home and cut the Rangers’ lead to 4-2. On Aug. 27, a slow hop to Seager resulted in Baez beating the throw to first, scoring Greene once again on a play that could have ended the inning. Instead, Jonah Heim had to gun down Baez at second to end the inning in what was eventually a humiliating 11-2 loss to the Tigers.

Lock ‘Em Up (The Ballad of Nathaniel Lowe)
.304. That’s what Nathaniel Lowe is hitting at the time of writing. If he ends the season above .300, he’ll be the first Ranger to bat over .300 since Adrian Beltre.

With the recent news that the Atlanta Braves are slowly beginning to lock up their core with long-term deals, the question must be asked: When are the Rangers planning on locking up some of their star players long-term? With Lowe producing steadily, and the imminent callup of Josh Jung to play third base, the Rangers’ ideal infield is set: Lowe, Semien, Seager, Jung. Along with Garcia’s bombastic showmanship, Jonah Heim’s steady improvement from last year and phenomenal pitch framing, and the emerging/proven talent of Leody Taveras, it’s looking like the Rangers are that much closer to having the core they’ve needed for practically a decade.

Call ‘Em Up
First of all, call up Josh Jung right now. Second, welcome to the show, Mark Mathias! The rookie infielder acquired from the Milwaukee Brewers in exchange for relief pitcher Matt Bush has gone absolutely bananas in the eight games he’s played with the Rangers since getting the call-up from Triple-A. Across 24 plate appearances, he’s already hit .458 with two home runs, eight RBIs, and a .480 on-base percentage. As with many call-ups this season and last, the rookies with something to prove are likely to prove themselves. Let’s see how the new organization handles them — on and off the field.

Speaking of Josh Jung, here’s another reminder that at Triple-A, Jung is hitting .293 with nine home runs and an OPS of .984. Rangers’ management says the reason Jung has yet to be called up is simple: He hasn’t played enough this year since recovering from a shoulder injury that prevented him from participating in Spring Training. Fair. He’s only had 99 at-bats. But still, call up Josh Jung.

What does the remainder of the season have in store for the Texas Rangers? Can they feasibly get above .500? Doubtful.

Anyway, wake us up when September ends and the Rangers can talk to Aaron Judge.
KEEP THE DALLAS OBSERVER FREE... Since we started the Dallas Observer, it has been defined as the free, independent voice of Dallas, and we'd like to keep it that way. With local media under siege, it's more important than ever for us to rally support behind funding our local journalism. You can help by participating in our "I Support" program, allowing us to keep offering readers access to our incisive coverage of local news, food and culture with no paywalls.
Make a one-time donation today for as little as $1.