Danger in Dallas! Comic book stores are everywhere, and they're great. Courtesy of Marvel
There’s no doubt about it: geeks rule the world. The days when kids would be shamed at school for wearing a Star Wars shirt are long behind us, as geek culture rules the mainstream and has become the basis for our entire entertainment ecosystem.

It may have seemed like a pipe dream a few decades ago to get even a few superhero movies each year, but now there are so many Marvel and DC projects out that even the most dedicated fans would have a hard time catching up.

These franchises have significant crossover appeal to those who have never previously been interested in traditional geek culture. You don’t need to have a working knowledge of magical spells to enjoy the Harry Potter movies. You don’t have to have seen the original Star Wars trilogy to enjoy Andor. And you can still enjoy The Avengers even if you’ve never picked up a comic book in your life. While it’s certainly a good thing that more people are getting exposed to these stories, it can occasionally get annoying for longtime fans who were there from the beginning.

That isn’t a problem for DFW. In addition to holding a ton of great conventions, cosplay events and special fan screenings, the Dallas area is often a great place to simply peruse the aisles of a comic book store. Sure, in the days of ordering online through Amazon or Barnes & Noble, you can have your comics and graphic novels shipped directly to you, but there’s nothing like rushing into your favorite location to grab a new issue.

Looking through the stacks of both fresh and well-loved issues, trade paperbacks and collections is an essential part of being a geek. There are a ton of great North Texas comic book stores, but we narrowed down our list of the best in 2022.

Carpe Diem Comics
208 E. Louisiana St., McKinney
Conveniently located in the Downtown McKinney square, Carpe Diem has a great back section of older comics alongside every new issue you need. The store's tabletop selection and terrific magnets, figurines and guidebooks give geeks plenty of piles to sort through as they catch up on their favorite franchises.

Madness Games & Comics
3000 Custer Road, No. 310, Plano
There may not be a bigger comic shop in DFW, and there aren't many that are better, either. Madness Games & Comics has so many great events that allow readers to interact with one another and meet those with like-minded taste, and its gaming center is one of the best. Whether you’re competitive or a newbie, there’s a place for you!

Keith's Comics
5400 E. Mockingbird Lane, No. 120
This under-the-radar shop is the perfect place to stop by if you’re shopping at Mockingbird Station or checking out a movie at the Angelika Film Center. You’re sure to find new issues at Keith's if you’re looking for them, and the helpful online guide is a great opportunity for buyers to plan their purchases in advance.

Titan Comics
3128 Forest Lane, No. 250
Titan Comics makes our list based on the sheer magnitude of its collection. Whether you’re looking for the new issue of Spider-Gwen or one of the older Star Wars trade paperbacks (yes, even the ones that Disney claims are “non-canon”), Titan Comics is sure to have it thanks to the constant flow of inventory.

Zeus Comics and Collectibles
1334 Inwood Road
What’s better than walking into a comic shop looking for one series, then leaving with a stack of new favorites to dig into? With its great featured selections and knowledgeable staff, Zeus Comics keep you informed on all the new titles that you should have on your radar. 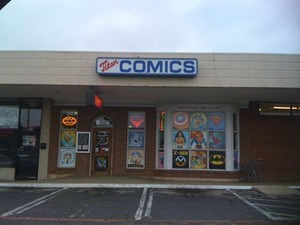 Titan Comics is one of the best comic book stores in Dallas.
Courtesy of Titan Comics

Comic Asylum
905 N. Jupiter Road, No. 170, Richardson
While its Wizard Cards and Yu-Gi-Oh tournament competitions are legendary, Comic Asylum’s collection is pretty impressive in its own right. There isn’t a better collection of Magic: The Gathering cards in the area, and Comic Asylum offers new players a chance to learn the tricks of the trade with its well-versed staff recommendations.

Boomerang Comics
500 E. Round Grove Road, No. 313, Lewisville
Boomerang Comics is constantly bringing in collections of older issues, so if you’re looking for something obscure, you know where to go! You’ll always be able to find something to read, but the impressive lineup of toys, games and statues makes this a perfect place to stop if you need a last-minute present.

Urban Legends Comicshop
3501 Gus Thomasson Road, Mesquite
Urban Legends lives up to its self-proclaimed moniker of “legendary tales are waiting for you.” Seriously, it’s not just comics, even though they’re are plenty of them. You can find puzzles, T-shirts for all franchises and sizes, board games, collectible toys, themed flasks and dishware and pretty much everything else that a geek would ever need.

Twenty Eleven Comics
2230 Morris Road, Flower Mound
This family-owned warehouse of comics is so well organized that you’re never in danger of finding something misplaced. You can look for even “that one weird series that no one knows about.” Twenty Eleven Comics is a great place for obsessives to catch up on everything on their reading list.

More Fun Comics and Games
103 W. Hickory St., Denton
No trip to the lively downtown square of Denton is complete without a stop at More Fun Comics and Games, which just so happens to be located right by the candy store. This is one of the best collections of geek-oriented games and cards in the entire DFW area, and you may not have seen so many Funko Pops in the same place before!

Black Cat Records N Comics
971 Botham Jean Blvd.
Great comics? Great music? Sounds good to us. Black Cat somehow manages to keep an active collection of buzz-worthy vinyls alongside a frequently stocked collection of every new hit series. You might even be able to get your non-geek friends to come in just to look at all the cool music on display. Consider it a crossover experience!
KEEP THE DALLAS OBSERVER FREE... Since we started the Dallas Observer, it has been defined as the free, independent voice of Dallas, and we'd like to keep it that way. With local media under siege, it's more important than ever for us to rally support behind funding our local journalism. You can help by participating in our "I Support" program, allowing us to keep offering readers access to our incisive coverage of local news, food and culture with no paywalls.
Make a one-time donation today for as little as $1.