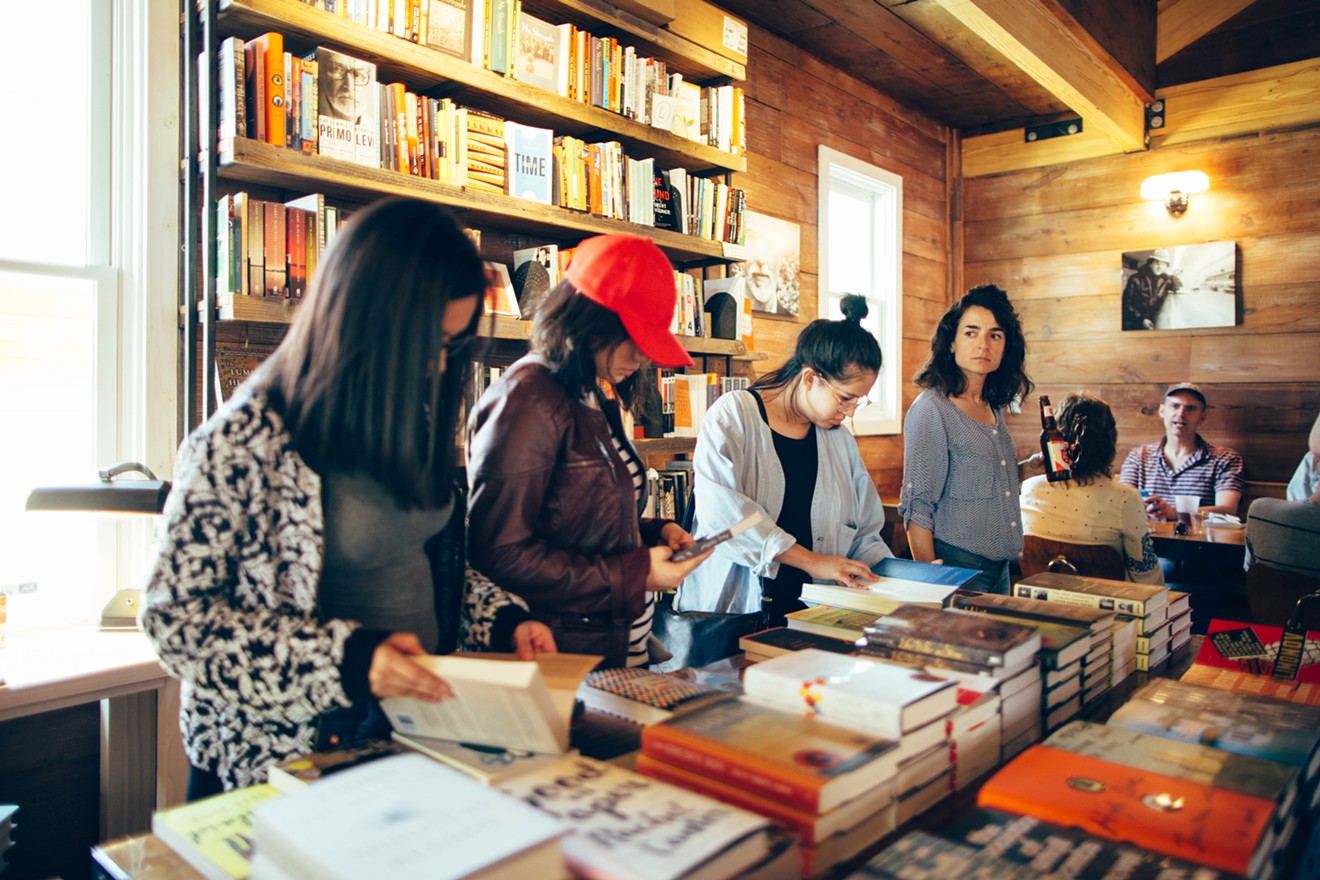 Wild Detectives will no longer worry about stocking the most recent titles; customer and community recommendations will drive their stock. Kathy Tran
Last week, the team behind the Wild Detectives, an independent bookstore, cafe and bar venue in Oak Cliff, marked their third anniversary with a blog post announcing three big changes: a shift in curatorial focus that will allow the Dallas literary community to choose the books that will be sold in the store; a new team member, Lauren Smart, who will head the store’s retooled literary events program; and extended bar operating hours on Saturdays to keep the literary conversations going.

“Every December, we ask our friends and collaborators in Dallas to send us their best picks for the year regarding books, movies and records,” says Andres de la Casa-Huertas, brand director for the Wild Detectives. “One thing we noticed is that when it comes to books, a lot of them didn't read titles released that year, but all those other books they wanted to read, following their own personal to-read list.”

De la Casa-Huertas says that it made sense to him and the WD staff to curate a selection of books that not only they liked and wanted to showcase, but that their customers and friends liked as well.

“It was only natural to look for help from our literary friends here in Dallas and abroad, to come up with a broad selection of titles people have found relevant in one way or another,” he explains. “All in all, we wanted to pay more attention to those books that people would like to read over the fast-paced rotation of titles that the industry imposes.”

Smart, who headed the first edition of the month-long festival Women Galore at WD last year, will curate the store’s “new literary programming,” which de la Casa-Huertas says will be more tightly curated (with one event per week, as opposed to several) and unlike the typical book-presentation format of author readings, Q&As and book signings. Instead, the events will be more interactive and discussion-focused.

“We are all about cultural conversation,” de la Casa-Huertas says. “We want to connect our events with what’s going on in the world outside, and with those topics our community is interested in.”

To further these conversations, the store is extending its bar operating hours to 1 a.m. on Saturdays; and, in placing a stronger emphasis on the nightly cocktail program, will open every day at 10 a.m. instead of 8:30 a.m.

De la Casa-Huertas says that he and his team envision the space as a “hanging out joint,” and that delicious drinks are a means to an end in terms of “rich, satisfactory and fruitful conversation,” and not the other way around.

“Over the past three years, we’ve witnessed how people have met in our spot for the first time and are now collaborating on each other’s projects,” he notes. “That’s definitely something that makes us quite proud.”

The hashtag #LiteraryDallas — which de la Casa-Huertas credits to a tweet by Will Evans, the founder of Deep Vellum Publishing and president of the indie entertainment company Cinestate — appears on almost all of WD’s social media posts, and is shared with the growing Dallas literary community. This includes a popular Facebook group and two other independent book stores in the region: Deep Vellum Books in Deep Ellum and The Last Word in Fort Worth.

De la Casa-Huertas points out that Dallas has always had a healthy literary scene. “The scene was actually quite strong in the ’90s,” he recounts, “but then local bookstores such as Borders closed down, and the scene lacked spaces for people to hang out and interact with each other on a regular basis.” Now, he says, #LiteraryDallas is a great way to call out the scene’s recent bloom.

“I think that initiatives like ours or Deep Vellum’s have worked as catalysts to bring that scene up to the surface again,” he continues. “It’s not that the scene wasn’t there before; it’s just that now it’s more visible, and people interested in literature and culture know where to go and meet their peers.”

WD also welcomes event suggestions from the public, especially if they challenge standard formats and definitions of what a literary event should be. Declaiming poetry while tap dancing? De la Casa-Huertas says, “Bring it on!”

Leah Pickett writes about music, art and culture for the Dallas Observer. She also reviews films for the Chicago Reader and works as an editor at BNP Media. Besides writing, she likes to read, drink coffee, immerse herself in American New Wave cinema and listen to at least five podcasts a day.