Best Things To Do in Dallas This Week 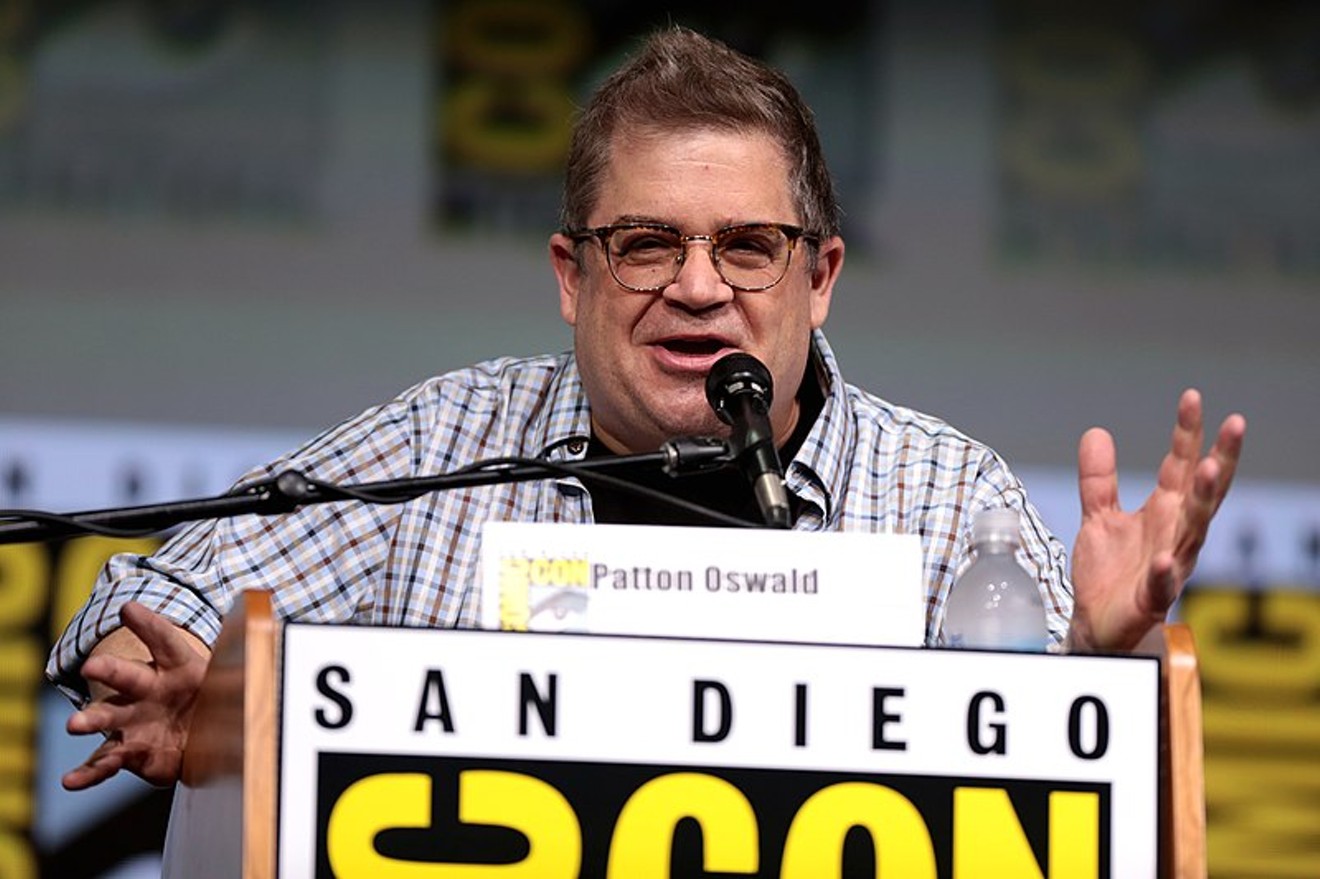 Patton Oswalt will be in town. Wikimedia Commons/Gage Skidmore

“The only reason to visit Florida is to identify your daughter’s dead body.” That line from actor/comedian Patton Oswalt is funny because it’s true, as Homer Simpson would say. True and biting observations are the stuff of Oswalt’s stand-up shows. The diminutive comedian gave voice to Remy, the starring rat in the animated movie Ratatouille, and is a regular face on a number of TV shows, including The Goldbergs and Justified, along with roles in several movies. His stand-up is a hilarious blend of dark, bizarre and self-deprecating humor that’s edgy without being bitter. Get a taste Friday as he appears at The Majestic Theatre, 1925 Elm St., at 8 p.m. Tickets, and there aren’t many left, are $49.50 at ticketmaster.com. Patrick Williams

Imagine that, at the worst moment in your life — the time when you most need to reach out and communicate a loss or an intense grief — the person you most needed to talk to couldn’t quite understand you. That’s the premise of Guadalupe in the Guest Room, WaterTower Theatre’s latest production, which serves as an alternately heartbreaking and heartwarming exploration of the ways we connect, even when language is not on our side. The Tony Meneses play, directed by Christie Vela, puts its audience in the home of a stunned widower and his Spanish-speaking mother-in-law, both of whom are grappling with the death of their beloved Claudia. They co-exist awkwardly, each grating on the other’s nerves while feeling alone in their grief, until they unexpectedly bond over a florid telenovela and begin to find some common ground. The show premieres at 8 p.m. Friday and continues through Sunday, March 17, with performances at 7:30 p.m. on Wednesdays and Thursdays, 8 p.m. on Fridays and Saturdays, and 2 p.m. on Saturdays and Sundays at 15650 Addison Road. Tickets are $8 to $35 at watertowertheatre.org. Jennifer Davis-Lamm

Being a litterbug has been kind to folk singer Arlo Guthrie. His arrest for improperly disposing of trash from a Thanksgiving dinner helped him avoid the draft during the Vietnam War and inspired him to write a song, “Alice’s Restaurant Massacree,” that became an Oscar-nominated movie directed by Arthur Penn in 1969. Plus, it has kept Guthrie in dinners for a good 50 years. See Guthrie perform the comedic protest song that made him famous, along with other songs from a long career in folk music, as he appears with his daughter, Sarah Lee Guthrie, at 7:30 p.m. Friday at the Hill Performance Hall at the Eisemann Center, 2351 Performance Drive, Richardson. Tickets are $48-$62 at eisemanncenter.com. Patrick Williams

A group like Cypress Hill doesn’t have to try very hard to get crowds moving. Between them being the first platinum-selling Latino-American hip-hop group in history and their iconic catalog of songs, it would be understandable to see them resting on their laurels. But these captains of cannabinoids have seemingly kept their ears open and their wits about them. In 2018 they released their ninth studio album, Elephants on Acid, eight years after the last mainline album from the Cypress Hill crew. The time spent focused on side projects and other ventures by B-Real, Sen Dog, DJ Muggs and Eric Bobo alike, clearly didn’t keep them from evolving their sound more than three decades after forming. Elephants on Acid is the aural equivalent of staring at a blacklight poster in your older cousin’s nag champa-scented room, as lyrically visceral as any Cypress Hill album before, but elevated musically by Middle Eastern flair and a mystically brooding atmosphere. Like a time capsule that never got buried, Cypress Hill in 2019 is both nostalgic and innovative. 7:30 p.m. Friday at House of Blues, 2200 N. Lamar St., $35.50-$59.50 at houseofblues.com. Nicholas Bostick

Bert Kreischer is the world’s greatest topless comedian. He will literally take his shirt off or start the evening without a shirt and stay that way for the entire evening. You’ll get the chance to see him live at the Majestic Theatre, 1925 Elm St., on Saturday at 7 or 9:30 p.m. Kreischer first found fame in college at Florida State University in a six-page feature in Rolling Stone that called him the top partyer at the top party school in the nation and later served as inspiration for the Ryan Reynolds comedy National Lampoon's Van Wilder. In between his drunken party nights, he performed stand-up, and one of his tapes made it to a talent agent in New York who turned his boisterous, dumb fun party act into a comedy act that took him across the country, television on the late night shows and his own TV specials. Tickets are $37.50 and can be purchased at ticketmaster.com. Danny Gallagher

Monster truck rallies rank right up there with jazz as one of the most uniquely and characteristically American art forms. It’s a simple, intoxicating formula: big, loud machinery + reckless abandon + theatrical crashes + alcohol = good, old-fashioned, family-friendly fun. The promise of American-made behemoths rocketing hundreds of feet through the air propelled by thousands of horsepower, all backed by licking flames and unearthly bellows, is about as close as entertainment gets to pure, unalloyed adrenaline. Monster Jam starts at 7 p.m. Saturday at AT&T Stadium, 1 AT&T Way, Arlington. Tickets start at $30. More info at attstadium.com. Jonathan Patrick

Those whose only knowledge of Sarah Brightman is from her role as Christine Daaé in The Phantom of the Opera might be happy to learn there’s much more to the three-octave soprano’s career. And AT&T Performing Arts Center is offering the opportunity to see the newest iteration of the international star at 8 p.m. Saturday in the Winspear Opera House, 2403 Flora St. Most hear “crossover” and imagine a country song that makes pings on the pop charts. That’s fairly commonplace these days. Brightman has taken the term “crossover artist” to a different level. She has topped dance and classical charts at the same time, dazzled audiences at two Olympic Games and sold millions on millions of records of her duet with Andrea Bocelli. Saturday’s performance celebrates Brightman’s latest release, Hymn, and tickets range from $53 to $153, with VIP package options from $300 to $900 per ticket (yes, one includes a meet-and-greet). Call 214-880-0202 or visit tickets.attpac.org to purchase. Merritt Martin

If the love doesn't feel like '90s R&B, do you even want it? Saturday night's concert will give you all the '90s slow jams you need to get the mood going. Tyrese, Ginuwine, Donnell Jones and Avant make up the bill at The Theater at Grand Prairie. You'll remember hits like "Pony" and "Where I Wanna Be." With 702, 8 p.m. Saturday at The Theatre at Grand Prairie, 1001 Performance Place, $59-$125. Diamond Rodrigue

John Maus’ raw passion on stage paired with his evocative lyrics, haunting howls and nigh-manic style of tightly clenched fist-pumping and head-banging delivery burst with far more energy and emotion than a casual listener of his apocalyptic synth-pop may suggest. Early observers of Maus' unforgettable performances may have mistaken his stripped-down solo sets for experimental performance art, and some critics have written that he appears to be “in the middle of a nervous breakdown” while performing on stage. Following the release of 2017’s cerebral LP Screen Memories, as well as a collection of carefree tracks called Addendum in 2018, Maus transitioned from solo performances to touring with a full backing band. Then his brother and bandmate, bassist Joseph Maus, died in July 2018 while on tour, forcing the cancellation of many tour dates. Since then John again retooled his staging for the shows on his latest tour, which “will feature a new, augmented solo live performance, complete with several points of sound on stage and lights synced to midi,” according to a press release. Fittingly Dallas-based Nervous Curtains opens. 8 p.m. Saturday at Trees, 2709 Elm St., $20 and up at treesdallas.com. Daniel Rodrigue

Local legend and R&B singer Erykah Badu will be back at The Bomb Factory for Another Badu Birthday. Celebrity guests such as Dave Chappelle, as well as local favorites Leon Bridges and Bobby Sessions have been known to make appearances at this annual event. Hosting the birthday party at The Bomb Factory has turned into a tradition since moving from the Granada Theater in 2016. The seemingly ageless Badu turns 48 this year. Recently, Badu faced criticism after she announced she was “putting up a prayer” for R. Kelly. However, this did not keep her event from being sold out. This year, the Badu Birthday is sure to keep up with its glamorous, star-studded reputation. 8 p.m. Saturday at The Bomb Factory, 2713 Canton St., $76-$170 at stubhub.com. Jacob Vaughn

You’re probably at least vaguely familiar with some of the names of artists from the impressionist movement: Monet, Renoir, Degas, Morisot. That last one doesn’t ring any bells? It should. Berthe Morisot was one of the leading figures of the revolutionary art movement. She was also a woman, and the patriarchy being what it is, she and fellow impressionist Mary Cassatt don’t command the kind of historical fame that their penis-possessing cohorts found. See why this revolutionary, brilliant artist deserves better as the Dallas Museum of Art brings the city Berthe Morisot: “Woman Impressionist,” a major exhibition of her works organized by the DMA and three other institutions in the U.S., Canada and France. The show opens at 3 p.m. Sunday and continues through May 26, and the museum, 1717 N. Harwood St., will host a number of programs about Morisot and her work. Find tickets, $16 for adults with discounts for kids, seniors and military members, and more information at dma.org/BertheMorisot. Patrick Williams

American Celtic punk band Dropkick Murphys are on a 22-date tour this year. Stopping through Dallas once again around St. Patrick's Day, the band's career spans two decades and nine albums. The latest album, 11 Short Stories of Pain and Glory, came out in 2017 on the band's own label Born & Bred. 6:45 p.m. Sunday at South Side Ballroom, 1135 S. Lamar St., $35. Diamond Rodrigue

Muse has been on cruise control since they became an arena band in the United States. They're still a band that wants to play metal-tinged pop rock crossed with electronica and Queen-like pomp, but the music is a bit more arena-friendly now. People who loved them early in their career have moved on, as Muse reached the heights they always wanted. Embracing dubstep and their hard-rock roots, they're a different band now. Their latest, Simulation Theory, arrived late last year, so expect the focus to be on songs from that, in addition to some older tunes. And visually, they're one of the more dazzling sort of bands out there. Laser lights and video projections are on a much more futuristic level with this band, and the results are quite amazing. With Walk the Moon, 7:30 p.m. Sunday at American Airlines Center, 2500 Victory Ave., $44 and up at ticketmaster.com. Eric Grubbs
KEEP THE DALLAS OBSERVER FREE... Since we started the Dallas Observer, it has been defined as the free, independent voice of Dallas, and we'd like to keep it that way. With local media under siege, it's more important than ever for us to rally support behind funding our local journalism. You can help by participating in our "I Support" program, allowing us to keep offering readers access to our incisive coverage of local news, food and culture with no paywalls.
Make a one-time donation today for as little as $1.