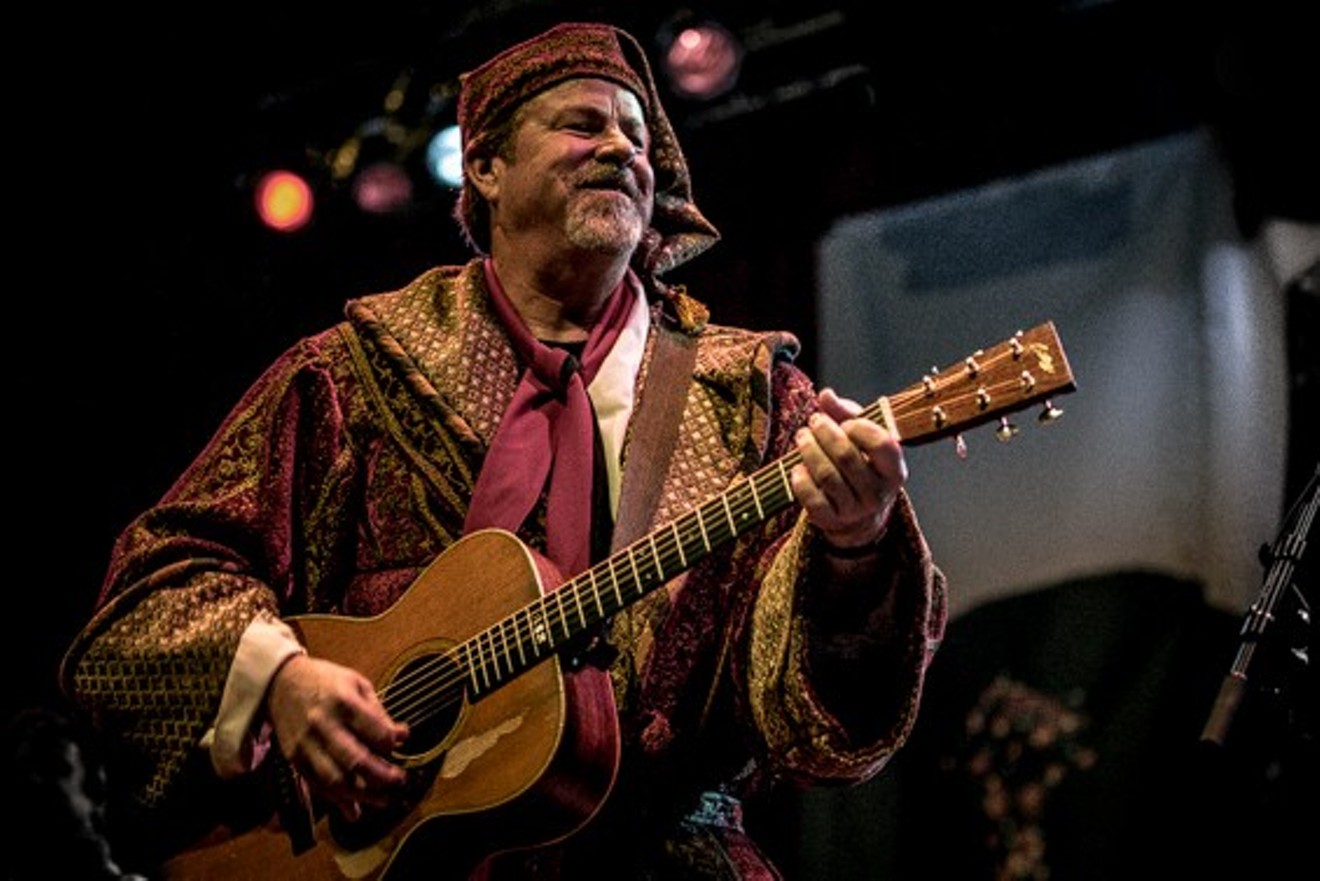 See Robert Earl Keen this weekend. Kerry Langford
Friday
The Dallas Mavericks had a terrible season on the court — and a worse one off it when a Sports Illustrated feature revealed the corporate work environment was rife with sexual harassment. But somehow, Dallas’ GOAT — greatest of all time — and our recent cover boy, Dirk Nowitzki, came out of it as beloved as ever, speaking out against the Animal House-like office atmosphere and signing on for a record 21st season with the only NBA team he’s ever known. Also returning for another year is Dirk Nowitzki’s Heroes Celebrity Baseball Game, bringing together stars from about every sport imaginable, including lacrosse, plus other oddball celebs such as actor Geoff Stults, reality TV host Mark Cuban and rapper Cole Beasley for some bad hardball and other entertainment benefiting the Heroes Foundation and the Dirk Nowitzki Foundation. The Heroes Special Olympics All-Star Softball Game starts at 5 p.m. Friday at Dr Pepper Ballpark, 7300 Roughriders Trail in Frisco, and the celeb game follows at 7, with a fireworks finale after the game. Tickets, $9-$23, and more information are available at dnfoundation.org. Jesse Hughey

In WaterTower Theatre’s musical The Last Five Years, which opens at 8 p.m. Friday, Monique Abry and Seth Womack take the roles of 20-something artists experiencing love, loss and lots of in-between stuff over five years, boiled down to an hour and a half (no intermission). The show runs through July 1 at the theater, 15650 Addison Road in Addison. The 2 p.m. Sunday performance is "pay what you can," and the 7:30 p.m. June 21 show will have an American Sign Language interpreter. Tony Award-winner Jason Robert Brown is the author. Kelsey Leigh Ervi directs, and Dallas songwriter Adam C. Wright is musical director and pianist of the six-piece band. For tickets, $28, call 972-450-6232 or visit watertowertheatre.org. Reba Liner

It’s time for a reality check. Your dreams of being on a game show aren’t going to happen. For starters, there are way fewer of them on TV now. They are all filmed on the west side of the country. So even if you got picked and won the top prize, the money you’d have to spend and the taxes you’d have to pay on it would negate the whole thing. The next best thing is happening at 11:15 p.m. Friday and Saturday at the Pocket Sandwich Theatre, 5400 E. Mockingbird Lane. The Live Matching Game is a live comedy game show in which a gaggle of celebrity panelists, such as comedian Aaron Aryanpur and KSCS-FM’s Jasmine Sadry, come up with funny answers to weird questions as contestants chosen from the audience try to match their answers to win some fabulous prizes. Tickets are $10 and can be purchased at the box office or at pocketsandwich.showare.com. Danny Gallagher

With Snarky Puppy, which won back-to-back Grammy Awards for best contemporary instrumental album in 2016 and 2017, it’s probably best to take the advice of The New York Times’ Nate Chinen on the Denton-bred group now based in New York: “Take them for what they are, rather than judge them for what they’re not.” Over the past decade, the love-them-or-hate-them, mostly vocals-free act has sharply divided critics, bloggers and record store clerks. Led by composer, producer and bassist Michael League, who formed the jazz-fusion act in 2003 while in the University of North Texas’ Jazz Studies program, Snarky Puppy hit its stride three years later after tapping into Dallas’ gospel and R&B scene, which remarkably upgraded the group’s sound and vibe, making it harder and harder to pigeonhole. The Pups won numerous Dallas Observer Music Awards for best jazz act before winning the outfit’s first Grammy Award in 2014 for best R&B performance for "Something" off Family Dinner — Volume 1. So if you’ve yet to witness the Grammy-winning act with serious local roots, catch it Friday at The Bomb Factory to help welcome League and company back to Deep Ellum. 8 p.m. Friday, June 8, The Bomb Factory, 2713 Canton St., ticketfly.com, $32. Daniel Rodrigue

United Kingdom DJ extraordinaire Mark Night will be hitting one of Dallas’ most overlooked clubs, and boy will the Brits be jealous, or at least glad they moved to the states. For more than 10 years, Knight has been a champion to the scene as one of the leaders of the UK’s largest independent music labels, Toolroom. This Grammy-nominated DJ/producer is one of Europe’s most respected beat masters, and having him live in Dallas is more than a treat. He found mainstream recognition with tracks such as “Man With the Red Face” and “Second Story,” the latter of which was dubbed an “essential new tune” by the BBC’s Pete Tong. Knight is a pillar of the modern hardcore EDM elite. 9 p.m. Friday, June 8, It'll Do, 4322 Elm St., 214-827-7236, $15-$25. Nicholas Bostick

One of singer-songwriter and actor Sean Tillmann's alter egos wears less clothing than the other two. Har Mar Superstar often gets his kicks by stripping down to his skivvies. But it's not all aesthetic antics; he cranks out some well-crafted R&B while doing so. Friday night's show at The Kessler Theater should be no different, except that the Superstar is touring this summer in the name of soul music legend Sam Cooke. Expect covers of some of the best love songs of the '60s, as well as original music inspired by Cooke from Har Mar Superstar and his band. 8:30 p.m. Friday, June 8, The Kessler Theater, 1230 W. Davis St., 214-272-8346 or thekessler.org, $18. Diamond Victoria

Texas Heritage Songwriters Hall of Famer Robert Earl Keen is a bit of an anachronism in the modern era of music. His iconic brand of Americana was beloved long before the genre became a mass of alt-rock lyrics and banjo strings. Probably best known for his work with artists like George Strait, Lyle Lovett and The Highwaymen, Keen, a Houston native, has spent nearly half of his life as one of the Lone Star State’s best musical ambassadors. He hit his stride in the mainstream country music scene during his tours with fellow singer-songwriters Guy Clark and Townes Van Zandt. Some of Keen’s biggest classics, such as “The Road Goes on Forever” and “Feeling Good Again,” have stood the test of time, but Keen’s probably best known for his annual Christmas tours. Sounding like the nasally farmer cousin Dylan never knew about, Keen paints pictures with his vocals, and he’s still at it more than 30 years later. 10:30 p.m. Friday, June 8, Billy Bob's, 2520 Rodeo Plaza, Fort Worth, 817-624-7117 or billybobstexas.com, $18 and up. Nicholas Bostick

Saturday
Ballet, ever the cultural stalwart, has not customarily been a place for great innovation. The choreography has a predefined language — each movement has a name, each sequence is controlled. But Alonzo King, son of civil rights activists, has infused the art with a modern propulsion that honors its rigid traditions while imbuing it with new elements of culture and diversity. King, who finds inspiration from jazz, Indian and African music, and his extensive exploration of psychology and philosophy, believes that movement underlies, informs and explains much of human behavior. As a result, his ballet is powerfully kinetic, primal and universal. See King’s stunning work as TITAS presents the Alonzo King Lines Ballet at 8 p.m. Saturday at the Winspear Opera House, 2403 Flora St. Tickets are $12-$135 at tickets.attpac.org. Jennifer Davis-Lamm

If you thought that you had to hold out until the sweltering start of July for a fireworks fix, you’ll be pleased. Fair Park makes pyrotechnics available to you in the sweltering midst of June, too. Hydrate well and sweat it out. It’ll be worth it as Fair Park Sparks gets lit from 2-10 p.m. Saturday at Big Tex Circle in Fair Park, 1300 Robert B. Cullum Blvd. Enjoy a spectacular family-friendly extravaganza in one of Dallas’ most architecturally significant locales with a full day of live entertainment, activities for kids, rides, inflatables, face painters, and food and drink aplenty. Fireworks will kick off as soon as the skies darken enough to show off the glow — and best of all, you can get your oohs and aahs on for free. There’s no admission fee (although parking will set you back $10). Visit fairpark.org for details. Jennifer Davis-Lamm

The Dallas Public Library’s World Languages and Cultural Fair promises “some of our city’s greatest wonders,” including Central and South American folklore from the Ollimpaxqui Ballet Company and Scottish traditions from the Scottish Society of Dallas. Learn about oral storytelling traditions from media expert Angelique Westerfield, get information about passports, and participate in arts and crafts activities from 1-5 p.m. Saturday at the J. Erik Jonsson Central Library, 1515 Young St. Register for the free event at eventbrite.com. For more information, visit dallaslibrary.org. Emily Goldstein

Only a few years ago, Leon Bridges was washing dishes when he wasn't playing music on the side. Now he's at the point in his career where, on his second record, he can headline a venue like The Pavilion at Toyota Music Factory. The man has a voice that can travel well through a big place, so it is a good fit. He'll play the songs that made him a bonafide star, but as he supports the new Good Thing LP, expect that material to get more attention. Who knows? Maybe later that evening, he'll be in Deep Ellum busking for fun. 7:30 p.m. Saturday, June 9, The Pavilion at Toyota Music Factory, livenation.com, $25 and up. Eric Grubbs

Composed by Russian master Nikolai Rimsky-Korsakov, Scheherazade is one of the most performed works among contemporary orchestras. It’s easy to hear why. It’s full of glittering curlicues and baroque flourishes, colorful and dazzling. It hints at Asian exoticism; it’s fascinated with the florid and the purple. Its narrative, however, is much harder to digest. In an era of #metoos and real life monsters like Harvey Weinstein, Scheherazade feels eerily relevant. Over 300 years after the publication of Arabian Nights, the story on which the piece is based, we’re still dealing with the same shitty problems. In short, Scheherazade, the story’s central character, marries a sultan in order to prevent him from executing his other wives out of jealousy. Set to gorgeous music, this timeless tale of sacrifice and mortality will hit you right in the feels. As a bonus, it’s spectacularly entertaining. This lone performance happens at 7:30 p.m. Saturday at the Meyerson Symphony Center, 2301 Flora St. Tickets start at $29. Find more information at mydso.com. Jonathan Patrick

It seems there's always a great double- or triple-headlining throwback tour every summer, and this one's no different. Joan Jett, Styx and Tesla give us a night of rock 'n' roll nostalgia Sunday that's sure to make braving the heat worth it. Jett's last album hit airwaves in 2013, and Styx released The Mission just last year. With Styx and Tesla, 7 p.m. Sunday, June 10, Pavilion at Toyota Music Factory, 300 W. Las Colinas Blvd., thepaviliontmf.com, $25 and up. Diamond Victoria
KEEP THE DALLAS OBSERVER FREE... Since we started the Dallas Observer, it has been defined as the free, independent voice of Dallas, and we'd like to keep it that way. With local media under siege, it's more important than ever for us to rally support behind funding our local journalism. You can help by participating in our "I Support" program, allowing us to keep offering readers access to our incisive coverage of local news, food and culture with no paywalls.
Make a one-time donation today for as little as $1.