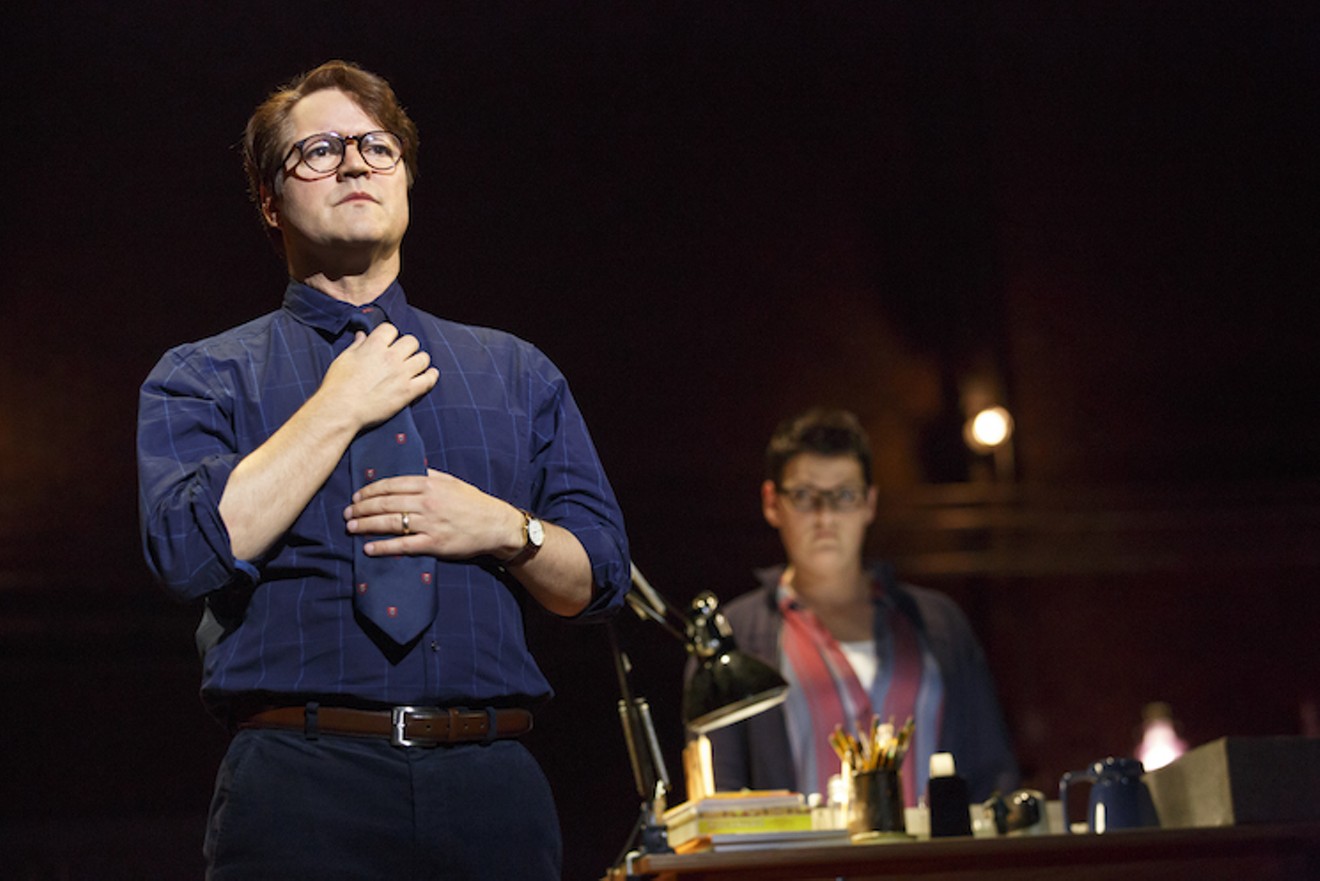 Fun Home is onstage through Sept. 24 at the Winspear Opera House.


In 2006, Alison Bechdel wrote a graphic memoir, Fun Home, about her life growing up in a restored Victorian home in rural Pennsylvania that doubled as a funeral home. Bechdel's father, who worked as a schoolteacher in addition to operating the funeral business, plays a large role in the novel. He was a closeted gay man who later killed himself, a fact Bechdel establishes early in the story.

Bechdel also writes explicitly about her sexual development and discovery that she is also gay. She delves into everything from the excitement of her first love to her experiences at Oberlin College. From the novel came the idea of “the Bechdel test,” which asks whether a work of fiction features at least two women who talk to each other about something other than a man.

As a graphic novel, Fun Home is an endearing and heartbreaking look at a dysfunctional family and a poignant coming-of-age story. In 2013, the musical adaptation of Fun Home debuted at New York’s The Public Theater, with book and lyrics written by Obie Award-winning playwright Lisa Kron and score composed by Tony Award nominee Jeanine Tesori. Sam Gold directed the production.

Bechdel has said she had her doubts her story could successfully transfer to the stage as a musical. But as she accepted the 2015 Tony for best musical with the three actresses that play her at various ages throughout her life, it was clear the musical was hitting all the right notes. It was a finalist for the 2014 Pulitzer Prize for drama and won the Lucille Lortel Award for outstanding musical, the New York Drama Critics' Circle Award for best musical and the Obie Award for musical theater.


"People will tell me that they really hated him at first, and couldn't believe that they felt something at the end. That's my goal."

The Broadway production opened in April 2015 and racked up a dozen nominations for the 69th Tony Awards, including best musical. During that entire time, only one actor played Bechdel’s father, Bruce. Michael Cerveris, one of Broadway’s biggest stars, also earned a Tony Award for his portrayal of the troubled dad.

The national tour launched after the Broadway show closed in 2016. It arrived at Dallas' Winspear Opera House on Sept. 13 and will stay through Sunday, Sept 24.

Now Bruce is played by the second actor to step into his shoes, Robert Petkoff. In 2014, Petkoff appeared as Hubert Humphrey in All the Way, written by Pulitzer Prize-winning playwright Robert Schenkkan, at the Neil Simon Theatre in New York. Bryan Cranston starred alongside Petkoff as LBJ.

Bruce is a character that demands precision. He is difficult to live with, and the family walks on eggshells to preseve the historic home at his insistence. The story is told through the eyes of his daughter, who is trying to make sense of the man who lived a lie. Bechdel came out as a lesbian shortly before her father’s death and wonders in the novel if her admission was the catalyst for his suicide.

Petkoff hadn't read the novel when he auditioned for the role of Bruce, but he read it afterward.

“I was just blown away by the story,” he says. “The nakedness of her honesty was astonishing.”

Petkoff is an actor with a resume that's taken him all over the world — including many plays under the direction of the late Sir Peter Hall, who died this week. He says the key to playing Bruce is in keeping his humanity.

Bruce kept secret relationships with young men, some of them his underage students. Petkoff didn't want to make the character a one-dimensional villain.

“I think he [Bruce] panicked. He was confronted with revealing that he’d been living a lie or admitting who he was. He decided in that moment to just do it,” Petkoff says.

The real Bruce Bechdel was hit by truck on a highway. His wife had requested a divorce just weeks before.

“People will tell me that they really hated him at first and couldn’t believe they felt something at the end," Petkoff says. "That’s my goal. I want you to see his humanity and the choices he believed he had to make. It’s so easy to hate villains. I want you to see him as a difficult but human man.”

The benefit of originating the role for a tour, Petkoff says, is working with the original production team. He’s the only actor other than Michael Cerveris to have the benefit of a full rehearsal with Gold as director.

The AT&T Performing Arts Center will donate 50 percent of the ticket price to the Red Cross to aid in Hurricane Harvey relief. When purchasing tickets, use the promo code “HARVEY” to apply the benefit.