We Talked to Bubbles from the Trailer Park Boys — Yes, the Actual Bubbles 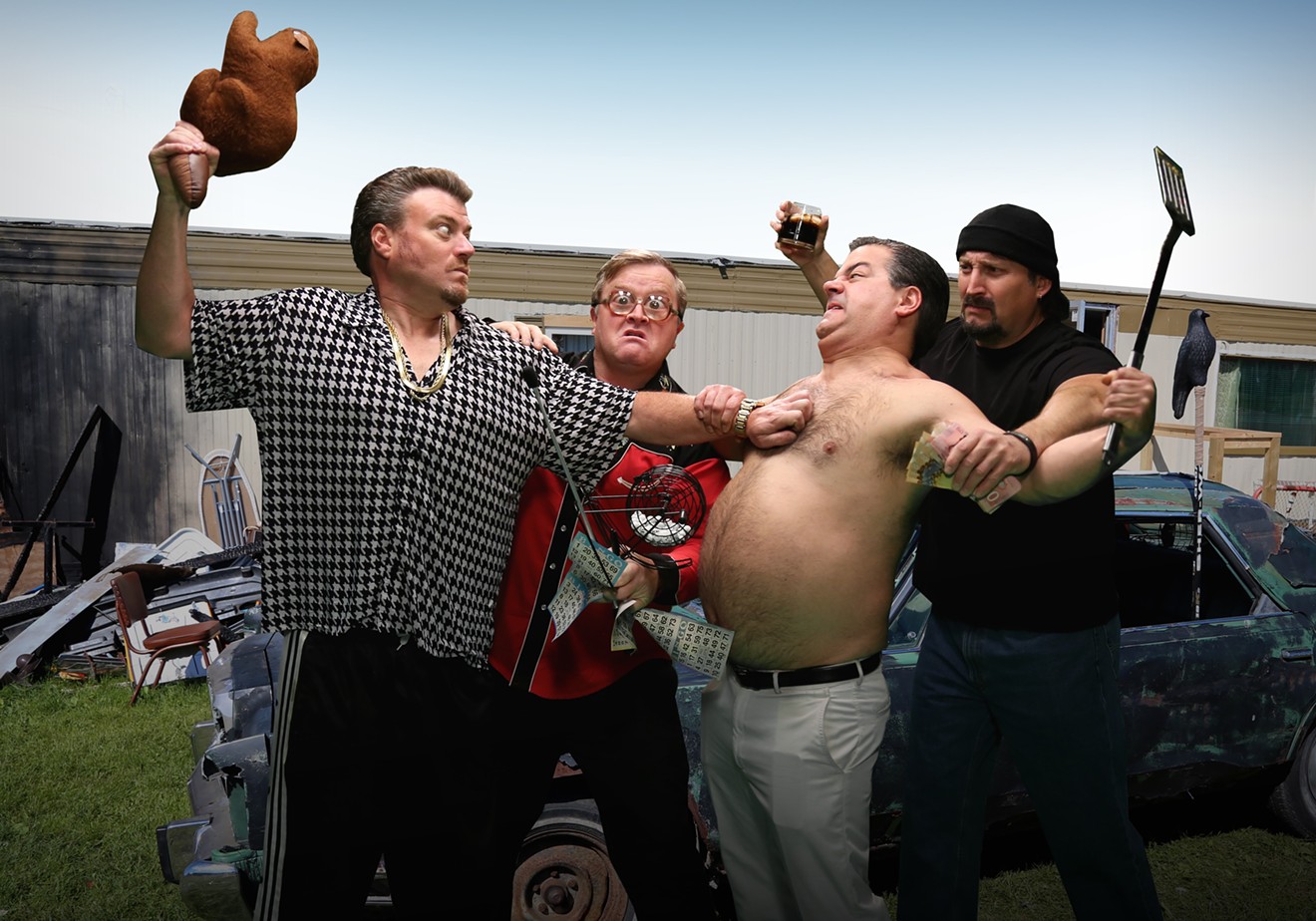 The Trailer Park Boys Ricky (Robb Wells), Bubbles (Mike Smith), Randy (Pat Roach) and Julian (John Paul Tremblay) return to Dallas for A Fucked Up Evening at The Majestic on Saturday. courtesy Personal Publicity
When you watch the Trailer Park Boys live, you're not always sure if you're in reality.

The cult comedy creations of Ricky, Julian Bubbles, who have run on Canadian TV and Netflix for 12 seasons, are always in character, even in press interviews. This is the third time we've interviewed them, and we've yet to talk to Robb Wells, John Paul Tremblay Mike Smith as Robb Wells, John Paul Tremblay and Mike Smith. Even if they are more known for their foul-mouthed, white trash brand of buddy crime comedy, the greatest thing they do is take comedic method acting to an extreme.

The last time they were in town at the Majestic Theatre — where they'll return Saturday as part of the tour A Fucked Up Evening with the Trailer Park Boys — the group made their amused and befuddled fans seem even more befuddled when Bubbles, played by Smith, took a scary tumble onstage.

Fifteen minutes later, the audience learned it was no joke. Smith had popped his knee out of its socket.

"She just popped out of a joint for a bit and she was fine," Smith, er, Bubbles says from their tour bus during a stop in Houston. "That was definitely not a bit."

Keeping the Trailer Park Boys' reality as real as it can seem makes their comedy work in special ways. Their series that's always been shot documentary-style as the cameras follow their crime-laden exploits and trailer-infused business plans from their headquarters at the Sunnyvale Trailer Park in Nova Scotia.


"It's never fun to have Randy there. He doesn't smell very good and farts a lot and eats a lot. He's not the funnest [sic] guy to have around." – Bubbles

The show started as a film, released in 1999 to wide acclaim. Two years later, it became a series for the Canadian cable network Showtime, on which it ran for seven seasons and developed a massive cult following. The characters were also featured in four feature-length films and countless live tours with memorable characters like the perpetually shirtless Randy, played by Pat Roach, and his alcoholic lover, James Lahey, played by John Dunsworth, who died last year shortly before the boys were scheduled to go on tour.

"Randy will be there for sure," Bubbles says. "It's never fun to have Randy there. He doesn't smell very good and farts a lot and eats a lot. He's not the  [sic] guy to have around."

The boys returned to the small screen when Netflix recommissioned the show in 2014. It's filmed five more seasons of the boys' exploits. The Trailer Park Boys have also launched the online network Swearnet, which features more curse-laden programming.

Even the boys' live exploits have been turned into films. Out of the Park sent Ricky, Julian Bubbles on challenges across America, like going on a space training mission and a space shuttle simulator ride with famed Canadian astronaut Chris Hadfield, a dream-come-true moment for the space-loving Bubbles.

"I landed a space shuttle with Chris Hadfield," Bubbles says. "What's better than that?"


The boys started their most recent tour in their native Canada before crossing the border into America and kicking things off stateside in San Diego. Bubbles crossing into America never goes smoothly.

"It's stressful because Ricky, you never know what's going on," Bubbles says. "He's always got dope on him or something. He's always lying to customs."

Of course, things are a little different now that we've got some states that don't mind recreational marijuana usage so much. If anything, Bubbles says those states should be more concerned about Ricky bringing his weed into their population.

"Ricky does what he wants," Bubbles says. "He doesn't care about laws anyway. And it's pretty hard to get anything better than Ricky's weed."

The chaos is usually good for the boys, especially live on a stage.

"I usually have the show planned out and work it out, and those guys usually fuck it up somehow," Bubbles says. "I always just like the show to be fun for people and pull people out of the audience and play music, but it always just seems to turn into some kind of bullshit."

The only sure thing, Bubbles says, is that everyone will have a good time Saturday.