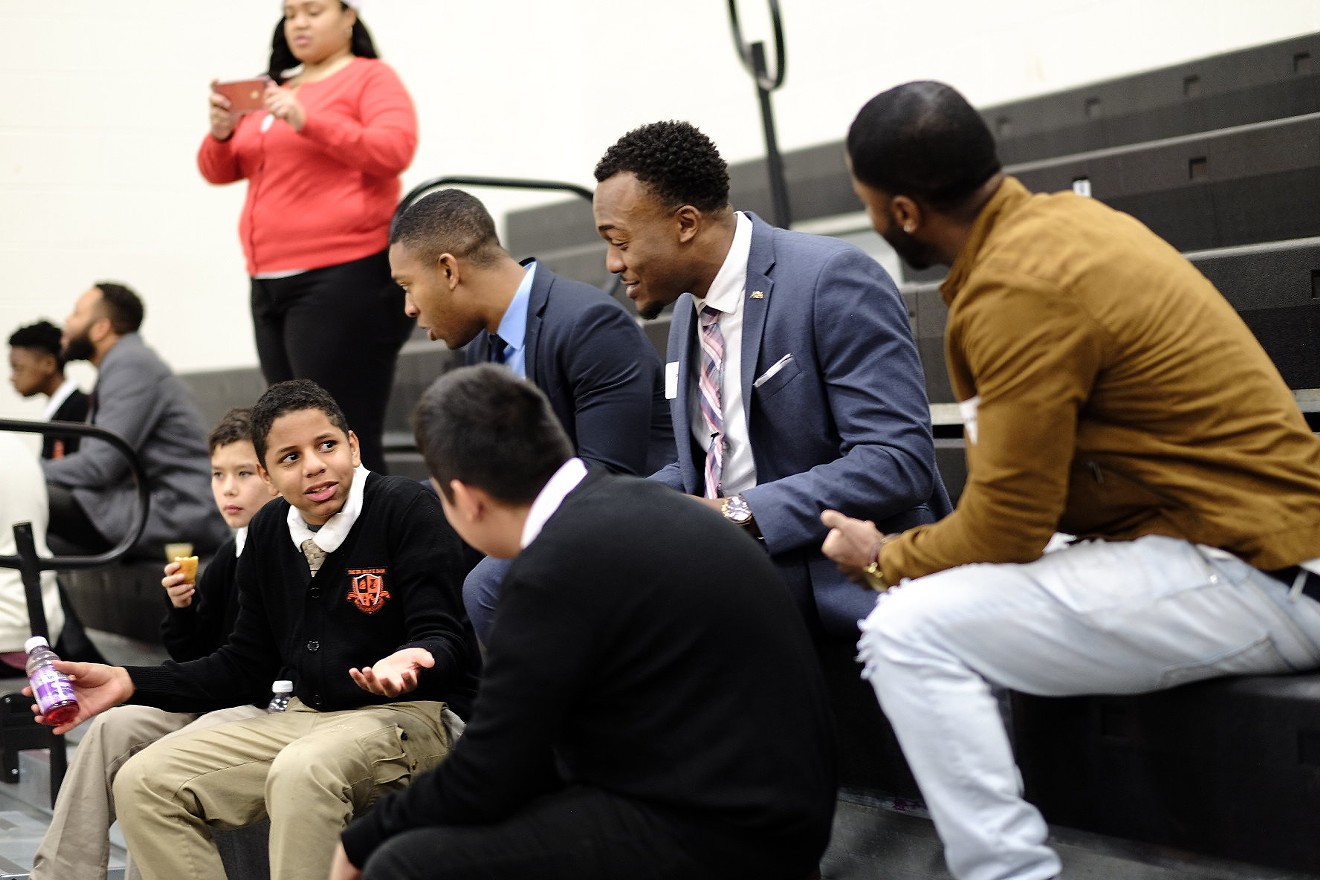 Over 600 men responded to a call for mentors for a special "Breakfast with Dads" event at Billy Earle Dade Middle School, a story that's gone viral on the Internet and social media. Stephanie Drenka
Back in December, the Rev. Donald Parish of True Lee Baptist Church of Dallas needed dads to serve as mentors for kids during a "Breakfast with Dads" event at Billy Dade Middle School. He says before the event, he was worried they might not have enough dads for all the kids in attendance.

By the time the event started, that concern shifted to worrying that they might not have enough kids for all the dads who volunteered to help.

"I helped organize the event with the school, and I asked about kids who don't have fathers and if we could get guys to stand in with the kids before the school day," he says. "I had maybe 20 to 25 guys and they said they could get 50. ...Truth be told, we had about 800 who called us and 600 who showed up."

The Breakfast with Dads event held on Dec. 14 has since become a viral milestone for the school and the community. The story of the massive response to the student mentoring event has not only attracted an untold number of shares and retweets on social media sites but it's also received a ton of national press from media outlets like Buzzfeed, The Washington Post, CNN others.

"I have imagined that this whole story would go viral," says Archie Nettles of Dallas, who was one of the 600 "dads" at the event. " "I hope this is just the beginning of something greater. I hope this becomes a movement."

Parish organized the event with the school as the president of Dade Middle School's site-based decision-making committee. When Parish was worried about attendance, site-based board member Kristina Chäadé Dove, who also works for the Dallas educational nonprofit group Big Thought, typed up a Facebook message asking for "at least 50 or more additional male mentors who can devote 1 hour of their Thursday morning next week to this cause."

Facebook readers passed on the message over and over again and pretty soon, Parish says the event's registration website crashed because so many people responded to the call.

"It just blew up from there," Parish says. "I saw the number of calls, voice messages and emails I was getting. I called Kristina and we were already at 200 people and then 200 turned into 300."

The Rev. Donald Parish of True Lee Baptist Church of Dallas says that so many people responded to the school's "Breakfast with Dads" event that the registration website crashed.
Stephanie Drenka
The event paired dads and other men in attendance with students who talked about their interests and aspirations while the "dads" offered inspiration and words of encouragement to them.

"Some of the dads were tasked with bringing ties so they could show the students how to tie a tie and give them the ties," says Alvin Johnson of Dallas, who works as a sergeant for the Lancaster Police Department. "They were really excited about that."

Damarcus Offord of Dallas says he felt compelled to show up and talk with the kids over breakfast because he grew up in the same community and wanted to "give back to the community that gave so much to me."

"One of the best parts of the visit was being able to talk to the young men," Offord says. "The main thing I wanted to get across let your circumstances determine your future.'"

Johnson says he was encouraged by the students' reaction to the turnout.

"I didn't really know how the kids would take it or how they would receive us, but they were so excited," Johnson says. "I think they were just as excited to see us as we were to see them and interact and engage with them. Everything caught their attention, and they made it very easy to engage them. So when you think about how young men can be standoffish or in their shell, it was just the opposite. They wanted to know just as much about us as we wanted to know about them."

Alvin Johnson, a Lancaster police sergeant who was one of the 600 volunteers who showed up for the event, says some of the men brought ties for the students so they could show them how to tie them.
Stephanie Drenka
"It was a good, humbling experience to be a part of," Offord says. "I didn't care if 60 people showed up. It was still an amazing experience. What they did that day is something that should be modeled across the country."

Parish says the volunteers' response to the call for help and the massive amount of attention the event received across the web exposes a very deep and heartwarming side of humankind that can be easy to overlook in such cynical times.

"I think it speaks to the love for humanity that the average person has in Dallas for each other," Parish says. "We've been given a bad rap here in Dallas — and Dallas still has its issues. We're deeply segregated where we live. ... We still have black and white schools and Hispanic schools, and kids know it, and that's still a negative. But to me, it speaks to the fact that we're all still human, and I think that there are more good people than bad. More people are willing to respond to the call if it's something they can do."