The Best John F. Kennedy Movies, for Those Missing the Sixth Floor Museum 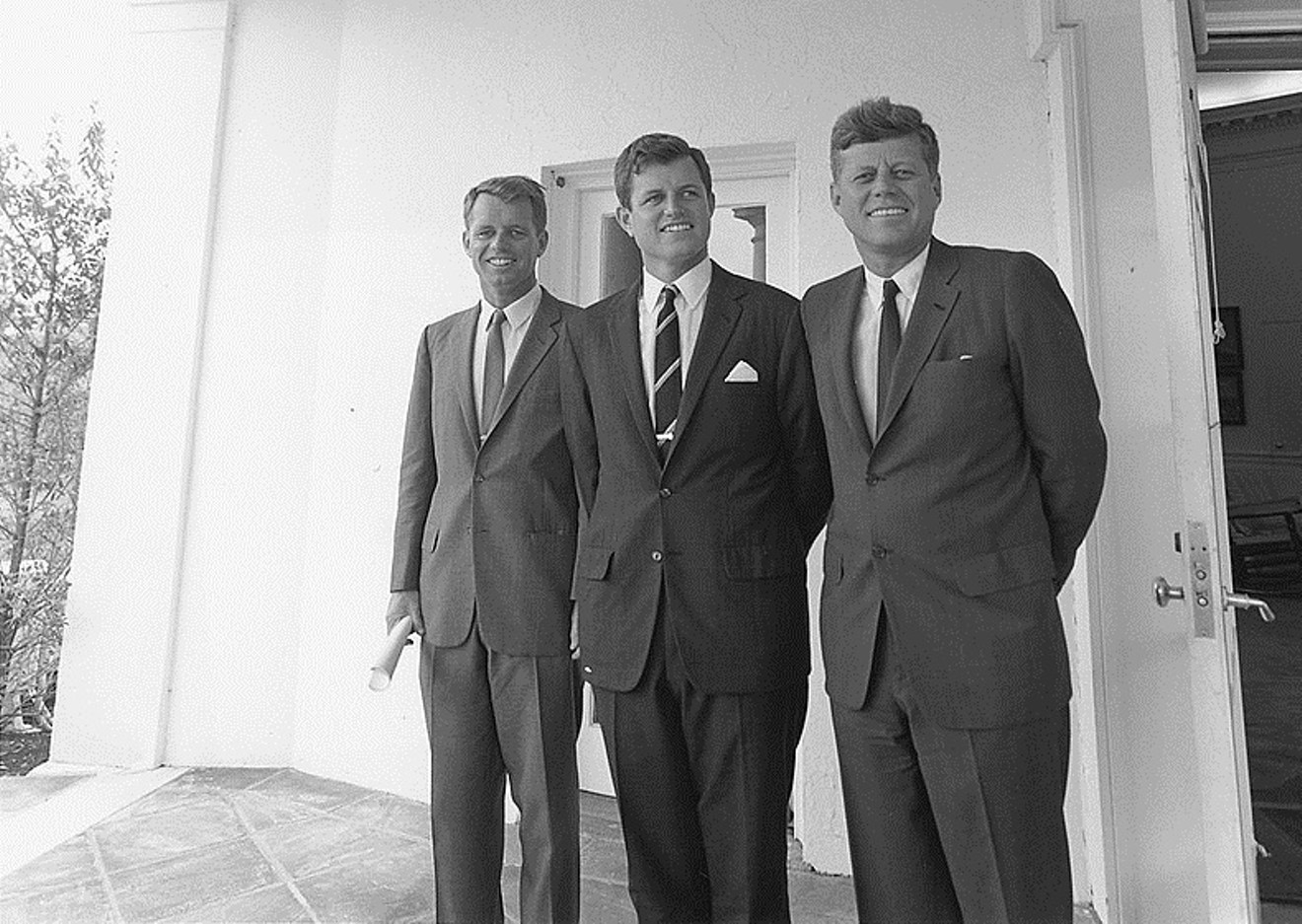 Kennedy brothers (from left) Bobby, Ted and Jack, outside the Oval Office on Aug. 8, 1963 Cecil Stoughton / Wikimedia Commons
Among Dallas’ museums, the Sixth Floor Museum at Dealey Plaza stands out as the rare foundation where history was actually made. Located on the sixth floor of the former Texas School Book Depository, the museum commemorating the life of the nation’s 35th president stands in the same place Lee Harvey Oswald fired his rifle on that fateful day of Nov. 22, 1963.

Yet, the museum is more than just a place of mourning fixated on one of the most shocking moments in American history. Entrants are guided by an audio tour that takes them through the life of John F. Kennedy, telling the story of his early days in Massachusetts, his service in World War II, his tenure in Congress, the noteworthy aspects of his presidency and how his three years in office would affect American politics and culture, generations hence. It’s a sight that reclaims the spot of one of the nation’s darker chapters and transforms it into a tool of learning.

Beyond the extensive information on Kennedy’s life, the museum is also a uniquely North Texan location, as it explores the perspectives of the Dallas residents who lived through the crisis back in 1963. However, like most cultural landmarks, the Sixth Floor Museum is closed indefinitely because of COVID-19 concerns.

This doesn’t mean that history buffs curious about the Kennedy era are completely out of luck. Many are using the coronavirus crisis as a means to catch up with prestige films and television, and the Kennedy era has been a point of fixation in Hollywood ever since that day in Dallas brought it to a close. Films and TV might not tell the entire story of JFK, but they provide perspectives that are useful in determining his legacy.

1. JFK
The JFK assassination isn’t just one of the most shocking moments in modern history, but it's also one of the most highly debated among conspiracy theorists, with theories about second shooters and latent conspiracies. Back in 1991, the three-hour epic JFK certainly offered one take on the persistent question of what really happened; if you ever wanted to know who was involved, how they plotted the killing, and why they did it, Donald Sutherland will explain it to you in the most iconic park bench sequence in cinematic history.

JFK is a classic from veteran film director Oliver Stone, the provocative filmmaker who has covered decades of hot-button American political issues throughout his filmography, from the Vietnam War (Platoon and Born on the Fourth of July), the evils of capitalism (Wall Street and its sequel Wall Street: Money Never Sleeps), violence and the media (Natural Born Killers), the Patriot Act (Snowden), and the tenures of Presidents George Bush (W.) and Richard Nixon (Nixon). With JFK, Stone imagines a “counter-myth” in which an unusually sincere district attorney (played by every dad’s favorite actor, Kevin Costner) gets to the heart of the conspiracy.

Gaining status with both Oscar nominations and a permanent spot on any list of “most controversial movies,” JFK isn’t a history lesson and won’t win over anyone on the fence about Stone and his films. What it does provide is an exploration of the need for answers that the assassination generated — the lack of firm details about JFK’s death continue to befuddle some people, and Stone’s assertion of a clear and direct culprit is (for him, at least) a form of closure.

2. Jackie
While much of the popular culture media surrounding the Kennedy years focuses on the man himself, there are works that take the time to explore the supporting players. Jackie is one such example. The art-house biographical film stars Natalie Portman as Kennedy’s widow and follows her life and mourning in the immediate aftermath of the assassination. Told in a nonlinear format, Jackie also gives a window into the first lady’s days during the height of Kennedy’s reign.

Among the interesting things about the film is that it considers Jacqueline Kennedy’s multiple roles — she isn’t just an American grieving her president, but a widow grieving her husband and a mother who must frankly explain the nature of death to her children. Drawing on the frequent historical interpretations of the Kennedy era as the “American Camelot,” Jackie takes a look at those who are left in King Arthur’s wake. Portman’s performance is the type of uncanny re-creation that is rare in biographical films, and the film is keen in exploring the responsibility thrust upon her to maintain the legacy of the larger-than-life figure that was her husband. As a feminist interpretation and a candid story of grief, Jackie is among the more novel approaches to understanding the Kennedy legacy.

While much of the popular culture media surrounding the Kennedy years focuses on the man himself, there are works that take the time to explore the supporting players.


3. In the Line of Fire
It took Hollywood only 30 years to take this historical tragedy and use it as the basis for an action thriller, but In the Line of Fire eventually came along to turn the anxiety surrounding political assassinations into the premise of a summer blockbuster. Perhaps In the Line of Fire would feel more exploitative if it wasn't so damn entertaining, as legendary German filmmaker Wolfgang Petersen (of Das Boot and Air Force One fame) elevates what could have been passable action schlock into a taut, incisive work of suspense.

Clint Eastwood stars as a disgruntled Secret Service agent who suffers from guilt and PTSD after witnessing Kennedy’s assassination in Dallas. Eastwood is of course called back into action when a sadistic former CIA agent (played by John Malkovich in an Oscar-nominated performance) attempts to carry out a similar plot to assassinate the current president.

There are no historical facts to be taken away from In the Line of Fire, and it's unlikely to be shown in many history classes, but what the film does provide is a window into the novelty of watching an American president gunned down on a national stage. A political assassination of that magnitude sent shock waves through the American consciousness and would forever change security measures and the perception of political figures’ mortality. So there’s at least a few deeper thoughts to consider while you root for Eastwood to kill the bad guy.

4. Mad Men
The landmark AMC series is often brought up as one of the early indicators of “Peak TV,” and the seven-season run of Mad Men sparked years of critical discussion, analysis and praise as it racked up an impressive 16 Emmy wins, including four for Best Drama Series. A fictional story of the Madison Avenue advertising agency Sterling Cooper, the series set its pilot episode in the year 1960 and ended its finale on the dawn of a new decade. Viewers got to watch iconic characters like Don Draper, Peggy Olson, Roger Sterling and Pete Campbell live and respond to the notable political and social developments of the American identity throughout the 1960s.

Any work of fiction spanning the '60s is expected to portray the ways in which Kennedy’s spirit cast a looming shadow, and Mad Men honored the 35th president with several episodes centered on key moments in his administration. The first season's penultimate episode, “Nixon and Kennedy,” revolves around a wild party thrown at the Sterling Cooper office on the night of Kennedy’s election and shows the reaction of the jaded white-collar men to Kennedy’s win. Season 3’s “The Grown Ups” follows each of the main characters through moments of self-doubt and trauma in events that happen to coincide with the day of Kennedy’s death.

The overriding theme of Mad Men was always the deconstruction of the myths of the 1960s. Beneath the pristine imagery of a booming America presented in advertisements was a decade of rampant sexual harassment, racial conflict, counter-culturalism and a devastating war that killed hundreds of thousands. It’s impossible to explore the era without exploring Kennedy, and Mad Men takes a look at the decade of change through the eyes of those who molded it.
KEEP THE DALLAS OBSERVER FREE... Since we started the Dallas Observer, it has been defined as the free, independent voice of Dallas, and we'd like to keep it that way. With local media under siege, it's more important than ever for us to rally support behind funding our local journalism. You can help by participating in our "I Support" program, allowing us to keep offering readers access to our incisive coverage of local news, food and culture with no paywalls.
Make a one-time donation today for as little as $1.