Cyanide & Happiness, Skybound Game Trial By Trolley Is Murdering on Kickstarter With $2.5M in Funding 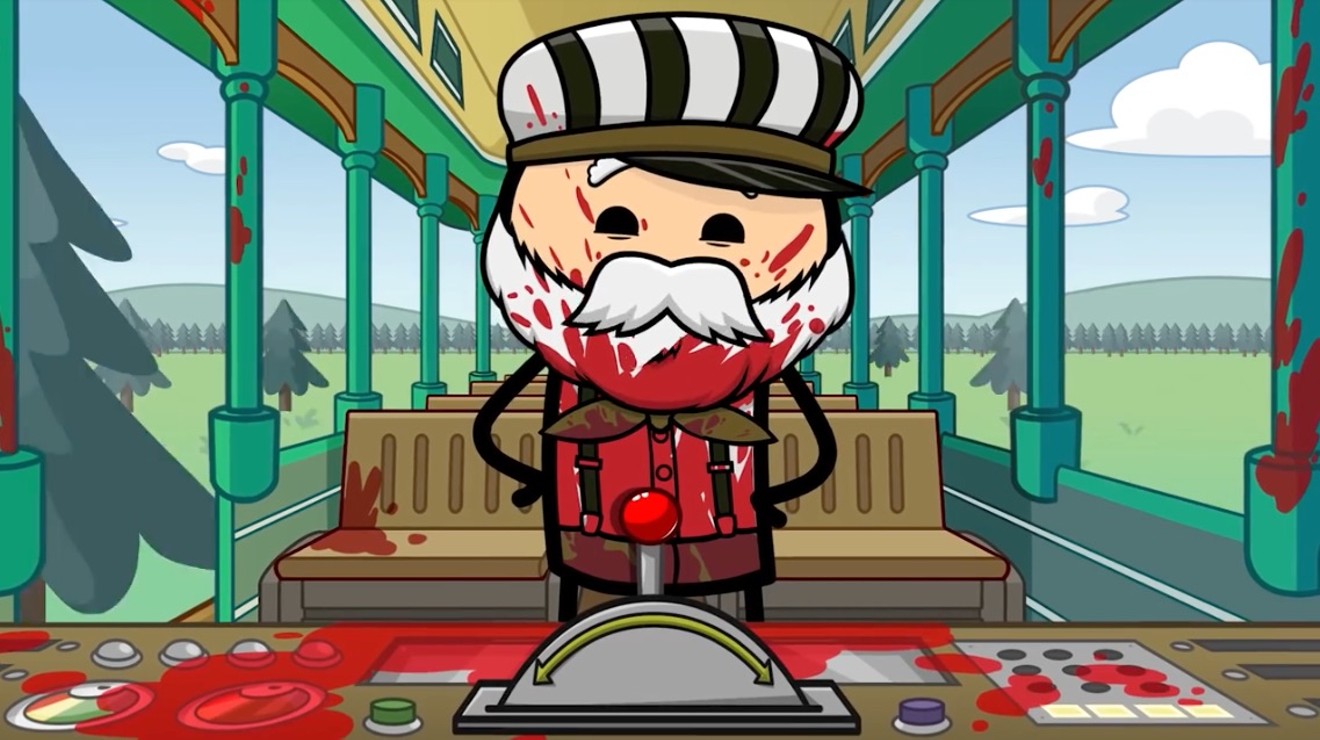 Both entities raised more than $2.5 million on Kickstarter with less than a week to go until the 30-day deadline.

"I don't think I've seen a company do a second project and surpass or meet the total of the second project," says C&H co-creator Rob DenBleyker, who created the cartoon and comic strip with Kris Wilson and Dave McElfatrick. "We're blown away."

But the massive fundraising total, which is still climbing, is the least surprising part of this project, at least so far.

Trial By Trolley forces players to argue to the conductor, also known as the judge, about which track they should pilot their runaway trolley down and whom they should murder in the process. One track could contain a crowded Mother's Day brunch party and the entire band Nickelback, while the other track could have the original "Mona Lisa" painting and an undercover ISIS terrorist. Players have to present their case and play modifiers on their and their opponents' track to get the conductor to choose the other path that they believe is the lesser of two piles of inevitable collateral damage.

Cyanide & Happiness co-creator Rob DenBleyker shows off a copy of Explosm Entertainment and Skybound Games' newest card game Trial By Trolley that will be in players' hands by the end of the year.
Danny Gallagher
Explosm has been promoting the game through a series of popular YouTube videos with the game's central character, Trolley Tom, an affable, old trolley driver who's forced to make deadly choices about the celebrities, characters and people he has to run over by switching the tracks on his runaway trolley.

"We thought if we're going to market this Kickstarter, let's do it in a way that's funny, instead of just ads and promos," DenBleyker says.

Viewers vote on which track Trolley Tom should follow based on who or what's going to get squished, like running over a balloon filled with Ebola versus "your own mother." Some of the choices come with the promise of more Kickstarter rewards and cards for people who plan to own a copy of the game. Naturally, the fans would also pick the option that would net them more cards, no matter how cruel the outcome, until the writers decided to put Trolley Tom's father on one track and all of the Kickstarter expansion packs on the other.

DenBleyker and his crew had to go to San Diego for an appearance at Comic Con, and they thought they had the next video planned until the usually cruel and cynical fans decided to give the virtual trolley driver a reprieve from pain. The players voted to run over their own Kickstarter expansions and spare Trolley Tom Sr.

Skybound first approached Explosm back in March at the Pax East gaming convention in Boston. They wanted to make an argument party game based on the old ethics experiment in which a person is controlling a runaway trolley that can't be stopped that will kill five people stuck to the track along its current path or can be diverted to a second track with only one person who will be inevitably slaughtered.


"We've never done a game this socially involved, and we haven't played a round that isn't funny." — Rob DenBleyker

The paradox created by British philosopher Philippa Foot has been one of the most debated hypothetical moral dilemmas for years and found mainstream exposure again in 2017 when the second season of NBC's The Good Place forced Chidi, played by Dallas actor William Jackson Harper, to make the decision in a very realistic looking scenario over and over and over again.

"We've known the C&H crew from the cons we would go to together," says James Hudson, the senior director of tabletop game for Skybound Entertainment in Los Angeles. "We were friendly acquaintances but when (game designer) Scott Houser pitched me this game idea and when I played it, I thought there had to be a game like this already in existence. So I did a deep dive on the internet, and I found out it wasn't."

Hudson commissioned a prototype of the game, but it needed more than just text of the trolley's murderous mayhem to make it seem less cold and dark since the images of the people and things being turned into piles of refuse would have to take place in the players' imaginations. So they approached DenBleyker and his team during the Pax East con with the game idea, and the two started a partnership.

"They wanted to dehumanize the game by making it cartoony," says Brett Vance, the marketing director for Trial By Trolley and Explosm's director of creative content. "They were worried about putting down something like 'Your grandparents' and then you're picturing your grandparents as opposed to something cartoony."

DenBleyker says he and his writers churned out around 200 scenario cards in their initial writing and drawing sessions and the next game in Explosm's to-do box started moving forward. The Kickstarter launched a little under a month ago and the response has been overwhelming even by the standard they set with Joking Hazard, Explosm's first adult party card game released in 2016 that also launched thanks to a successful Kickstarter campaign in which players create the funniest, three-panel comic strip using two of the disposable stick characters from the C&H universe.

"I'm not surprised," Hudson says, referring to the massive response and funding raised for the game. "I know how fervent the C&H crowd and their audience is. They do a great job of engaging their audience, and people who love C&H love their stuff. It's not surprising to me. What is surprising about the campaign is how much people have latched on to the Trolley Tom narrative. It's refreshing to see people get really invested."

DenBleyker and his team at Explosm Entertainment are using a prototype software from Adobe called Character Animator to create a regular series of videos that capture Trolley Tom's facial expressions and movements through a webcam while a voice actor records the dialogue.
Danny Gallagher
Explosm has been releasing a slowly expanded story featuring Trolley Tom that's acted and voiced by actor Joel Watson who's forced to make some of the same tough choices as the board game over the course of the Kickstarter campaign. Tom makes his choice by the votes of the viewers, which could potentially net them more expansions for the game depending on their choices. The story recently took a darker turn when evil arch-nemesis Tram Sam, voiced by Funimation anime voice actor and director Christopher Sabat, took over the controls for the trolley and the entire Kickstarter campaign using a new prototype software from Adobe called Character Animator that captures an actor's facial expression and mouth movements through a webcam while they are recording their dialogue.

"It lets them feel involved," Vance says, "because they literally are."

DenBleyker says Trial By Trolley is the next inevitable evolution of their board game empire that builds on the successful innovations and mechanics of Joking Hazard. This time, the jokes don't just come from the cards. They come from the players as they try to think of ways that society would be better if actor Tom Hanks or beloved PBS painter Bob Ross get run over by a trolley.

"In this case by contrast, it's all about arguing and saying, 'No, no, no, you don't understand. You need to run over Santa Claus,'" DenBleyker says. "We've never done a game this socially involved, and we haven't played a round that isn't funny."
KEEP THE DALLAS OBSERVER FREE... Since we started the Dallas Observer, it has been defined as the free, independent voice of Dallas, and we'd like to keep it that way. With local media under siege, it's more important than ever for us to rally support behind funding our local journalism. You can help by participating in our "I Support" program, allowing us to keep offering readers access to our incisive coverage of local news, food and culture with no paywalls.
Make a one-time donation today for as little as $1.