Best place to read a newspaper

There are few distractions at this small, cozy coffee shop in Arlington. With more than 30 coffee flavors to choose from, this is the place to relax and read about the world's myriad tragedies. The coffee stand also includes sandwiches, salads, and cakes. And there's a computer nearby for Web surfing. Coffee is ground and brewed there and then.

The new one, lit up by Der Mayor on New Year's Eve, is pretty enough--a glossy neon vestige brought back to life in a downtown trying to breathe life into its concrete shells (lotsa lofts, but we'll see if it makes a difference). But the original, sitting in a Farmers Market shed, is still a sight to behold, especially up close. The first time we saw it, we were shocked. It took us by surprise--we knew it was there, but it had slipped our minds--so we stood there for an extra moment or two, ogling this piece of local history. Aside from a little rust and ruin, it looked somehow more majestic in the shed than it had when flying atop downtown--you could touch it, and touch history. Whether it qualifies as "sculpture," well, we're not qualified to say. But it's Dallas' real art, with a capital "he." 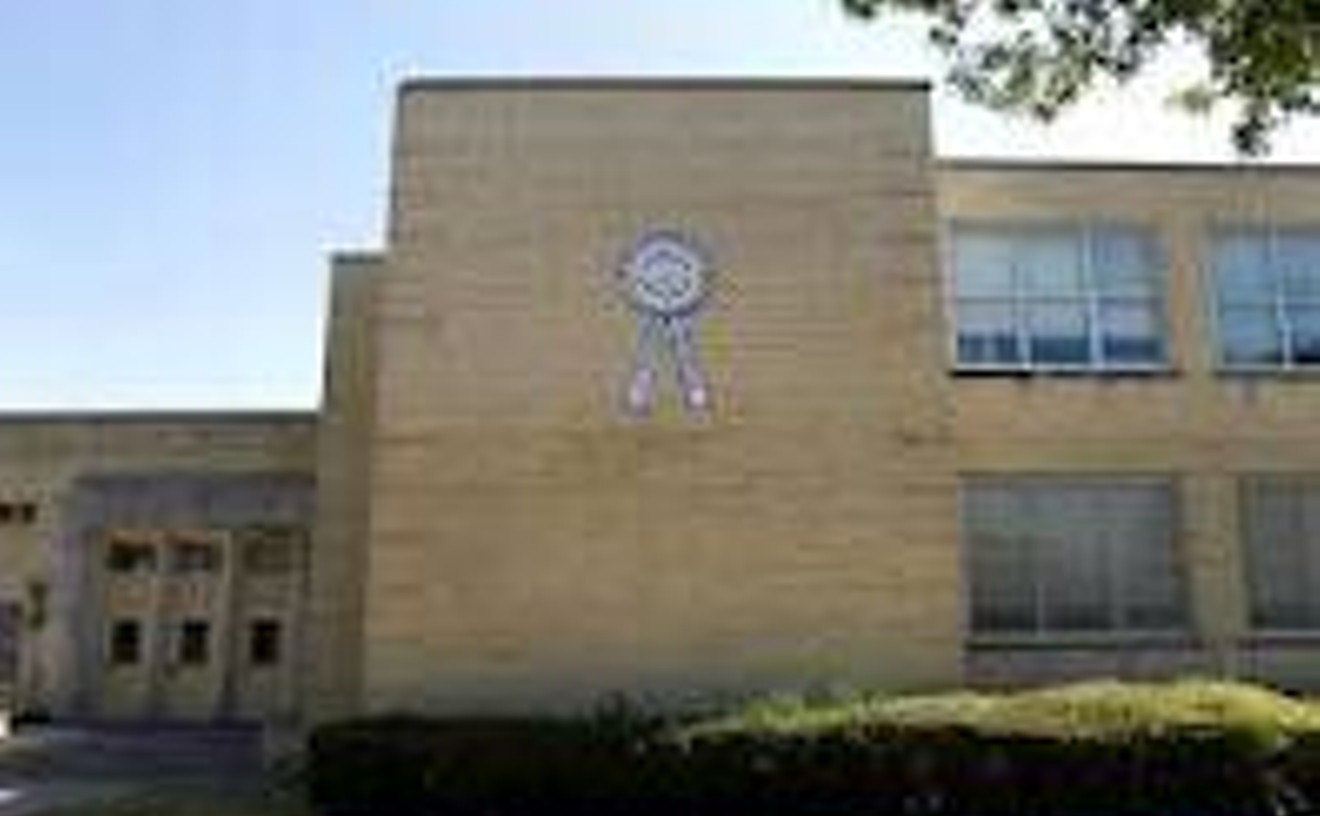 While the Dallas Independent School District talks about splitting into three (we think they ought to use dynamite rather than a bureaucratic blueprint) to deal with their woes, it's nice to cite an example of what is good within DISD. Stonewall Jackson Elementary School has received the exemplary school status on the state level, and the blue-ribbon school status on the national level. Their annual celebration of international cultures helps to teach inclusiveness at an early age in a city where ethnic clashes can create political headaches.

You gotta be kidding

Yes, we're pulling another cop-out, but come on, there are many damned fine galleries here, and our favorite changes with each new show. It would be fruitless to list one each here along with its respective virtues. Some good starting points include Pillsbury and Peters Fine Art, the McKinney Avenue Contemporary, Photographs Do Not Bend, Conduit Gallery, Barry Whistler Gallery, Dunn and Brown Contemporary, and Craighead-Green Gallery. Plus, it seems a new gallery is opening every few months in downtown and Expo Park alone. So get out and judge for yourselves.

Best place to walk on water

You don't have to be You Know Who to walk on water in Fair Park. Two large, plant-inspired sculptures arch, curve, and twist over the still lagoon, creating stairs and walkways for getting a closer look at turtles, water bugs, and the occasional fast food container lurking below the surface. A low tide, shoes with good traction, and a healthy equilibrium is suggested to keep you from getting baptized in the murky waters.

Covering international beats is a cool but challenging gig, especially considering the void of interest in international relations endemic to the American public. Bringing compelling tales from or about foreign lands to the pages of local newspapers is a good vehicle to get people to shed their back yard mentality. Timothy O'Leary hopscotches the world in search of dramatic conflicts or radical change. In the last two years he's filed stories from Ireland, Greece, and India. His coverage of the most recent Mexican presidential election, including an appealingly sheepish column regarding his botched prediction that Vicente Fox would lose, brought simple analysis of the attitude of the Mexican people as seen from the ground. His columns are admirably free of self-indulgence and written in a traditional, accessible style. Sure, it's a good gig, traveling the world and filing an average of seven stories a year. But if done right, a good international columnist can bring to the readership a glimpse of life beyond U.S. borders, a sorely needed acknowledgement that Dallas is just a small part of a big world.

He hammered Bill Rojas and his overpriced posse of headquarters bureaucrats, then came up with what could be the scoop of the summer: sleazy back-scratching judges down at the civil courthouse. What's cool about Shipp is that he's so nice while he's capping those knees. Rather than huff and puff himself up as a crusading investigator, like so many others in this market, he delivers the goods in an almost self-effacing tone. Good and humble. It's a surprise he's made it in TV news.

What? James Fantroy the best city council member? A man who was seemingly handpicked by the felonious Al "Big Daddy" Lipscomb to fill his seat? A man whose first business was operating a liquor store? A man who operated a security company without a license for years? Well, he's new, and he hasn't had a chance to screw up yet. That fact differentiates the 62-year-old Fantroy from his peers on the council. He remains a blank slate, unlike bumbling jester John Loza, sanctimonious vigilante Laura Miller, and clueless Alan Walne. Their preenings and snide broadsides fired around the horseshoe leave little choice but to give the new guy a pass and a pat on the back. Give him time--we're pretty sure he'll put his foot in it soon enough.

Many, many people are going to think this one definitely has to go to our recently departed short-timer school superintendent, Waldemar Rojas, if not for the unforgettable "tin-cup" episode, then for some other installment in his Bosnian-style public relations career in Dallas. But we get into a technical area. Strictly speaking, good gaffes can't be done by major-league wackoids. Those aren't gaffes; they're symptoms. A really good political gaffe has to be a case of pure-D, wrong-way, dumb-head, boy-oh-boy stepping-in-it by people who really shoulda known better. For that, the big Year 2001 Ark of the Holy-Moley Best Political Gaffe of the Year Award definitely goes to Dallas Mayor Ron (Pothole) Kirk and fellow city councilonians Maxine (Doctor-Doctor) Thornton-Reese, Don (Down) Hill, Lois (What a) Finkelman, Barbara (I hate Laura) Mallory-Caraway, Herb (Who?) Walne, and Mary (Very) Poss for voting not to use a $50,000 gift from ExxonMobil Corp. to repair a wading pool in an impoverished neighborhood. Later, of course, they all ate big-time crow (ummm, yummy!) and voted to fix the pools, but only after having waltzed themselves deep into some shoe-staining-type political shit. Note to selves: "Supposed to kiss babies, not kiss them off."

There are other better-known and better-funded theater companies offering classes to children, but dollar-for-dollar the Richardson group offers the best value. The six-week sessions end with your children in professional and actually enjoyable productions. Most of the kids on stage appear to have learned how to act. The adult repertory actors perform the major roles, making the theatrical occasion a satisfying (as opposed to merely a pride-filled) moment.