The Toadies' second album is finished

No, it's not out yet, and God only knows when Interscope Records plans on releasing it, but Toadies Album No. 2, Stars Above/Hell Below, is finished, a mere six years after Rubberneck hit the shelves. Sure, it's not like the band spent all of that time in the studio--Rubberneck didn't even become a hit until almost two years later--but still. Maybe one day, they'll look back on this and laugh. Nah, probably not.

When local singer-songwriter Colin Boyd sings Johnny Cash's "Ring of Fire" during one of his various regular engagements around town, you'd swear he'd gotten the song mixed up with James Taylor's "Fire and Rain." In fact, no matter what song Boyd happens to be singing, you'd swear he'd gotten it mixed up with a James Taylor song. The fact is, Boyd makes Jackson Browne sound like speed metal. We've seen stains that are tougher. Maybe it's not that big a deal when Boyd is running through a cover of, say, Christina Aguilera's "Genie in a Bottle," but when he's tackling The Man in Black's body of work (during a recent appearance at St. Pete's Blue Marlin, Boyd offered versions of "Ring of Fire" and "I Walk the Line," and we were only there for a half hour), we must take exception. It's like watching Hugh Grant star in a remake of The Searchers. No thanks.

For those who adored the movie Love Jones, there's a Dallas spot that'll set the mood for your poetry. On Sunday nights this little hole-in-the-wall turns the lights down low, lights the candles, fires up the kitchen for a veggie delight, and turns the microphone up. This is a great place to go and relax to the sound of the rhythmic voices of novice poets. The atmosphere is electric, and the talent is vast.

Conduit's Annex Gallery would be considered roomy if there were, say, pants and shirts hanging in it instead of art. Never let it be said, however, that the Annex Gallery didn't make the most of its limited space. Like its counterpart, Conduit Gallery, Annex has opened itself to some of the brightest up-and-coming artists, including the first show by members of Denton's Good/Bad Art Collective in Dallas. As time goes by and a new layer of paint is added every six weeks, Annex only grows smaller, but it'll always have big ideas. 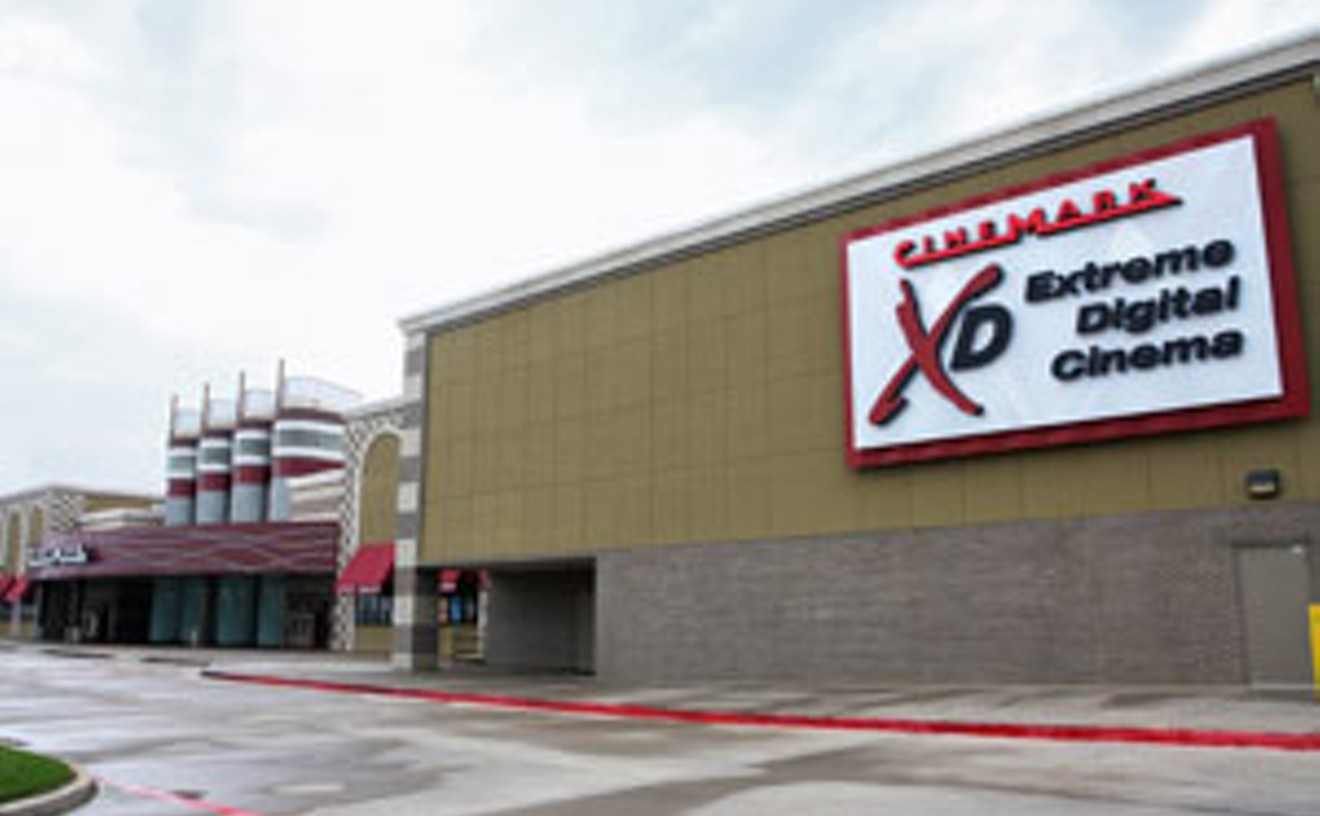 The other day, we were reminded of how little this title really means: We were driving past NorthPark and passed all that remains of the NorthPark I & II, which has been rendered a shell of its former glorious self. Soon enough, the building will be torn down and replaced by a department store, which is the last thing this town needs more of (Dallas is French for "mall"). Ours was a happy childhood spent waiting in line at the NorthPark I & II; it was where we saw Star Wars and Superman for the first time, spread out from wall to wall in a theater where space was the final frontier. But in the city that spawned the googaplex (the AMC Grand, with its 24 screens, was once the largest theater in the country), the NorthPark I & II was deemed a dinosaur, and all that remains are the bones. Until the Angelika and the new Landmark art-house multiplex open up at the end of the year, we're left only with decaying vestiges of grandeur (the Inwood, which we'll always treasure), the last gasps of intimacy (the AMC Highland Park, where every theater feels like your own screening room--or TV screen), low-frills gourmet movie-going (the Granada and its dine-out spawn), and the megaplexes, with their stadium seating and chicken-strip cuisine. The Cinemark 17, with its new IMAX add-on, is the best of the lot. Every seat's a winner, the "coffee shop" in front serves up a tasty movie-food alternative, the arcade makes for a great time- and dollar-waster, and, oh yeah, you can see some movies if you're up to it.

OK, we hesitated about this one. Sometimes the only listener we'll concede that Mitchell deserves during one of his more lackluster afternoons is Dan from Tyler, a regular caller to various public radio shows. Then again, finding five scintillating topics a week (and exciting speakers to discuss those topics) is no small undertaking. At least once or twice a week, Mitchell hits his stride, and he invites a well-informed guest and asks him well-informed questions. We favor the times he reads something in a mildly erudite periodical (The Nation, The National Review) and invites the author to discuss the subject.

We must admit a certain bias toward neurotically flamboyant actors--not the Sarah Bernhardts and John Barrymores of yore, who took theatrical polish and scrubbed themselves till they bled with the effort of universalizing tragedy in ridiculous booming voices. We speak of those who have taken the so-called Stanislavskian Method of psychological detail and self-exploration and turned it into a parade of confessional tics and alienated affectations. But then we watch a consummate professional who needn't gesticulate eccentrically or break the dialogue into chewable staccato chunks, someone who can create wholly different characters without the birth pains that plague more stylized performers, and we are reminded that minimalism has its rewards too. Beverly May, an Obie-winning veteran of many Broadway and off-Broadway productions and a former member of Adrian Hall's ensemble at the Dallas Theater Center, seems at once calmer and more passionate than virtually everyone else with whom she shares a stage. She would have been an easy choice for the title role of Mrs. Klein, the story of imperious Austrian psychoanalyst Melanie Klein, who fought private and professional wars with her degreed daughter and who may have driven her son to suicide. This Melanie Klein manqu disturbed, disgusted, and touched us without Beverly May once revealing the actor's agenda. That's the most sublime illusion theater can create. If you're thinking that our selection of Susan Sargeant's Wingspan Theatre is exclusively because of May's performance in Mrs. Klein and in Grace & Glorie (when she played an illiterate Appalachian woman), you are partially right--except that Sargeant is no slouch as an artist herself. The best show at the Festival of Independent Theatres, Only Me, was Wingspan's. Sargeant has a knack for picking material for all-female shows whose shelf life isn't limited by its own doctrinaire concerns, such as The Last Flapper, her smashing one-woman show about Zelda Fitzgerald. Political art can be powerful, as the poet James Merrill once observed, but once another cause comes along, the words begin to smell like they're rotting. We hope Sargeant and May continue their association in the future.

Before besting a miserable field in District 8, James Fantroy told constituents at a debate this spring at Singing Hills Recreation Center that people in his district are worried about being poisoned by water siphoned specifically to South Oak Cliff from the spill-infested Lake Tawakoni. Paranoia is always one of our favorite traits in an elected official. It's even more fun when it's spiked with racial overtones. No wonder nobody votes in this town. It's kind of a logical choice to simply bag it and go to a movie.

The DMA does not win by default. Dallas' one and only combines the best aspects of art museums from across the metroplex. It has the regional art and historical objects of the Amon Carter and Kimbell. It showcases new talent and cutting-edge, contemporary works as do the Modern Art Museum of Fort Worth and the Arlington Museum of Art. Its large, continuously displayed permanent collection puts it over the top, allowing it to highlight acquisitions in special-themed exhibits and retrospectives. Plus it looks ahead with community-centered exhibits (Dallas Perspectives on Art and Religion, its home companion to Seeing God: Art and Ritual Around the World) and its Concentrations series, which has focused on young artists such as Annette Lawrence, Shirin Neshat, and Richard Patterson.

If you had bought Theatre de Marionette season tickets for the little ones this year, you could have assured them of seeing fun, professionally done, European-style puppet performances of such kiddie classics as Pinocchio, The Little Mermaid, Aladdin & His Lamp, Peter Pan, and The Littlest Angel. This is not Freddie the Clown or Howdy Doody stuff. Russian puppetry artist Tina Gromova, who toured Eastern Europe and Asia with the renowned Moscow Puppet Theater, is this year's headliner. Recommended for kids 3-4 years old and up. Individual tickets are still available: $8 for adults, $7 for children.