Best Bar for Kicking Back

This beautifully restored hangout is one of the best places to buy mixed drinks, or as their ads say, "classic cocktails," in Dallas. Unlike the party-hardy scene in Deep Ellum and Lower Greenville, the Meridian Room is a great place for real camaraderie, not drunken blowouts. The Exposition Park neighborhood near Fair Park is still a fringe-y area best known for Forbidden Books and a Wiccan church (or temple?), but places like the Meridian Room and Hungree's (a nearby sandwich joint) are making the area a draw for those of us not yet into witchcraft.

Best Place to Get Wet

For the price, this can't be beat. A mere $3 will get you into the Plano city water park, and children six and under are admitted free. This park with slides, fountain-filled train rides, dumping buckets and a zero-depth entry ramp meets all the standards set by its more expensive private cousins. An indoor pool is also available at the same location with 50-meter swimming lanes. The hours at this place vary by season, so be sure to call in advance.

Best Movie Pitch Worth the Wait 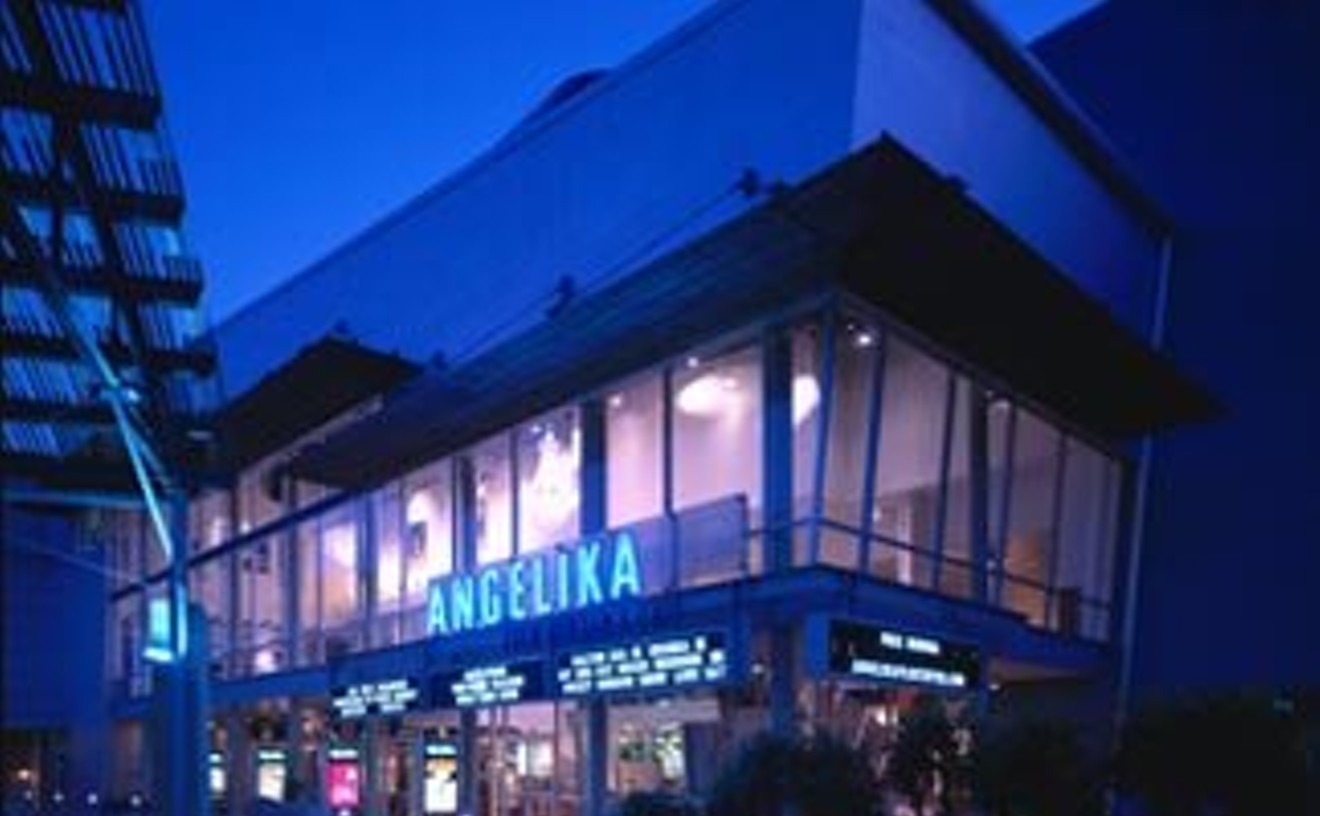 We can see the screenwriter (or producer, or director) making his pitch to the studio exec: "It's a movie theater, see, where we show nothing but art-house movies. Indies, the kids call 'em. Yeah, yeah, I know. It's a...whaddya call it?...a niche audience. Perfect. Narrowcasting, can ya dig? We'll give 'em L.I.E. and Bully and lots of other movies with bad language and teen sex. And the theater will be a glistening gem, unlike anything Dallas has ever seen. Eight screening rooms, all with stadium seating. And we'll put it near a DART station, a Virgin Megastore, an Urban Outfitters and a buncha other retail and restaurant joints that only Dallasites think of as 'exotica.' Only it's not just a movie theater, see, but a real restaurant where patrons can get grilled chicken sandwiches and prosciutto-wrapped figs and cappuccinos. And in the role of chef, we'll get...oh...Lisa Kelley. You mighta seen her at Parigi. Or maybe Meryl Streep, we'll see. Look, this is a sure-fire hit, man--solid box-office, like Mel and Danny in Lethal Weapon. It's the mismatched couple: movie theater and gourmet food! They'll eat it up."

The town of Coppell doesn't exactly come to mind when thinking about the Disneyland of outdoor play spaces. But nestled within the 148 acres of Andrew Brown Community Park East is a veritable imagination plantation that can soothe the hyperactive souls of children of all ages. At Kid Kountry, they can board a pirate ship or climb up a castle wall; they swing and slide their excess energy away as Mom and Dad stay cool--or at least cooler--under shade trees. During the summer months, the aquatics center is next door, and jogging trails and a small lake add to the bucolic setting. For the security-conscious (and who isn't these days), the playground provides a high fence to separate your li'l darlin' from the outside world. Which should make the outside world a safer place.

Best Place for a Kid's Party 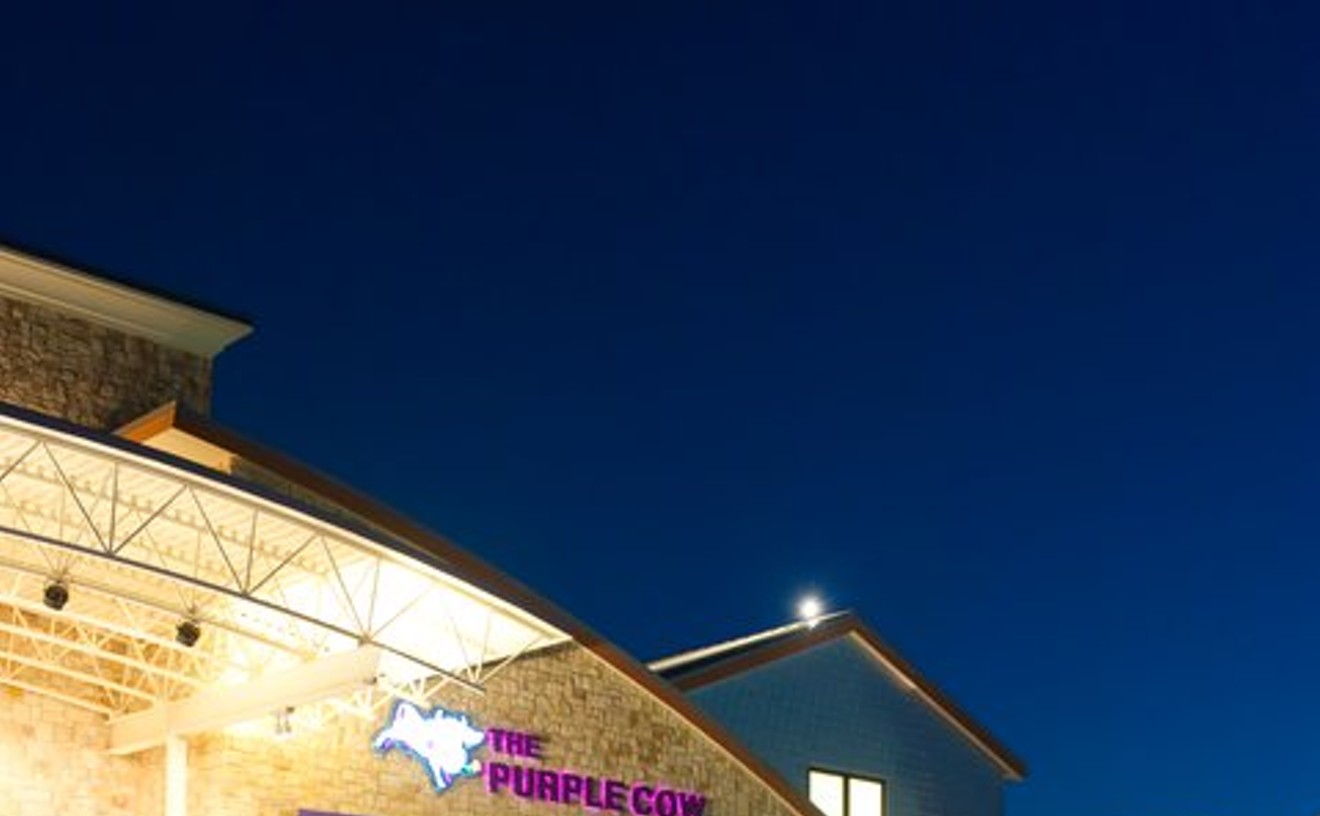 You know how you know a place is a favorite for kids? When it's a 30-minute ride to get there, and the munchkin goes insane with glee when you mention the possibility you could go there for lunch. The Purple Cow gets just such a reaction. This restaurant, styled after a 1950s soda fountain, is a favorite for parties because the kids can eat purple ice cream and get really loud, and parents can dull their frazzled nerves with spiked milk shakes. The standard American fare is passable for adults, but the kids love it. Earplugs aren't included.

The observation park at DFW Airport

On those rare occasions when a north wind blows, we know to pack up the kid and his toy airplane collection and race to DFW Airport's observation area, where he'll see jumbo jets--747s, A340s, 767s, L-1011s and DC-10s and the many smaller varieties--practically landing on top of him, and he'll watch the results of those tiny, precarious adjustments the pilot makes just a few feet from the end of the runway as he's coming in to land. (You'll also notice that it takes forever for those ancient 727s to get off the ground.) You probably didn't even know this "Founders Park" existed, with its panoramic view of the airport's east runways and piped-in control-tower chatter. But a few of us have found it, and it's perfectly suited for an outing with a plane-obsessed child (or adult). It's almost entirely fenced in, and it has picnic tables, litter-free grass and lookout binoculars (very blurry; we suggest you bring your own). Hey, and it's all free. To get there--DFW doesn't make it obvious--take the south entrance to the airport and follow the signs to the south shuttle parking area. Go past it and keep following the road until you reach an overpass. Turn left before the overpass, and you'll end up at the park. You can watch outside or in your car. It's best to come when there's a north wind, because the planes approach from the south and land right in front of you. Other times, you get a better view of the takeoff. (At press time, Founders Park had survived the new security measures at DFW and remained open.)

Some galleries trumpet their so-called hot artists with more pageantry. Other spaces are more conceptually ambitious (Angstrom). One has an indisputable track record that marries respectability and quality (Barry Whistler). And some have more consistently solid shows year-round (Photographs Do Not Bend). But Joe Allen's Purple Orchid and Randall Garrett's Plush--not necessarily a joint venture, though they share the same entrance--have one thing that has singularly enlivened the Dallas art scene in their two-year existence: reckless, unadulterated enthusiasm. Willing to try anything once--and maybe twice if it went poorly, just to make sure--exhibitions at Purple Orchid and Plush are frequently as mind-numbing as they are mind-melting, but that's part of their charm. They provide a ribald reminder that there's more to a gallery than pushing the work off the walls and into the homes of Highland Park.

Anticipating disagreement and dissent, please allow us to make one thing nice and sparkling clear: We feel your scorn, and we accept it. With something as subjective as art, you have to go with your gut, and this year ours points to sculptor and occasional armchair comic Erick Swenson. The University of North Texas graduate's delicate, surreal creatures would read like imaginary natural history dioramas if you could intellectualize them past their beauty, but usually you're left picking up your jaw off the floor. Plus, his activity over the past year has taken place outside of the area, warranting nary a drop of local ink. Swenson was part of the three-person, season-opening show at Chelsea's Andrea Rosen Gallery last fall alongside Keith Edmier and Australia's burgeoning art star Ricky Swallow. His new piece in that exhibition--"Muncie," his second cape piece following the breathtaking "Untitled (Cape Piece)" that debuted at the Modern Art Museum of Fort Worth's spring 2000 exhibition, Natural Deceits--was purchased by the San Francisco Museum of Modern Art. One of his earlier works, "Edgar"--which comes from his most recent local solo show, 1998's Obviously A Movie at the Angstrom Gallery, which represents him--was included in The Big Id group show at New York's James Cohan Gallery this past spring. Swenson's latest piece--another untitled work that features a rug he meticulously crafted out of plastic that looks lush enough to nap upon--is on view through November 4 at Sydney's Museum of Contemporary Art in a two-person show with Swallow, who chose Swenson for the exhibition.

As important as Martin Sherman's Bent is to the world stage canon--it was one of the first major works in any field to acknowledge the Third Reich's persecution of gay men--the play hasn't aged terribly well. It's didactic, melodramatic and sensationalistic--or can be, in careless hands. John Templin and Jeff Sprague, co-founders of Fort Worth's Sage & Silo Theatre, didn't attempt to liberate Bent from any of its excesses. Indeed, they added a new one worthy of Max Bialystock and Leo Bloom--Chris Steele, Dallas-based star of international hits like Uncle Jack and Steele Pole. Steele spent a good 10 minutes strolling the stage buck naked before his throat was cut by an SS officer. He wasn't bad, although it's difficult to judge objectively: He had more tan lines than stage lines.

Casper The Musical Stinks Up the Music Hall

Based on our childhood memories of the cartoon series, we thought Casper The Friendly Ghost was about life after death, not the messy business of dying. This summer's four-city tour of Casper The Musical crawled into Dallas with vital signs barely registering and proceeded to meet a very long, noisy, smelly demise on the stage of the Fair Park Music Hall. Writers David Bell and Stephen Cole did a major overhaul from the show's disastrous London premiere, adding a scenery-chewing role that Broadway legend Chita Rivera stepped into between legit gigs. The subplot about reality-based TV programming and the World Wide Web--Casper is in danger of becoming a media mogul's pawn--was as inexplicably tacky as the flat, foldable sets.