The Library at the Melrose Hotel 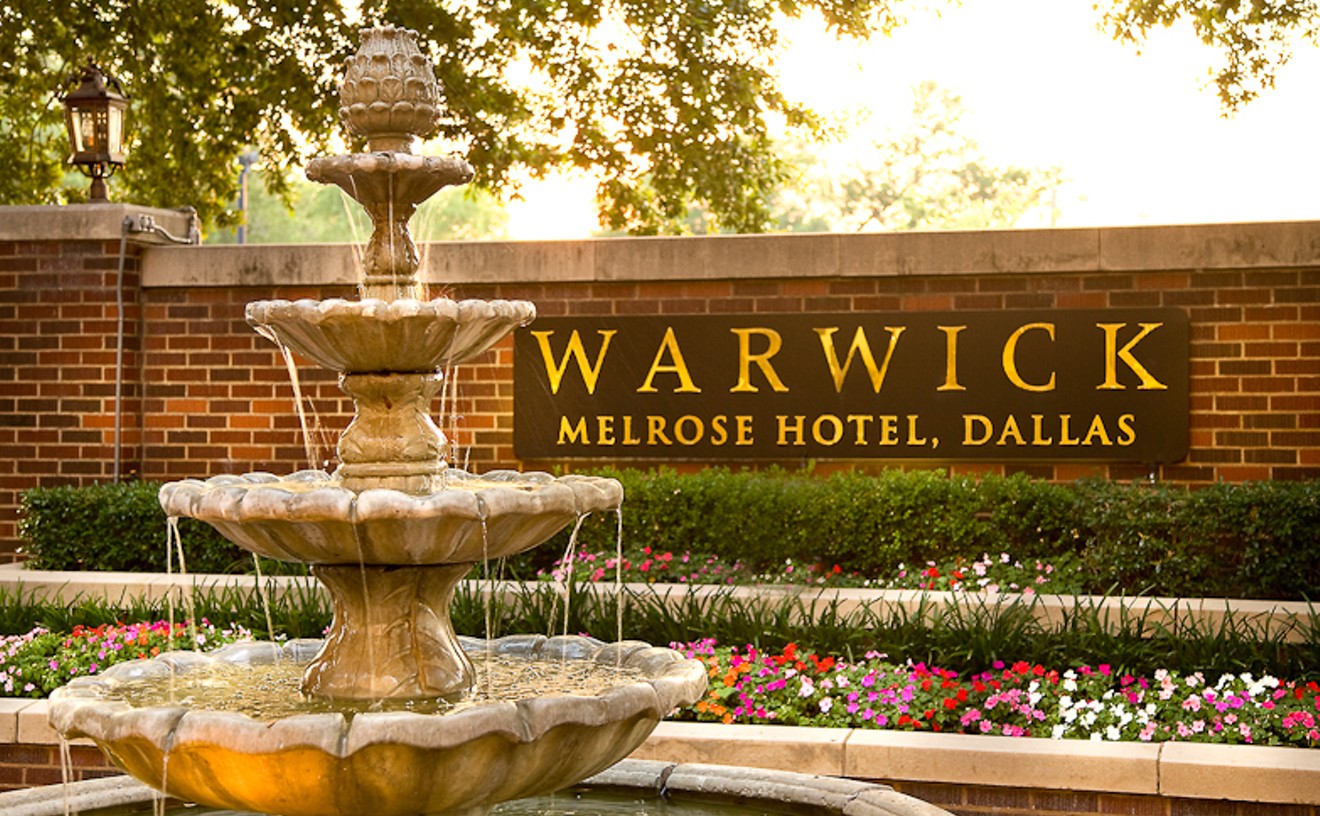 We're purists. A martini can contain only three ingredients: gin, vermouth and a garnish. It's the quintessential sophisticate cocktail, with subtle but sublime flavors--crisp and bracing, herbal and aromatic. Made carelessly, however, a fine martini can become a slurry of gin and ice. Good martinis come from bartenders who ask questions: How dry? Rocks or up? What garnish? What gin? And (despite the 007 cliché) shaken or stirred? Weary of bad martinis served by the cavalier, we've taken to giving orders. The cocktail served us at the sophisticated but comfortable Library Bar came just as we ordered: clear as a diamond, in a pre-chilled glass, an exquisite medium-dry martini, up with a twist, stirred. It made us think of a line from Hemingway's A Farewell to Arms: "I had never tasted anything so cool and clean. They made me feel civilized."

There are some good things about Dallas and North Texas, but the landscape ain't one of 'em. For the most part, the area is bereft of any aesthetically pleasing vistas. Fortunately, we have White Rock Lake to keep us from forever cursing the concrete jungle. In the morning, the sun rises (from the east, for the direction-impaired), illuminating the city skyline; in the evening, it sets behind downtown and lights up the water. Either way, you can't lose. Unless, of course, the muggings start up again, at which point you're on your own. Enjoy the view, but be wary of dirtbags lurking in the bushes.

Best Way to Feel Like You're in a Real Downtown

The Shops at Legacy 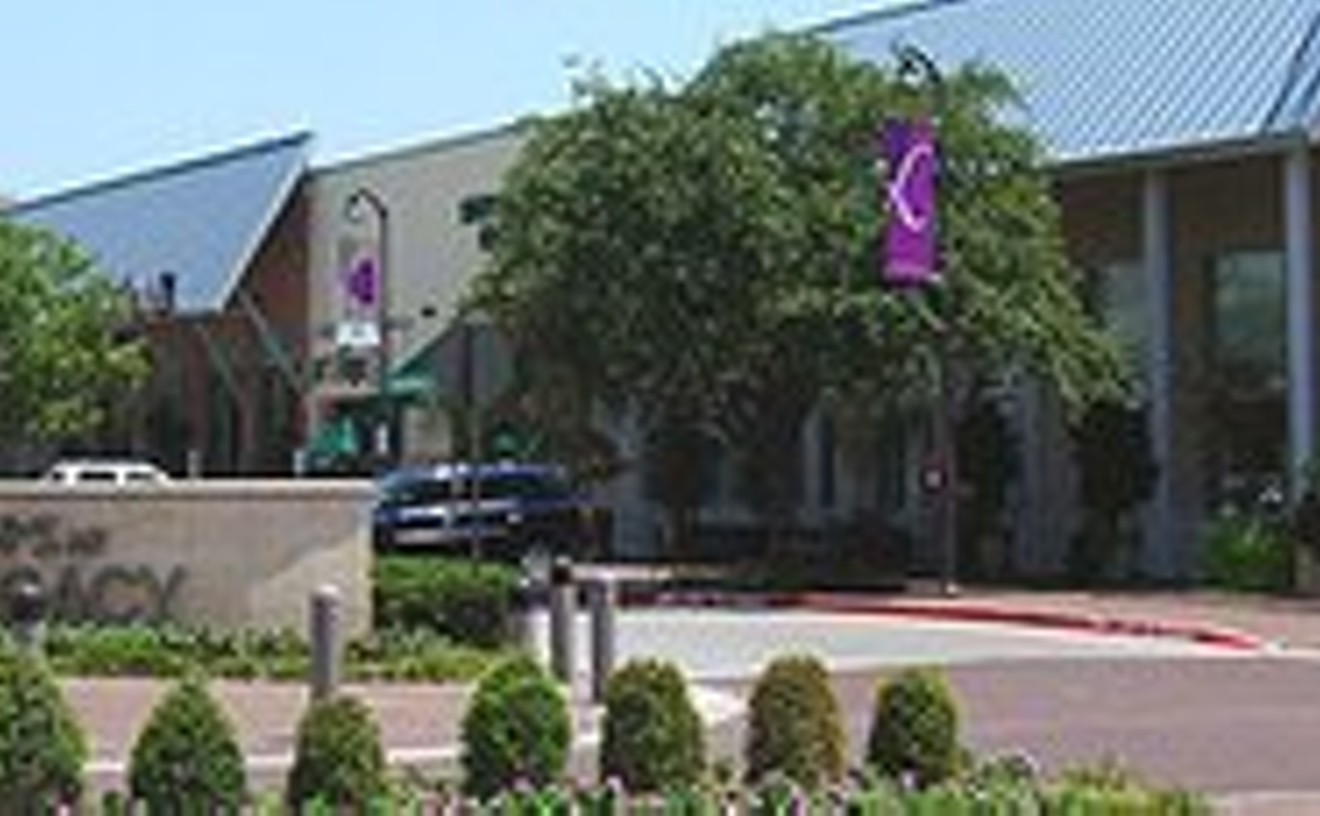 That's right. Plano. Straight up the Tollway, north of that dreaded Interstate 635 barrier, where they've reconstructed the convenience of an old-fashioned downtown without those "colorful" elements. You know, grime, panhandling, the frantic search for parking, the threat of sudden death or dismemberment. The Shops at Legacy offers a choice of street parking, valet parking or well-lit parking garages. Listen up, Dallas: parking. People walk--walk--to dinner (Bob's Steak and Chop House--the one with legal cigars--Jasper's, Naan or one of several other options). Afterward they grab a glass of vino at Crú or stroll over to the Angelika. If they want coffee, there's (gasp) Starbucks. Oh, and bakeries, banks, stores--even a barbershop. Didn't take them long to build the sucker, either. And they managed it all without a signature bridge.

Best Bartender Who Can't Hold Down a Job

Over the past four years, Mark Giese worked at Il Sole, Salve!, Bali Bar, Paris Vendome, Dralion, Passport, Nikita, Spike and now the bar nestled in Tom Tom's extension. Some of these stints lasted a few months. In a few cases, he parted ways after a handful of days behind the bar. Between jobs he travels around the country until exhausting his cash, then heads back to find a new setup. Yet he's quick, personable--a solid bartender, respected enough to open one-time hot spots Passport and Dralion. With several fine-dining restaurants on his multipage résumé, he knows something about food service and wine, too. Just visit him quickly at Tom Tom, before he moves on. Unless, of course, he's settled in behind a new bar between the time this piece hit the printer and the ink dried.

Part of Best of Dallas' challenge each year is finding new categories for Premiere Video: "Best Video/DVD Store" (2003); "Best Place for a Cinephile With Loose Change" (2002); "Best Too-Hip-for-Blockbuster Video Scene" (2002); then, "Best Sour Grapes" in Buzz, 2002, because they got so mad at us that year for not winning "Best Video Store." So what's best about them this time? Actually, something special takes place there every Friday and Saturday night--the global in-gathering of the East Dallas intellectual ethnic group. C'mon. East Dallas is an ethnicity. You could spot one of those types coming at you from the far end of a long corridor in Newark Airport. Sure. There's one comin' at us now--an East Dallas pop-bottle flip-flop zombie. Well, see, Premiere Video on Friday and Saturday nights is where these people meet and get their instructions!

Tearlach Hutcheson doesn't vote. Hasn't in 14 years. Actually, he's not allowed to vote, at least not in this country. You see, the man who runs the Magnolia and Inwood theaters, which are part of the Landmark Theatre chain of art houses, is Australian, and though he's eligible to be a U.S citizen, he simply hasn't filled out the necessary paperwork. "And I like to say there's a little Charlie Chaplin in me," he says, not referring to the filmmaker's penchant for young girls. "Being an Australian is such a large part of my identity I just couldn't give it up."

So it's been with an outsider's bemused perspective that Hutcheson has seen myriad movies with political themes parading in and out of his theaters all year. His favorite? Well, probably Michael Moore's Fahrenheit 9/11--but that opinion doesn't count, since it made the Magnolia a small fortune this summer and since it was the only one of many Hutcheson actually saw. "And like I said, it doesn't matter since I can't vote."

But it has been the Year of the Political Movie, a cinematic season of celluloid campaigning by the likes of Michael Moore, Robert Greenwald, George Butler, John Sayles and other filmmakers raking in moviegoers' spare change by calling for a regime change. Control Room, a vivid peek at the lives (and deaths) of journalists working for the Al-Jazeera network, came early and stayed longer than anyone imagined; documentarian Jehane Noujaim's movie debuted in late May and had pocketed some $2.5 million by late September, when it was still on some screens around the country. Released by Magnolia Pictures, the big sister of the Magnolia Theatre, Control Room proved not even negative reviews from Donald Rumsfeld could keep people out of the theater.

But the proselytizing began in earnest in June, when Moore's Fahrenheit 9/11 stormed the cineplex after months of controversy surrounding just who would release it (Disney, which paid for it, or Miramax, which commissioned it) and who would see it (the fence-sitters or the True Believers) and how much impact it would have on the election (we shall see). It opened June 23 and made some $70,000 its opening week at the Magnolia, where $20,000 is considered stellar box office for a first-week gross. Nearly every screening was sold out for weeks, and early on theater employees witnessed a rare sight--audiences standing and applauding at movie's end. So much for reaching the undecided voter. "That doesn't happen at all," Hutcheson says.

Then, in short succession, marching into theaters were Harry Thomason's The Hunting of the President, which documented the right wing's attempts to oust Thomason's best buddy Bill Clinton; Robert Greenwald's Outfoxed: Rupert Murdoch's War on Journalism, which laid out the case that the Fox News Channel is staffed by Republican talking heads pushing the Bush administration's talking points; George Butler's Going Upriver: The Long War of John Kerry, in which the Pumping Iron maker told of Kerry's Vietnam War service and his decision to protest the war upon his return; and Greenwald's Uncovered: The Truth About Iraq, in which former government officials unravel the president's case for invading and occupying that country.

But the agenda pushing wasn't limited to the documentary. Though Jonathan Demme insisted his remake of The Manchurian Candidate was apolitical, its villains supported legislation that sounded like the Patriot Act and worked for companies that looked a lot like Halliburton. And John Sayles' Silver City starred Chris Cooper as a Colorado gubernatorial candidate whose failure to speak in complete and coherent sentences made him look like an indie-film version of Will Ferrell's Saturday Night Live Dubya double.

"The simple reason so many of these films came out this year is because this war had divided so many people, and most of these movies go after the person responsible for it, Bush," Hutcheson says. "And when you have a film that goes after Bush overtly, like Fahrenheit 9/11, the movie becomes their rallying cry, and they circle up the troops. What I find interesting is there have been a lot of films that have come out that are pro-Democrat--or, actually, anti-Bush or anti-Republican--so where are the films that come from the other side and give us a balanced viewpoint?"

There have been a few of those as well: In September, Dallas was host to the first conservative film festival ever held in the country, where such movies as George W. Bush: Faith in the White House, Michael Moore Hates America and Confronting Iraq were screened. And In the Face of Evil: Reagan's War in Word and Deed opened here two weeks ago, trying to make the case that the Gipper was a commander in chief elected by a much higher power than the people.

But only Fahrenheit 9/11, which pocketed more than $100 million on its way to video-store shelves last week, could be considered a success among all these releases--and even then, its rep as the Magnolia's highest-grossing film in the theater's short history was eclipsed by the surprise success of geek comedy Napoleon Dynamite. Most of these movies ran in the Magnolia and other art houses only a few weeks; Silver City and Going Upriver were gone within 14 days of opening. If viewers were undecided about whom to vote for, they made up their minds about one thing: Enough's enough.

"These movies aren't going to bring in the undecided voter," Hutcheson says. "They're for people who want their viewpoints reinforced. I mean, Going Upriver to me is like the Democratic National Convention being shown in our theater. Ultimately, what makes a good film is a good story. You go back to Fahrenheit, and it's a good story. These other ones aren't entertaining people. But every single year we play big films and small films, and the political film has the flavor of this year. Next year it might be Italian films. But let me say this: People should get out and vote regardless of who they're voting for. You know, in my country if you don't vote, you get fined. To live in a democracy you have a responsibility, even if you don't see the movies. " --Robert Wilonsky