OK, we promised a few months ago we'd address this, and now it's time. Anywhere you go these days, you see young straight girls getting their drink on, then grinding each other on the dance floor. On its surface, this seems like a fantastic thing. OK, it is a fantastic thing. It's the good by-product of our society becoming Porn Nation, U.S.A. Casual and accepted bisexuality among women who leave the bar with men. The only problem is, it may be too widespread. One example: When we were at The Green Elephant earlier this year, we saw a dozen or more SMU girls doing this to each other. Turns out they were all straight, and all said they like to put on a show for the guys. But be careful, ladies. If you do it too much, it loses its danger, its sense of daring, its coolness. Of course, it's still hot. Don't get us wrong.

Most Mondays are a useless blur of team meetings and breakout meetings, with the occasional impromptu meeting to break up the monotony. No one gets any work done. So why not sit there with a churning stomach, a pounding head and the nauseating stench of stale smoke? Besides, you have other things to worry about, such as the name of the person you left asleep back at your apartment or the location of your car. "Naked Sunday" at Nikita forces the dying hours of the weekend to cling for a few more breaths. At 10 p.m. they dim the lights and crank the volume. Crowds pour in, vodka sloshes, soft-core porn appears on two flat-screen monitors and, for a moment, Saturday night returns. Patrons know that Monday lurks at 2 a.m., so they beat it back with the only weapon they have: massive doses of alcohol. Do Naked Sunday right and you won't think about the workweek until after you figure out where you are when the alarm rings Monday morning.

Late, late, late, 11 p.m. or later, load up your friends, your family if you have one, definitely the kids, and take them all to Ciro's on Midway Road just south of Belt Line. You'll join large gatherings of Middle Eastern families, many with kids, who have come to enjoy wonderfully fresh hummus, baba ghanouj, chickpea and olive mezze and falafel sauce, live music and some of the best belly dancing this side of Cairo. Between performances by professional dancers, many families get up and dance with each other. It's easy: Lift both arms over your head, snap your fingers and make big circles with your navel. Who knows? Someone may show up the next day at your parents' house and ask for your hand in marriage. Worth a try. 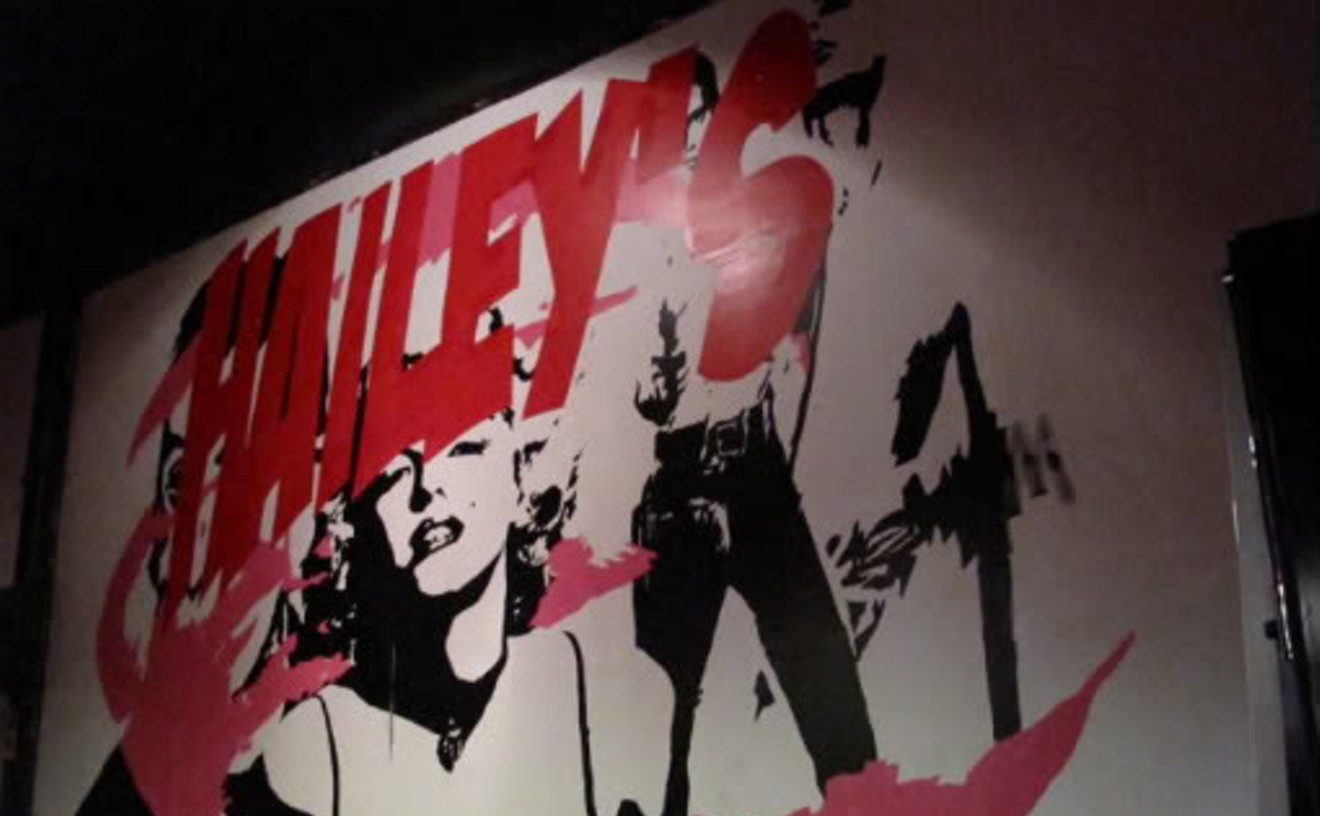 Yes, the drive from Dallas is tedious. And getting back to town can be flat-out perilous. But for music geeks, Hailey's in Denton has the best booking in town, hands down. Last year's shows included such buzz acts as The Wrens, Liars, TV on the Radio, Pretty Girls Make Graves, Iron and Wine, Mates of State, The Unicorns, The Walkmen and Bonnie Prince Billy. The list goes on and on. Not only is Hailey's sound and lighting excellent, but the club is freaking comfortable. We know, we know: That's so not rock. Whatever, dude. Some of us actually believe live music shouldn't come with bruises and spilled beer. Speaking of beer, however, Hailey's has 52 kinds on tap. And if the music's crummy, which it usually isn't, there are two pool tables in back that don't even interfere with the band. That way, everybody can do their own thing--sit back or rock out, play snooker or get snookered--without ruining the show for anyone else. Brilliant, isn't it?

Republic is a gay bar

For a rumor to really catch on, it must contain elements that the public finds plausible. That's why "George W. served his country" works--most people understand that by reneging on his National Guard agreement, he saved thousands of American lives, both in Vietnam and at training sites around the United States. Geez, imagine him in the cockpit of a fighter, a place of actual responsibility. So when dismissed staff members (so the story goes) started a rumor that Republic had become a gay bar, people believed it because: 1. It attracts a "diverse" crowd (you know what we mean), and 2. it's difficult to tell the difference between gay male and Uptown male, anyway. Same hair, same costume, same facials. Oddly enough, the rumor worked in reverse, as hordes of stunning females descended on Republic in the wake of the "gay bar" tale. After all, women feel comfortable among the alternative set.

Best Place for a Walk in August

On the shore of White Rock Lake, the Dallas Arboretum is one of those city treasures that many residents still don't know about. Those who do often visit the arboretum only around Easter when the azaleas--with 2,400 varieties--are in glorious bloom, or in the fall for the magnificent mums. But on those days when the thermometer hits 95 degrees, take a picnic and head for the Palmer Fern Dell in the Jonsson Color Garden. The misters that keep the moisture-loving ferns and pond plants thriving also make the temperature plummet more than 20 degrees. Or maybe it just feels like it. Open to the public from 10 a.m. to 5 p.m. seven days a week (except Thanksgiving, Christmas Day and New Year's Day). Adults $7, seniors $6, children 3 to 12 $4. Parking $4.

The Art of Exotic Dancing for Everyday Women

OK, so honestly, if you attend an Art of Exotic Dancing workshop, taught by the spunky Clarissa Pierro, you are one of the fully clothed exotic dancers. Oh, and you're a woman. Pierro teaches the workshops at various gyms and studios around Dallas, and for a mere $79, women can unleash their sensuality and learn to feel good in their own bodies--no matter what shape or size. The environment is completely supportive (even if the idea is a little intimidating at first) as students learn seductive walking, hip rolls and some floor work to impress their partners or just learn for the hell of it. The experience is invigorating and fun...and better for the self-esteem than any support group we know of. 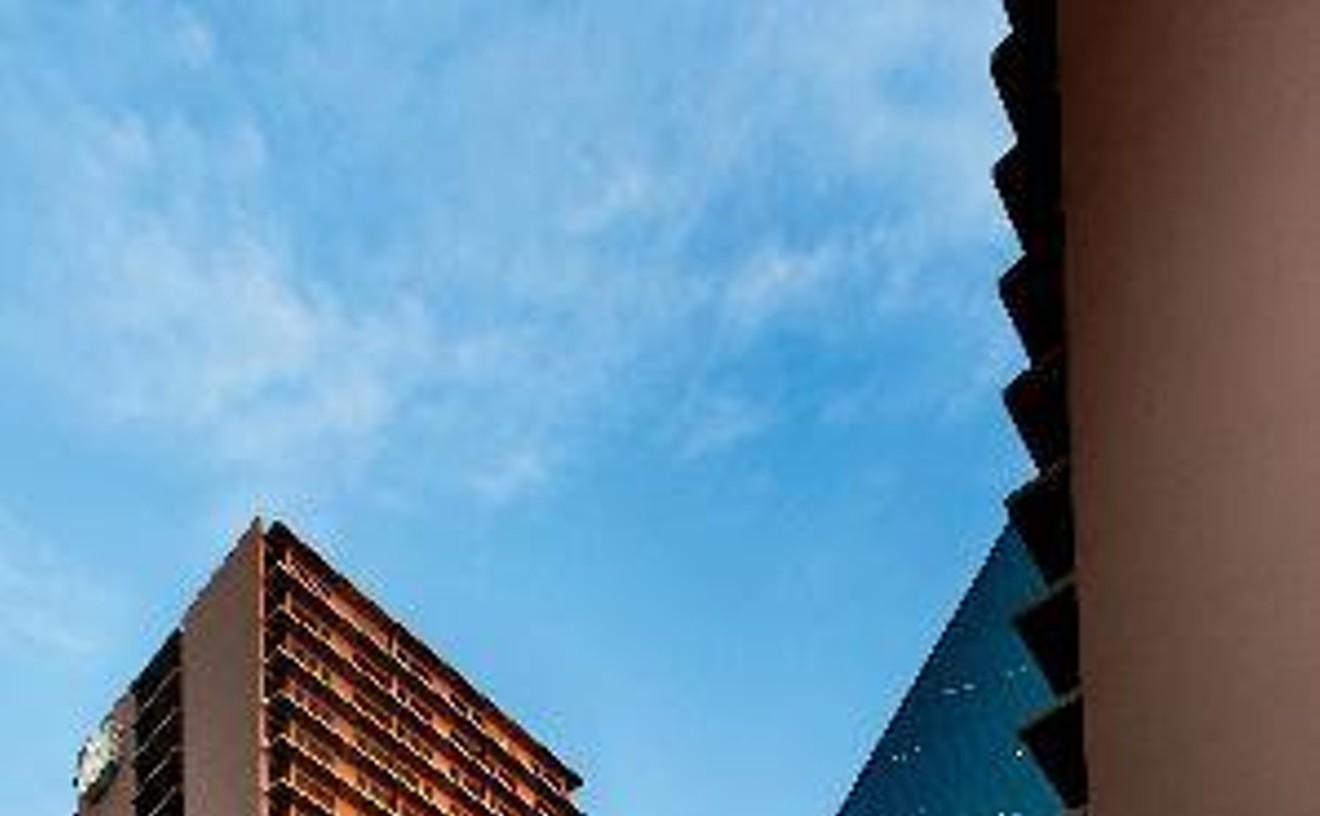 Here's the best wedding advice you'll ever get: Spend your wedding night in Dallas. Regardless of the fabulous honeymoon you have planned, stay here for your wedding night. After a long hard day of getting married, the last thing you need is to rush around, change clothes, pack or repack, rush to the airport, cram yourselves into cramped seats, try to sleep, etc. It's much nicer to enjoy your reception, dance more, drink more and spend more time in your lovely outfits with your lovely friends and family. Then, have the limo driver drop you downtown at the Fairmont, where you'll make such a smashing entrance, even strangers will applaud. Seriously. The Fairmont's a beautiful, traditional hotel with consistently excellent service. Every guest room has a perfect city skyline view, is very comfortably furnished and soundproof. The Fairmont offers a "Romance Package" where you can choose a deluxe room ($249) or a suite ($299) and get champagne and chocolates in your room and a continental breakfast in bed.

Want to exercise while wearing a large straw hat? Like to watch the sun set while working out? You don't have to attend Harvard to crew. Check out the new recreational rowing club, White Rock Boathouse Inc., which has restored the 1930s boathouse and provides rowing shells--three singles, one double and a racing shell--for the use of members. "Most people don't know how to scull, so we give lessons," says Ginger Twichell. She and club member Sam Leake charge $50 for private lessons, $75 for lessons for two. The shells have sliding seats, so the rowing motion gives an all-body workout. "It's very rhythmic," Twichell says. "You can get in a Zen-like state. It's very quiet out there, and you see the lake from a whole different angle." Membership is $300 per year, which gives you access to the boats and expertise of the members; go to www.whiterockboathouse.com to download an application. "You just reserve a boat, show up and take off," Twichell says.

The rumor's been that the reason Hailey's is the swankest, nicest, classiest rock-and-roll club north of the Gypsy Tea Room is that it was never supposed to be a haven for indie rockers. Instead, it was designed for jazz and blues artists, and the disposable income-ready fans attracted by that "more adult" music. But the youth market was more profitable, so a switch was made, and the hipsters paying the cover got to benefit from the fancy digs. It's a great story. But it's just not true. Owner Eric Hill wanted a club like no other, meaning no barn wood and neon signs, but rock was always part of the equation, along with the blues and jazz (the University of North Texas' award-winning jazz school is minutes away). There's a little jazz sprinkled in on occasion, but the calendar's usually booked with buzzworthy rock bands, dance nights and even Hipsters Balls because, despite the smoove façade, Hailey's has always been ready to rock.