"No lard, no MSG, no freezer"--that's what Baja Fresh advertises above the order counter. They go further than that, with a good selection of low-carb and low-fat menu items that taste like they're full of the stuff. Don't hold it against them that they're owned by Wendy's; Consumer Reports recently cited Baja Fresh for turning out some of the tastiest, relatively healthful fast food. On the low-fat, lower-calorie side, we like the enchiladas verano, two charbroiled chicken enchiladas with grilled peppers and onions in a tangy verde sauce. They come with pinto or black beans, pico de gallo and rice. Another good choice is the "Bare Burrito"--a bowl of flavorful chicken, grilled peppers, onions, rice, pinto beans, pico de gallo and salsa verde. Don't miss the terrific freshly made salsas, especially the mild, totally addictive Salsa Baja. Baja Fresh has a few Dallas-area locations, but the one on Knox Street is the only one centrally located.

Best Restaurant With Hardly a Carb in Sight 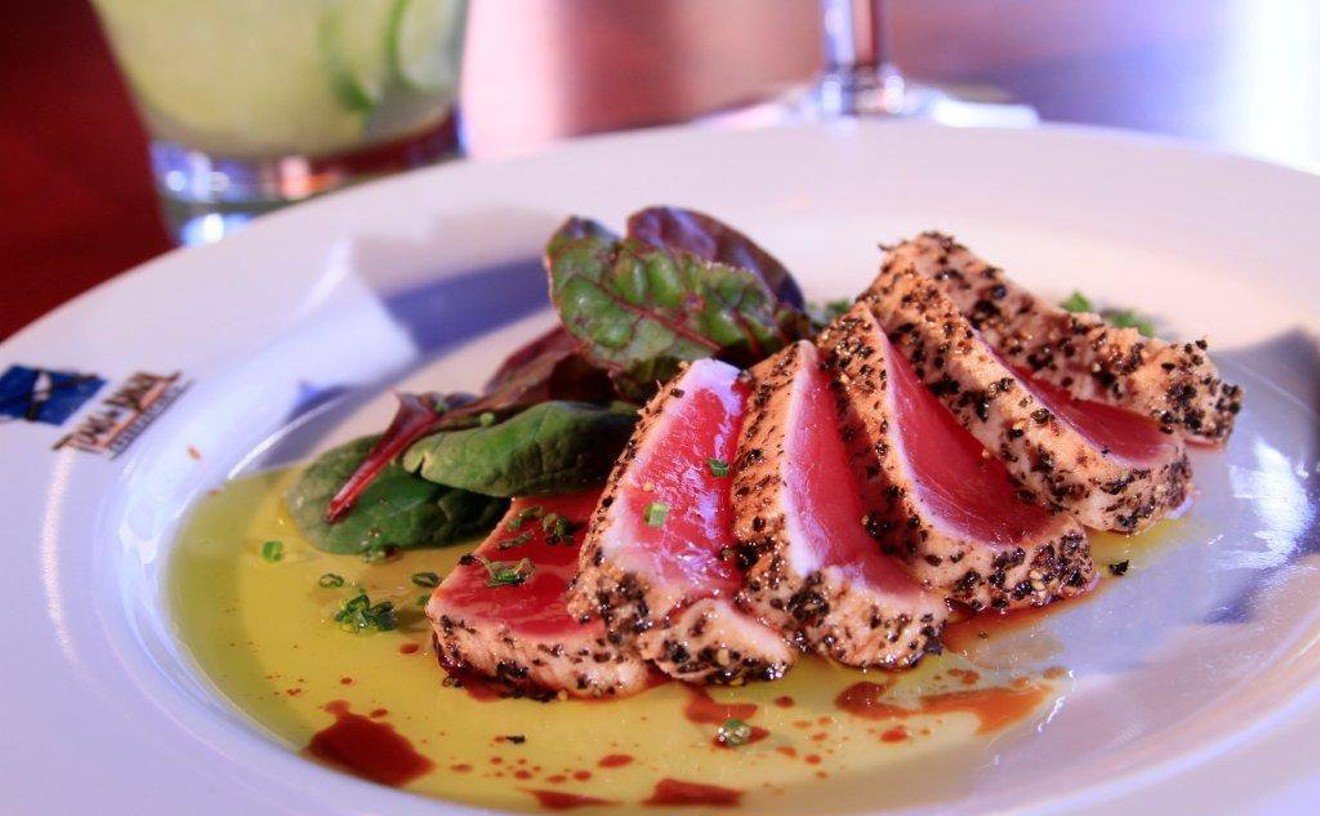 Never mind that there seemed to be a preponderance of overweight middle-aged men on our recent visit. Texas de Brazil, with restaurants in Dallas, Addison and Fort Worth, is a carb-counter's paradise. You probably know the churrascaria concept: Guys in baggy pants (and a few ladies) tote around skewers of roasted meat and carve you a hot slice of whatever you want--various cuts of beef, lamb, pork and chicken. There's also a lavish salad bar, with roasted peppers, blanched asparagus, smoked salmon, bacon chunks, imported cheeses, lobster bisque and lots and lots of other stuff. OK, so there's a little rice tucked away somewhere in the salad bar, and the "cheese bread" served with each meal is fairly irresistible--that's about it. You're barely exposed to temptation. Just meat and veggies, meat and veggies all the time. And that meat: melt-in-your-mouth leg of lamb, tender filet mignon, savory picanha--the house specialty, sirloin chunks roasted in a coating of rock salt--and at least a half-dozen other offerings that we saw making the rounds. You might avoid carbs altogether, but you'll still end up ingesting about 2,000 calories. 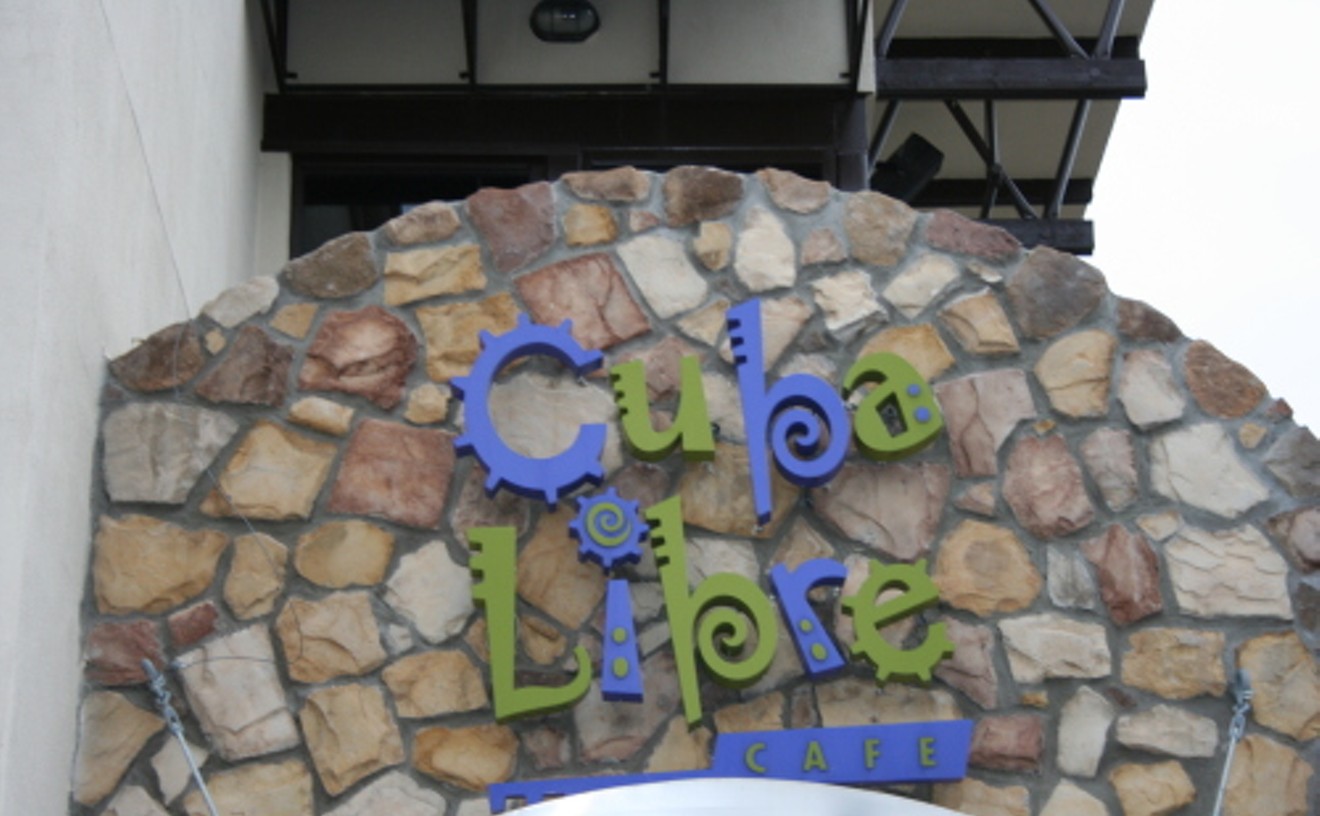 Everything at Cuba Libre goes down easy, from the (pretty 'spensive) pitcher of mojitos to the elegant desserts to the eye candy that fills this Knox-Henderson joint late at night. But, to paraphrase an old Nate Newton commercial, when we are hawngry, which is most of the time, we like to pig out on this dish. A huge salad with dollops of blue cheese and covered with the most succulent chicken tenders you've ever sucked down your gullet, Cuba Libre's TC-CCS is one of our guilty-pleasure (read: post-hangover) meals. Warning: A 20-minute nap is required after eating. 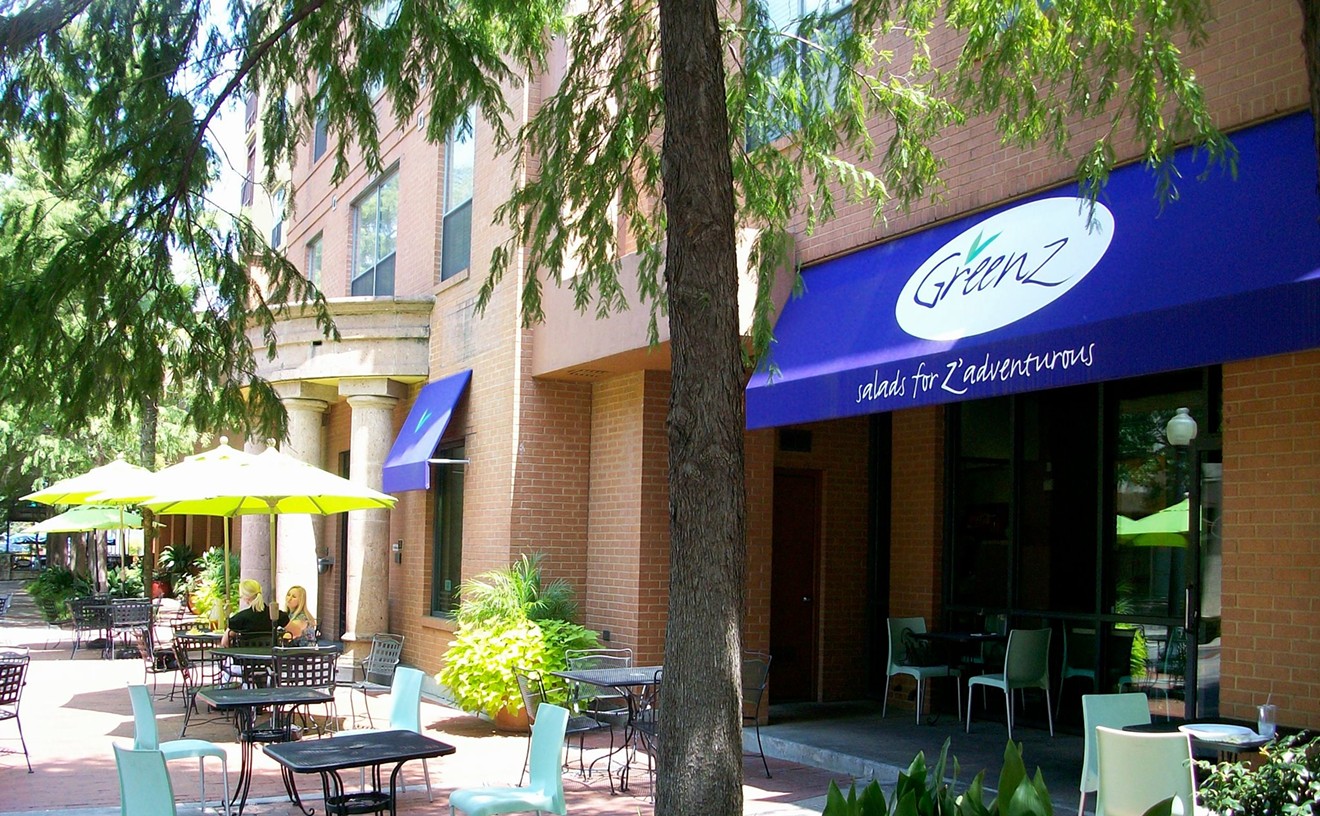 Soup is a tough call. There are winter stews, summer gazpachos, even autumnal bisques. Chicken noodle is good year-round, but that's too easy. We want a soup that's tasty but not too rich. One that's smooth and substantial. Greenz, the Uptown eatery that specializes in salads, impressed us with something else green. Their creamy asparagus soup is velvety and luscious. Each spoonful slides down the throat, leaving a fresh taste on the palate and an instant craving for the next. Gouda sprinkled on top adds texture without getting too clumpy or distracting from the asparagus' bite. Greenz offers two sizes--the cup is a perfect amount to accompany any of the salads; the bowl is a filling option all on its own. This concoction combines two favorites: soup and asparagus. And all without the notorious asparagus effect.

Give us fried potato in any form and generally, we're happy. We praise the inventors of the tater tot, french fry and hash brown. And we felt really bad for our arteries when we discovered a new addiction: Jerk Frittes from Cuba Libre. The thin little gems are crispy, golden and seasoned perfectly with an herb blend that is undoubtedly the product of training in the culinary arts, i.e., making people drool. The damn things are even good soggy and straight from the doggie bag. The real key to these taters, though, is their partner in crime, the bacon-avocado ranch sauce that offers a cooling touch to their herby crunch. The restaurant's sandwiches come with the frittes, but if a sandwich isn't calling your name, check out a side of the perfect potatoes with a taco platter or even as an appetizer. They'll definitely change the way you look at the common drive-thru fry. 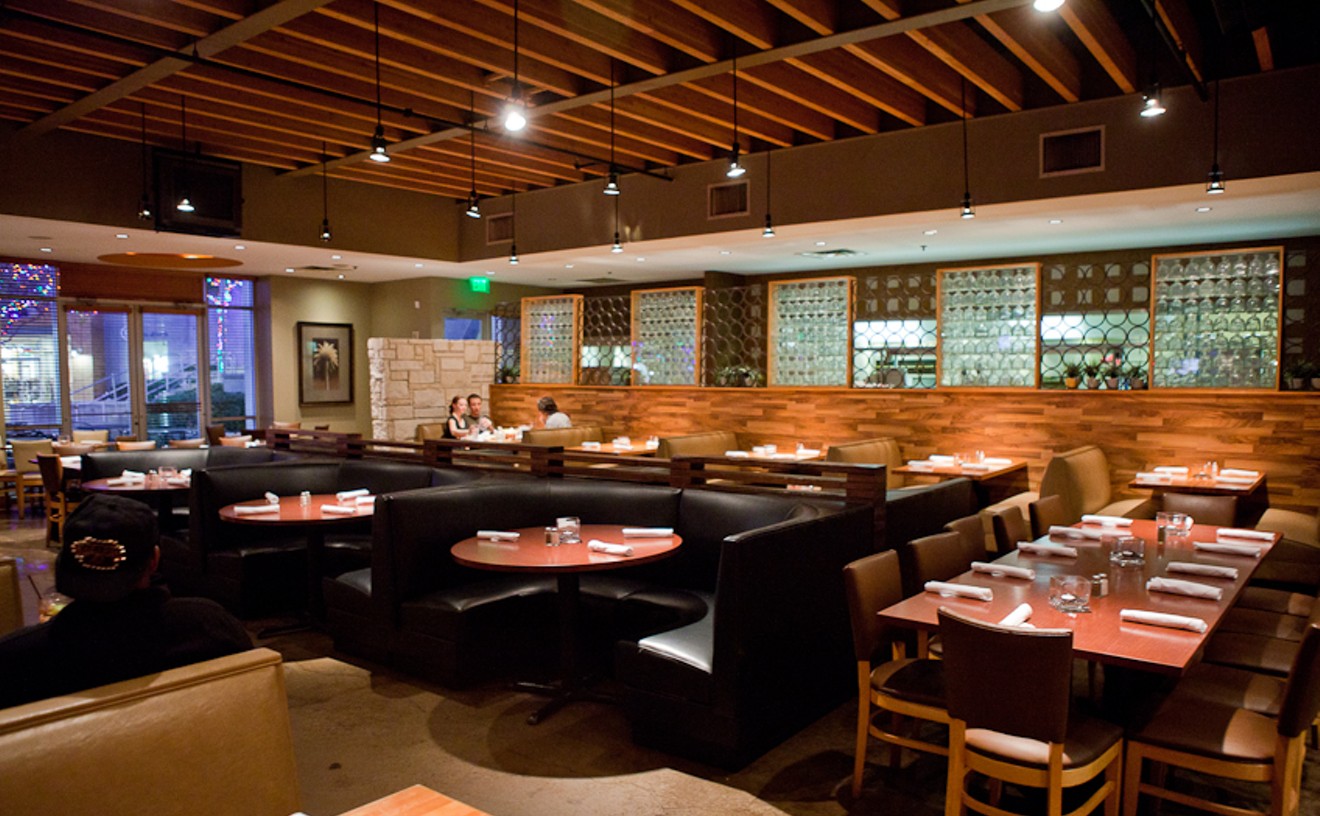 In the Tex-Mex state, salsa has a lot to prove. Heat (as in spice) must make itself known but not so strongly that a full glass of water is needed after each bite. For us, the tip-off to a perfect salsa is a reaction after the initial taste of wanting to pour it on everything we order. But we weren't even thinking about salsa when we dipped that first chip at Margarita Ranch. That changed instantly as we tasted the warm, smoky near-puree. We wanted to drink the entire bowl. We would've rolled in it, it was so good. Forget whatever entrée we ordered, because it ended up drenched in the mix of peppers, fine bits of tomato and garlic. It's sweet and sultry lava that eases down the throat.

If there is a single dish that represents the idea of comfort food, it's shepherd's pie. It's warm, meaty and soft, and there's no worry of combining bites or elements since that's already been done for you. We've been known to tuck into some welcoming shepherd's pie, and in our experience, the Tipp's is the best. The ground meat is slightly peppery, the peas aren't watery and the mashed potatoes make for the perfect cloud topped with a crust of cheddar cheese. It has to be the best, actually, because no matter how full we get, the dish turns on the "glutton" switch in our head and we keep trying to finish...until the waitress is kind enough to take it away before we explode.

Ziziki's, the Travis Walk restaurant owned by Costa and Mary Arabatzis, has just celebrated its 10th anniversary, and with its record of outstanding quality, we expect another 10, at least. Ziziki's has won this award before--no great suspense here--and after trying the range of Greek restaurants in the area, we see no reason to dethrone it now. Though it would be more accurately described as Greek-inspired, Ziziki's uses top-notch ingredients and adds a dash of invention to Mediterranean favorites. We like it for the French feta cheese, the best we've ever tasted; the tender lamb souvlaki; the excellent children's menu; and, most of all, a sublime Australian rack of lamb.

The perfect sweet treat is indulgent, both cakey and gooey, and self-contained: the cupcake. Why people bother with slicing up a big hulking cake is a mystery, especially when the Cupcake Kitchen and their enorma-cups are just a phone call away. A one-dozen minimum is required for delivery, but there are no limitations to the complete satisfaction one achieves with a bite of, say, the Triple Chocolate Threat or the You Got Chocolate in My Peanut Butter! For the fruity, there's the Mellow Yellow or The Creamsicle. And there are still more to taste. The cupcakes come in regular (large) size or Li'l Cakes, and each dozen can be made up of three varieties. Of course, you could bake your own damn cupcakes, but after partaking of Cupcake Kitchen's moist cake, rich-but-not-too-rich icing and delectable flavor, who needs to? Currently Cupcake Kitchen is open only for weekend delivery service. 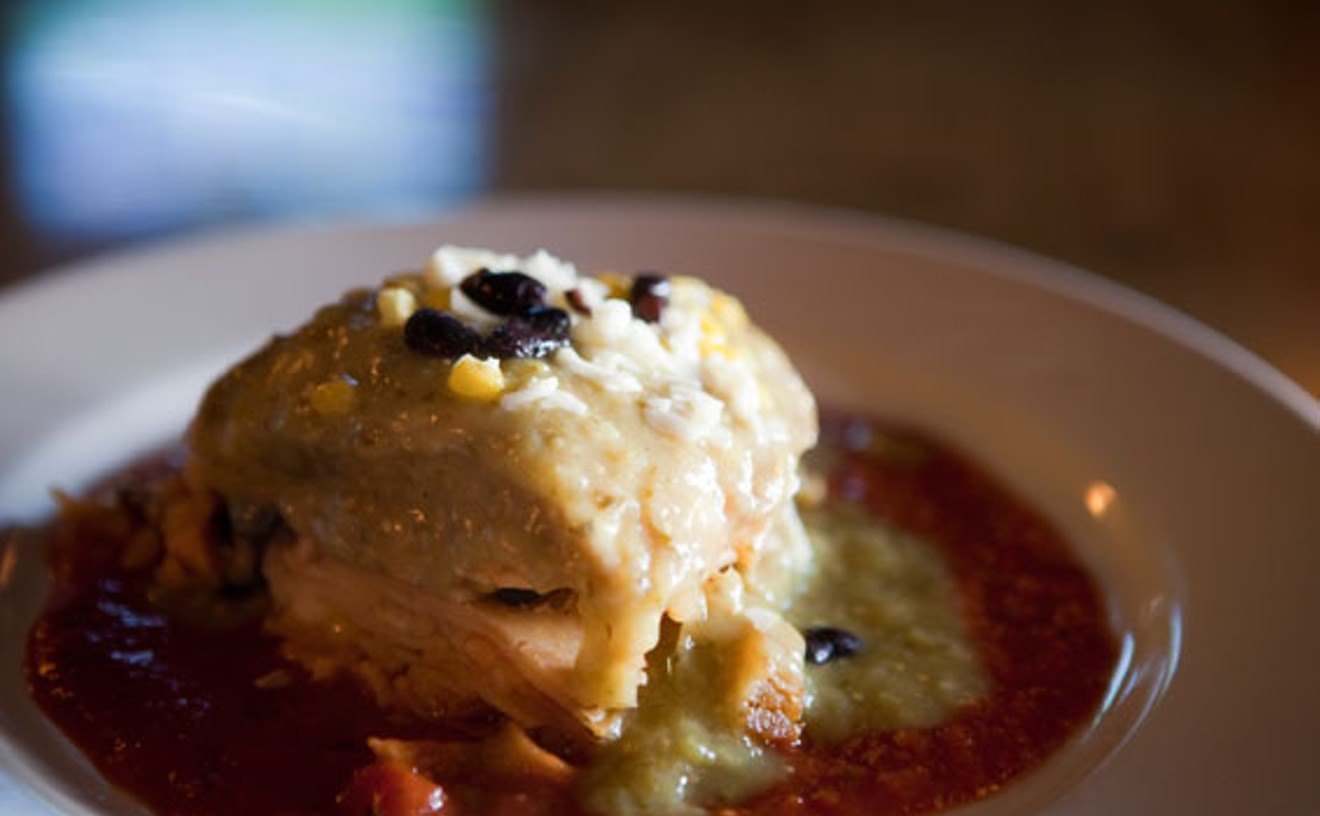 At the risk of never getting a table again, we'll impart our knowledge of a supreme lunch special. Monica Greene and her gang offer one of the most affordable lunches in town without skimping on flavor or quality ingredients. For a teensy $4.99, lunch patrons can have their pick of various enchiladas, Cha-Cha burritos, quesadillas, cheeseburger, Mexican lasagna (filling and flavorful) or, our favorite, Greene Pasta made with spinach jalapeo pasta. The portions aren't measly or humongous--just right for midday when there's still office work waiting. Monica's provides chips and salsa as well, so there's no leaving hungry. Even with a beverage and tip, the tab is still under 10 bucks.