You know the organ part of Watel's; the menu swath that offers calf's liver, sweetbreads, calf brains and veal kidney. But you probably didn't know that Watel's has a room with a view, too. Tucked in back of this quaint Allen Street cottage is the sunroom, which offers the opportunity to munch on juvenile bovine brains while taking in the brain-teasing Dallas skyline. The room, with a brick sunken floor, overlooks a green space that serves as a refuge for power substation cables with the Dallas skyline peeking through as a backdrop. It's endearing, this rustic urbanity that crackles beneath the grass, sparkles in the distance and broods on the plate. Unless you get the kidneys.

In many ways, the menu at 62 Main is child's play. Example: In the center of the menu is Ryan's warm pecan and rosemary-crusted goat cheese salad. It's a delicious mix of crisp greens drizzled in tomato coriander dressing. The cheese is thoroughly embedded with pecan and herb debris, which contrasts well with the subtle cheese sharpness. Instead of gooey, the cheese is flaky, almost like fine pastry. Ryan, son of 62 Main's chef/owner David McMillan, invented this. Ryan was 5 at the time of this creation. Ryan is different. Instead of video games and micro-racers, Ryan plays with cinnamon, flour and baking powder. Instead of cartoons, Ryan incessantly watches the Food Network. Emeril is his SpongeBob. Salad is his GameBoy.
Fresh, fast and flavorful: salads at Greenz are towering creations that put other greenery concoctions to shame. Spicy Panko Shrimp Salad bests the other menu items by virtue of its height and spice. Skewers with four huge shrimp--panko-breaded and then fried--anchor a mountain of greens mixed with daikon and edamame sprouts, sprinkled with carrots and wasabi peas and dressed with spicy lemongrass vinaigrette, served in a giant clam shell made of fried wonton. Other choices, including Hawaiian Tuna, BBQ Texas Slaw, Grilled Chicken Riviera (with sliced chicken, greens and fresh fruit), "Bar None" (grilled flank steak, lettuce and nuts inside Greenz's "signature" pretzel bowl), Chipotle Chicken and The Wedge, mean a different salad for each day of the week.

The women at SMU are thin. We're talking Mary Kate Olsen thin. And since the best bakery in town is only a few blocks away in Snider Plaza, we have no idea why. Dough Monkey is a quiet little shop where the offerings are much better than anybody could ever expect. That probably means that the fat and calorie contents are things that we just want to pretend don't exist. Nonetheless, Dough Monkey rocks. The macaroons are tasty piles of coconut and sweet cake, the chocolate chip cookies are better than anything our grandmothers made, and the chocolate cake is so amazing that you'll probably want to buy the largest size even if you'll be the only one eating it. And the prices aren't that bad either. If you're throwing a party or trying to pack on the pounds (SMU chicks, this is where you pay attention) then Dough Monkey is so the place for you.

We admit, we found out about this place in the "Sentence Restaurant Guide," a highly critical survey of local restaurants by a Dallas author we'd never heard of, one Ralph Robert Moore, who posts a moody, authorly pic of himself on his Web site (www.ralphrobertmoore.com/dallasrestaurants.html) as well as personal essays and diary entries that fall in the category of Too Much Information. We have to agree, however, with everything the straight-shooting Mr. Moore says about Sam's Pizza and Pasta, an unprepossessing place in a Duncanville strip mall: "Sam's pizzas are superior to those obtained elsewhere in the Dallas area, the emphasis placed on the flavor of the dough, and the freshness of the toppings." We can add that this is the best we've tasted in Texas, where pizza seems to suffer from a lack of family eateries with the old-world ethos and ethnic connections. Nothing fancy about the range of toppings here; just the usual suspects (except our prized green olives). Straight out of the oven, Sam's pizzas are stunning. Try it for yourself and you'll wonder why more people don't make the short jaunt down to Duncanville for a great traditional pizza. (But please, Sam, would you do something about those scary restrooms?)

This rack is bright green, and this is a good thing. The green, as frilly as a shamrock boa, is a bright herb encrustation unmolested by intense heat. The lamb chops themselves are gorgeously ruddy, creating a kind of Christmas holiday wreath in meat. The bones are propped vertically, leaning into a crown pinnacle around a central core of portobello mushroom risotto sown with garlic sautéed spinach. This is tall food that doesn't annoy. The flesh is slightly loose, saturated in juices and silken with streaks of raciness--not the kind that elicits winces, but the kind that rounds flavors as they hint at tension. Pooled around this crown of lamb bones is a demi-glace--a restrained one that serves as more of a gauzy moisture curtain than a heavy viscous blanket. Rack 'em up. 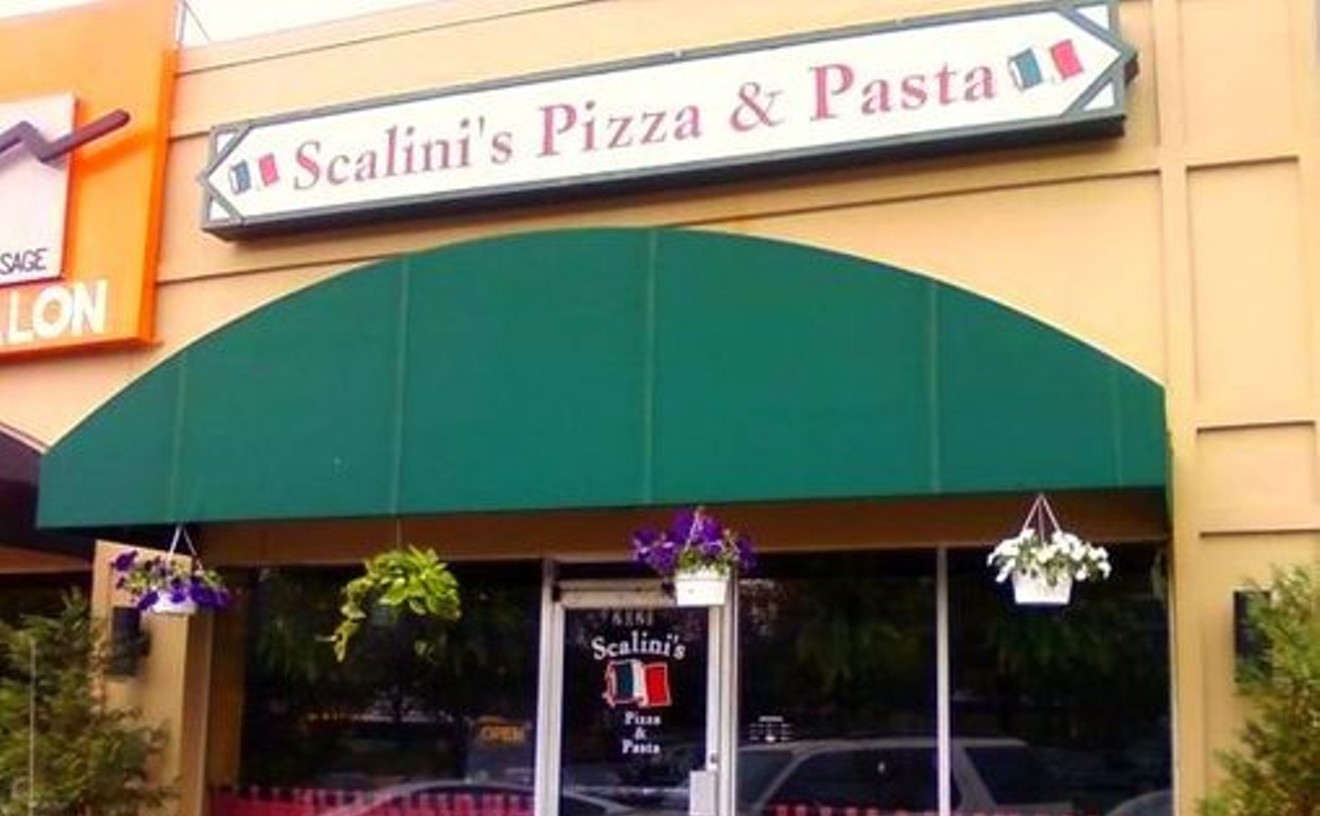 Lots of Americans are suspicious of thin-crust pizza. It's hardwired into our brains to want the most stuff for the least amount of money, and nobody but nobody is gonna skimp on my pizza dough. But for those of us willing to transcend our capitalist heritage, a good thin-crust pizza is manna from heaven. Cooked just right, crispy but not brittle, a thin crust is the perfect cheese-and-meat delivery vehicle, and Scalini's is the Cadillac of thin crusts. The toppings are fresh and the service is friendly, too. To those thugs and killers who would force us to eat thin crusts, we enthusiastically say: "Bring it on!" 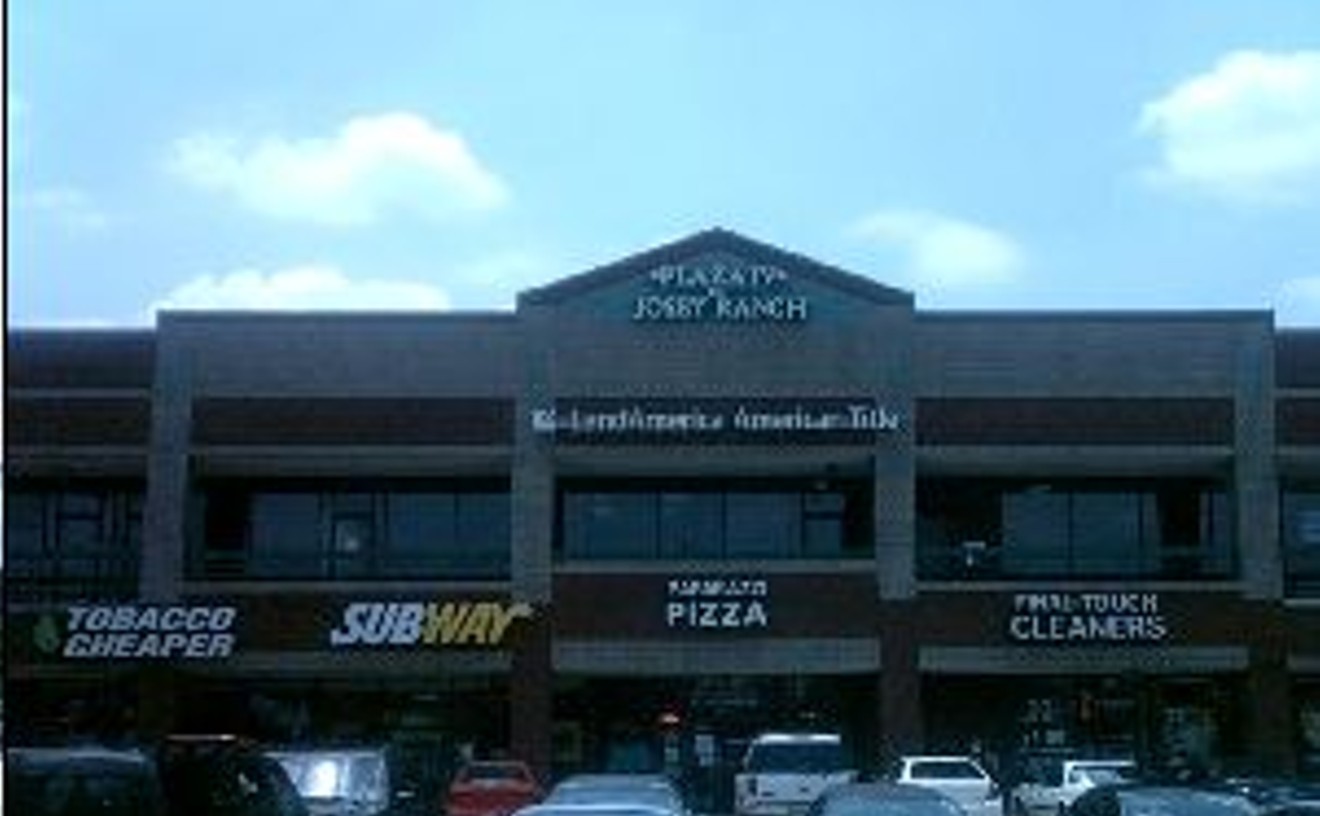 There are a few magic words when it comes to pizza: "delivery," "wood-burning oven," "stuffed crust," "extra pepperoni." The new spot at Josey Lane and Keller Springs Road forces you to pick up the damn pie. We don't see a big open flame anywhere behind the counter. Guess you can order extra pepperoni, though. And pay with a credit card--the other magic words. Paparazzi Pizza serves the usual "works" and "supreme" pies heaped with meat, olives, tomato sauce, etc. But they also bake six different olive oil-based pizzas. These are unique and flavorful. No red sauce, just a nice crust and a dollop of olive oil supporting such ingredients as roasted eggplant, kalamata olives, capers, tarragon, pine nuts and whole roasted garlic. The eggplant version sits on an amazing black pepper crust. A pie called "tomato tango" features both sweet sun-dried and herbal seasoned veget...fruits. Whatever. There's other stuff, too, including babaganoush, kabobs and gyros. Think the owners must be furriners or something. After all, no Texan thinks of the Mediterranean when they ponder the origins of pizza. 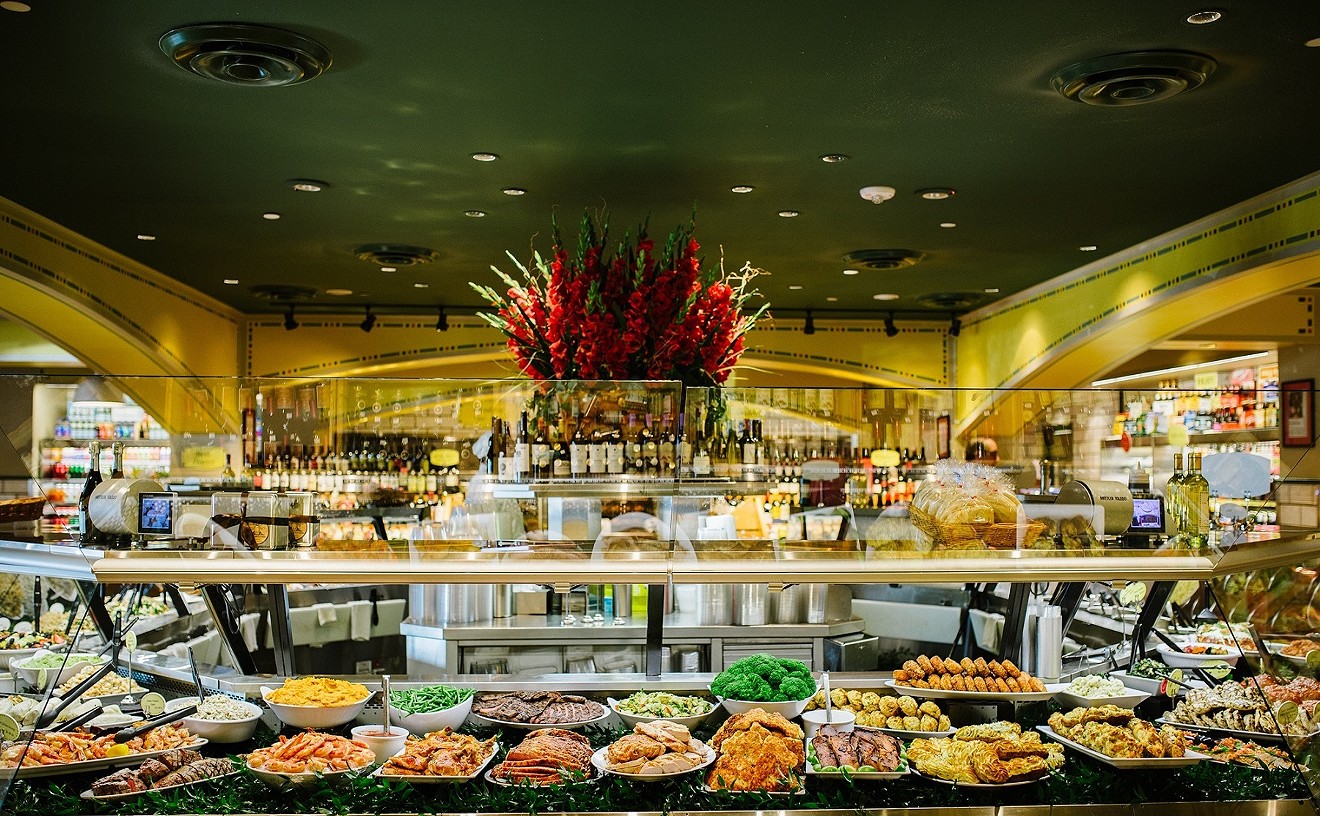 Brandon LaJoie
The fruit is fresh. The milk is cold. The sushi's delivered daily (we think). The breakfast burrito is great. The ribs come slathered in a sauce that's tangy without being showy. The salsa is showy--who knew peaches and raspberries went well with Mexican spices? The salad offers more toppings than could be included--either here or on the greens. On the sandwiches, honey mustard is the best spread. The soup, when they have it, is worth hoarding. The microwavable meals are far better than Kroger's. The eggs Benedict is the best way to start a Sunday. The wine, the best way to end a Saturday. The pasta is always perfect. The marinara sauce is underrated. The salmon tastes like it was caught five minutes ago. The triple-flavored cheesecake is the best. Ever. 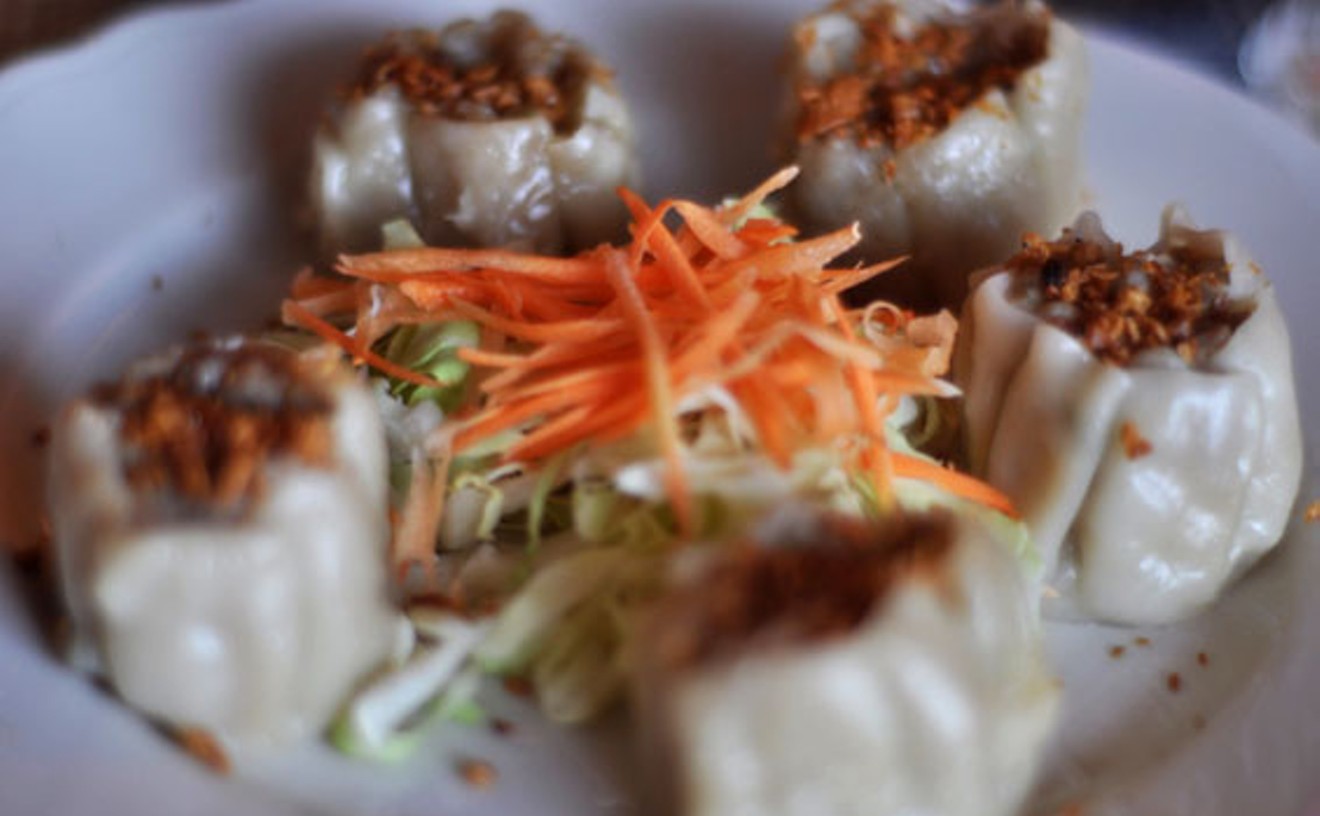 Taryn Walker
Ambience is in short supply at the Bangkok Inn. The garish red and green décor may be an attempt to distract patrons' attention from the uneven floor and matching ceiling, and often the best tables are taken by members of the owner's family reading the paper or doing homework. But don't worry, once your masaman curry arrives, that smell is all the ambience you need. We can't actually tell you what the rest of the menu is like (we hear it's pretty good, though), because we can't bring ourselves to order anything other than that Buddha-sent concoction of potatoes, beans, meat and spices. No wonder that guy rubbed his belly so much.

Like its cousin Café Madrid on Travis Street, Hola! serves Spanish tapas, small plates that pack big taste. Our favorites are the potato omelet and the corn-and-codfish croquettes, but the menu offers a plethora of other dishes as well, including a fabulous dessert of sautéed bread drizzled in toffee. Hola! is a dinner-only establishment, and that seems fitting. The place is small and dark and could be a great choice for date-night romantics. It may be just our active imagination, but if you squint a certain way and avoid the patio (it offers an excellent view of a generic intersection), the atmosphere feels almost European. Hey, Dallas is a long way from Spain, so we'll take what we can get.