The Store of Record

The beat goes on. Can Bill's Records and Tapes?

Attention, urban cowgirls. Are you looking for something to set you apart from all the other faux cowpokes at Dallas' current hottest hot spots? Well, if you're tired of seeing some skank gankin' your style, then check out Acid Cowgirl. These ladies take regular old cowboy hats and spruce 'em up real fancy. They have a variety of designs (all hand-painted) to choose from--including a skull-and-crossbones version we're quite fond of--or you can submit a design of your own. The only limitation is your imagination. Custom hats start at $150, but that's a small price to pay for individuality, don't you think? With a one-of-a-kind design to top your noggin, you'll be sure to stand heads above the crowd.

We don't know how CD Source gets so many used copies of hot albums and sells them for less than 10 bucks a pop. Maybe it has something to do with the manager who's always sitting at the front of the store, staring at customers like a Mafia kingpin. Then again, we aren't the kind to question a good thing. The used rock and rap selections at this Old Town institution are the best in town, but the store's jazz shelves hide some great gems, particularly the large number of remastered classics from Blue Note and Impulse. After you're done picking through the convenient--and gigantic--"new arrivals" section, you can't miss the wall stocked with a bajillion DVDs on the cheap. The service isn't too shabby, either, as employees will dive through the sea of used discs to find a cheaper copy of whatever album you're hunting for. That is, when they're not staring at you. And ladies, if you're wondering where all the music-loving guys hang out on Sunday afternoons--this is it.

Ashira Tosihwe and Emma Rodgers started Black Images in 1977 as a mail-order business after they had experienced frustration finding books with positive images of black people for their own kids. Since then, Black Images has blossomed into 2,600 square feet of books, cards and incense specializing in stories and images of the African diaspora. Author appearances and panel discussions at Black Images provide some of the best book fare in the city. Readings in the months ahead will include Francis Ray (Any Rich Man Will Do), Eric Pete (Don't Get it Twisted) and Niambi Jarvis and Lisa Bartley-Lacey (100 Words of Wisdom for Women).

The owners of this local, all-organic nursery chain call them "Redenta's 50," unique plants they grow themselves that are usually available only at their nurseries. Like teucrium cossinnii (creeping germander) and justicia spicigara (orange shrimp plant)--catnip to discriminating gardeners. In addition, Redenta's offers a great selection of herbs, native roses and perennials. The plants are always in good condition, unlike droopy flats often found at the big chains. A knowledgeable staff can advise on organic solutions to plant probs. In addition, they offer neat statuary, fountains, pots and objets d'art. During the spring and fall planting seasons, each Redenta's store hosts a gardeners' get-together at 10:30 a.m. Saturdays. Learn about the best plants to attract hummingbirds and butterflies or just shoot the breeze about mulch and manure.

Luxuriating on her Tiger Dreamz pet bed as you walk in the door of the feline-friendly shop is Maggie, regal store cat. The deed might say that Anne and Jay Horwitz are the owners of The Cat Connection, but as her bio on www.catster.com states, she is the co-owner. Ask them, and well, they won't exactly deny it. Her lush tabby mug is all over the store's Web site, www.thecatconnection.com, and even printed up on her very own Texas pet driver's license displayed behind the counter. Maggie greets customers and does a good job pushing the merchandise. One look at her gobbling Kitty Kaviar or Feline Greenies and who needs to question how good it tastes? It's a sure sale if you can see her live in actionor inaction, rather. The otherwise cool and casual polydactyl (a.k.a. a Hemingway cat, meaning she has extra toes--seven on her front paws and six on her back) is only sensitive about two things: people poking her paws and prodding her belly. Hey, it's all right, Mags, those stripes of yours are naturally slimming. 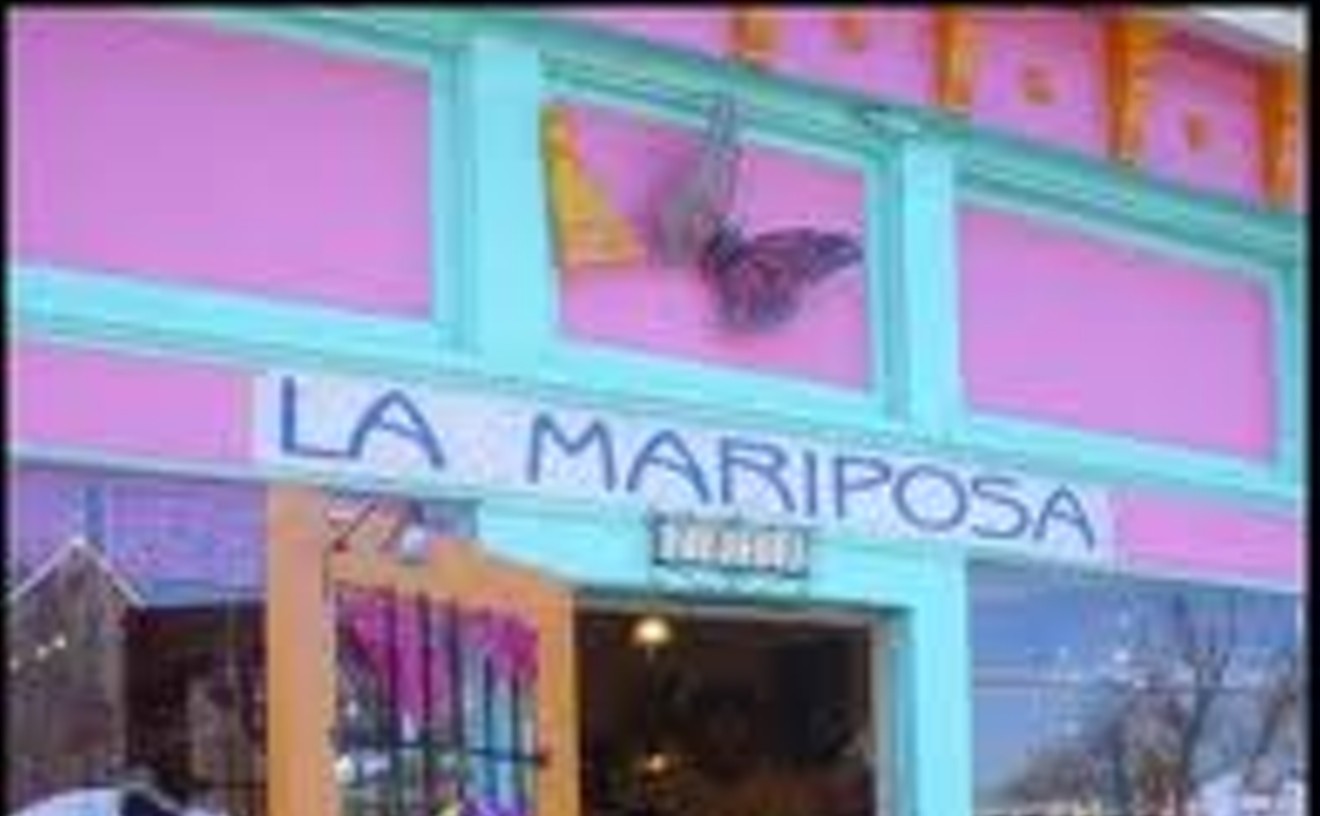 La Mariposa is Spanish for "butterfly," which is quite fitting for this Mexican imports store on Henderson Avenue. Butterflies are beautiful, delicate creatures admired for their vibrant colors and grace--much like La Mariposa. Upon entry into the shop, visitors are met with an array of bright colors. From the Talavera pottery to the Dia de los Muertos figurines, La Mariposa is filled with beautiful handcrafted items from our neighbors south of the border. There's clothing, jewelry, handbags, piñatas--and just when you think you've seen it all, you stumble upon another hidden gem that has your credit card number written all over it.

In the world of tattoos it seems like there are two kinds of shops. There's the low-calorie, squeaky-clean place that specializes in Tweety Bird tattoos and belly-button piercing, and then there's the kind where if you're not well on your way to full yakuza regalia and your tongue is still in one piece, you're clearly not cool enough to breathe the same air. Holdfast Tattoo on Greenville is that rare breed that inhabits the middle ground. These guys are old school, don't get us wrong. There's no shortage of full-sleeve tattoos in here, just without the accompanying chip on the shoulder--or as manager and artist Jeff Brown puts it, "We're trying to abolish cool." An admirable effort, but doomed to failure as long as walls are still plastered with the brilliant "flash" art demonstrating the considerable talents of Jeff and fellow artists Caleb, Jorge and Bobby. Call it the mark of quality.

How could we pass up an opportunity to recognize someone known as the "Creatrice of Exquisite Soft Toys"? Gilmer, Texas, native and Southern Methodist University grad Phebe Phillips has designed and created the Phebe Phillips Company animals since 1983. Available at Neiman Marcus and on her website, these upscale plush babies (some price out at $175) come in the bunny, cat, dog and bear varieties. The cool thing is, the Dallas resident also designs a more affordable line of dressable characters and costumes called "Tweakie P." for folks who can't drop upward of $35 on a Phebe Phillips stuffed critter. Priscilla the Bunny, Coco the Black and White Cat, Bailey the Honey Bear and Colette the Pink Poodle are available at Michael's craft stores, along with their snazzy accessories. After meeting the gracious and spunky Phillips, we realized that this woman deservingly has the coolest job on the planet. That inner child of hers can play dress-up as long as it wants to...with Bunny Pudge and Kitty Prima and Little Silly Pup and...

Our neighbor thinks we bake all the time. On Sundays, he thinks we have a thorough house-cleaning regimen. It's doubtful he knows we have cats, not to mention a brimming litter box. Our neighbor can thank Gary Stone, owner and creator of the Dallas-based online store Make Scents candles for the aromatic front we put up. The hand-poured candles come in more than 600 scents--some classic, some pretty unusual. We love White Tea, Rosemary, Pet Odor Eliminator and Sugar Cookie. Then again, we have to admit that while they might not be common candle scents, Dirt, Tide Type (like the detergent), Ben Gay Type and Bourbon & Coke win us over with nostalgia. Lick Me All Over, MD 20/20 (don't pretend you don't know), Super Chiffon, Butt Naked and Puppies' Breath deserve honorable mention as titles alone.