Best Booking
in a Shoebox 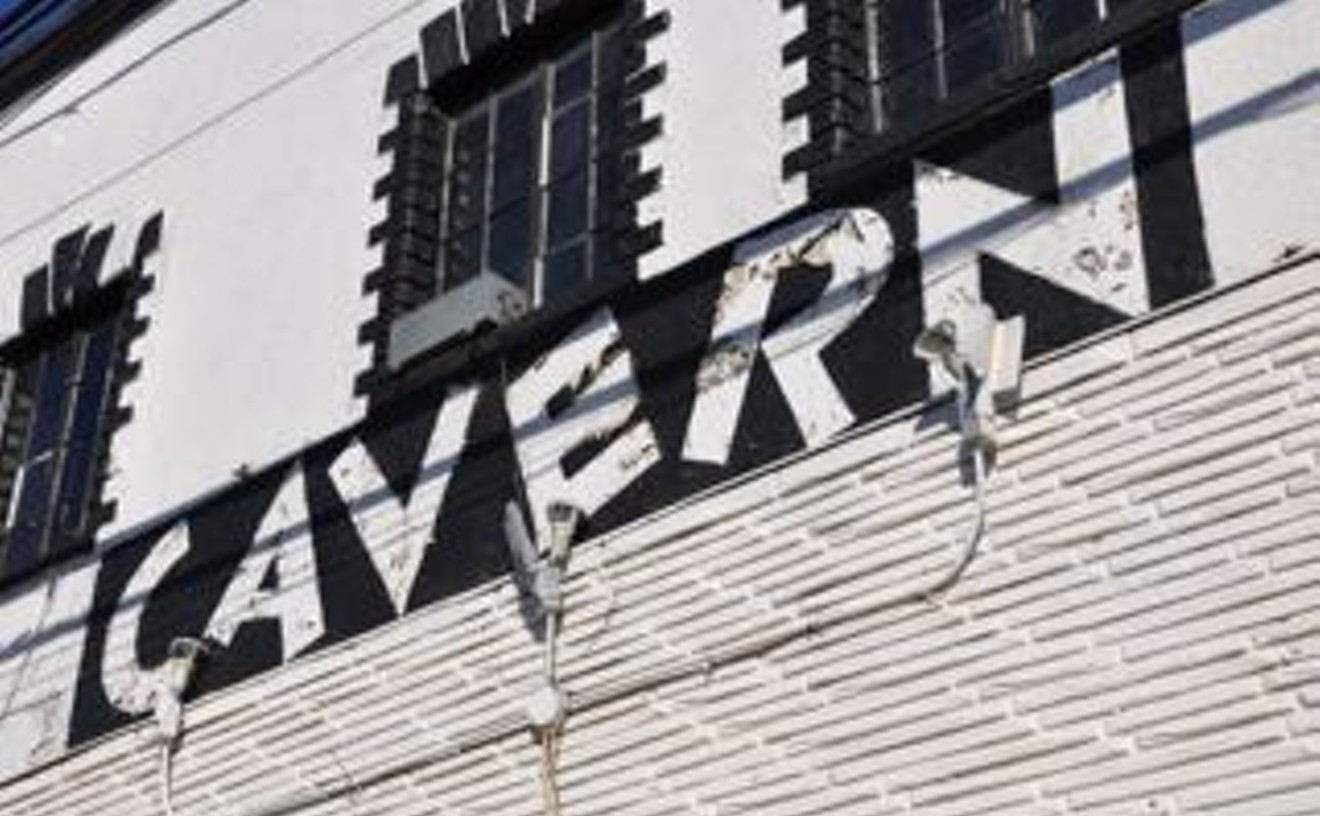 Spune Productions has done the impossible, turning a small club on the meat-market strip of Lower Greenville into a truly viable music venue. In fact, Spune's booking prowess has landed countless crowd-drawing indie-rock acts from Man Man to Devendra Banhart...which has become a problem. The tiny room has only enough space for a few dozen patrons, and the stage is already crowded with musicians. Still, the club favors unknown acts, so some of the best bands are still subject to small crowds, and patrons can always escape the mass of bodies by going upstairs to see DJs spin the newest and most obscure tracks this side of Suede. At any rate, Dallasites are still coming out in droves to test their claustrophobia and see the finest in local and national rock, so Spune must be doing something right. Andy+Hanson
In+Theatre+Three%27s+dueling+farces%2C+%3Ci%3EHouse%3C/i%3E+and+%3Ci%3EGarden%3C/i%3E%2C+Emily+Gray%2C+Kerry+Cole+%28center%29+and+J.+Brent+Alford+swap+beds+and+barbs.
For years this has been the fossil farm of Dallas theater, the place where old plays, old actors and even older subscribers go to take naps. But this year, something happened at this dusty little theater-in-the-square. They woke up and started casting young, attractive, exciting-to-watch actors such as Lynn Blackburn, Ashley Wood, Gary Floyd and David Brown. Artistic director Jac Alder threw some real heat into the season (and made some money) with a hit extended run of The Full Monty. Yep, the boys took it all off in the movie-turned-musical, and the senior citizens who make up the fan base at T3 had to make room for a new crowd of theatergoers who'd just discovered this venue based on the good word-of-mouth (and nice reviews) for that show. This season has some fresh, challenging productions on the boards at T3, including Tennessee Williams' rarely done Vieux Carr (through October 15), Michael Frayn's critically praised Democracy (opening January 4) and Tony Kushner's Tony-winning musical Caroline, or Change (May). Between those they're also squeezing in The Odd Couple (April). Sometimes a nap can be refreshing.

Best Place to Get Unwired

With crystal meth addiction reaching epidemic numbers, it's good news to learn that Dallas has its own support system to deal with the crisis. The mission of Crystal Meth Anonymous (CMA) is to offer help to those for whom crystal meth has become a serious problem. It offers regular meetings, support and fellowship and creates a safe environment in which to stay clean. CMA utilizes a 12-step program to combat this insidious drug that has destroyed lives from coast to coast. CMA realizes it's an issue for our community, too, and offers regular meetings on Monday, Wednesday, Thursday, Friday and Saturday at 7 p.m. It's well-known that admitting there is a problem is the first step to recovery. Perhaps a prudent next step is checking out CMA.

Rock Star: Supernova was the brainchild of Mtley Cre drummer Tommy Lee, who invited two other washed-up former "legends" to follow in the tattooed footsteps of INXS, who picked a new singer in the first season of this CBS talent contest. Making an immediate splash in the first week of the second season was Puerto Rican-born Dallas resident Zayra Alvarez. Her cover of the Evanescence hit "Bring Me to Life" drew mixed results, but her flashy costume, exotic beauty and rockin' bod made her an immediate hit with the judges. But Alvarez's rocky road to fame took a tumble in Week 2 when her take on The Kinks' "You Really Got Me" puzzled the panel. But they kept her around week after week. We suspect this had more to do with her skimpy outfits and outrageous persona than her vocal chops. Still, the former Deep Ellum Liquid Lounge regular made it into the final group of eight contestants. Like a delicious train wreck, you just couldn't look away when Alvarez was wailing.

Time was we used to motor the kids over there in the van during the holiday season to see the Santa sticking out of the second-story window like a burglar caught in the act. Then the kids grew up, and for the next few years we drove the dog over there on Christmas Eve because she liked to bark at the horse-drawn carriages and she seemed to enjoy the pretty lights (or maybe it was just getting to sit in the front seat). Then the dog passed away, so now we just pick up a hot chocolate and a cookie at Starbucks and drive ourselves from one end of swanky Beverly to the other, hazarding the bumper-to-bumper Benzes and marveling at the hugely tacky decorations rich people are willing to pile up on their perfectly manicured lawns to celebrate the birth of Our Lord. Yep, that's a helicopter on that acre of yard, delivering gifts to folks who already have everything. 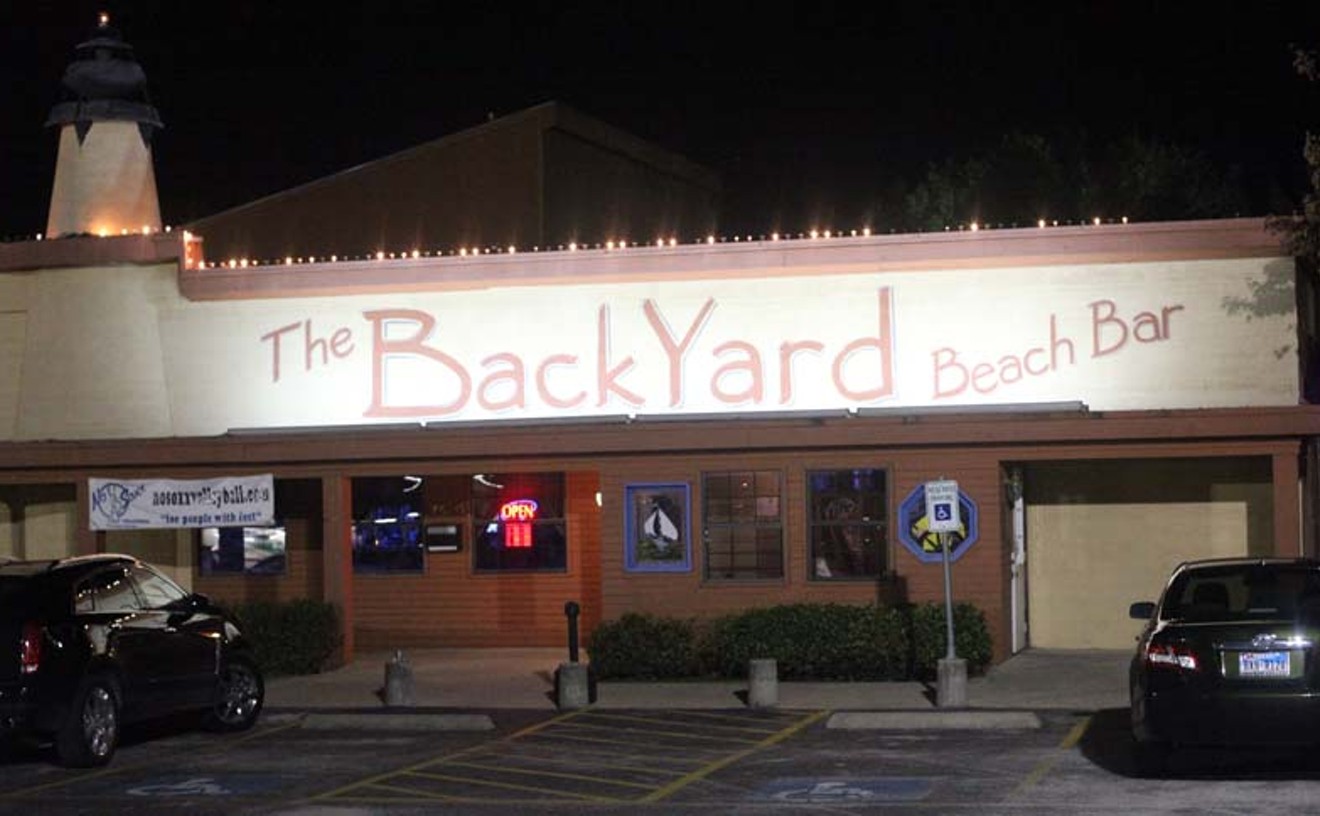 Tucked away in an anonymous nook near White Rock Lake is one of the best-kept secrets in the local saloon society. There are many reasons to recommend this casual and comfy club, but the real hook is located outside. Two pools! One is for swimming (and water volleyball) while the other features a sliding board and side ledges for lounging. Also gracing the outdoor area are beach volleyball courts (with pristine sand) and a tiki bar pouring all your favorite potent potables. Inside, the deceptively large bar offers areas for music (occasionally featuring live entertainment) as well as video monitors usually displaying sporting events. Even better, you'll find plenty of corners for conversation. This place is so spacious that even at peak times you never get the cramped, jostled feeling that plagues so many other establishments. If munchies are required, BackYard Beach Bar offers a full menu of sandwiches, pastas and fried bar favorites.

Absolutely, now that we're in the blogging biz, we're gonna insist till our dying breaths (any second now...wait...here they come...) that Unfair Park's as good as it gets. But we're kidding no one, right? We're still new to the game, and D's been at it for years; we'd be arrogant fools (like FrontBurner--so kidding) to lay claim to the title at this early date, which doesn't stop us at parties, but still. No, FrontBurner's the one to beat because Tim Rogers, Adam McGill and their cohorts are good at what they do--that Great White Snark thing goes a long way compared with the other comers who either take themselves too seriously (Dallas Blog, Unfair Park), ramble on way too long (Dallas Arena, Unfair Park) or don't update enough or have enough to keep us coming back more than once a month (every single blog operating under The Dallas Morning News banner, not Unfair Park). Dallas probably has more blogs per capita than any city outside of N.Y.C.; Christ, we'll even read Angela Hunt's on a slow day, and not just to look at the pictures, either. Still, while we love Dallas.org and Dallas Progress and the other players in this ever-expanding game, hey, FrontBurner's still the top dog. Or not. Ever heard of Unfair Park? It's awesome.

Every October a collection of stellar teenage talent gathers under one roof to compete in the prestigious Heart of Texas tournament. This competition has a long and august history, making it an especially desired contest for young thespians. This invitational event has lured competitors from many regions of the country, sometimes from as far away as Florida and New Mexico. Of course, Texas and the Dallas area are well represented. These are the best and brightest in their respective schools, and the overall level of talent and professionalism belies the tender age of the participants. Many students choose to compete in the "Lincoln-Douglas debate" event, but it is the individual events where these future stars really shine. Categories include foreign and domestic extemporaneous speaking and original oratory, but the marquee events are humorous interpretation, dramatic interpretation and duet acting. The depth of preparation and commitment that these young thespians throw into their performances both astound and excite. The 2006 tournament is scheduled for October 20-21.

Nestled in a low-profile strip center near Maple Avenue, this modest cabaret fairly bursts with the hottest local talent. Fancy-schmancy it isn't, but cozy and comfy it is, and the friendly staff and patrons make everyone feel wanted and welcome. Although smoking is permitted, a state-of-the-art ventilation system keeps the air breathable for non-smokers, and the music is never too loud to inhibit conversation. Oh yeah, the music. Night after night, Phases has Dallas' most outstanding cabaret performers singing and playing their hearts out. Performer lineups and time schedules are somewhat flexible, so give a call or visit the Web site (phasesbar.com) for the current information. Open seven days a week, there are regular drink specials and even a complimentary Happy Hour buffet Fridays at 5 p.m. But it's the sublime music that will keep you coming back. Oh, had too much to drink or just feeling peckish? Walk a few doors down and carry out a pizza from Domino's. Gotta love it.