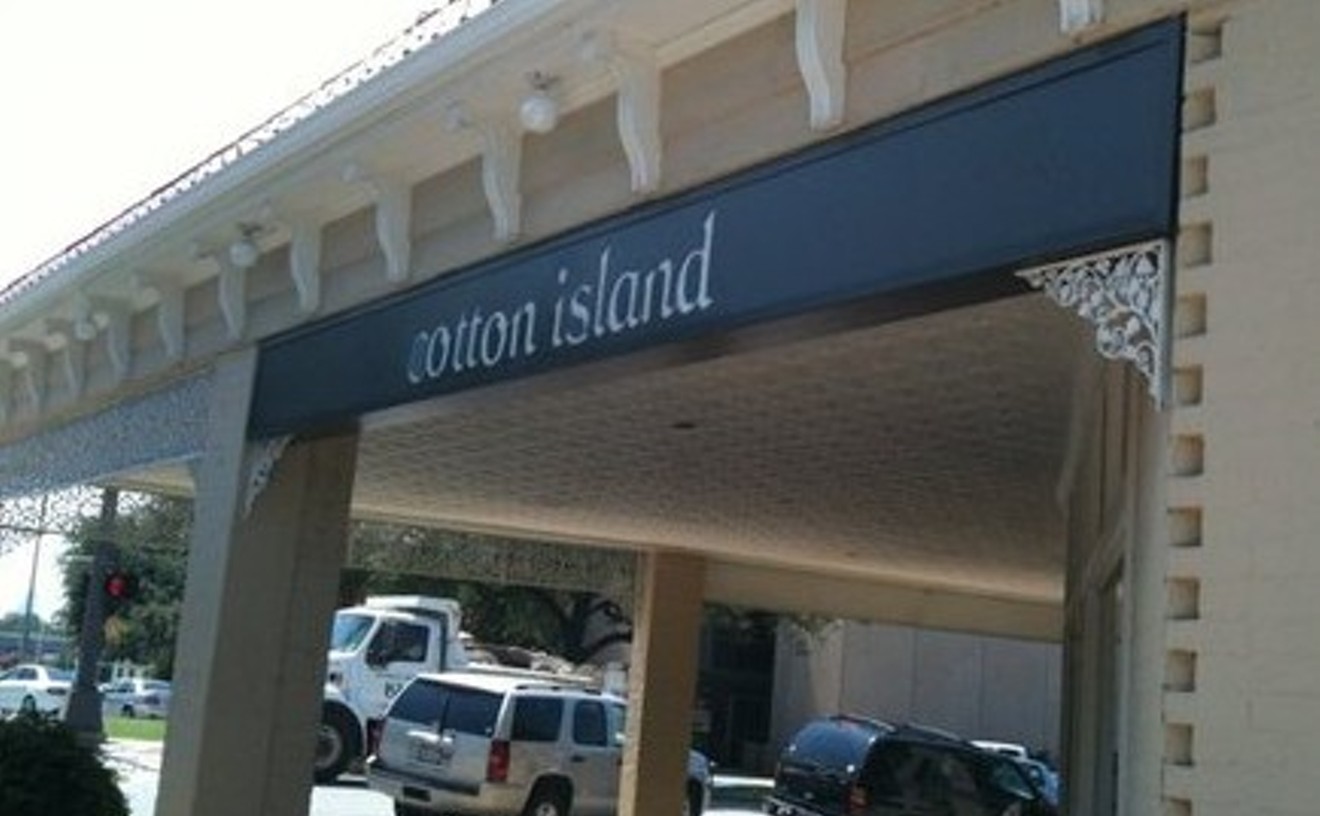 What do you wear when the vibe is casual but you don't want to look like car-pool mom? When you want to have a kicky style but not seem like you're masquerading as a 15-year-old cheerleader? At Cotton Island on the southeast corner of Snider Plaza, you can find colorful 100 percent cotton tops and skirts that not only are cool and flirty but feel that way too. Cotton breathes. As the swelter of summer's end makes a transition to the warm days of autumn, it's great to have clothes that don't stick to the sternum. The shop also carries trendy handbags and Bernardo sandals, de rigueur for a stop at the country club or a weekend at the lake house. And hey, go ahead and take your teenager too. She'll like Cotton Island's minis, T's and flippy skirts.

Neither Stefani McMurrey Watters nor Nicole LeBlanc are, as far as we know, mad. Milliners long ago gave up the nerve-damaging mercury compounds they used at the beginning of the Industrial Age to stiffen felt hats, so unlike Lewis Carroll's Mad Hatter, Watters and LeBlanc don't appear to be crazy—except that they make hats. In 2007.

But that's not necessarily madness. Hats are a home-based Internet business for Watters and a former career and art form for LeBlanc. And besides, they just like hats.

"The only place a lady doesn't wear a hat is in her own home, because then you look like you might have someplace to go," says LeBlanc, sitting with a wooden head-shaped block at her feet among boxes of vintage ribbons, feathers and bows in her home near Mockingbird Lane.

You might be going to a rodeo or a country-and-western-themed nightclub, for instance, and feel the urge to express your inner cowgirl princess. In that case, Watters has just the topper for you at SMartHats.com.

"My signature look is the tiara on the hat," Watters says, referring to the crystal bling she applies to colorful straw hats she imports from China along with most of the tiaras. A woman who might feel silly wearing a tiara, which would be just about any woman not named Queen Elizabeth, can mount her crown on a cowboy hat and look just fine. The garage shelves in Watters' home just north of LBJ are lined floor to ceiling with a rainbow of Chinese straw and silvery jewels, ready for Watters to mix and match and add a "rock-star roll" to the brims—two tight tubes on either side of the head.

There are no bubbling steamers to soften felt, no tiresome stretching of material over a wooden block, but like we said, it's 2007, and hat traditions aren't what they used to be. Today, unadorned hats are usually manufactured by cheap Chinese labor or in Europe. The milliner does the designs and adds the decorative touches. If you think about it, Watters' business, which she started in 2002, is the epitome of the new American economy—foreigners provide the manufacturing, we do the designs and selling, and the Internet and rapid shipping link the maker to her customers.

And if you can get a magazine to publish a photo of a celebrity like Jessica Simpson wearing one of your hats, the next thing you know, you have boxes of hats stacked in your yard awaiting shipping. That happened to Watters, who quickly found out that the combination of celebrities who like free stuff plus publicity can add a kick to your start-up, one-woman business.

But that was early on, when Watters was making hats full-time, hauling them in her car trunk to clubs, where customers would buy them off her head, and phoning up fashion editors to pitch her brand. Now a new mother, she runs the business part-time, mostly online, though her hats are also on sale in boutiques here and nationwide, as are some knockoffs made by people who cut corners with cheaper Chinese hats and plastic bling, she complains.

Even the sort of high-end traditional hats that were once LeBlanc's career at Fleur de Paris, a custom millinery and couture shop in New Orleans' French Quarter, rely on foreign labor. "Most everything I use comes from somewhere else," says LeBlanc, who made hats at the shop for 24 years, the last 15 spent commuting to her job via plane from Dallas.

She quit Fleur de Paris in May, but she still makes hats, either blocking them herself—a steamy, labor-intensive task she hates—or ordering them blocked and then completing them with ribbons, flowers, feathers, etc. Think of it like a painter buying a pre-stretched canvas rather than framing and stretching it herself. Do you care if Picasso tacked his own cloth?

Many of the hand-crafted cloth flowers, stitched ribbons and intricately shaped feathers LeBlanc uses are antiques she has recovered at sales. "Like every labor-intensive craft, it's just not done here anymore," LeBlanc says of her collection of cut feathers, but she might as well be talking about the entire craft. The demand for a stylish cloche hat isn't big enough to support more than the handful of remaining craftspeople who make the basic hat shapes she finishes.

Which is a shame, really, because LeBlanc can think of lots of good reasons to wear hats. "Nobody knows when I'm having a bad hair day," she says. "And people will hold the door open for you."

And if you're a lady wearing a hat—or at least a really stylish hat—"a smile will get you things" you might not otherwise get, like politeness.

And there's nothing crazy in wanting that. — Patrick Williams