In another year in which most of our teams cock-teased us with regular-season foreplay and playoff impotence, the Stars finally gave us reason to explode. On a Sunday night in early May, the Stars advanced to the NHL Western Conference Finals with a classic 2-1 victory over the San Jose Sharks at American Airlines Center. In an epic hockey game that climaxed a fantastic series and prompted lots of bleary eyes, Brenden Morrow scored in the fourth overtime—at 1:23 a.m., thank you very much. After goalies Marty Turco and Evgeni Nabokov traded unfathomable saves for more than five hours, Stephane Robidas sent a nifty pass in the crease to Morrow, who tapped in the Game 6 series clincher and the goal that ended the eighth-longest game in NHL history and the third-longest in Stars' history. The game reminded us again that there's nothing in sports quite like playoff overtime hockey. Screw David Blaine, Stars fans can hold their breath 20 minutes at a time. 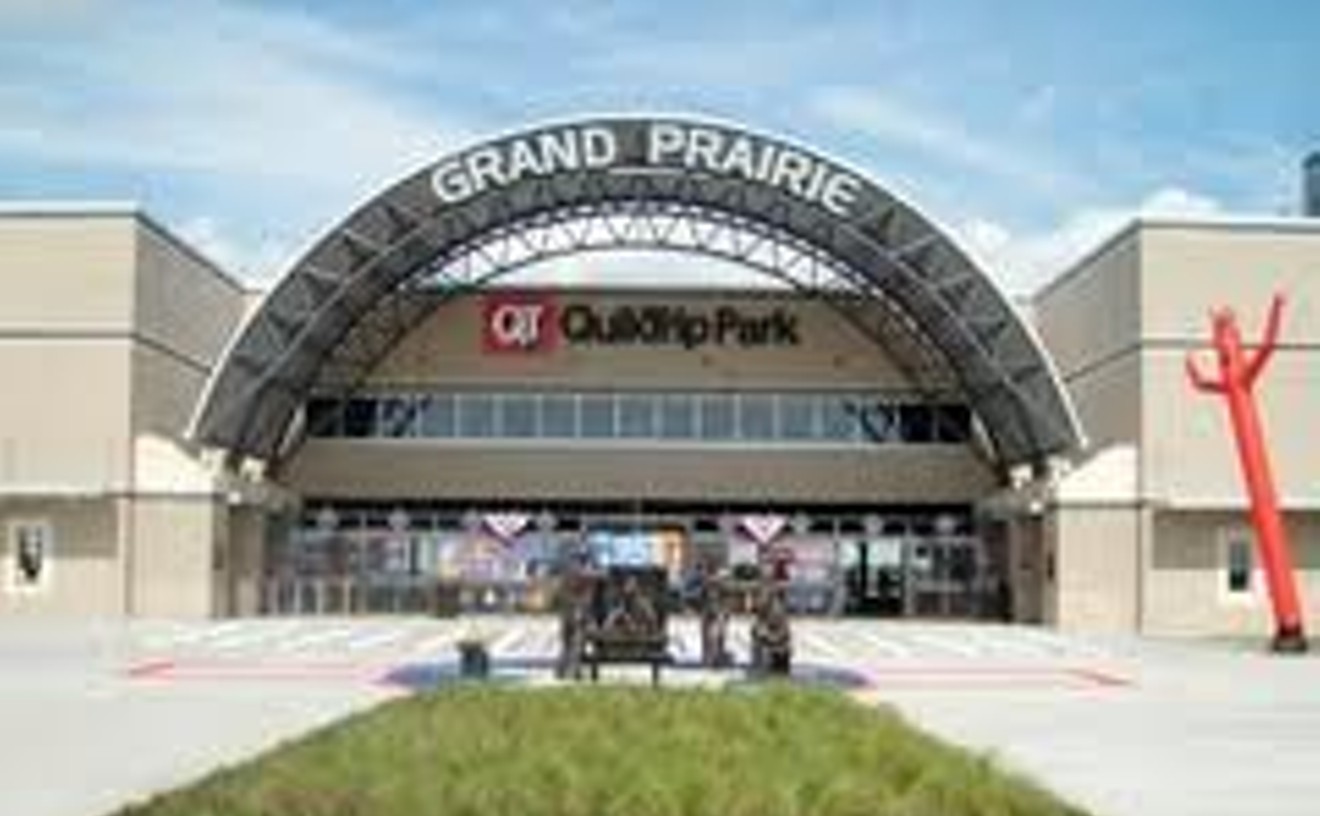 Before JerryWorld opens its doors and grabs this title for the next decade, Quik-Trip Park in Grand Prairie stands as the best place to catch a ballgame. Sure, it's minor league baseball, but this team is good (the AirHogs made it to the championship series this season), and the fan experience at the park offers the most variety and bang for the buck. There's not a bad seat in the house, and with tickets ranging from $6 to $12, it doesn't set you back a couple hundred bucks just to have a night out with the wife and kids. Speaking of the kiddos, they'll enjoy shooting hoops, playing Wiffle ball and golfing in the park attached to the stadium while you head out to the sports bar or cigar bar in left field for a cocktail.

Once upon a time he sheepishly accepted the team's "C" from longtime icon Mike Modano. But this spring he unceremoniously shoved ol' Mo' to the third line and clearly ascended to one of our best two-way athletes. In Dallas' spirited three-series playoff run, captain Morrow was like the legendary Mark Messier, physically checking opponents off their skates at one end and using his finesse to slip pucks past goalies at the other. Modano is the franchise's all-time leading scorer, and there's a spot reserved for his No. 9 in American Airlines Center's rafters, but the face of the franchise now belongs to Morrow.

After a year of boot camp workouts elsewhere, we thought we were ready for this. Then the CrossFight class started. Running, crawling, kicking, punching, push-ups, sit-ups, jump-rope, weights. It's a killer 90 minutes that tests every muscle in the body and produces more sweat than a group hug at NFL training camp. At a dojo tucked into a woodsy corner of Bachman Lake, martial arts master Dr. Nick Chamberlain and Canadian Olympic boxer Martin Mazzera take students through an intense, well-thought-out program of exercise that combines aerobics, plyometrics, interval training, self-defense, kickboxing and martial arts. Halfway through each class, everyone heads toward the lake for a "horse and rider" run (or in our case, slog) up and down a steep hill. In 90 days the training significantly pares fat, improves conditioning and strength, and takes students from slugs to sluggers. Sounds grueling—and it is—but it's also surprisingly fun. And the friendly atmosphere at the studio makes out-of-shape newcomers feel welcome. Students range from schoolkids to women in their 60s. Best part of the workout? When it's over you feel like you've really taken that first step toward getting in the best shape of your life.

Assume that one day humans overcome physics' celestial speed limit and head to the stars. What shape will commercial space travel take?

If predicting the future were as simple as extrapolating from the present, we could make a few educated guesses: Checking a bag will cost you $1.7 million; you will be scanned by a jaded, cranky robot before you board; and your personal hibernation pod will be situated immediately in front of one cradling a colicky baby.

And the spaceport you fly from? It will probably resemble the new billion-dollar-plus Cowboys stadium rising on the Arlington landscape. It's certainly big enough and packed with enough gee-whiz gadgetry.

When we met Bryan Trubey, design principal for the stadium with HKS Architects Sports and Entertainment Group, we intended to talk about its futuristic, high-tech touches. The stadium's two monumental arches, for instance, weigh 3,255 tons each and span 1,290 feet, rising 320 feet above the playing field—high enough to hold the Statue of Liberty upright. The arches will support the world's largest domed roof, which will cover about 661,000 square feet and include twin-paneled doors that retract to reveal a 105,000-square-foot opening that mimics the opening in Texas Stadium, left there so God can still watch his favorite team. Massive, clear 180-foot-wide doors cap the end zones. A canted glass exterior wall floods the interior with light. The world's largest video boards hang 110 feet above the field.

And so on. The tally proves that the stadium will be, as promised, one of a kind. But what the numbers don't capture is its sleek, futuristic beauty. For all its massiveness, the dome's sweeping arches and canted glass give it the air of a spacecraft. In artist's renderings, the dome appears to be waiting to leap into flight.

That's a long way from the industrial, men-at-work feel of today's Texas Stadium—but then so are today's Cowboys. And that's the point. For Trubey, designing the Cowboys' home was a process that began with defining the team's brand.

"My thing has always been context," he says. "For me, it was never about what my personal expression would be and applying that on every project I get so that I have a branded look. "

That becomes clear when you compare the Cowboys' stadium plans with the recently opened Lucas Oil Stadium in Indianapolis, another HKS project on which Trubey was design principal. Where the Pokes' home is a sleek, modernistic ellipse, the Colts' new $720 million digs, with its red-brick exterior, gable roof and exterior trusses, have the air of a Midwestern factory, evoking that city's blue-collar manufacturing history.

For the Cowboys, Trubey and the HKS team had to look beyond the obvious, namely, the team's name. Anyone familiar with the hip, money-making enterprise that Jerry Jones and family have assembled knows that the team that Terrell Owens calls home isn't about Stetsons, piped shirts and pointy boots. The Cowboys are a world icon for sport, says Trubey, whose family has lived in Oak Cliff for a century. Like the New York Yankees and Great Britain's Manchester United, Dallas Cowboys is a name recognizable internationally.

"When companies want to project to the international audience...they choose when they build something to project an image in a very progressive, modern, edgy way," Trubey says. "And so that led us toward a modernist expression for the stadium itself. We wanted the building to project all those characteristics...all under the context of modern architecture."

The Jones family was also committed to building "an important piece of civic architecture," he says, and were willing to commit the money to create it (as were voters in Arlington, which will kick in $100 million toward building the dome.)

Art and marketing. Corporate branding, modernism and football's grungy, high-tech glitz. All of it is blended together and brought to life on a gargantuan scale to create a vision that looks distinctly toward the future while keeping one foot in tradition. You can't get much more "Dallas" than that, and the fact that the stadium will open next year in a suburb midway between Dallas and Fort Worth somehow just seems that much more appropriate.

"Sports teams globally, when they build a building, they're not like a retailer. They don't have 1,500 chances to get it right," Trubey says. "The building will be the dominant physical expression of the team worldwide, especially with a brand like Cowboys."

It could very well be the dominant expression of Texas in the world. Rome has its Coliseum, the icon of Roman power for two millennia. We ask Trubey if he felt extra pressure from the idea that he could be not just creating a really big building—and helping spend more than a billion bucks—but defining a culture for centuries.

Trubey modestly demurs. He knows he's been blessed with the chance to work on major projects in a profession he loves. He emphasizes the role of patrons like the Joneses in supporting massive projects such as the stadium.

"Well-maintained," he says simply, "the building could last indefinitely."Patrick Williams