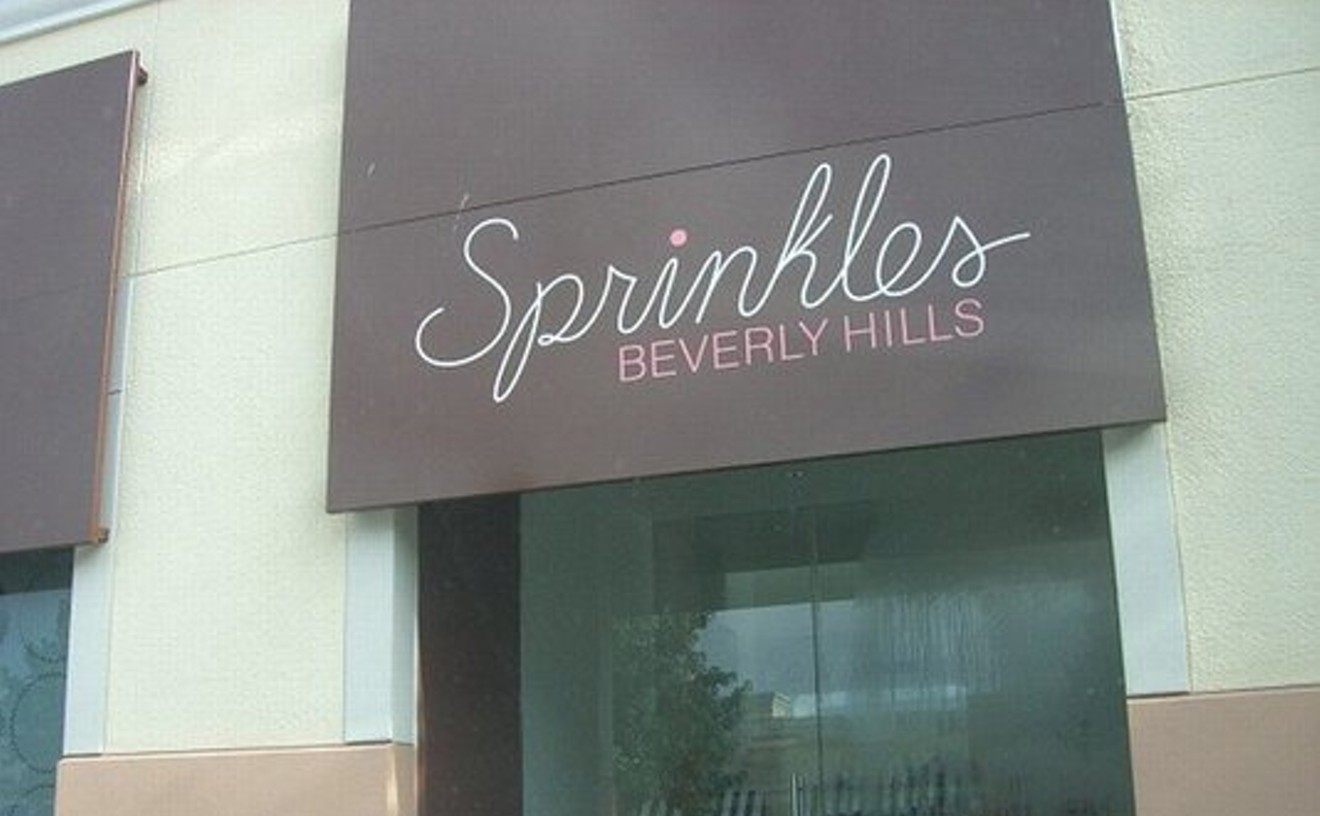 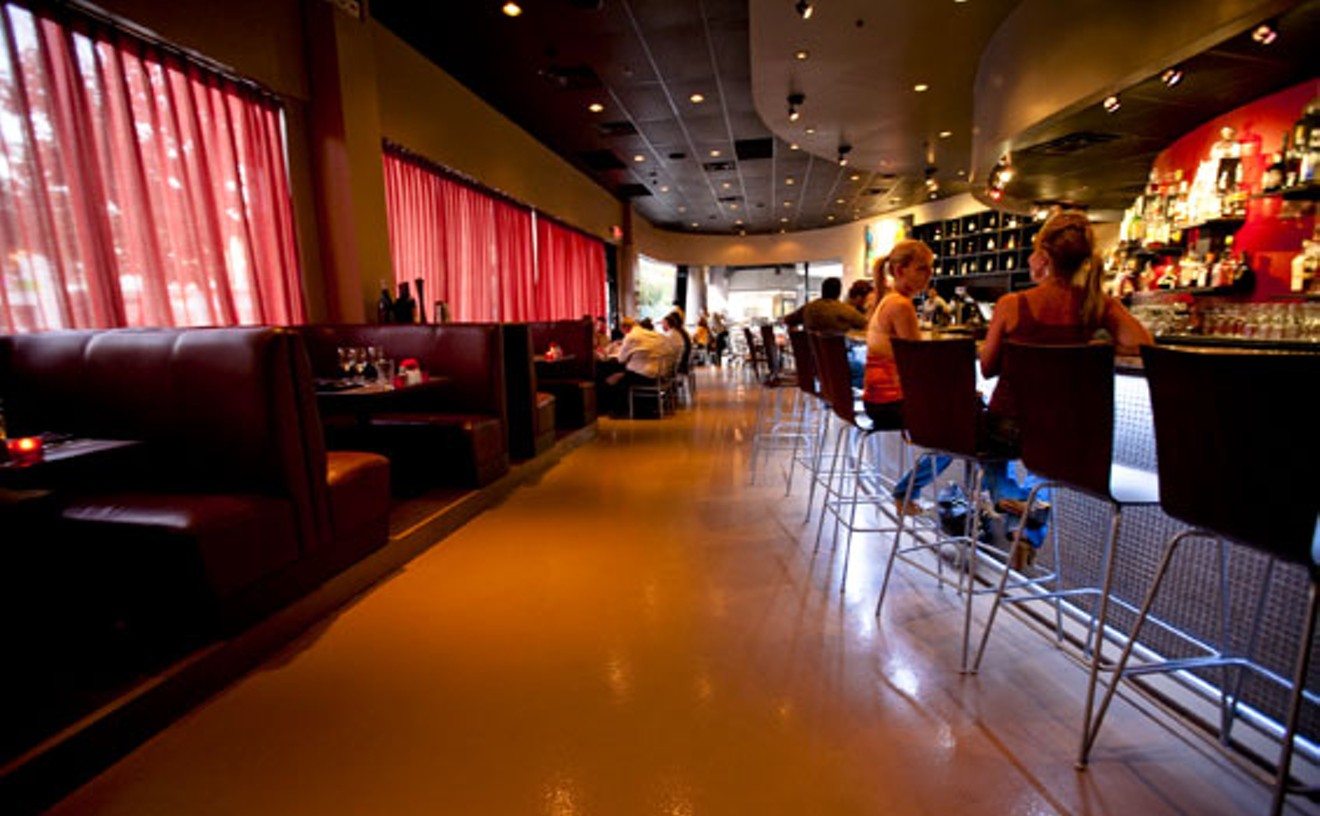 The new-ish Quadrangle space has three key things going for it. First is location, obviously. Second is their no-reservations policy, forcing incoming guests to loiter around the bar until other diners clear out. Finally—and most important—owners Robert Petrie (not the one played by Dick Van Dyke) and Tony Porcaro, who once held sway at Nick & Sam's. Many steakhouse bar patrons seem to have come along with the pair, as weekend evenings are a mix of dinner guests, well-heeled gents, top-heavy babes and, um, professional women. It's Nick & Sam's, only with more light and a smaller age gap. 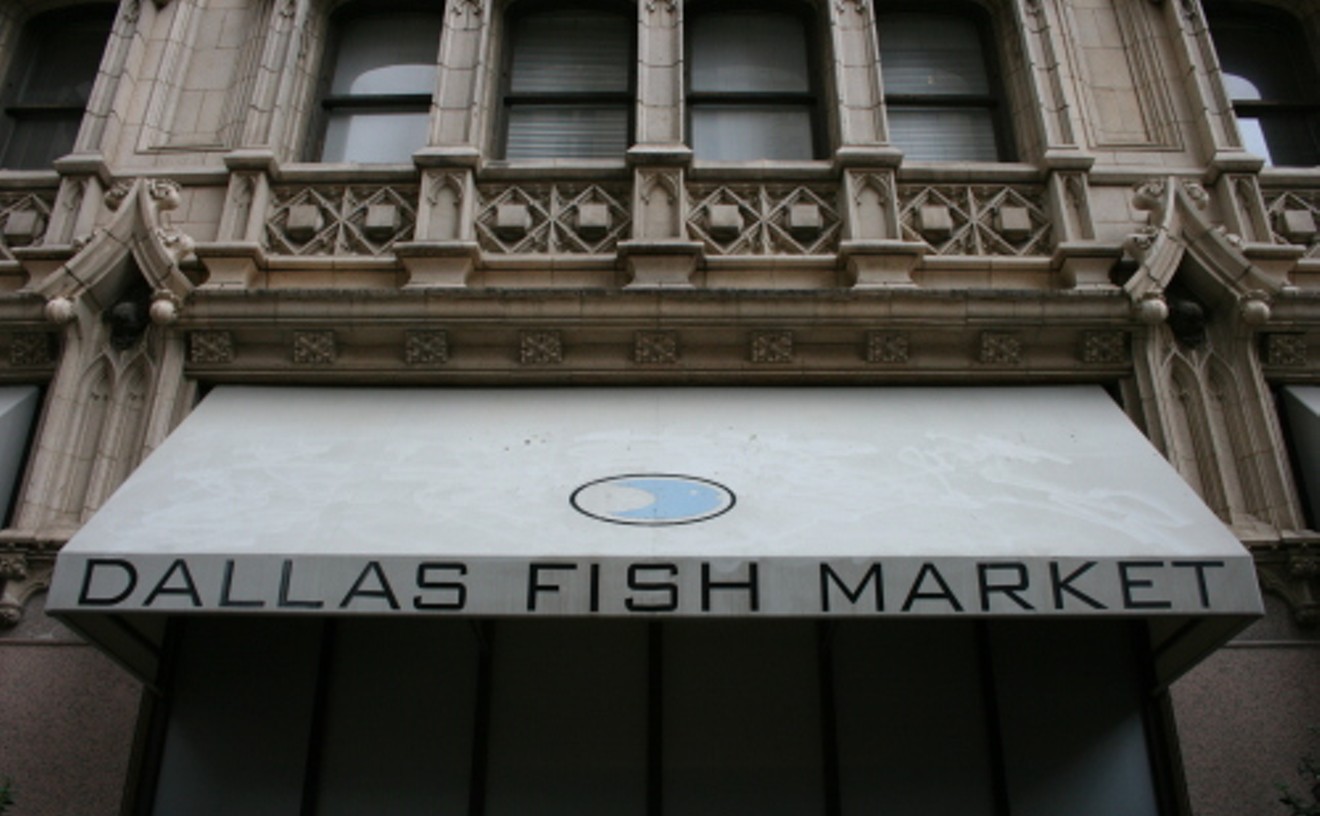 Who ever heard of Randy Morgan? The Dallas Fish Market chef got his start in Seattle and worked the kitchen at Oceanaire, back when it was good—but no one really mentions his name. Still, few chefs have as much respect for fresh seafood. For the downtown restaurant, he sources the best stock from wherever he can find it: Prince Edward Island (mussels), Alaska (crab), Maine (lobster), Hawaii (swordfish), Louisiana (redfish), the Columbia River (sturgeon) and so on. He not only cooks the stuff, but presents his own take on sushi. Which is all meant to say there's something for every sort of fish lover here—and we're not the only ones who think so. Bon Appetit placed Dallas Fish Market at No. 5 in their list of the nation's top seafood spots. 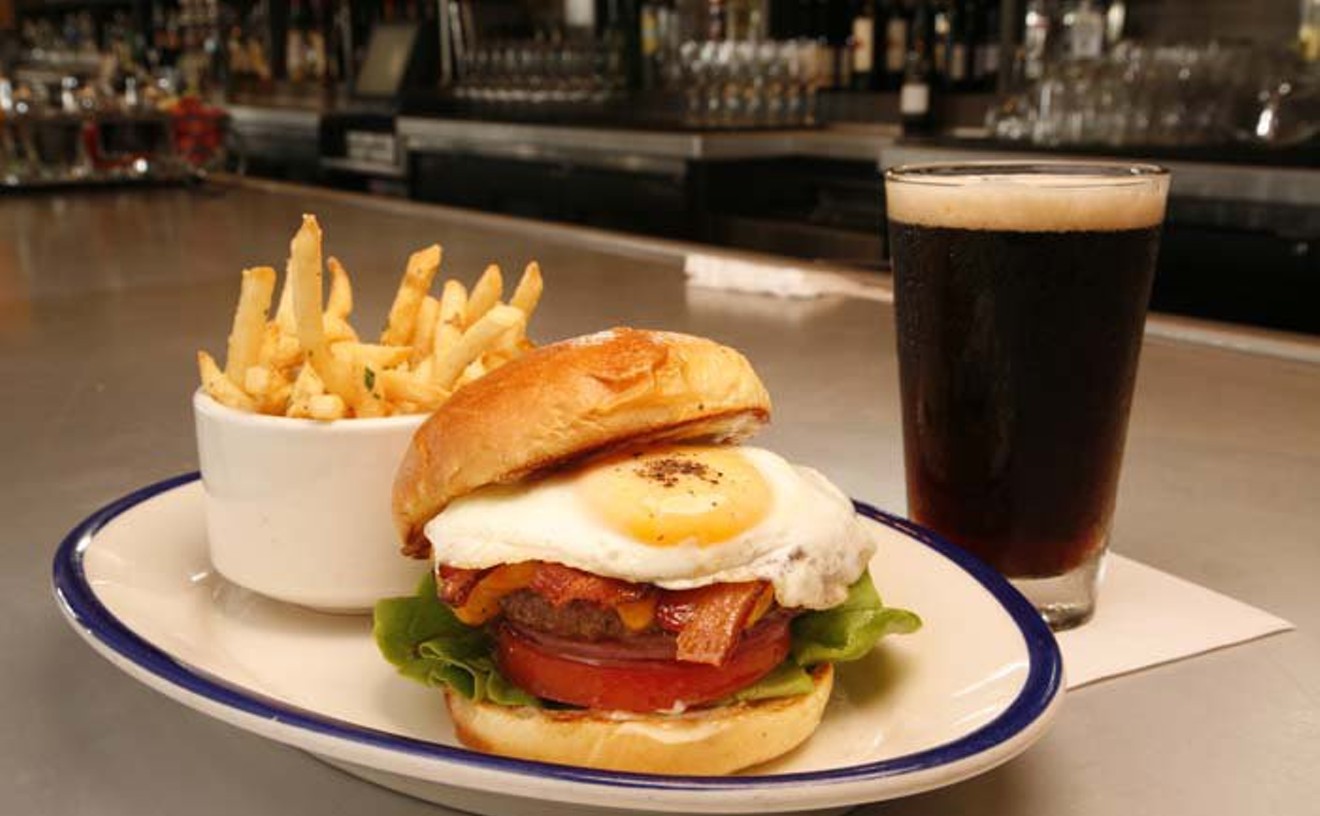 No doubt there is something magical about the number 3: In rhetorical flourishes (life, liberty and the pursuit of happiness), in religion (the Holy Trinity, the Three Patriarchs, the Three Holy Cities of Islam), in nuclear accidents (Three Mile Island). Now that same magic has spread to the culinary rage known as the slider, which is most often served in threes. Derived from White Castle hamburgers and named for the ease with which the greasy treats slide down the gullet, these mini-burgers have been reincarnated into high-end gourmet globs, using salmon, fried oysters, crab, etc. to make their point. We feel the Porch makes that point better than most, with its chopped brisket sliders, an appealing appetizer of barbecued beef, creamy coleslaw and horseradish-infused pickles served on a small bun. No need to dip into the side of barbecue sauce, which seems like an embarrassment of riches. Instead you'll be searching for adjectives to describe this sweet, tangy, mouth-watering concoction. There, that's three.

Note we didn't say most authentic—'cause in this case we don't much care about authenticity. Green Papaya's version of the Vietnamese staple is big (as Texas) and hearty (as a motherf...never mind). There are fancier soups out there too. But the Oak Lawn restaurant's pho is simple and satisfying, which is all you really want. The broth itself sends warm shivers of meatiness down your spine, but you can add a choice of beef, chicken or meatballs (try the latter). Spiked with onion and cilantro and full of noodles, it's more than just a modernized, Texafied pho. It's a meal. 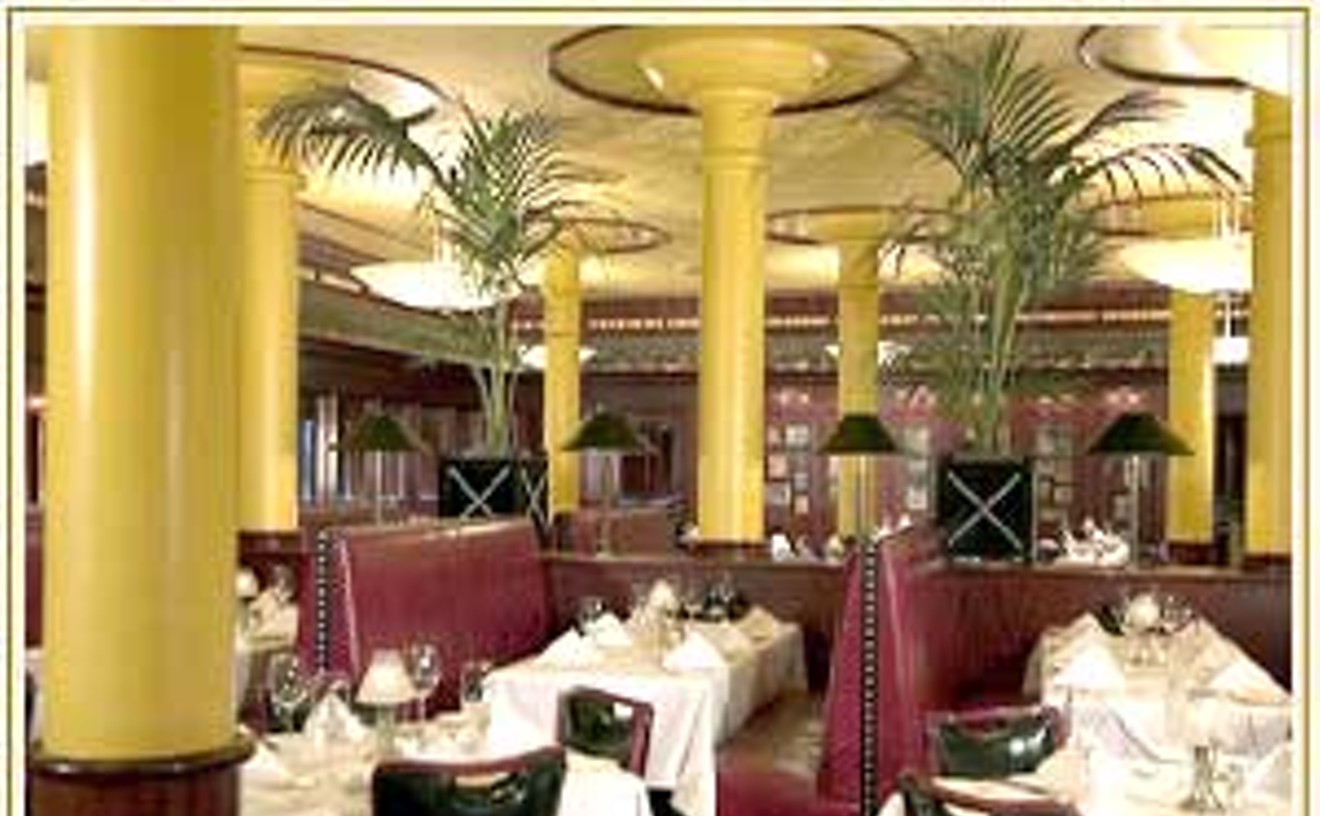 With some 500 seats to fill, the kitchen at Pappas Bros. has to work hard, not just to meet the demands of a dinner rush, but to create that demand, as well. They do it with cuts—slabs, rather—of prime beef they age for up to 40 days and grill to a rare perfection. That sheen of pan juices and seasoning burned onto the skin, the oh-so-delicate rare center...this is meat heaven. More than that, really, for they employ several wine stars to find the right match for your meal and furnish one of the city's most extensive cellars. Yes, it's an expensive place. But, damn, the memory of those steaks will stay with you for a long time after. 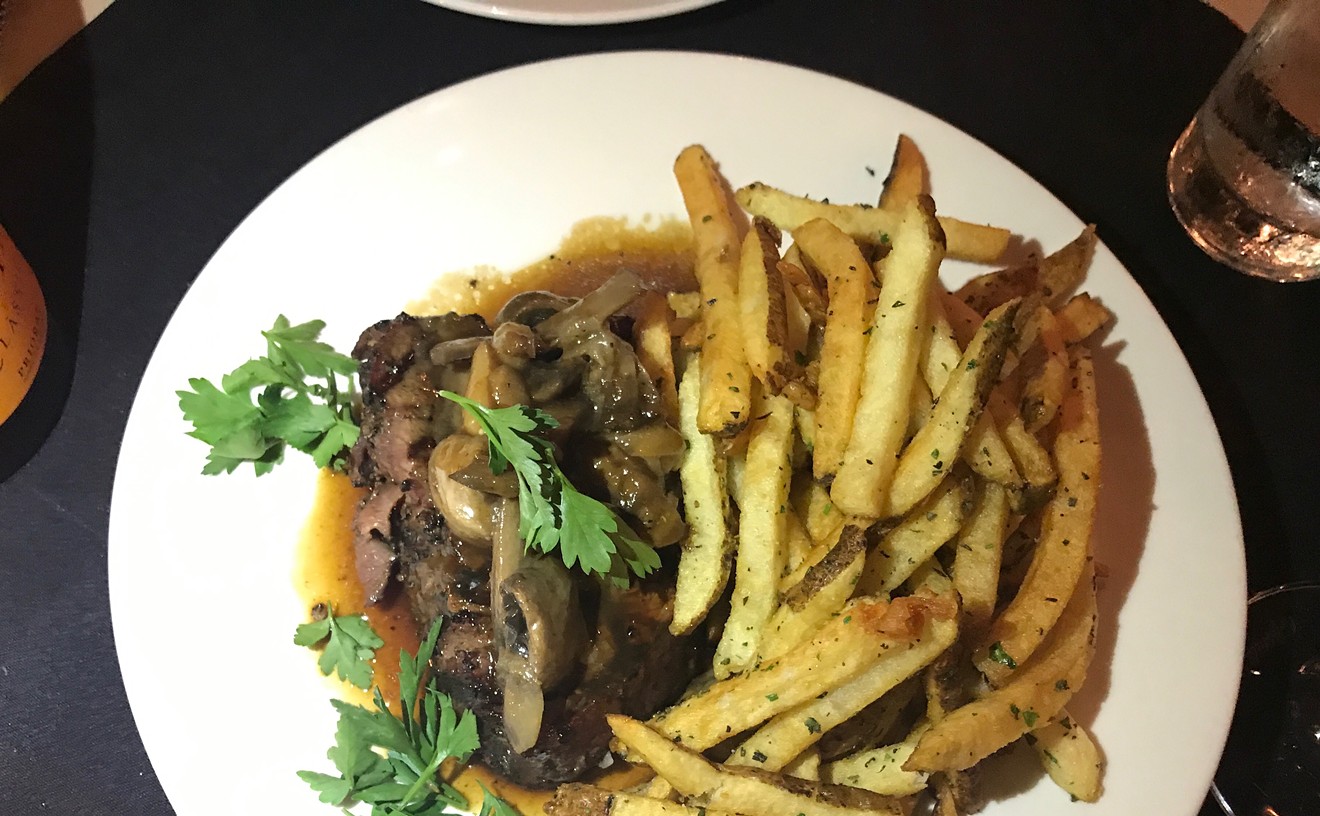 The Grape is the kind of place you want to huddle in on a Sunday: low-key, casual atmosphere with great food...and unlike Denny's, it's dark enough inside no one can see your bloodshot eyes. But really, it's all about the food. You can go meaty, with steak frites. Need something old-fashioned and hearty? They serve oxtail hash. If you're in the mood for a fancy meal, then you can order rainbow trout. But if you want something Denny's-ish (only prepared by a great chef), they'll whip up griddlecakes, waffles, or bacon and eggs too.

Lest you think there's only so much one can do to improve a slice of raw fish, allow sushi chef Kiyomi Sano to set you straight. Yeah, there's the whole attitude thing. The place is consciously hip, to say the least. But Kenichi has thrived through Victory Park's death throes thanks to delicate fish, chef Bodhi Durant's "badass" tuna tacos (we told you—attitude) and, most of all, the sake know-how of sommelier Hung Nguyen, who gained Level 2 certification from the Sake Educational Council of Tokyo, making him the leading expert in Texas and one of only 40 or so Level 2 masters in the world. His assistant, by the way, holds Level 1 status. So, piece of fish, great sake, perfect pairing—we're in. 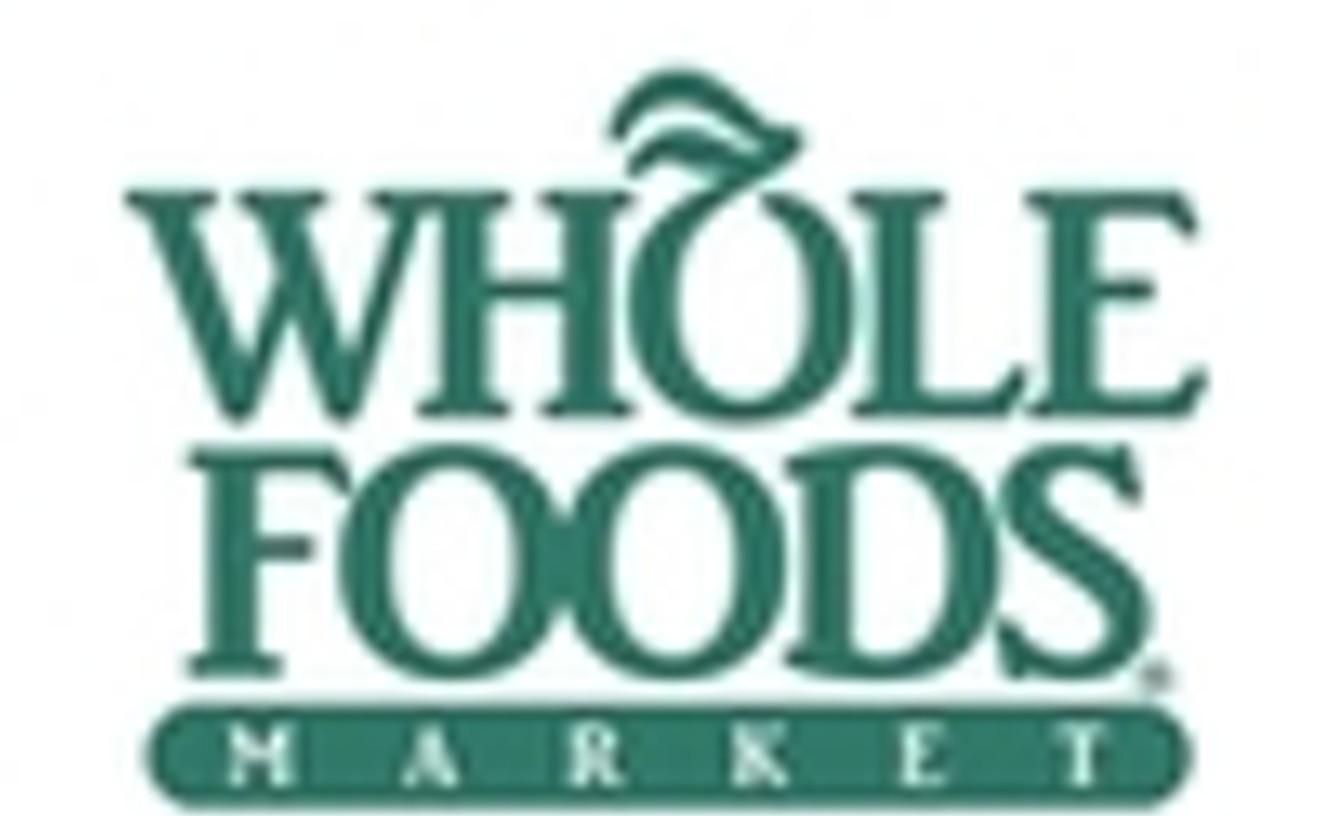 The best part of shopping at this Whole Foods is that when you inevitably get hungry at the sight of all that food, all you have to do is mosey over to the bar once you've filled your cart. The salad fixings are broad and varied, from healthy greenery to hard-boiled eggs and at least three different kinds of tuna salad. The hot food bar offers a number of different things depending on the night, from home-style meat and mashed potatoes to Indian, Asian or North African. And once you've made your selection, you can enjoy your meal on the patio or inside while gazing at the big, bright tropical fish tank.