Randy Galloway has a prominent radio show and Tim Cowlishaw a gig on ESPN's Around the Horn, but nobody in this market spins an ink-stained tale like Gil. Case in point: Who else could piss off not just a fan base, but an entire country? LeBreton's February 28 column was 1,235 words, not a one of which was "Nazi" or "Hitler" or "effyouhosers." Why, then, did seemingly all of Canada show up with fire and pitchforks, demanding an apology? Because Gil made a clever, daring—albeit controversial—analogy comparing the superfluous spirit and unbridled jingoism of the 2010 Vancouver Olympics to those held in Berlin in 1936. While LeBreton compared and contrasted a spirit, he reminded us all that the whole world has grown oversensitive, wholly oblivious to common sense yet simultaneously in detailed tune with the smallest speck of political incorrectness. Kudos.

Can we retire this trophy already? The giant German is pushing our policy on term limits with his unprecedented streak of consistent greatness. Again last season he was good; his surrounding cast not quite good enough. His critics call him soft and a playoff choker, but we call him the best player in Mavs franchise history. And it ain't even close. Last year he surpassed 20,000 points, set a franchise record with a dazzling 29-point fourth quarter in a memorable win over Utah, made his ninth NBA All-Star team and led the Mavericks to the playoffs. But the moment we all finally appreciated Dirk was in July when—if only for a day—we pondered life in the lottery without him after he opted out of his contract via free agency. Typical Nowitzki, however, he re-upped in Dallas. For less money.

The Mavericks traded for Caron Butler and the Cowboys drafted Dez Bryant, but no local athlete made an immediate and lasting impact like Texas Rangers pitcher Cliff Lee. Acquired in a July trade with the Seattle Mariners for a handful of prospects, Lee's first four starts were the stuff of legend. He came within two outs of pitching four consecutive complete games while striking out 25 and walking only one. Lee's command of the fastball is dazzling, as if he is placing marshmallows atop a cake. His emergence provided the Rangers with the pitching ace they coveted for, oh, 40 years and prompted them to bury their American League West foes. With Lee on the mound, for the first time in a long time the Rangers felt like a real, live Major League Baseball team.

Love him or loathe him, you watch him. Whether he's unplugged in the Channel 8 studios or underdressed in a funky Hawaiian shirt down at Dallas Cowboys training camp, what Hansen says matters. The other local sports talking heads deliver the highlights and insights, but Hansen shapes opinions by voicing his. He's got the ego to chastise Jerry Jones and the balls to ask this question of Cowboys' offensive coordinator Jason Garrett: "What does it say about a coaching staff that it had no idea what it had in Miles Austin? There's this talented guy right under your nose, but if it weren't for an injury you would have never given him his chance." That, my friends, is Hansen-style.

Best Head for the Hills

There are plenty of good camping options to be found within three or four hours of the metroplex, but few of them offer the kind of scenery, wildlife and rock climbing opportunities you'll find in Western Oklahoma's Wichita Mountains National Wildlife Refuge. With a large herd of bison, the refuge is your best bet in the region for a true, in-the-wild glimpse of the beasts that used to roam this part of the country by the millions. It's also home to more than 240 species of birds, several prairie dog towns and more than 800 head of elk, all of which you might run into as you hike the many miles of nationally recognized hiking trails. So pack a tent, head out for a long weekend and get some fresh air in those lungs, city dweller. And make sure to stop in Meers for the world famous Meersburger—just don't ask for mayo, or they'll call you a sissy. It's Oklahoma, after all.

The Mavericks' Rodrigue Beaubois seemingly had this one wrapped up after he set career highs in points, rebounds and blocks during a 40-point offensive outburst on March 27 against the Golden State Warriors. But as surprised as we were to see the rookie backup guard dominate like Dirk, watching Rangers catcher Bengie Molina hit for the cycle on July 16 against the Red Sox was a true sports miracle. "Pigs have flown in Boston, Massachusetts," said Rangers TV play-by-play voice Josh Lewin as Molina—self-proclaimed as "one of the slowest guys in the world"—stopped at third base in the eighth inning with a stand-up triple to complete the historic feat while Lewin's partner, Tom Grieve, chuckled. Molina also managed to slug a grand slam as part of his big day, leaving no doubt that his performance was the best of what we didn't think we'd see this year. 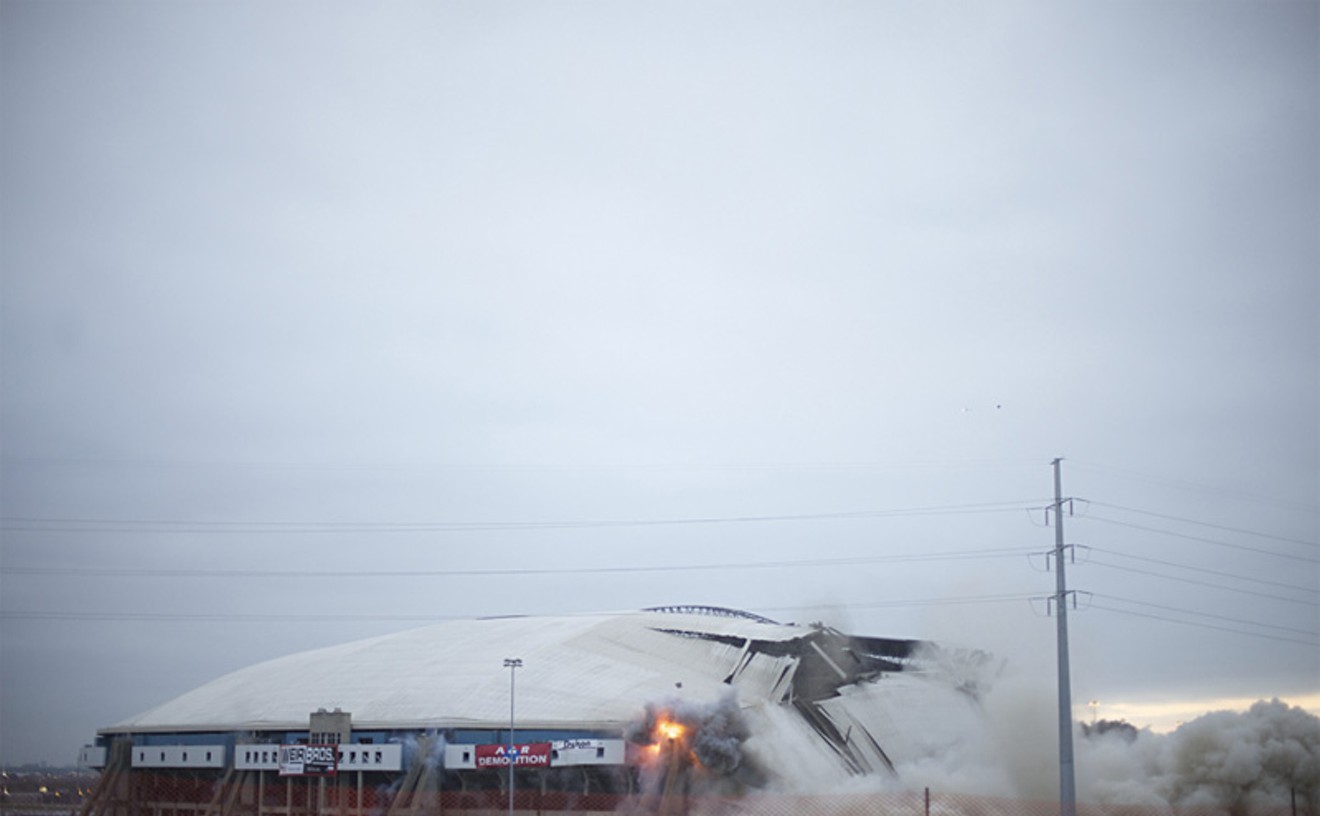 Granted, it will be weird around here without Flozell Adams. And seeing Mike Modano in a Detroit Red Wings sweater will drive us crazier than bat shit. But on April 11 we lost a dear old friend that took hundreds of players' memories with it. A lot of us grew up with Texas Stadium, and were sad to see it go down. Just after dawn the world's most recognizable hole in the roof was imploded into a hole in the ground, symbolically tearing a hole in our heart. Christened by Tex Schramm, nurtured by Tom Landry and canonized by Roger Staubach, Troy Aikman and Emmitt Smith, Texas Stadium was built by 17 National Football League Hall of Famers and destroyed by 2,700 pounds of dynamite. Just like that, in less than a minute, Texas' most recognizable architecture this side of The Alamo was gone. Texas Stadium, rest in pieces.

When former hitting coach Rudy Jaramillo balked at a contract extension and bolted for the Chicago Cubs following the 2009 season, the Rangers faced the difficult task of replacing someone who had been here for 15 years and was thought of as the best in the business. GM Jon Daniels considered hiring unproven fan favorite Rusty Greer, but he ultimately pulled the trigger on Clint Hurdle, who led the Colorado Rockies to the World Series in 2007 during his eight years as manager. While the offense hasn't been perfect this year, the combination of Hurdle's success and Jaramillo's rough year in Chicago proves a change was needed. The best evidence can be found in Josh Hamilton, who struggled last year while Jaramillo tried to eliminate his toe-tap and then made the adjustment under Hurdle and became an MVP candidate.