After just three seasons with the Dallas Stars, Jamie Benn has already flown up the ranks to become the face of the franchise. Not since Mike Modano rode his feathered mullet into town have we seen a player with such skill lace up for the celestial skaters. Benn has seen his point totals increase with each season, and with another year of experience and salty vets Ray Whitney and Jaromir Jagr coming aboard this year, "Benner" could be poised for a true breakout. His combination of finesse and brute strength are not often found on the rink, making him a lethal force and the embodiment of the team's pesky attitude. Speaking of pesky, Benn had an appendectomy last season, so now there is nothing holding the British Columbian back from ultimate hockey glory.

Don't let Adrian Beltre's recent onslaught confuse the issue: Josh Hamilton is the Rangers' star. And don't let Hamilton's expiring contract cloud your judgment: You want him, you need him, you have to have him. Maybe not for what the market will demand — he'll be asking for roughly all the money ever, with a player option for the change in your couch. But still. He and Beltre produced roughly the same last year, right around .300 with 100 RBIs and an OPS nearing .900. Trust us, neophytes, those are gargantuan numbers, and Hamilton's have only grown in 2012. Together with that style, that swagger, that story, you can't help but admit: This dude's got it all. How 'bout we wait till November to get all depressed about it?

Josh Hamilton was terrible during June and July, hitting a pathetic .190 during an eight-week stretch. In media interviews, he made ominous allusions to private struggles, leading to worries that he was relapsing on his crack-smoking habit. Turns out, he was just trying to quit chewing tobacco. Before and since, however, Hamilton has had a typically outstanding season, at the top of the American league in RBIs and home runs. He also happened to turn in one of the signature performances of his career. On May 8 in Baltimore, he hit four home runs in a game, only the 16th time in history that's happened. It was Hamilton's return to form in the fall that's provided comfort to fans, but it was that one magic night in May that propelled his bat to the place Hamilton will be one day: Cooperstown.

It's easy to confuse this gym for a prison yard: The stripped-down interior and bare-bones furnishings don't imply a cushy afternoon, sipping lemonade post-sauna. But that minimalist approach to fitness is the Ross Avenue location's source of strength. There are no distractions here. Instead, there's a revolving workout program that changes daily, so you can't rest on your lumpy, unchiseled laurels. The center's intense approach to exercise winds up working out your entire body, not just the areas that you're most comfortable flexing in public. Soon, your frame slims down while your muscle mass builds, and you can't help but notice a feline touch of agility in your previously uncoordinated gait. The demanding nature of each class combined with the supportive mentality of your fellow sufferers is a 180 from traditional gyms, where folks wander aimlessly, lifting things without intention. But maybe most important is this: When you leave a rigorous session that you initially couldn't believe you would finish, you realize your limitations are strictly mental. If you can do this, you can do anything.

This town's greatest sideshow of late-night humanity is situated at the swirling nexus in Serious Pizza and the area between the shop and its two next-door neighbors: July Alley (bar) and Elm Street Tattoo (inkery). Deep Ellum's rock 'n' roll finery is all on display, as hungry, sweaty, drunk, music-buzzed people wait patiently in line to put ludicrously large slices of pie in their faces. The tattoos, the piercings, the ill-advised leather trousers, the incredible awkwardness of standing 6 inches from a be-mohawked couple fighting furiously over toppings! It's a glorious scene, and it's available every weekend and a fair number of weeknights too. Watch too for the ever-present row of dudes looking on enviously as the pizza guys twirl and toss dough high above them. "Does that get chicks?" one sodden young patron asked us earnestly not long ago. We told him the obvious answer and turned back to the show.

Best (Or Possibly Most Ill-Advised) Cursing Out

"Fuck with me and you will have a huge asshole," Sweeney memorably promised his opposing council, a guy named Chad Arnette from Kelley, Hart & Hallman. It was an email conversation about scheduling conflicts that somehow went completely, wonderfully off the rails, landing on legal blog Above the Law as well as our own Unfair Park. The two sides couldn't agree on a date for a deposition, you see, leading Sweeney to eventually let Arnette know that he felt the other lawyer to be a "pansy," an "ignorant slut" and a "gutless attorney." There was also something in there about Sweeney shoving his boot so far up Arnette's ass "he'll be talkin' out of it." Arnette's firm promptly filed a complaint with the court, and Sweeney seems to have been sacked from Cozen O'Connor soon after. Worth it, we say.

Scott Griggs was elected last summer, ousting the wildly unpopular, frequently absent Dave Neumann. Honestly, they probably could have run a reasonably charming sock monkey against him and still shown Neumann the door. But Griggs has quickly joined fellow council members Angela Hunt and Sandy Greyson in what we can only term the Axis of Making Sense. He's fought against gas drilling within city limits, almost single-handedly pushed for better regulation and higher standards in the city's boarding homes and questioned the fuzzy math that's led other city officials (including Mayor Mike Rawlings) to advocate for a toll road in a floodplain. He has a bizarre tendency to show up at council meetings giving off the distinct impression that he's done the reading and knows something about the issues he's supposed to decide. Despite this dangerous eccentricity, we're still grateful to have Griggs sitting at the horseshoe.

Only three miles from downtown but a world unto itself, the North Wynnewood neighborhood in Oak Cliff is proof the 1950s weren't just about insanely grinning pipe-smoking dad figures in beltless trousers next to coral-green cars with cartoon tail fins. North Wynnewood is the best of '50s cool architecture, beautifully maintained for decades by families who never moved, occupied now by a crowd that's younger and more diverse but just as loyal to the neighborhood. Wynnewood sits on 150 acres of gently sloping hills loosely bounded by Interstate 35 South, 12th Street, Vernon Avenue and Illinois Avenue. Low-slung mid-century modern houses were built to standards we can only dream of today, several designed by the architects DeWitt & Swank. Many still look new. The houses, one to one-and-a-half-story brick in the 2,000- to 3,500-square-foot range, occupy large lush lots on artfully meandering streets, with huge backyards, many of them still dominated by those brick and stone '50s barbecue pits the size of small chapels. Crime is low for Oak Cliff. Values are up almost 60 percent in the last 10 years. An active neighborhood group guards against trouble and thinks up easygoing social activities. North Wynnewood manages to be both deeply staid and really interesting without going quite David Lynch — a rare trick in a rare jewel of a neighborhood.

For more than five years, City Council member and former Mayor Dwaine Caraway has been the city's loudest voice against the unchecked menace of dudes who don't belt their pants at the waist. In mid-June, to our inexpressible joy, Caraway announced that he's relaunching his anti-sagging crusade. It's about deference for ladies, he told a packed house at a press conference in City Hall. It's about self-respect. And now, suddenly, it's about health. "Underwear is meant to protect your inner self from your exterior clothing," he boomed confidently. He cited one of the great dangers of saggers who ride DART. "The germs immediately exposed from the body are waiting on the next passenger." Sadly, a planned "Saggin' Summit" was canceled in late June. Caraway said he'd received such an overwhelming positive response, more time was needed to accommodate everyone who wished to participate. 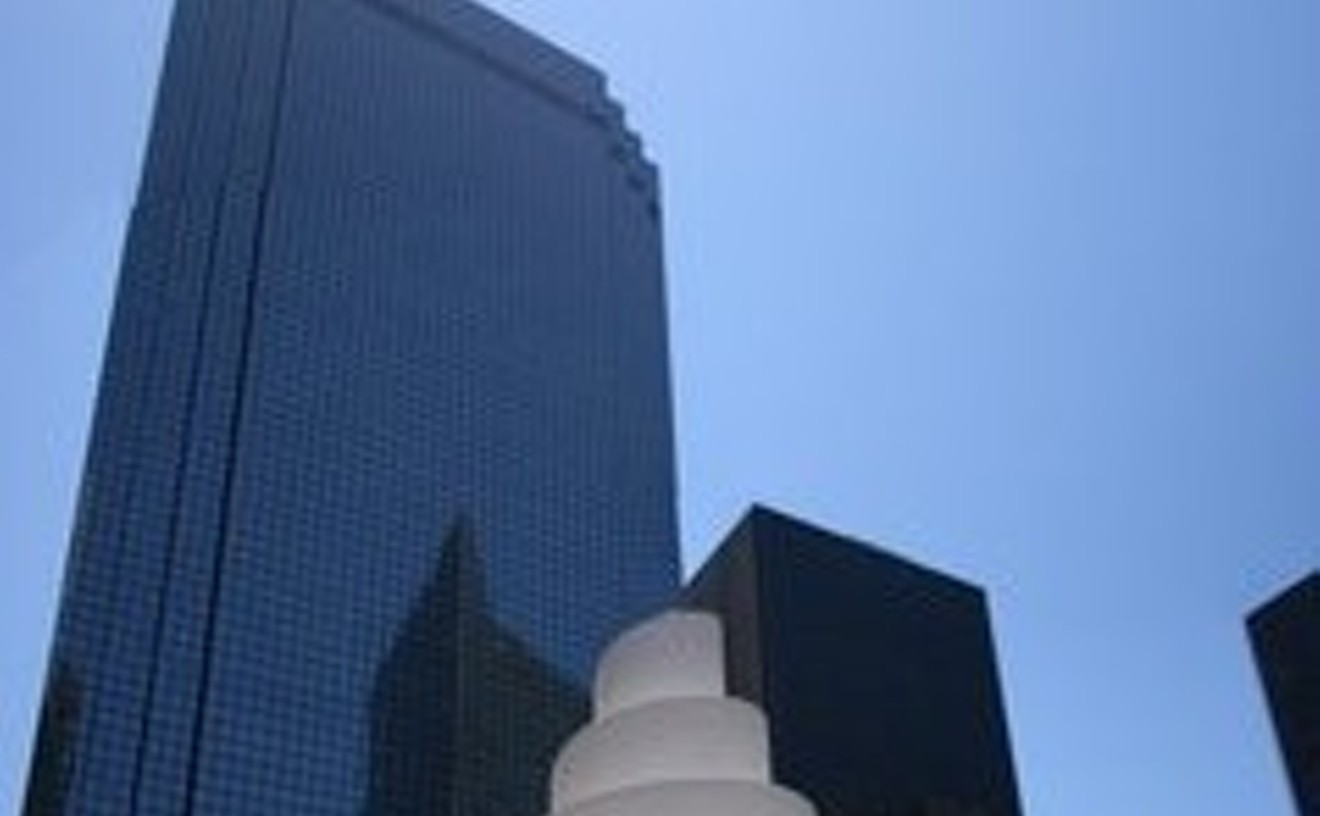 Thanks-Giving Square is a little enigma in the heart of downtown, a tiny, roughly triangular slab of land given over to a sort of park. There are murals there, and a fountain, and best of all a gorgeous, spiral-shaped chapel, featuring a stunning ceiling inlaid with stained-glass. It opened in 1973, with its stated mission is "to offer a place for all people to give thanks to our Creator." It has hosted any number of interfaith events over the years, emphasizing the way gratitude can unite us across religions and cultures. But you don't have to care about any of that to enjoy it. Just sit near the cascading rock fountain and listen to the water rushing gently downhill or stand in the center of the chapel and look up. In a downtown that often lacks beauty, Thanks-Giving Square is a moment of pure poetry.