BEST NIGHT AT THE MUSEUM 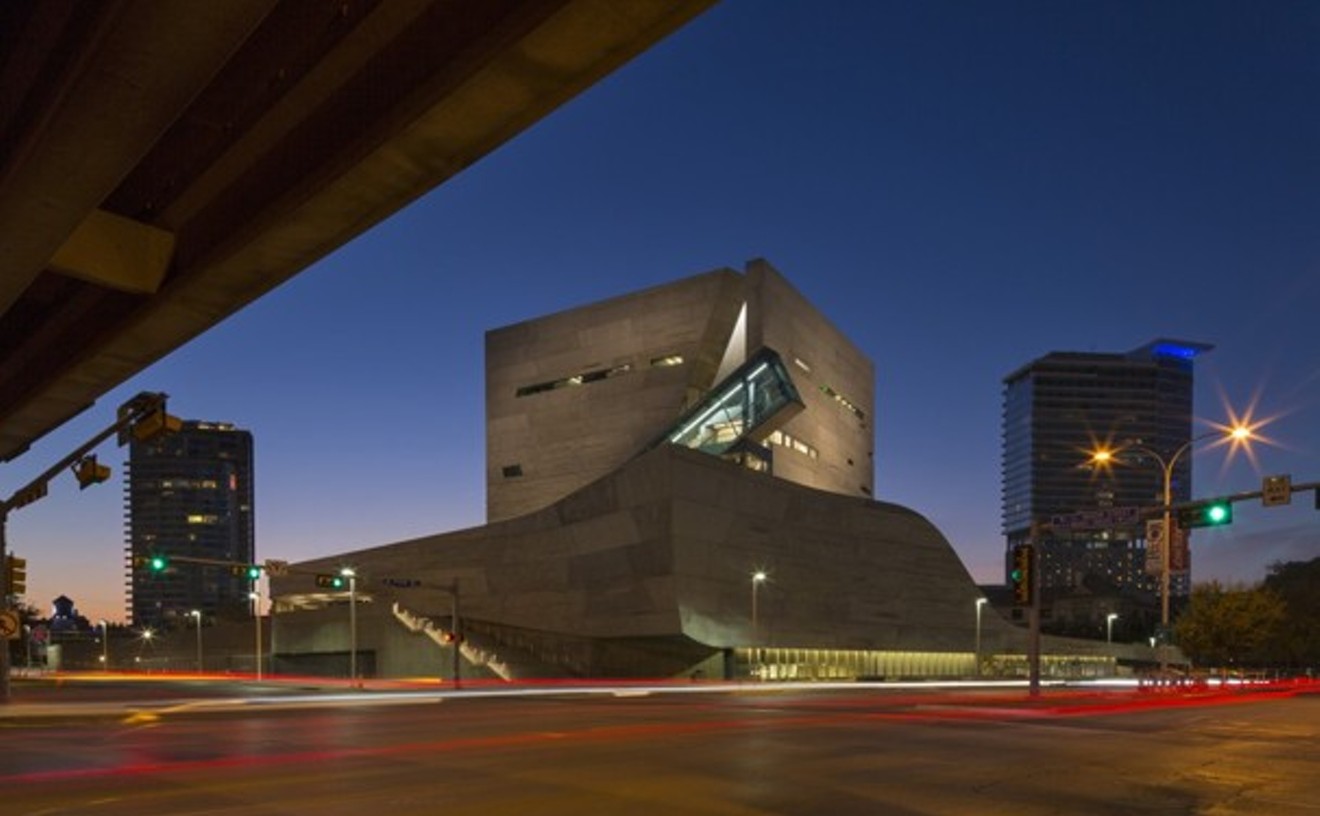 The Perot Museum is magical enough in the daytime. Subtract children, add booze, keep the doors open extra late and it gets even better. The Perot's quarterly Social Science event provides a new twist on the science museum experience. The programs — with topics such as the science of relationships and sound — are interesting and well-executed. But the real appeal is that Social Science allows you to be in a really cool museum drunk after dark. It's every nerdy teenager's dream.

We talk often about the content, status and potential growth of emerging art in Dallas, so it was nice to see that lip service transcend into a cohesive, well-curated gallery show during this extensive DMA offering. While DallasSites provided the historical framework for how things have grown into themselves, Available Space gave us the best of what's happening right now. Through Art Foundation's curation project, the fantastically named Boom Town, we toured a cohesive blend of styles, approaches and career-pinning all in the DMA's main gallery. Off in the wings the story unfolded further, with performance art showcases and panels by PerformanceSW, video art through the decades by Bart Weiss' treasured Dallas VideoFest, and hands-on workshops at Oil and Cotton's outpost. Just to complicate matters further, regional hooligan collective HOMECOMING! COMMITTEE built its subversively splendid example of 3-D thought, Post Communique, a show that shattered and rebuilt North Texas' art history for everyone's thoughtful amusement. It was a snapshot, a moment to pause and in-your-face proof of how good our talent pool really is.

Whether it's keeping up with the ever-happening dialog about Dallas arts or starting its own, Green Bandana has stepped in to fill the gaps — especially in those chasms that exist between big institutions and individual artists. GB doesn't stop there: The blog posts — penned by now-solo operator Darryl Ratcliff — share all available information regarding how and where to see great art through a positive, critical lens. We know what you're thinking: "All of that sounds great, but sometimes I want to step away from direct conversation and blow off steam." Yeah, we all do. And Green Bandana does that too. From its mash-up parties that involve anything from projection art, live music, nail sets, sculpture, open bars and bonfires, to its open-mic nights and public art initiatives, like the Dallas Love Project that will post inspirational works along the JFK motorcade route in upcoming months, Green Bandana infiltrates every entryway to our lives and artfully booby-traps them. This unsung organization fuels so many creative programs that a contact buzz is impossible to avoid. Not that you'd want to. 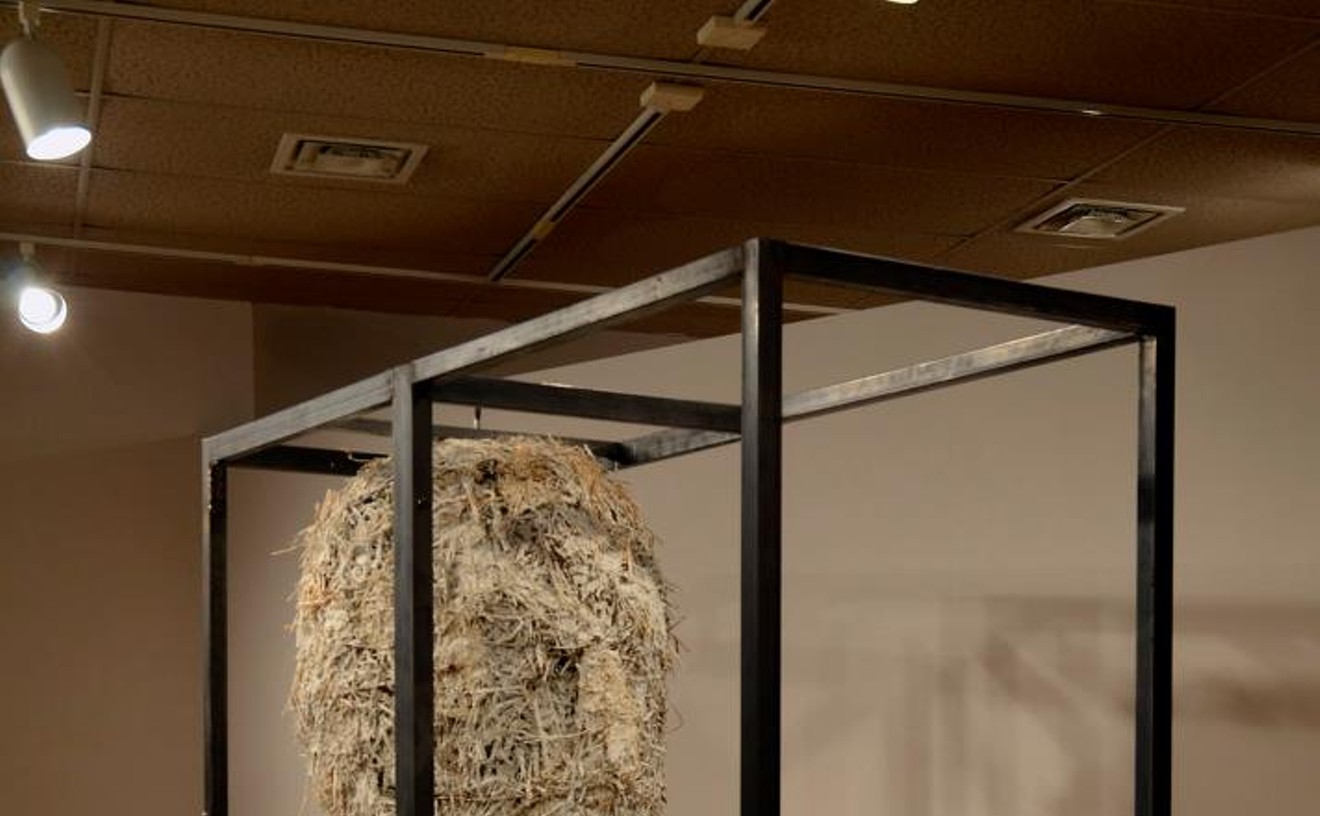 New galleries are emerging all around us. Through all of that hustle, Nancy Whitenack's Hi Line haven remains the standard for well-selected and collectable Dallas art. She has chosen a stable of talents with unique perspectives who are willing to extend the tangents of where existing work is already pointed. Nobody shown at Conduit is content to simply fill in the grid, and that's a tribute to the caliber of the space and its leadership. There's also a balance there, an energy that teeters between the established, repped works in the main showrooms and the more experimental, budding and often very strange works offered in the Project Room, curated by Conduit's assistant director Danette Dufilho. That equilibrium is what makes Conduit a starting — and often also an ending point — for any gallery night. It's also refreshing proof that an exceptional retail art space can be successful while still taking chances.

This year's Pin Show did what it had to in order to raise the stakes after 2012's impressive event: It skated across the cultural surface tension and lured Dallas' most fashionable away from Uptown, across the bridge and into a West Dallas warehouse. Once there you entered a scene resembling an underground party in a Marfa airplane hangar. Two firetruck bars acted as alcohol's first responders to a compound unapologetically filled with beautiful people in floor-length furs. Filling out the room was more eye candy: a reckless pingpong game in one corner, and four women dressed in updated WWII factory garb stationed up front, adorably seated behind vintage sewing machines. Blasting the room with music was soul outfit The Danny Church Band, who also provided the models' energetic catwalk soundtrack. But most important was the attention paid to styling and artist promotion. All who went to Pin Show left knowing exactly which looks, accessories and start-up labels they liked most, and thanks to its organizers' refined eyes, there was plenty of exceptional designer talent to choose from. 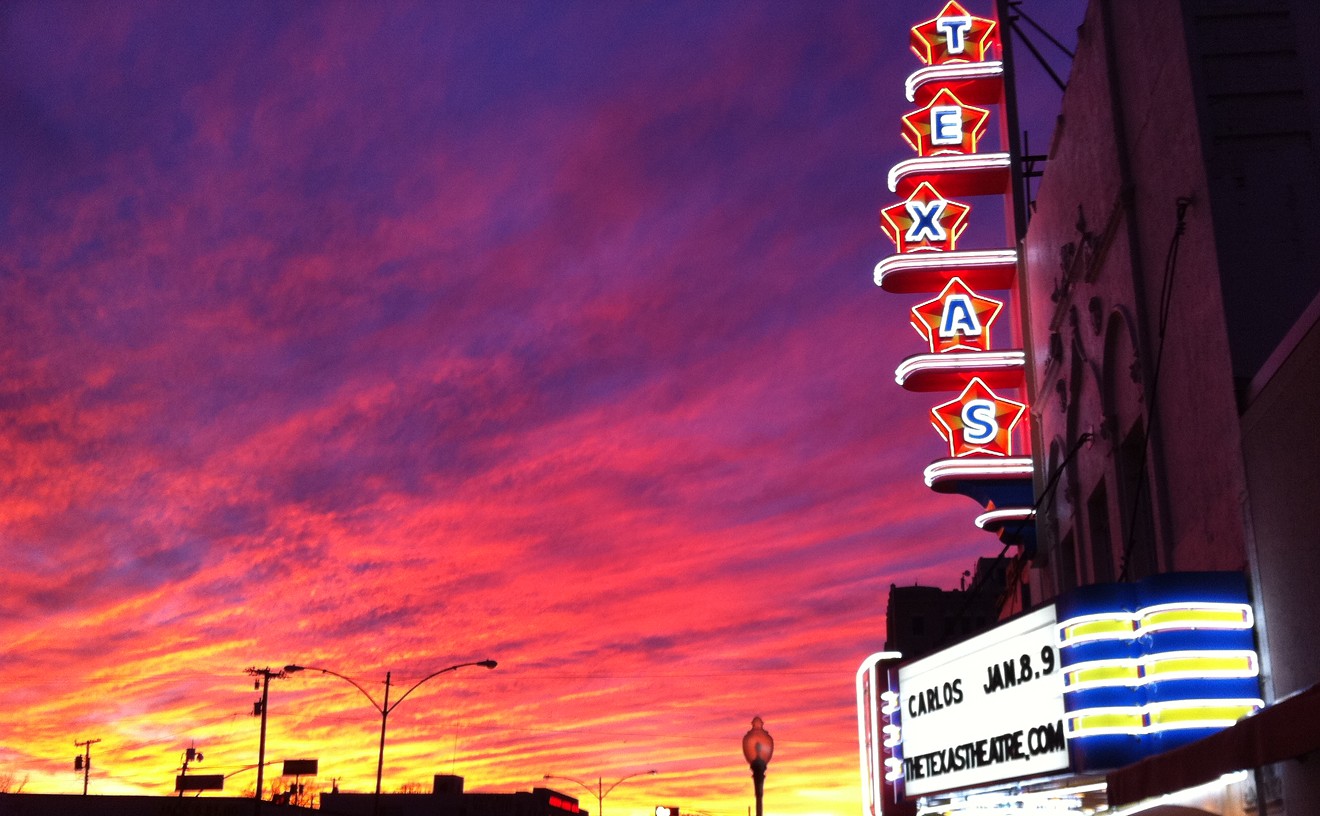 Considering this one-screen indie theater is run by four dudes with day jobs, it would be impressive if Texas Theatre's programming simply remained consistent. It would be nice if the bar were just a friendly place to drink or if you could occasionally see a less-conventional act performed there, like a comedy or DJ set. But for Aviation Cinemas, the venue's eventful puppet masters, chugging along was never an option. Instead, they've become a community cornerstone, showing the grittiest, most daring examples of new film available, counterbalanced by wrap-around themed repertory flicks — most of which align with corresponding parties, cocktails and music sets. Then, they use every piece of their animal to deliver behind-the-screen comedy shows, an art gallery in the rafters and a judgment-free cocktail bar. It's an oasis for writers, artists and filmmakers; a place to share ideas and theories all while pounding cinema-themed highballs and dropping it down deep on the lobby's dance floor. You can go to dozens of venues to catch a movie, and there will probably be teenagers talking on their cellphones behind you and you might walk out feeling like the garbage you saw stole your lunch money. At Texas Theatre that would never happen. Every film shown is carefully curated so it attracts people who love movies. It's a safe place, and it doesn't hurt that they pour a great drink.

Remember just a few years back when the DMA was a completely different animal? Since the arrival of director Maxwell Anderson and tech guru Robert Stein, it feels like someone has opened up the windows. Let a little air in. Even did the neighborly thing and invited you over to hang out and slyly poke around their digs. The Dallas Museum of Art has taken massive strides, expanding its conservation department, boosting visitor engagement with its Friends program, improving information culling and tech connectivity, and making a grand offering of free admission. It's the ultimate public gift, and it's changing the cultural current of how Dallas perceives the art-viewing experience. Free admission allows art to integrate into our daily lives, rather than be a luxury or a special outing. Now you can pop into the DMA to see that thing your friend posted about without stressing over the cost of the visit or amount of time allotted to make it a worthwhile mission. And when you're there, you can't help but notice a change in the tone of the space. Everyone just seems happier, from staff to visitors. It's a valuable gift to our community and deserves eternal praise. Good work there, DMA.

Ken Price at the Nasher

What you could not understand until seeing Price's work, assembled and justly arranged as it was here, is the sum and scale of the items he created. When he began his career in the '50s, Price worked intimately, with a focus on jug-like vessels and petite cups. The life that would eventually spring from those — the grandly bending, sensual tubes, eggs and geometric links that bridge them all — grew larger in scale but remained focused on connectivity and human interaction. From a distance, the collection resembled primordial creatures on a psychedelic planet. Up close, they looked like life incubated from a beautifully vibrant petri dish. Were it not for the Nasher's commitment to funding and curating shows of this magnitude, Dallas would never have had the privilege to experience this stunning retrospective. Perhaps more important, the exhibition was so cunningly arranged that it left us feeling elated, joyful and appreciative of Price's lifelong drive toward innovation.

When Deep Ellum's newish property management company, Deep Ellum 42, a group that's gained local support by pledging to retain the initial points of interest in old, vacated neighborhood haunts, met Apophenia Underground, the area's newest guerrilla art collective, something amazing happened. Jeff Gibbons and Justin Ginsberg — the humans behind the secretive art group — pitched an unlikely plan: They asked Deep Ellum 42 if they could use those empty buildings, many of which had no electricity, as short-lived art spaces. Not only did Deep Ellum 42 agree, they handed them the keys to an unleased city. Since that first show in February the neighborhood has turned into a cutting-edge, ephemeral scavenger hunt. On select night windows are simply lit up with GIF or video art, heavily curated group shows and solo works by local favorites. It's a game-changer for a time when emerging talent has risen to the surface, demanding the same attention as the more traditional gallery-repped circuit. Plus, it has made finding art a thrill while using the city's existing infrastructure. And by plopping it all in an area of heavy foot traffic, it has encouraged passersby to have unexpected interactions with beauty, merging the gallery scene, innovation and public art together.

From Ari Richter's The Skin I Live In, which utilized body cast-offs from humans and animals for sculptural purposes, to That Mortal Coil, the group show examining body beautiful through a jagged, kaleidoscopic group show, we've learned CentralTrak is content to be unpredictable, at times alarming and always informative. Isn't that precisely what you want from art? Moreover, isn't that what you'd hope would rise out of a "go do it" art incubator like CentralTrak? Of course it is. Still not convinced? They've had gallery shows for dogs, feminist porn night, time travel and hosted a pop-up art video game arcade. Were that not enough, CentralTrak's monthly "Next Topic" speaker series and panel discussions keep the important conversations whirling about, stirring ideas about both the art on display and the issues facing artists working in Dallas, right now.