One of the great things about living in Texas, when you can get past the crippling summertime heat, is the luxury of year-round patios. Own a bar in Dallas? You'd better have a patio. And with Deep Ellum's continued boom, you're never more than five steps away from a spot to sip a drink outdoors. One of the best is Twilite Lounge — and that's without even considering the live music that they host on the patio. Over the years, they've packed out the patio with the likes of Old 97's and Sam Outlaw, and most recently featured a rare live performance by Dividends, the electronic project of Sarah Jaffe and Grammy winning producer S1. Oh, and all Twilite's shows (patio or otherwise, in fact) cost zero dollars. The only drawback? You better show up early if you want to get in.

Best Concert That Should've Been Awful

From the minute that Guns N' Roses announced (most of) its classic lineup was getting back together, the joke was inevitable: "How long before they break up?" Which was followed quickly by, "They must need the money." In case you didn't know, Axl Rose and Slash don't like each other. Like, really don't like. They hadn't shared a stage in North Texas since 1992 before they landed at Jerryworld in August, and the tour had already started on the wrong foot when Rose broke his. But, in spite of a late start, there really wasn't much drama to be had with GNFNR — just a two-plus-hour romp through the band's biggest hits and occasional deeper cuts in all their sometimes-bloated and often fireworks-laced glory. Are Rose and Slash BFFs now? Probably not. But sometimes all you need is a little patience to make it work.

Least surprising fact of 2016: Erykah Badu knows how to throw a party. Ms. Fat Belly Bella herself has been celebrating her birthday in style for years now, but for her 45th birthday (yeah, hard for us to believe that too) the Queen Herself made sure to make it an extra special occasion. The Bomb Factory, which is starting to feel a bit like Badu's personal 4,000-people playground, was the obvious place to throw this gala, and Dave Chappelle was the perfect person to host it. Well, "host" was a bit of a loose term, as Chappelle came and went on his time, doing a brief bit of stand-up and a rendition of Radiohead's "Creep" that went viral when video surfaced months later. Pretty well everyone was there, too — even André 3000, who sadly never took the mic himself. The only real question is, how do you top that? The answer, of course, is only Badu knows.

Billy Gibbons at The Foundry 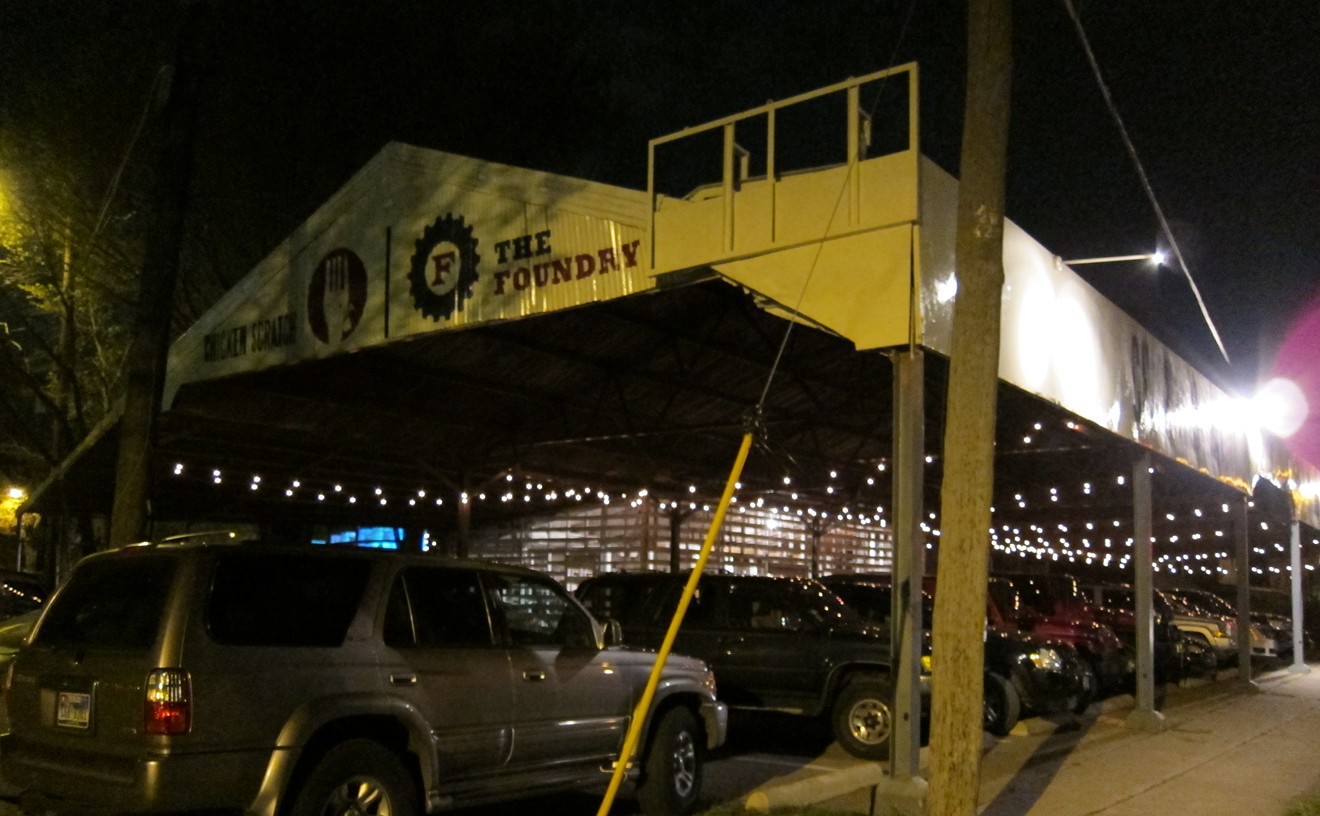 ZZ Top fans had reason to be disappointed this summer: The Rock and Roll Hall of Famers were supposed to play North Texas with Jimmy Buffet, a piña colada-fueled party. But alas, health issues forced the Houston-by-way-of-Dallas trio to drop out. Billy Gibbons, however, wound up hanging around Dallas anyway, popping into The Foundry for a friend's private birthday party. Lo and behold, Mr. Dark Sunglasses hopped onstage, too, jamming out with the Relatives on a rendition of his band's classic "La Grange." The magic moment might've been lost to the wider public if it hadn't been caught on video. Gibbons seemed to enjoy himself, too, popping up later that night for an after party at the nearby Belmont Hotel —but you actually had to be there for that one.

Remember last winter, when some still held out hope for a cranky old senator from Vermont? Those were the days. But for one North Texan in particular, Bernie Sanders' unlikely presidential bid made for a truly "One in a Million" experience: Jessie Frye. That's because the Denton goth-pop singer wound up receiving an even more unlikely endorsement from Sanders' campaign, which picked her to perform at not one but two of his rallies. Sanders himself wasn't present for the first, but the second — held at Verizon Theatre in front of 7,000 people — was the real deal, a warm-up for Sanders' address to his DFW faithful. Frye, whose song "One in a Million" had appealed to Sanders' local campaign staff, got offered the gig on 36 hours notice and enlisted the help of the Vandoliers' Dustin Fleming to get Sanders' supporters riled up. Feel the Bern, indeed.

Less than two years into his life as a major-label artist, Leon Bridges is almost running out of milestones to hit. He's toured the world, played every major late-night TV show, been in commercials, was nominated for a Grammy award and even shared the stage with not one but two Beatles (which makes for all the living members of the Fab Four). So it's probably been getting harder and harder for the Fort Worth phenom to find things to check off his bucket list (and no, jumping on a track with Macklemore probably doesn't count). But out of all the dream-worthy moments Bridges has had, one made his mother proudest: meeting President Barack Obama. Obama's a fan, of course — he included "Smooth Sailin'" on his summer mixtape — and during a Ray Charles tribute at the White House, he told Bridges as much. "I see you," Bridges later remembered the president saying. "An upcoming Texas soul star."

The music industry can be a notorious boys club, and that may never have been truer than in the case of hip-hop, a most hyper-masculine, misogynistic of genres. What the rap game and greater music world in general needs more of is people like Sam Lao, but for a while there, about two and a half years or so, there was reason to worry that she wouldn't fully capitalize on her considerable talents. That's how long it took for the follow-up to her debut EP, West Pantego, to come together, but from that troubled conception sprang the best album to come out of Dallas this year: SPCTRM. Smart, sassy and dripping with charisma, SPCTRM is Lao incarnate as she switches with ease between siren singer and best-rapper-in-Dallas roles on cuts like the middle-finger-to-the-haters "Fool's Gold" or body empowerment manifesto "Pineapple." But she never needs to make a statement on SPCTRM; all you need to know is that this is Sam Lao, and the boys have to play by her rules.

It's the epitome of the American Dream: putting Justin Bieber in a chokehold. It's apt, then, that Post Malone would get to do just that this year — because, well, the Grapevine native has really been living the dream. Plucked out of obscurity in 2015 when a Soundcloud recording of "White Iverson" went viral and landed him a label deal with Republic Records, Malone, who's based out of L.A. these days, had been touring almost nonstop. First it was with Fetty Wap, but then he really hit the big time when Bieber invited him on the mega-sized Purpose Tour. No wonder he turned down a spot on XXL's Freshmen Class. Malone and Bieber are BFFs, which is why they insisted that an incident at a Houston club — when the Biebs put out his cigarette on Malone's arm, which prompted Malone to put him in a chokehold — was all in good fun. Still, wouldn't you have wanted to be in Posty's shoes?

Anthony Gonzalez, the Frenchman who fronts the '80s-tinged synth-pop powerhouse M83, was thoroughly won over by Denton singer Kaela Sinclair's audition tape. Gonzalez had put out a call on Twitter asking for female applicants to tour with M83 on this year's Junk Tour, after the band had parted ways with its former keyboardist and backup singer. Sinclair, fresh off winning the Best Keyboardist award at the Dallas Observer Music Awards, took a chance and submitted a video. A few weeks later, she got a call from Gonzalez himself offering her the gig, and she's been living in a dream world ever since. Tour stops around the world, including one headlining The Bomb Factory, TV appearances, the works; it's time to hurry up, because Sinclair ain't dreaming, even if she might have to pinch herself sometimes.

In the annals of North Texas post-rock, names and albums don't get more mythic than the Texas-Jerusalem Crossroads. For the past 15 years, that stellar double album, was all that Lift to Experience's fans had to hold onto, constituting the Denton band's entire body of recorded work before they broke up in 2002. So it was with considerable fanfare that news of LTE's reunion broke last spring, even if the initial word pertained only to a one-off show in London. It didn't take long, though, for Josh T. Pearson and the gang to get the feel for those heady, noise-fueled days, and they added some Texas dates to the agenda, including a stop at Rubber Gloves. For a band that knows how to spin epic tales, the timing couldn't have been more perfect; as pure coincidence it proved the last-ever show for the Denton club, where Pearson had once helped build the patio.