Behind the Big Thicket at White Rock Lake

Let's face it: Good swing sets are few and far between. Some of them are too low to the ground; others have those painful ridges on the sides of the seats. Some of them are directly in the sun, which renders the chains and rubber seat scalding. When you find a good swing set, by god you hold onto it for dear life. Like a very special pair of swings at White Rock Lake, which hit nearly every criteria for an ideal swing set experience. Located behind the historic Big Thicket building, the swings are suspended by extra-long chains and are perched atop a slight hill overlooking the docks, the White Rock Lake trail and the water. There are multiple seats, and they're all nice and wide. They're shaded year-round by a canopy of old oak trees. They are a bit loud, however. The chains seem to echo throughout the small park, but it might add a touch of nostalgia, or perhaps authenticity, to the experience. Even the best swings have things they're working through, just like each and every one of us. 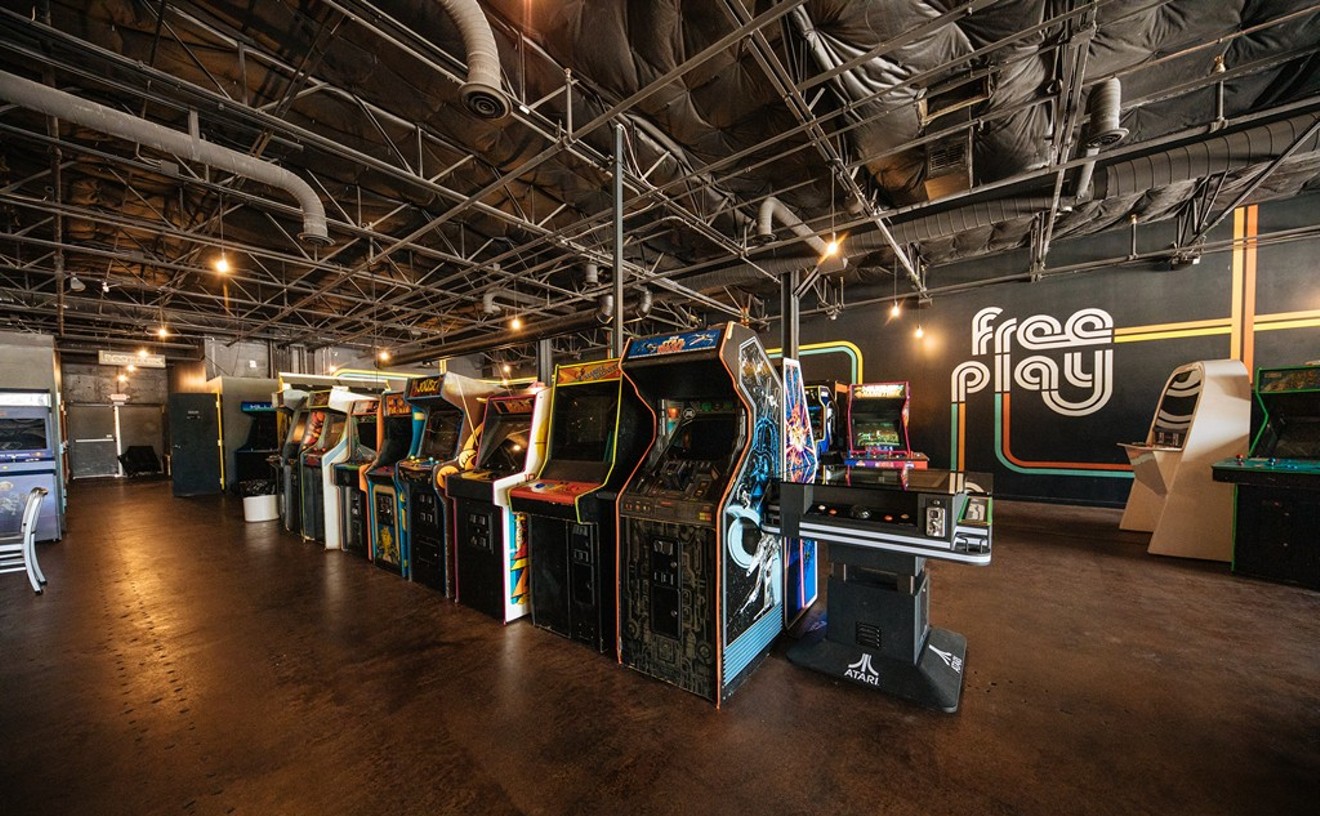 The Dallas-Fort Worth area has become an interesting hub for new gaming technology, but the thrill of going to an old-fashioned video game arcade that doesn't require a wearable computer will never stop being fun. Free Play Richardson, the launch site of the Free Play retro arcade empire, continues to find ways to maximize its tiny space with neon-pink '80s ambience, the best new and classic arcade games and even some games that no other arcade has ever had under its roof. This past year, the Richardson arcade hosted some of the most fun gaming events in the area. The arcade became one of the first places in the world to get a full-size Atari Pong Cocktail Table that used physical foam pieces floating across a magnetically controlled surface instead of pixels. Free Play Richardson's success has ushered in a new modern arcade movement just when we thought going out of your home to play games was dead.

Board games have made one of the greatest comebacks as a medium for entertainment. It seems like we went from just having Operation and Monopoly to a whole new generation of challenging puzzle, party, strategy, role-playing and card games. The @nerdvana coffee shop and board game store that's also part of the video game-themed restaurant and bar on Frisco's downtown square has given the board-gaming crowd such an awesome place that our only complaint is that we have to go all the way to Frisco to enjoy it. Every inch of the space has been decorated with some kind of gaming paraphernalia or decoration, from the walls to the glass-covered display tables that celebrate genres of gaming like "Star Wars" or the dice-rolling RPG. The board game store's collection is a bit smaller than your average gaming store, but the selection contains the cream of the modern board-gaming crop from modern-day publishing powerhouses like Cryptozoic and North Star Games. And if you just don't have the dough to get one, there is a massive selection of public board games for customers to play while they suck down a tasty iced coffee or a delicious frozen chocolate. If there's a board-game heaven, this is a pretty good artist's rendering.

Beginning with November's state constitutional amendment election, Dallas County voters will be able to vote at any voting location in the county, regardless of when he or she chooses to vote. The decision is good news for those who work far from their homes, those who wait until election day to cast ballots and those who support wider access to the ballot box.

Filmmaker Augustine Frizzell got her start as a costume designer and actress, frequently collaborating with now husband David Lowery (A Ghost Story, Pete's Dragon). But in only two years since she broke out with her debut film, Never Goin' Back, an honest (albeit exaggeratedly comedic) depiction of suburban broke female teenage-hood, Frizzell seems to have actually never gone back. Her technical and expert eye for nuance skyrocketed her into a nonstop level of high demand; Frizzell has since directed episodes for HBO's hit show Euphoria and Starz' Sweetbitter as she continues to line up big-name projects. The Garland native and Lakewood resident also employs many locals, carving a place into silver-screened history for her Dallas crew.

Times are so tense. We wear our politics on our sleeves like badges. It's become an us vs. them culture where any sense of a middle ground has exploded into a fine powder and blown away with a hard, hot wind. This not only ensures that we won't get much of anything done, but it's perfect for people who aim to make us look foolish. Enter street artist Eric Mancini of Denton, who's been publicly expressing our collective disdain with public works of art like his "Trump dumpsters," in which he posted our president's mug on the entire front of garbage dumpsters; witty Facebook responses to critics placed in frames; and his signature spray-paint squiggle rendered on canvases, walls and an entire home in Bishop Arts. His public presentations took a satirical turn on April 1 with a gutsy installation in which the people who saw it became his muse and medium. Mancini made up two banners announcing the opening for a Trump-brand hotel, and in the middle of the night, he hung them to the chain-link fence surrounding an empty plot of land on Lamar Avenue that he later learned was owned by Mavs owner Mark Cuban. The sign actually stayed up for a few weeks and was taken down just after someone made their own artistic mark on it that made it look, shall we say, more profane than the idea of Trump opening a hotel in Dallas, before Mancini took credit for it on his Facebook page. Sadly, Mancini has since moved out of state, but we hope he's wreaking havoc in another city.

Can You Rob the Bank

Located in a clandestine spot near Lower Greenville, Can You Rob the Bank is one of Dallas' most exciting indoor thrills. Up to 10 participants at a time can rob a fictional bank in a Wild West, space alien or superhero setting. Each team is given an hour to "rob the bank" and escape without getting caught and arrested. Members of each team will be given clues and riddles to solve, and with each correct answer, they unlock a door that leads them closer to their escape. Plus, Can You Rob the Bank is owned by bad-ass single mother Jill Brandenburg, who is also a breast cancer survivor.

QuakeCon is one of the video game industry's oldest game gatherings. The first QuakeCon, the now-annual gaming convention that celebrates game franchises like "Wolfenstein," "Quake" and "Rage" — made by local studios such as id Software and Bethesda Softworks — happened in Garland in a hotel meeting room with only 50 people in attendance. This year's gathering at the much larger Gaylord Texan Convention Center in Grapevine had a special reason to celebrate. It marked the 25th anniversary of "DOOM," the bloody, highly stylized first-person shooter that became a gaming phenomenon and made id Software a major player in the video game industry. Naturally, QuakeCon 2019 was also dubbed "DOOMCon," featuring the first playable preview of the next game in the franchise, "DOOM Eternal," and other new games that players could try by making a demo reservation instead of waiting in ludicrously long lines. The weekend also featured a record-setting speed run that completed every "DOOM" game from every era, including "DOOM 64" for the Nintendo 64 console and the upcoming "Eternal."

So you think you have "it" but you're not sure what "it" is? Learn acting for stage, screen and TV (at affordable prices) at S.T.A.G.E. (Society for Theatrical Artists' Guidance and Enhancement). With the help of local showbiz pros, including longtime director and education coordinator LisaAnne Haram, prepare for call-backs, learn to do make-up, get the secrets of voiceovers and more. The organization also supports local playwrights with readings and rehearsal space, plus there's a big library of plays to dip into. Founded in 1982, S.T.A.G.E. has put lots of working actors on the stage.

Best Place to Socialize With Your Dog

One of the few problems with most dog parks is the fact that dogs of all sizes are fenced in together, leaving terriers and Dachshunds to cower in a corner while mastiffs and great danes lope around the pen as they please. NorthBark Dog Park solves this problem by having two separate play areas — one for big dogs and another for smaller ones. Your Pomeranian can run, chase and snuffle around without having to worry about getting stomped on by a German Shepherd. The park also has a swimming hole where dogs can wade and paddle and a cleaning area where you can hose down your pup before you head home.