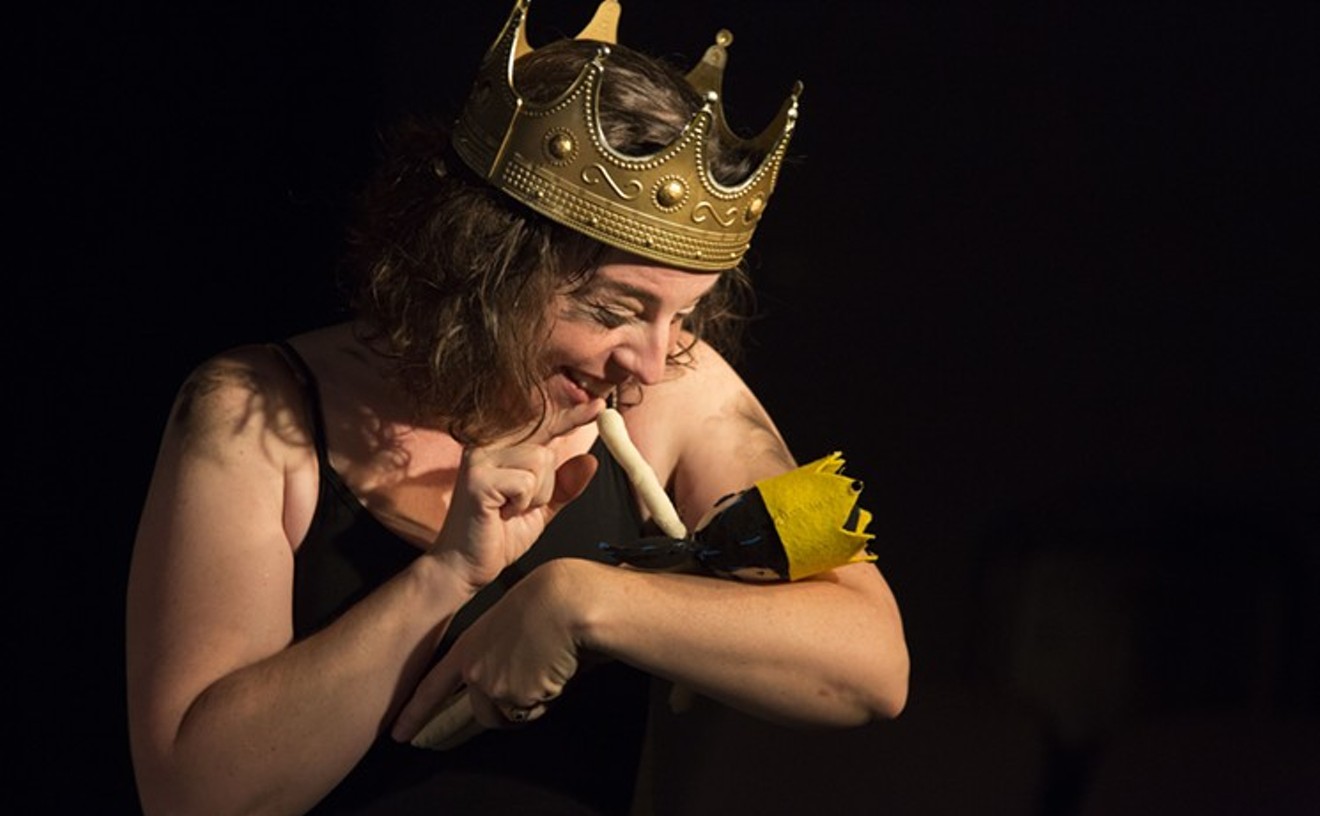 Prism Movement Theater was founded by Jeff Colangelo, a fight choreographer with an exceptional aptitude for miming, and Katy Tye, an acrobat and dancer. That explains the "movement" portion of the theater company's name. Before a surge of endless drive-in attractions popped up mid-pandemic (we're hoping that was the "mid" part), Prism set up an "immersive performance experience" in DFW parking lots. Everything Will Be Fine, created by Colangelo and Kwame Lilly and written by Zoë Kerr, uses the pandemic setting to the utmost advantage. The show tells the love story of two face-masked characters through a graceful interpretative dance and a clever use of car lights. The plot and choreography are equally moving, and make for an entertaining display of art which proves that if performers can expend boundless energy through complicated dance moves — in the Texas summer — while wearing a mask, you'll survive wearing one for five minutes while in line at CVS. 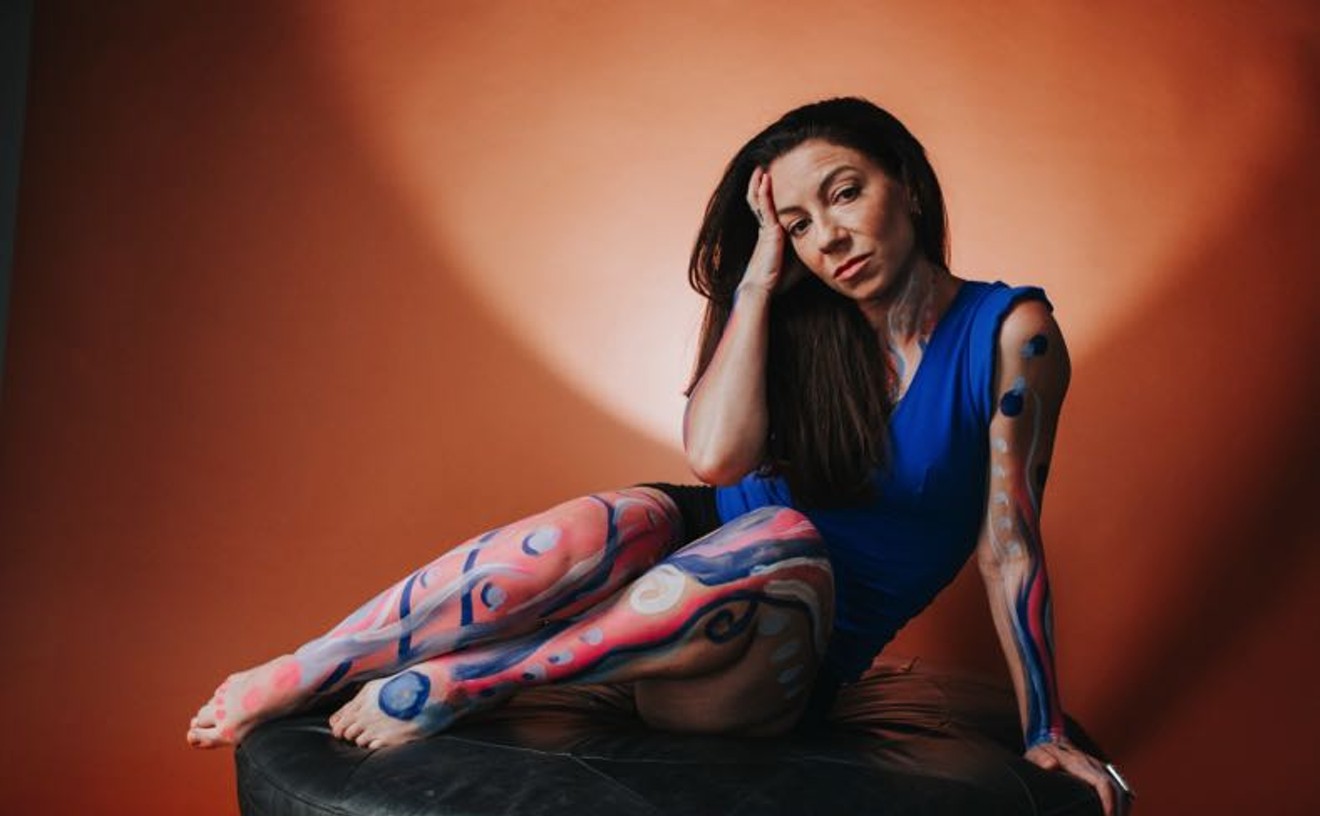 Dallas has its share of superb performance artists, but few are as culturally involved and socially conscious as Kristin Colaneri. The skilled makeup artist is best known for taking a Cindy Sherman turn into the art of transformation by frequently incorporating herself, made up into different characters, into her art. An educator with degrees in theater and film, Colaneri inhabits a fascinating fantasy world but steps out of it long enough to make audiences feel the pain of segregation. Her newest work, called B&W, is a poignant bit of performance art in which Colaneri and fellow performance artist Kwame Lily pose in front of City Hall as intertwined "human sculptures," body-painted with messages like "BLM." Their aim is to intersect art and protest through improvisation in a display of quiet resistance. As a relentless advocate for the local arts, Colaneri wants Dallas to focus on its artistic rather than commercial growth. No matter the medium, she has maintained a steady point of view calling for a globalized unity through a celebration of multi-cultural perspectives.

Until recently, Confetti Eddie's Magic Parlor sat in South Dallas, next to Ochre House Theater and Eight Bells Alehouse. Its presence was unmissable, as the parlor's door was guarded by a giant, but friendly, dinosaur statue. Confetti Eddie and his dinosaur have since packed their bags of tricks and left the space, though they've yet to announce a new address. While the magician and his act evoke a nostalgic vaudeville aesthetic, his dinosaur was undoubtedly modern and health conscious, too. Dino was spotted throughout the pandemic wearing a custom-sized face mask, setting a sound example and proving his status as a Dallas icon — not just of the neighborhood, but of his new era.

Bar trivia has become a distant memory thanks to the coronavirus outbreak even as companies tried to replicate the concept online. Pop culture raconteur and Dallas fan convention emcee Devin Pike decided to do something much different and more fun with his Bacon Samurai Productions empire. His weekly pop culture altar called Universal Remote is a live, interactive game show that anyone who's watching can play. Pike's game show creation is based on MTV's comedy game show staple Remote Control and brings it to our digitized age. The categories are "channels" that run the gamut of retro and modern pop culture trivia from single film and show-focused topics like Twin Peaks and What We Do in the Shadows to unique categories like "Ride or Die" about famous TV and movie cars. He's also used his con and celebrity connections to score fan-favorite guests to host their own quiz channels like Sleepaway Camp's Felissa Rose and actor Keith Coogan, best known for his role in '80s and '90s movie staples like Adventures in Babysitting and Toy Soldiers.

We're not proud of this news, but Dallas became the Karen capital of America this year, in one weekend no less, when several misbehaving COVID hoaxers, racists and other specimens displaying various degrees of entitlement became subjects of ridicule on the internet. Topping the list were Fiesta Karen, who threw her shopping items dramatically across the supermarket's floor when she was denied service for refusing to wear a mask, and the MAGA Bonnie and Clyde who "protected" their St. Louis home from protesters by pointing guns mostly at themselves (yes, sadly we have to claim them, since they met at Southern Methodist University). But one woman took the cheesecake after a tweet by her husband went viral for its tone-deafness. Doghouse-dwelling husband Jason Vicknair tweeted a photo of his wife, a sad snapshot of a distressed woman who sat depressed at Mi Cocina in Allen waiting for shredded cheese for her fajitas. The shredded cheese never came. She was forsaken. She'd been waiting 18 whole minutes, he wrote, and the pandemic was just no excuse for poor service. Fajita Wife became a viral sensation overnight as commenters rejoiced in sarcastic sympathy for the couple's first-world problems. The meme reminded us that no amount of death, uncertainty and unemployment could stop Americans from appreciating — and complaining about — the little things.

In his bimonthly livestream, 40 Acre Mule keyboardist Chad Stockslager pulled out every trick in his seemingly bottomless sleeves to entertain his audiences virtually. A North Texas University alum and music teacher, Stockslager engaged thousands of viewers through a surrealist hodgepodge including his piano playing, comedy bits, an uninterrupted 10-plus-minute scene of Stockslager romantically admiring his record collection and story time — in which he recounted random "fond memories" of life — all interjected with poetry, music videos, dream sequences and comfortably awkward dancing. Stockslager's series was so influential it inspired the CarBaret Variety Drive-In in Richardson, a popular film and music series that's now taken to the road. But most of all, the musician became the one person we'd choose to be stuck with in quarantine. 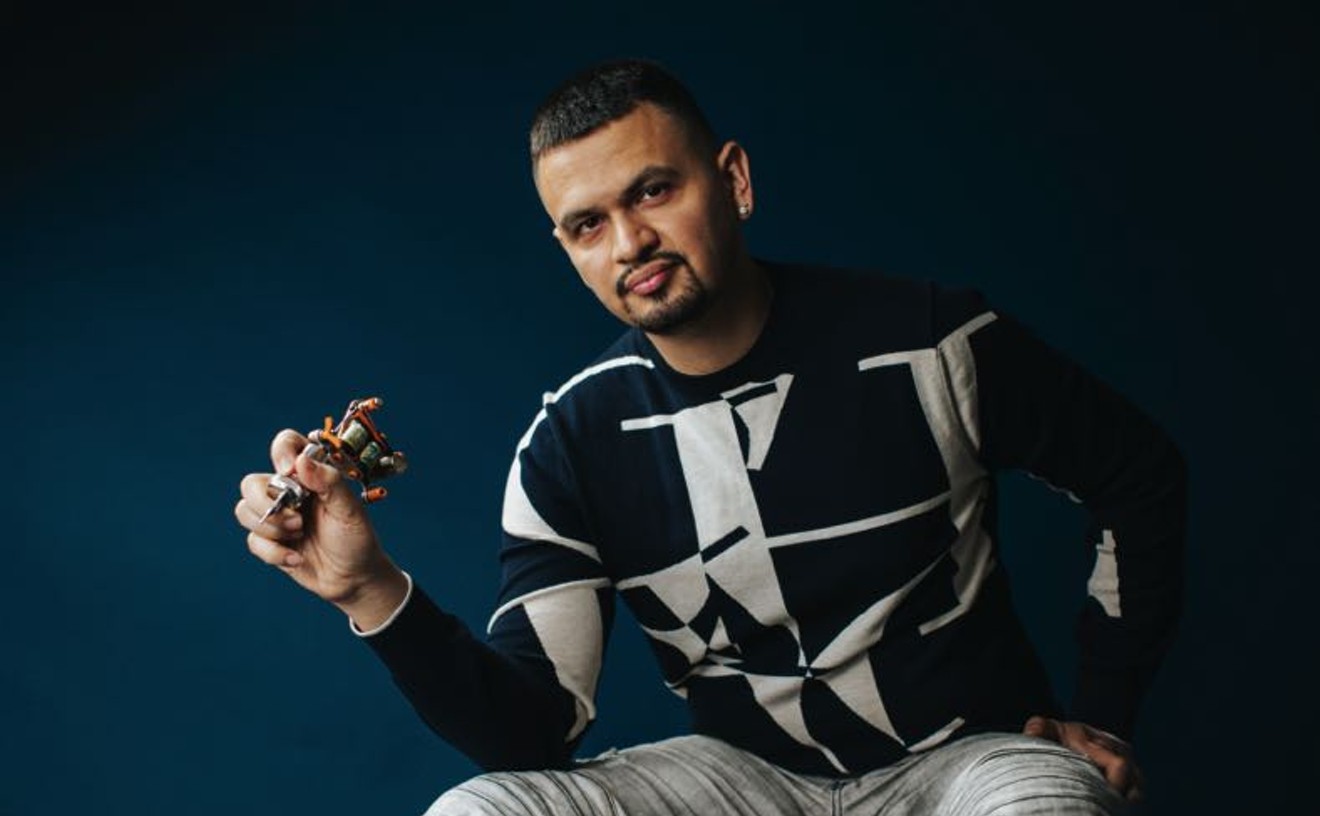 While we love the retro appeal of traditional tattoos, Francisco "Frank" Sanchez's work makes us want to leave our anchor tattoos at the bottom of the ocean and in the past. The tattoo artist's hyper-realistic work would've impressed Renaissance masters. One of the artist's recent commissions depicting a biblical scene is so splendid it will have you running to convert to a life of piety. Sanchez is a skilled painter, too, and his artistry is evident. His multi-detailed skin art has so much depth it looks like the kind of 3D you'd pay to watch at an IMAX theater. Sanchez works by appointment only and specializes in color realism, black and white, and portrait tattoos. Sanchez also does custom tattoos and manages to make even the cheesiest of pet photos look tasteful. 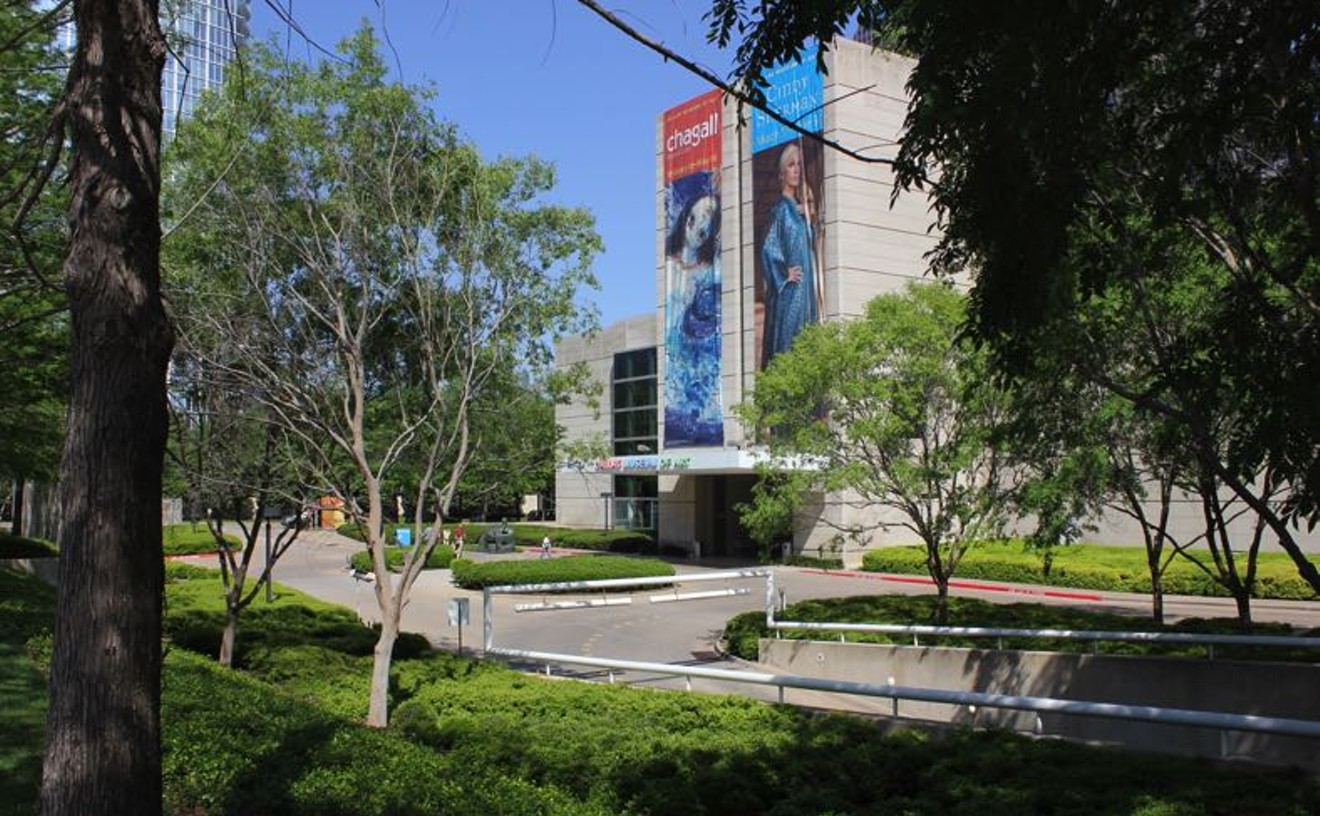 Picking a best museum is a little tricky in the coronavirus pandemic; some have decided to temporarily shutter while others remain open with stringent safety guidelines. The Dallas Museum of Art is exercising both caution and innovation by paring down its visiting hours and offering phenomenal online exhibits. Homebodies can embark on a virtual tour of a DMA collection with works ranging from modern sculptures to classic European art. Adventurers should check out its Dallas: Art Outdoors compilation, where you can explore 13 public works including sculptures, murals and memorials.

Tweeting out a whole book isn't anything new; Michaela Coel's I May Destroy You character earned her fame after releasing her book on Twitter, and just recently, North Texas-born Kassie Shanafelt released a book of poems in reverse chronological order through the social media platform. The Accommodation: The Politics of Race in an American City by author and former longtime Observer columnist Jim Schutze, has long been out of print since it was first published in 1986. But in June, someone decided to type out all 199 pages of the book and tweet it out — sentence by sentence, by the hour. The book details the history of race relations in Dallas, recounting a series of racially motivated bombings against Black households in the 1950s. Rare copies of the book can be found on Amazon (for $1,000, plus $3.99 for shipping). As Black Lives Matter protests flooded the city, and the world, some Robin Hood of literature decided to spread this wealth of knowledge by allowing Twitter users access to this treasured bit of info for free, 280 characters at a time. It's not a pleasant way to read, but it's worth it.

Charles Rogers is the co-creator of HBO's Search Party, a dark comedy that starts off as a mystery about a group of friends searching for a lost companion and evolves by its third season into a satire about crime and a parody of millennial narcissism. Rogers is the sole creator of his Instagram content, however, and his account, under the handle @Gcharlesrogers, is just as enthralling. Rogers, who was born in Dallas and grew up in Brownsville, uses his Photoshop powers in a showing of unparalleled weirdness. The treasures found in Rogers' posts include photos of himself altered into the likeness of a human-fleshed horse — in a suggested ménage à trois with himself; shower photos of his naked backside transformed into a generous hourglass shape; or eating oysters naked in a cage. Call it surrealism or highly confusing erotica — we don't know what we're looking at, but we're too powerless to turn our eyes away.