The Trinity Forest Trail is one of the most beautiful we have in the entire city. It's fine for running, but it feels much safer on a bike. It's flat, much like the rest of Dallas, so don't plan on getting a huge quad workout, but do take a ride to experience the overwhelming beauty that is the Great Trinity Forest. There's no loop, but going back and forth allows you to take in different perspectives of the landscape. Enter at the small entrance near 4608 TX-12 Loop (west of the Audubon) to get as much mileage as possible, connecting to the AT&T Trail, which will show off Dallas' best boondoggles (the golf course and horse park).

This is a wonderful spot because you can get lost for a while in its 121 acres, forgetting you're in Dallas as you wind up and down through both prairie and dense trees. You can spend hours on these trails, and they're actually worthy of putting on higher boots instead of regular sneakers. 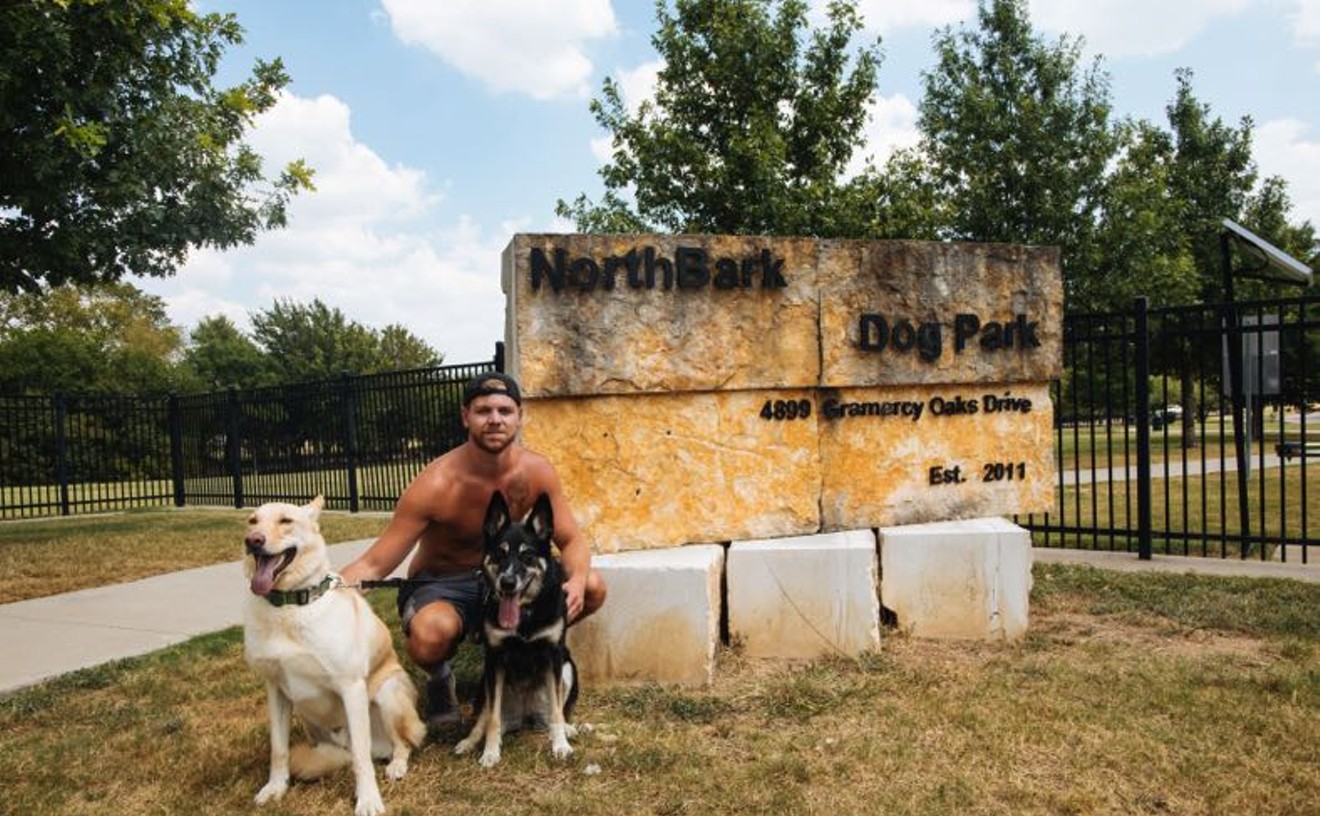 Far North Dallas has a spacious dog park that's nearly worth the drive if you live in the city center. NorthBark has 22 acres for your pups to roam off leash among a lake, trails, a pavilion and showers. It's even the largest of its kind in North Texas.

Time is cruel, and no matter how much joy an athlete has brought fans over the year, eventually they must hang up their jersey and head off to ... Las Vegas? After 16 seasons with the Cowboys, not counting a year off spent in a TV booth that's best forgotten, Whitten left the Pokes a second time to sign on with the Las Vegas Raiders. In Dallas, he racked up 1,215 receptions and 12,977 yards receiving, the second most of any tight end in NFL history. Beyond the stats were countless clutch plays by the big man — he's 6'6" — who was a favored target in do-or-die moments. A legendarily tough player, Witten played through a broken jaw in his rookie season in 2003, when he was named to the NFL All-Rookie Team. He missed one game then, and went on to start in 245 games for Dallas. At 38, he may have lost a step on the field, but he still shines in fans' hearts.

When the time comes for Cowboys quarterback Dak Prescott to retire, he should consider professional poker as a new career. (We hear Las Vegas is welcoming.) The man obviously knows when to hold 'em and knows when to fold 'em. Negotiations over a contract extension between the team and Prescott dragged on throughout the offseason, with talks stalling partly over whether Prescott would take the team's five-year offer or hold out for the four-year deal he wanted. As a July 15 contract deadline neared, Prescott held pat, causing the team to place an exclusive franchise tag on its star and pay him $31.4 million for the current season. Contract talks have been pushed on down the road. Meanwhile, top quarterbacks are signing ever larger deals and an expanded salary cap in the future means Prescott could be in line for a bigger payoff, assuming he plays up to snuff this season. Some sports columnists say the team erred by not reaching a long-term deal for a player it obviously didn't want to lose, essentially wasting the franchise tag money. We should know better whether they're right sometime about the end of December.

In August, longtime sports radio talk show host Norm Hitzges revealed he was being treated for bladder cancer, prompting an outpouring of support from sports fans who follow The Texas Radio Hall of Fame member on 96.7 FM/1310 AM The Ticket. Hitzges, 76, broke the news on Norm and D Invasion, the show he co-hosts with Donovan Lewis. Like the players he covers, Hitzges wasn't going to let his body keep him from the field, and he told listeners he intends to keep working as he undergoes treatment. More good news for fans: The five-year survival rate for all stages of bladder cancer is 77%, according to the National Cancer Institute, rising to 96 percent in cases where the disease hasn't spread.

As in Luka Doncic, the Mavericks guard who is quickly running out of "first" and "youngest" accolades to win. In just his second season, the Slovenian star was named first-team All-NBA, becoming the third Maverick to be named to one of the three All-NBA teams. (Dirk Nowitzki and Steve Nash are the other two, natch.) At 21, he is the youngest player to start an All-Star Game since LeBron James in 2005, and the youngest player to lead the NBA in triple-doubles, The Dallas Morning News reported. Even grander, he's filled the large Dirk-shaped hole in the hearts of Mavs supporters and has given North Texans a reason to learn where Slovenia is on a map. Despite what you might have read, he is not the son of D Magazine's senior editor and rabid Mavs fan Zac Crain, though at this rate don't be surprised if there are a few baby Luka's bouncing on the knees of season ticket holders in the years to come.

Sure, it was a pandemic-shortened season played without live fans, but a win is, as they say, a win: For the first time in 20 years, the Dallas Stars made it to the final round in the Stanley Cup playoffs, which the team has won only once, in 1999. Dallas will face Tampa Bay from the Eastern Conference, two cities known for their winter sports. We're going to take a chance here and make a prediction: The Stars win in the sixth overtime of Game 7 in Edmonton. (To be honest, we know less than dick about hockey, but we know what makes this burg happy, so let's be happy. It'll be a change for 2020.)

BEST REASON TO LOOK FORWARD TO 2021

Seeing any live sports next year, or attending a concert, would be welcome, but the COVID-19 shutdown has been especially hard on baseball fans. People who will stay up until the wee hours to catch Korean baseball show a level of devotion usually reserved for heroin addicts. So, it was particularly harsh that Texas Rangers fans missed out on their first season of watching their team live in air-conditioned comfort because of the pandemic. But baseball fans are nothing if not patient — they have to be — so we know they'll be able to hold out at least a few more months to take a seat inside Arlington's newest $1.2 billion sports palace. And yes, we know that some fans might be able to get inside the stadium for a game before then because it was just named the neutral host site for the 2020 pandemic World Series. But they won't be watching the Rangers come October, which is more than harsh. It's cruel. It's like the Rangers are a father paying for a lavish wedding for someone else's daughter. Here's hoping that the seats are full from next year's home opener all the way until October 2021. 0x000A