Uptown's Bar Scene Is a Problem, City Officials Say, and Something Has to Change

Beth Rankin
At a Quality of Life Committee briefing Monday, several Dallas City Council members voted against bringing a late-hours overlay to a vote before the full council. But this battle isn't over, city officials say.
Since Aug. 8, 2016, the city of Dallas has been considering a zoning tool called a late-hours overlay. If enacted, it would allow the city to require any business that wants to operate between midnight and 6 a.m. in certain areas — in this case, Uptown — to apply for a special permit. The theoretical overlay would apply to bars and restaurants but also hotels and retail businesses like gas stations and convenience stores.

Since the zoning tool was first proposed, the Dallas bar and restaurant community has been fighting back hard with social media campaigns and large turnouts at meetings and votes on the overlay. Two city committees — the Zoning Ordinance Advisory Committee and the City Plan Commission — voted against enacting the overlay. Still, the issue went up for a vote Monday morning during a City Council Quality of Life Committee briefing.

In the end, the committee voted to drop the late-hours overlay.  If the committee had voted to continue, the issue likely would have faced a full City Council vote.

In response, Stop the Curfew — a coalition of local service industry folk led by Randall White, whose communications firm represents the Greater Dallas Restaurant Association — posted on Facebook that, "Our work here is done."

Not quite. City Council members — particularly Philip Kingston, whose district includes Uptown — have been clear that neighborhood residents' complaints about large crowds of unruly drunks and "bad actor" bars won't be ignored. The few Uptown residents who have spoken in support of the overlay at meetings share stories of drunken brawls in the street, drinkers urinating in yards, little parking with no enforcement, and excessive noise from customers and the bars.

Signs posted this weekend at bars around Uptown, including Grapevine in Oak Lawn, urged customers to email District 12 council member Sandy Greyson to oppose the city's proposed late-hours overlay. The signs used the logo of Uptown Dallas without the nonprofit's permission. Uptown Dallas was not involved in creating or posting the signs, a spokesperson says.
Beth Rankin
“Probably a thousand” Uptown residents are in favor of regulations that would limit late-night operations for bars along McKinney Avenue, Kingston said. Kingston also claims that most of Uptown's raucous late-night drinkers don't live in Uptown or even Dallas proper, and that Dallas Police Department's Lonzo Anderson, deputy chief of the Central Patrol Division, has declared that Uptown is in a “state of emergency” in regard to nightlife-related crime. (We reached out to Anderson to confirm this, but he has not responded.)

At times during Monday's meeting, council members scolded Stop the Curfew for the way it has lobbied against the overlay. District 9 Councilman Mark Clayton accused the group of "bullying" council members.

"They painted it like it’s some backroom deal," Clayton said. "By the way, that’s the most bush league I’ve seen an industry website operate, and you should be ashamed of yourself." 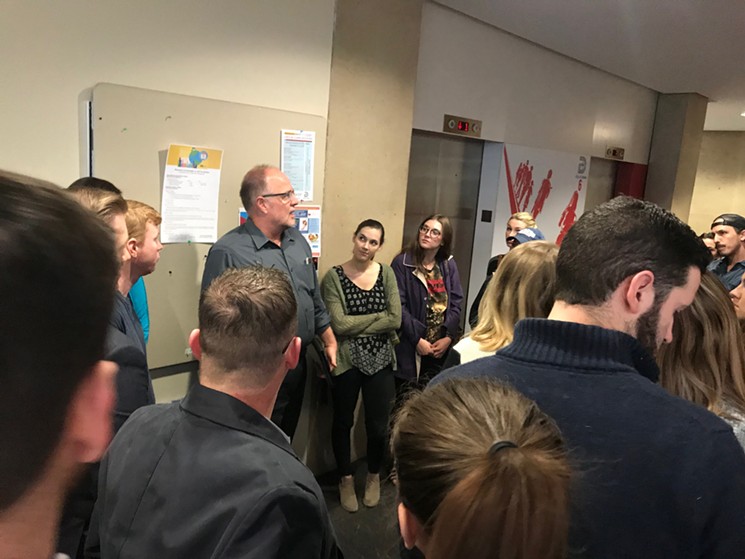 Randall White (center-left) spoke to service industry workers who are against the late-hours overlay after Monday morning's meeting. "There's gonna be a self-regulating body that’s not part of the city and that’s gonna take care of the bad actors," he promised.
Beth Rankin
Just before unanimously voting against continuing with the overlay, the committee suggested that if the bar and restaurant industry doesn't want to see it return, venues need to organize and self-regulate to deal with the problems that large crowds of drunks are causing in Uptown, particularly along the bar-heavy stretch of McKinney. After the meeting, White told the group of service industry owners and workers at the meeting that Stop the Curfew has a plan.

"We're working up an alternative self-regulation," White said. "We have also heard that it’s a laugh and it won’t work, but we’ll find out. There's gonna be a self-regulating body that’s not part of the city and that’s gonna take care of the bad actors."

A new group called Uptown Congress formed in late September. According to its website and social media, the group "believes we can establish a safe, vibrant and positive nighttime culture for Dallas businesses, residents and guests."

No matter what, Kingston says, McKinney Avenue in Uptown is a problem, and it won't be ignored. The neighborhood "doesn't deserve what it’s being put through at this point," he said. "We’re gonna do something about it one way or another."