Amy Miller had prepared herself to hear a lot of county music when she moved to Dallas to accept a job as program director at KXT-FM 91.7. Miller is originally from the West Coast, but she’s worked at radio stations in California, Virginia, Pennsylvania and now Texas. When she got here from Philly and began exploring music venues in Deep Ellum and Fort Worth, she was pleasantly surprised by what she heard. She says Philly’s music scene is “grittier” than Dallas’, with “a lot of indie rock bands, a lot of garage and basement bands” and good hip-hop. But Dallas has all of that, too, and she’s found it to be more diverse.

“You get the indie rock bands. You get the great hip-hop artists, and then you get the country and the Americana and the folk artists,” Miller says. Some of her favorite local bands are Omicron J Trauma, a new indie rock band (“They don't have a lot of songs yet, but I just think that they're great songwriters and a fun band,” she says); Dallas Observer Music Awards best jazz act nominee Ashleigh Smith; best female vocalist nominee Jude Gonzalez of Reinventing Jude (“She kind of reminds me of Feist,” Miller says); Sterling Masters; and best jazz act nominee Skinny Cooks.

"I went probably my first week or two of living here, and it was such a cool idea. I recently learned it's now even an international thing." – Amy Miller on Denton's Rock Lottery

Miller says since she has been here, the local music scene keeps getting “better and better.” There are more venues and independent spaces for bands to play, and she sees the Dallas music scene becoming more collaborative. One of the first music events she attended in DFW was Denton’s annual Rock Lottery at Dan’s Silverleaf, where musicians are placed in a new band in the morning and have to write and perform original songs that evening. She had never seen anything like that anywhere else in her travels. “I thought it was just amazing. I mean, I went probably my first week or two of living here, and it was such a cool idea,” she says. “I recently learned it's now even an international thing. People do it in other cities around the country, but also around the world, and it all started in Denton.” Miller thinks more people are starting to take Dallas seriously as a music city, especially as other cities with that reputation, such as Austin, Nashville, New York and Los Angeles, become increasingly saturated with bands.

“Musicians can move here, and they're not one of 10,000 bands trying to make it,” she says. “But at the same time, we have UNT in Denton, which is producing so many amazing musicians, and there's a ton of great recording studios here.” “And they can actually afford to live here,” chimes in DOMAs judge and fellow KXT host Gini Mascorro, who grew up in Fort Worth with George Gimarc and got into radio while in college at the University of North Texas.
Both women agree that it's also a great help to the area's music scene when local artists such as Kelly Clarkson and Leon Bridges break out and make it big. Although neither had a huge local following before attaining superstardom — Bridges by being plucked by a Columbia Records executive and Clarkson by winning American Idol — the radio hosts say it still causes people to turn their ears toward Dallas. “I think any time that an artist breaks out of a city or a town that might not be a stereotypical music town, it makes the rest of the country look at the scene a little closer and say, ‘Hey, maybe there is some talent there. What's going on there?’” Miller says. KXT has always played at least one local song every hour, Miller says, but in its eighth year as a station, it has deepened its commitment to playing local music. This fall, Miller launched an all-local show that airs at 7 p.m. Thursdays. 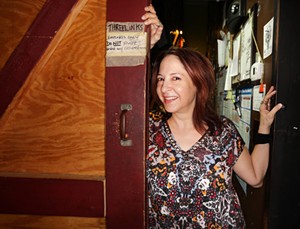 Gini Mascorro
Jason Janik
This year, KXT also declared October to be Local Music Month, which meant the station played even more local music. Labels and promoters gunning for airplay frequently send KXT albums, but Mascorro and Miller say they also take submissions from local musicians seriously. “We listen to every local submission we get,” Miller says.
Mascorro runs a meeting every week where the group will listen to some music together. She says Garrett Owen (up for four DOMAs) and the Texas Gentlemen (up for for five) have made the strongest impressions on her this year.

“I sent a couple of people outside of the area [Garrett Owen’s] CD, and they're just kind of blown away by how he's so young but he's an old soul, and you can tell that in his lyrics,” Mascorro says. She also loves Texas Gentlemen’s debut album, TX Jelly, released in September. “They’re Dallas’ very own version of the Wrecking Crew,” she says. Miller says she hopes Dallas' jazz scene develops more infrastructure in the next few years. There’s already lots of jazz talent, and she’d like to see more touring acts come through.

“I’d love to see it grown even more and the rest of the country kind of look to us for that since there’s so much talent here,” she says. Despite the wealth of jazz musicians in Dallas, there are few dedicated jazz venues. Even the Balcony Club above Lakewood Theatre, at one time known as a jazz venue, now books other genres many nights a week. “It kind of seems like the shows are kind of just scattered among venues and art galleries,” Miller says. “The ones that I discover are not necessarily at jazz venues, but one-off shows at event spaces.”

She says the best bet for those looking for a jazz fix is the Wednesday night jam at Prophet Bar, where members of Grammy-winning Snarky Puppy and Erykah Badu’s band are known to play.