Wikicommons
The flu virus the the main cause of pneumonia. So cover your face when you sneeze.

Well, it's here. Dallas County Health and Human Services announced that "influenza activity is increasing in Dallas County" and issued a report noting an early November spike in reported cases. The emergence and spread of a new strain of the virus is an annual event, but this year, DFW's rate is rising more quickly than that of other places, with 7.5 percent of specimen testing positive versus the national average of 4.4 percent.

The impact is not serious yet, but there are some warning signs that this could be a bad season. The Associated Press reports that health officials nationwide are concerned because "the Southern Hemisphere, especially Australia, was hit hard over the past few months with a flu strain that’s notorious for causing severe illness, especially in seniors." That strain will likely migrate and wreck havoc. The Centers for Disease Control and Prevention estimate that the U.S. has tens of thousands of deaths each year from flu and the pneumonia it often causes.

In Dallas County, in the week ending Nov. 11, 26 people were hospitalized, and the number of emergency room visits for influenza-like symptoms were "slightly above baseline levels," according to DCHHS. Those afflicted with the flu virus report fevers, coughs, sore throat, runny noses, body aches and fatigue. Some people also report vomiting and diarrhea, DCHHS adds.

The county also released this handy chart to show how the flu is stalking us. Of the reported cases, DCHHS says more than 80 percent are Type A. Some fun facts about this variety: The virus is always changing, requiring development of a new vaccine every year. This is the epidemic-causing kind of flu, spread by humans but also carried by birds and other animals. Type B flu is less severe, is only carried by people and is not considered a candidate for a pandemic. 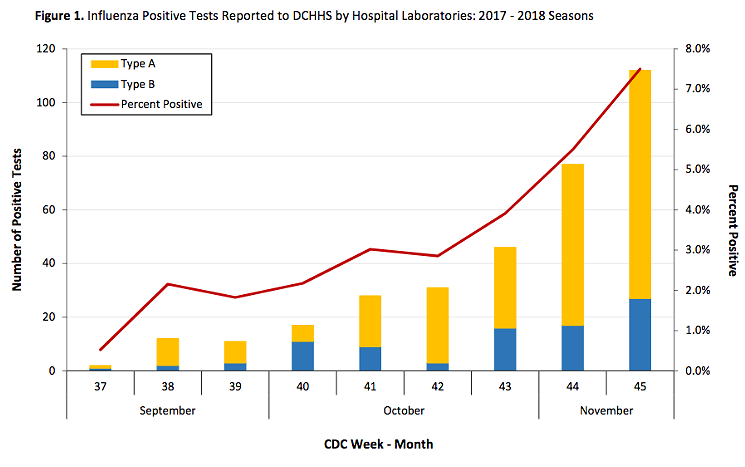 DCHHS
County officials recommend flu vaccinations for almost everyone, except children younger than 6 months. The flu vaccine is available for children at all county clinics and for adults at the main clinic, 2377 N. Stemmons Freeway. Click here for clinic hours and locations.

It takes about two weeks for the body to develop the antibodies that fight the flu. Given the chart above, that's something to think about.