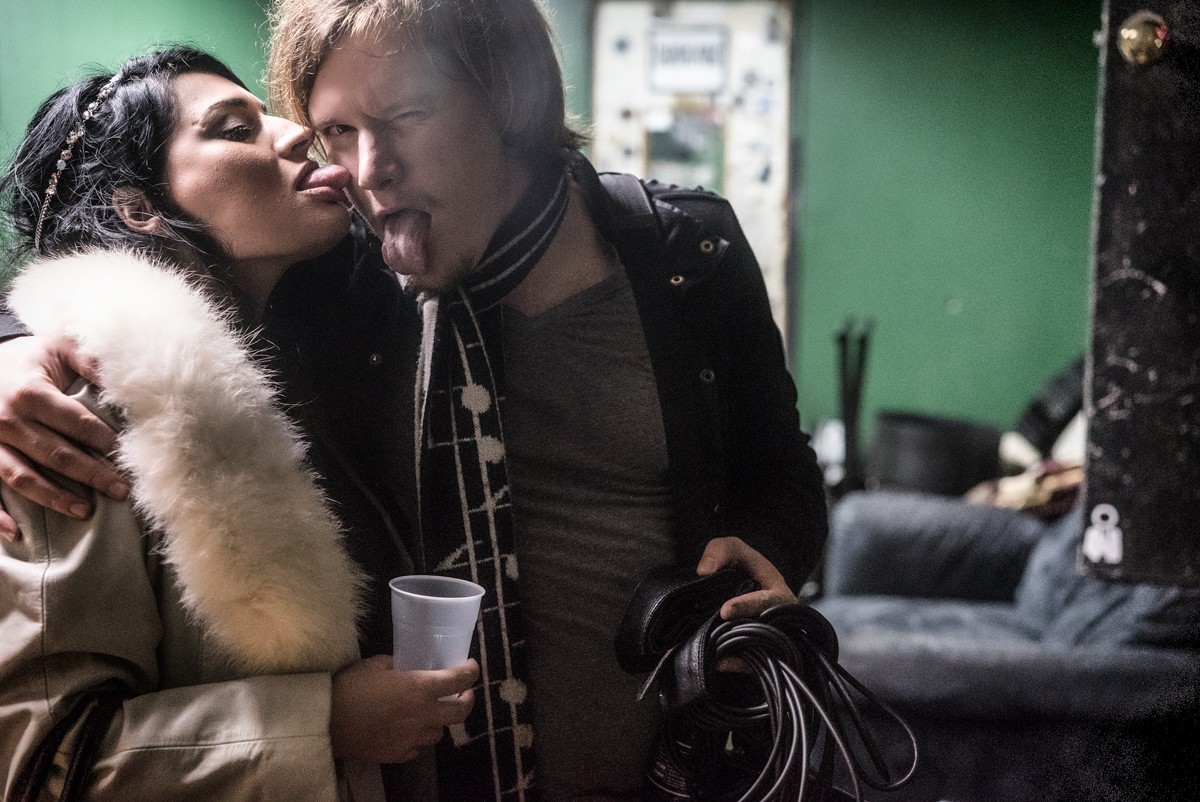 Mike Brooks
Observer writer Eva Raggio and Stephen Ketner at last year's Dallas Observer Music Awards Showcase, which takes place again this Saturday. Today is also Eva's birthday. Happy birthday, Eva!
Fri 12/1
CNN anchor Anderson Cooper and Andy Cohen are close friends who first met onstage at the famed 92nd Street Y in New York. They had such great chemistry onstage that they decided to turn their witty banter and exchanges into a conversation tour filled with funny tales about their storied media careers and answers to pressing questions about politics, entertainment and the nature of celebrity. Anderson and Cohen’s show, AC2: Deep Talk and Shallow Tales will make a stop at 8 p.m. Friday at The Pavilion at the Toyota Music Factory, 316 W. Las Colinas Blvd. in Irving. The evening will feature a conversation with Cooper and Cohen followed by a Q&A from the audience. Tickets are $68 to $89 and can be purchased at ticketmaster.com. The Pavilion at Toyota Music Factory, 316 W. Las Colinas Blvd., Irving, 8 p.m., $68-$89, ticketmaster.com. — Danny Gallagher

Last year, Dead & Company debuted as the modern reincarnation of one of the most influential jam bands of all time. Dead & Company comprises three of the Grateful Dead’s earliest members, Mickey Hart, Bill Kreutzmann and Bob Weir, as well as John Mayer, who was integral to re-forming the surviving members during the Fare Thee Well tour. The band, which also includes keyboardist Jeff Chimenti and bassist Otel Burbridge, has yet to release anything but live recordings each concert since fall 2015. Since then, the band has gone on a nearly nonstop tour, taking three-month breaks as it crisscrosses America. Far more than a glorified cover band or a worse-for-wear nostalgia act, Dead & Company attempts to re-create the cavernous sense of psychedelia the Grateful Dead made famous more than half a century ago. American Airlines Center, 2500 Victory Ave., 7 p.m., $68, ticketmaster.com. — Nicholas Bostick

Wreaths, lights and Christmas trees seem to emerge earlier and earlier each year. All this premature decoration can really dampen the fun of the season. But don’t fret — the Dallas Symphony Orchestra has you covered. If you’re looking to get into the holiday spirit, it doesn’t get much better than the DSO’s annual Christmas Pops concert. Joined by the Dallas Symphony Chorus, the DSO will perform a number of classics, including “Sleigh Ride” and “12 Days of Christmas.” Matinee performances will offer something special, with the DSO and DSC teaming up with the Children’s Chorus of Greater Dallas. Performances run Friday through Dec. 17 at the Meyerson Symphony Center, 2301 Flora St. Tickets start at $24. For more information, visit mydso.com. Meyerson Symphony Center, 2301 Flora St., $24 and up, mydso.com. — Jonathan Patrick

Now that all that pumpkin spice silliness is behind us for the year, we can move forward to a blend of flavors that’s not as reminiscent of bathroom potpourri: mulled apple cider, or as it was known in days of yore, wassail. The medieval beverage didn’t have the benefit of multizillion-dollar marketing from big coffee conglomerates, but it has staying power thanks to its simplicity, spirit and association with all things merry and bright. This year, wassail gets some much-deserved star treatment during Wassail Weekend in downtown Denton from 5:30-8 p.m. Friday and 1-4 p.m. Saturday. On both days, downtown merchants will brew up their best wassail recipes and pass out cups of the warm treat as part of Denton Holiday Lighting Festival events. Upward of 40 restaurants, stores and other stops will be wassailin’. You can try ’em all and then vote for your favorite at dentonmainstreet.org/wassail-weekend, which is also where you can find a full list of participants. Downtown Denton, 5:30-8 p.m., free, dentonmainstreet.org/wassail-weekend. — Jennifer Davis-Lamm

When Chevelle rolls through town in support of its latest album, The North Corridor, this week, the family trio may be a little more cautious than usual. 2017 marks 10 years since the alternative-metal band’s trailer was stolen outside a Fort Worth hotel with more than $200,000 worth of gear in it, including 14 guitars, amplifiers and studio monitors. The band was left with nothing, not even a drumstick for the rest of the tour, according to Robert Wilonsky, who reported on the incident. The band recovered and may be doing even better than in 2007. The North Corridor, the band’s eighth studio album, charted in the top 10 of the Billboard 200 thanks to the band’s heavier, more aggressive approach on this album, which drew comparisons toTool and Queens of the Stone Age. The trio is playing its biggest venue as a headliner; past North Texas stops were at House of Blues and Ridglea Theater. Southside Ballroom, 1135 S. Lamar St., 7 p.m., $30-$86, southsideballroomdallas.com. — Mikel Galicia

Sat 12/2
They would never admit it, but few things make music fans happier than humble-bragging about witnessing a big-name band, rapper or singer-songwriter at some tiny club when the act is playing stadiums. Want to be that smug, liked-them-better-before-they-got-big snob someday? You’re likely to catch a future superstar and guaranteed to catch many a local legend when more than 50 local acts perform on nine stages at eight venues at this year’s Dallas Observer Music Awards Showcase on Saturday. Venues include Dada’s indoor and outdoor stages, The Door, Green Room, Off the Record, Prophet Bar, Reno’s Chop Shop, Three Links and Trees. Music acts represent the best of the city with something for everyone’s taste. General admission tickets are $15, and you can get the VIP treatment, which adds three drink tickets, catered snacks, a DOMA T-shirt and, perhaps most crucially, access to a private bathroom, for $44. Find the showcase lineup, schedule and ticket information at dallasobservermusicawards.com or at the box office, which opens at 6 p.m. Saturday on Elm Street next to Trees. Multiple venues in Deep Ellum, 6:20 p.m.-1:20 a.m., $15 and up, dallasobservermusicawards.com. — Jesse Hughey

It was a near-run thing. After a major sponsor withdrew, the 30-year-old Dallas Holiday Parade was in danger of being canceled. Calls for donations went out, but the Christmas tradition downtown was short of cash, and it needed a miracle if it was going to happen this year. Did the miracle come? Of course it did, dummy — this is a Christmas story, after all. No parade would be like the Whos of Whoville waking up Christmas morning to wailing, cursing and scenes of domestic violence. Thanks to a generous donation from Toyota, the parade will do its annual march down Commerce Street between Houston and Harwood streets beginning at 10 a.m. Saturday. There’s plenty of free standing room along the route, but if you want to sit in comfort to watch the elves, floats and St. Nick march by, bleacher tickets, $20 to $60, are available at prekindle.com. Commerce Street between Houston and Harwood streets, 10 a.m., $20-$60, prekindle.com. — Patrick Williams

With the holiday season comes that deeply philosophical and oft travel-laden exercise that is “going home.” Whether that means a quick, happy trip up U.S. 75, a lengthy flight across the country, a fraught return to a place that you couldn’t wait to leave or a place bordered by your own threshold, this season always makes us consider the concept in ways both existential and physical. In WaterTower Theatre’s The Great Distance Home, a heartwarming new piece by Kelsey Leigh Ervi, an ensemble of five actors takes you through a multidisciplinary theatrical event that explores the concept of home. The limited-engagement production finds its main character, Boy, on a quest of discovery that seems to substantiate that age-old adage of “home is where the heart is.” Performances begin at 8 p.m. Friday at WaterTower Theatre, 15650 Addison Road in Addison, and continue through Dec. 17. Tickets are $28 at watertowertheatre.org. WaterTower Theatre, 15650 Addison Road, 8 p.m., $28, watertowertheatre.org. — Jennifer Davis-Lamm 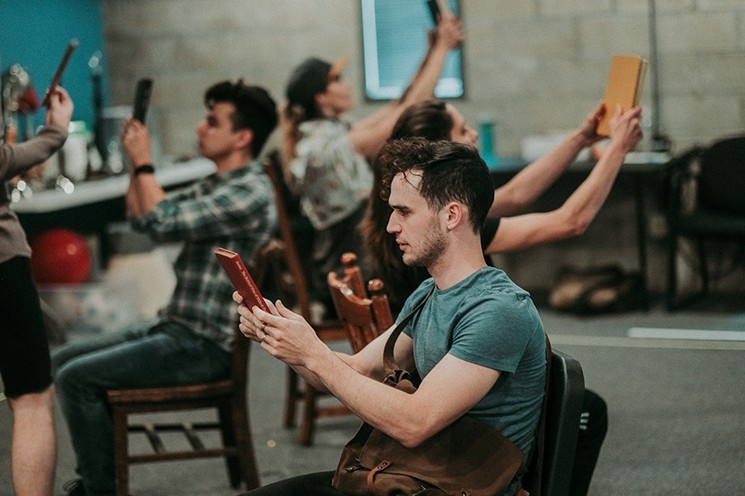 See The Great Distance Home at WaterTower Theatre in Addison.
Evan Michael Woods
Sun 12/3
As movie buffs, cinephiles and tapeheads know, lots of cool videos from the past haven’t yet made the transition into a digital format. Enter Dallas VHS Swap, which launched recently and aims to form a community for local tapeheads to trade and celebrate dead formats. Collector Eli Luna mentioned the idea of a meet-up and swap to G. Noel Gross and his wife, Karri, who co-own Piranha Vintage, because they regularly screen VHS tapes in their shop and have a curated selection of tapes. For the first event, Dallas VHS Swap is encouraging collectors to bring as many tapes as they can comfortably carry or fit in their trunks to swap or sell from 3 to 5 p.m. Sunday at Piranha Vintage, 205 W. Main St. in Richardson. The event is free. The only rules or guidelines posted by Dallas VHS Swap: 1) Be kind. 2) Rewind. For more information, visit the Dallas VHS Swap group on Facebook or piranhavintage.com. Piranha Vintage, 205 W. Main St., Richardson, 3-5 p.m. Sunday, free, piranhavintage.com. — Daniel Rodrigue

JaRule and Ashanti have a linked history, but then again many artists followed the path Ja paved in the late 1990s. But as his trajectory appears to be heading steadily downward, Ashanti's star is still in the sky. As a successful artist with the Murder Inc. label, part of the Def Jam empire, JaRule kept the light on as other artists, including Ashanti, made their marks. JaRule's best days are behind him, but Ashanti remains a media powerhouse. Ashanti's album Braveheart was released in 2014, and acting has kept her in the public eye. She was one of the leads on the television show Army Wives. That Lifetime show caps a solid acting career, onstage as well as on-screen. Ja turned down a recurring role in The Fast and the Furious sequel and did jail time for tax evasion. Ticket buyers and investors in the failed Fyre festival, of which he was a co-creator, are busy suing him. The Bomb Factory, 2713 Canton St., 8 p.m., $34.40-$183, thebombfactory.com. — Joe Pappalardo

Is your dog one to sport elf ears, or is he more of the yuletide bow tie sort? You’re going to want to figure that out before 11 a.m. Sunday because that’s when Mutts Canine Cantina, 2889 CityPlace West Blvd., is hosting its fifth annual Pictures with Santa Paws until 2 p.m. You can afford to invest in festive canine fashions since photos are free to Mutts Dog Park members and only $5 for nonmembers. Dog parents receive a frameable picture, and digital copies are available for download. No dog? No worries: Even if you show up sans pup, you could find your best friend among the adoptable pets Dog & Kitty City will have for meeting and greeting. Visit muttscantina.com or search the event on Facebook. Mutts Canine Cantina, 2889 CityPlace West Blvd., 11 a.m.-2 p.m., $5, see Facebook. — Merritt Martin

Chicken Scratch is a fun place year-round with its fried chicken menu and easy access to The Foundry bar. And while one of the chicken biscuits may leave you in a slightly more rotund state than you were before, a man whose belly is already quite round will soon visit the restaurant. That's right, Santa Claus is visiting Chicken Scratch. A veritable North Pole wonderland, replete with a petting zoo and a photo-op zone, will be constructed in his honor. Chicken Scratch, 2303 Pittman St., noon-4 p.m., free, see Facebook.— Kathryn DeBruelr