We Found Three Fake Dallas Restaurants on Google Maps, So We Created Our Own

Google Maps screenshot by Brian Reinhart
Chicken Or Tacos, an imaginary restaurant on Garland Road
When you’re a food critic, a lot of your research involves maps. Every few weeks, I scroll around Google Maps hunting for new restaurants to review, clicking on every orange fork-and-knife icon along the streets of Dallas and its suburbs. Reviews have resulted from Google Maps finds.

On Jan. 2, I spotted a restaurant on Garland Road in East Dallas with the irresistible name Chicken Or Tacos. I imagined debating which menu item to order. Chicken or tacos? Would it sell chicken in tacos?

Google had enticing information about Chicken Or Tacos. It’s “popular for solo dining,” offers takeout, is kid-friendly and has a casual dress code. It’s located near the Royal Pour, Goodfriend Package and Hello Dumpling. But other information was missing. No phone number or hours were listed, and no customers had left reviews. The address was 75038 Garland Road, which appears not to exist.

More details about Chicken Or Tacos. It's family-friendly!
Google Maps screenshot by Brian Reinhart
From there, things got stranger still. I searched the Dallas County Appraisal District and found no evidence of Chicken Or Tacos. The city’s health inspection database turned up only one restaurant on Garland Road with “Taco” in the name, a Torchy’s. I visited the physical location and walked down the block, seeing no sign of either a restaurant or a chicken-or-taco truck.

“I have never known about a Chicken Or Tacos place," says Josh Yingling, one of the founders of nearby Goodfriend Package. “I do love both of those things, though.”

June Chow, owner of Hello Dumpling, agrees. “I’ve not heard of it,” she says. Google Maps claims that Chicken Or Tacos is within 0.2 miles of Chow’s and Yingling’s businesses.

Only one source corroborated this mysterious restaurant — surprisingly, local real estate listings. I was able to find at least five online listings that included Chicken Or Tacos in a catalog of nearby restaurants.

A local real estate listing features Chicken Or Tacos as a restaurant near the house for sale.
Screenshot by Brian Reinhart
Most of the realtors did not answer my emails, but Redfin, a national service, did. Redfin communications specialist Alina Ptaszynski confirmed that the site generates its nearby business information from Google Maps.

“That section of data at the bottom of the page comes from Walk Score, which is owned by Redfin,” Ptaszynski says. “That specific place was pulled from Google. If it really is a phantom place, we can remove it from Walk Score.”

This points to Google Maps as the sole origin of Chicken Or Tacos.

My restaurant's hipster logo.
Hipster Logo Generator
Google did not respond to a request for comment. So, in order to better understand the company’s fraud prevention policies, I went rogue. I made my own fake restaurant.

I called it We Make Donuts and located it in Oak Cliff. Using the Hipster Logo Generator and a free paintbrush app, I created a logo featuring two doughnuts being sliced by katanas. Some friends and I dreamed up a suitably preposterous concept: We Make Donuts would make doughnuts but refuse to sell any. Instead, the menu would feature literally any other food.

When I submitted We Make Donuts to Google’s “add a missing place” feature, it was approved instantly. Within seconds, I added fake hours, the fake logo and a picture of the restaurant’s specialty, Chinese dumplings. Then my friends began writing fake reviews, also all published immediately.

This screenshot has been modified to protect the privacy of my accomplices. I bear full responsibility for our shenanigans.
Google Maps screenshot by Brian Reinhart
Google’s algorithms didn’t blink a metaphorical eye when my friends’ reviews separately praised the restaurant for falafel, muffins and bibimbap, or when I uploaded a picture of dumplings. Within hours, I was able to type “we make donuts” into the search bar and find the address of my imaginary restaurant, complete with hours (7 a.m. to 3 p.m. Monday through Saturday), reviews and photograph. One point in Google’s favor: The restaurant only appeared in response to searches, unlike either its real neighbors or Chicken Or Tacos, which are all displayed on the map by default.

This is how We Make Donuts appeared on the map during its 18-hour existence. Those dumplings are actually from Shanghai Dumpling in Cupertino, California. (Photo by Brian Reinhart)
Google Maps screenshot by Brian Reinhart
The next day, I tried taking the next step: reporting my baby as an error in the map. Once again, the change was approved instantly. Google Maps didn’t ask me why I, the person who created We Make Donuts, was now selecting “never existed” on the feedback form. With just a few clicks, my restaurant had vanished.

A few days later, in another Dallas neighborhood, I found another imaginary restaurant.

Buckfun Eatery, the second fake restaurant on Google Maps in Dallas.
Google Maps screenshot by Brian Reinhart
Buckfun Eatery is in an empty lot across the street from Alamo Drafthouse, just south of downtown. Once again, Buckfun is listed as popular with solo diners, good for kids, casual in ambience and available for takeout. Buckfun accepts credit cards and has a wheelchair ramp. Buckfun is listed only on Google Maps and a number of sites that pull information directly from Google. (It is absent from Bing Maps, for example.) But there is one big difference between this restaurant and Chicken Or Tacos: Buckfun Eatery has a phone number.

Both times I called, I got this message: “I’m sorry, but the person you called has a voicemail box that has not been set up yet.”

Jackson, the imaginary bar located inside the Inwood Station apartment complex.
Google Maps screenshot by Brian Reinhart
The next morning, I found my third fake, a bar called Jackson at 2727 Inwood Road, the same address as the new Inwood Station apartment complex. Google’s orange pushpin situated Jackson right next to the DART tracks on the northeast side of the property.

“We don’t have a bar there,” an Inwood Station leasing agent told me as he, too, stared with confusion at the map. “I wish we did.”

The good news is that my We Make Donuts hoax probably would have disappeared within a few weeks. In spring 2017, researchers found hundreds of thousands of fake businesses on Google Maps, including scammers fraudulently moving offices to more desirable addresses. Google says it cracks down on this through a series of algorithms — which We Make Donuts beat — but also by sending the new business a postcard with a confirmation code. If a postcard is in the mail, my restaurant was doomed. 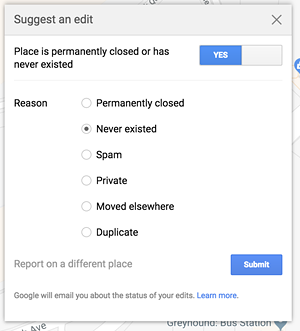 I asked two owners of recently opened restaurants if they had received letters verifying their Google Maps locations. Hello Dumpling opened in August, and Chow says she got a confirmation letter, but at Sachet, which debuted a few weeks later, Allison Yoder says they have not heard from the tech giant.

As glad as I am to restore the map to accuracy by removing my phoney falafel-muffin shop, I was left wondering about the speed of that deletion process. There were photos and reviews of We Make Donuts, plus an hours listing, but that evidence was outweighed by a single person reporting the restaurant as fake. What if pranksters reported real restaurants as moved or closed? What oversight process would prevent malicious attacks on small businesses?

Businesses can “claim” their listings, insulating them from such attacks and gaining the right to correct hours and contact information, but few businesses — especially small ones that can’t afford PR specialists — do this. A quick search reveals that some of the most beloved restaurants in Dallas have not been claimed on Google Maps.

Now that I’ve used the godlike powers Google gives its users to open and close a restaurant, I’m alarmed about what those powers mean. Algorithms still don’t know what’s a prank and what’s real. That might lead to some harmless fun if a fake restaurant crops up in a corn field, but what if some poor victim drives to the field for dinner? And what happens when a real restaurant gets deleted?

Perhaps perversely, this experience left me unwilling to make any changes to the map. The power to create and destroy gets me nervous. So, unlike We Make Donuts, I didn’t delete Buckfun Eatery, which is still on the map. The same goes for Jackson and Chicken or Tacos.

But I left a review of Chicken Or Tacos. Hey, nobody’s perfect.