A Few Fun Facts About Picnic Escobedo (For Starters, He Loves Wrestling) 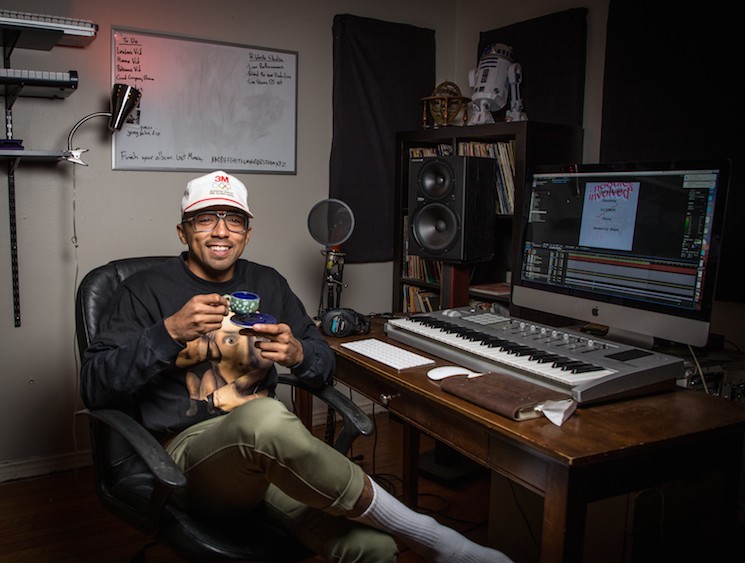 Exploredinary
Richard "Picnic" Escobedo has something that might interest Mariah Carey.
This week the Observer visited the home of Dallas DJ, producer and frequent Erykah Badu collaborator Richard "Picnic" Escobedo. In between all the serious questions about his start in music, relationship with Badu and the origin of his nickname, we found time to ask him a few fun ones. Once you've read our full profile, check out this Q&A to learn about Escobedo's phobias and affinity for wrestling.

Dallas Observer: What’s the biggest time waster that you indulge in?
Escobedo: I probably spend too much time on Netflix trying to figure out what the hell I’m gonna watch.

What do you binge watch?
There’s a new show about toys, The Toys That Made Us. It’s so dope.

What was your favorite toy?
G.I Joe. I’m waiting to get to that [episode]. I used to collect them as a kid, and I still have some in my studio. I used to have way more but I had a big fire seven years ago.

A small selection from Escobedo's toy collection
Exploredinary
Do you have any phobias?
Rats and mice. I’m like a straight up bitch when it comes to that. To be honest, it’s probably the bigger reason why I got her [his dog]. It’s an older house and I would get them in the kitchen and I was so fucking terrified and I couldn’t keep them out.

Tell us a fun fact about your family.
I have a cousin named Mario who has been completely blind since he was born, and if it wasn’t for him and his sense of sound ... He’s one year older than me and I would teach him and explain to him what things looked like.

I would always try to hear what he heard and see the world like he’d see it, and shut my eyes. And I think that’s kind of where I got my keen sense of sound. He would play Mortal Kombat and beat everybody, he taught me that every movement makes a different sound. Now he has a mariachi band in San Antonio.

What’s your oddest habit?
I’m really, really, really into professional wrestling. And that’s odd to most people. [Points to the T-shirt he’s wearing]. This is a wrestling shirt actually. I’ve been into it since I was a kid and literally never grew out of it. Every Monday night I’m watching it.

But just a viewer?
(Laughs) Yeah, I’ve never tried to wrestle or anything, I just like it.

Do you believe it’s real?
It’s not real; I’m not one if those guys. But it definitely is entertaining. I’m more a fan of the spectacle.

What’s your biggest pet peeve on social media?
I know this is really strange, but I’m a single guy and it’s a super pet peeve whenever women that are kinda like putting themselves out there and they have kids, but you never see pictures with their kids, that shit is fucked up to me. It’s like yo, you have kids. I mean, if you have something in your life that you’re taking care of ... You put pictures of your cleavage but not with your kids.

Tell us the last song you looked up, especially if it’s embarrassing.
The John Cena theme song. He’s a wrestler. I was at this Pho place and on the receipt the server put his name as “John Cena” so I thought that was weird. So I asked him if that was his name and then I searched it.

What were you like in high school?
I was a drummer so my life was like, whenever that movie Drumline came out with Nick Cannon, that came after I was in high school but I wish it didn't ‘cause that was like me. I was obsessed with it, I walked around school with my drum sticks. I was cool enough for the cool kids but also nerdy enough for the band kids. I like to think I was pretty cool. It was a small town. It’s not hard to be cool out there.

Which fictional character would you be if you could?
Probably Willy Wonka. Who wouldn’t want Willy Wonka’s life? Rich, candy, yeah... I like the old movie. I watched it again as an adult and I saw all the hidden messages. Escobedo is pretty proud of his wrestling shirt.
Exploredinary