Don't Give Your Money to Co-Working Spaces; Give it to Dallas' Public Libraries 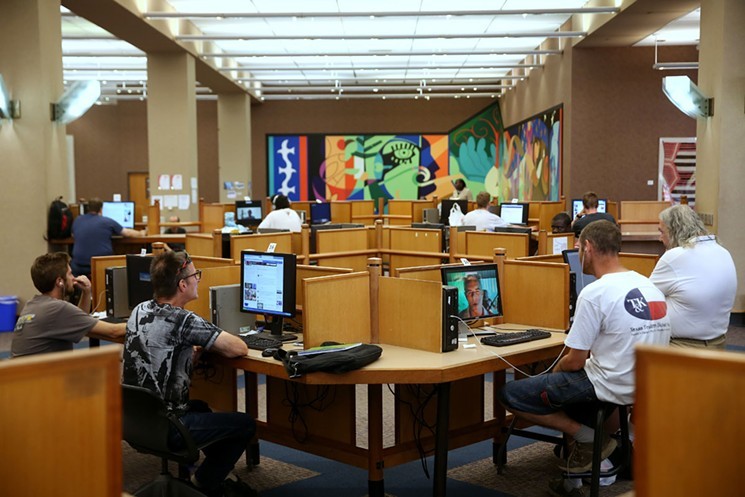 Dylan Hollingsworth
Computer stations at Dallas' Central Library
A dozen strangers are typing away on computers inside a open, modern and brightly lit space on a weekday afternoon. In an adjacent private room, a group is preparing a presentation. Printers are operating at full capacity. Flyers on the walls announce lectures to take place that weekend. At the coffee and snack station, a man and woman are engaging in a lively debate about the Joe Nichols country tune "Tequila Makes Her Clothes Fall Off."

You might reasonably guess that this scene took place at one of the dozens of co-working spaces that have cropped up in Dallas in the last few years. Common Desk, Dallas Fort Work and WeWork are just a few of these businesses where, for a large monthly fee, you can get access to all of the amenities of a traditional office, plus some other, more fun ones, such as snacks, community events and the potential to make new friends.

But it didn't take place at Common Desk. It took place at the Allen Public Library. You'll have a similar experience if you visit any of the city of Dallas' public libraries. They're not as nice as Allen's, but they could be.

In 2015, the Observer published a story about the state of Dallas' public library system, which reported that it's found a new identity as a refuge and a tool for Dallas' homeless population, but it's hard up for cash and struggling to convince average Dallasites of its relevance in the age of Google.

Three years ago, the city of Dallas gave $26 million from its general fund to libraries, which made Dallas' the second-worst-funded library system in the United States. (Houston took first.) This year's figure — $31.9 million — is better, but still less than the $32 million in 2007.


It's a marketing problem that Dallas' 28 free libraries are poor and under-utilized while almost as many coworking spaces are able to survive on $100-plus a month memberships.

It's a marketing problem that Dallas' 28 free libraries are poor and underutilized while almost as many co-working spaces are able to survive on $100-plus a month memberships. Most of the amenities are the same: printers, free Wi-Fi, private rooms and a variety of seating options.

Even if you have an office or a home working space, it's fun to daydream about using a co-working space to start an Etsy shop or crank out that book you've been too distracted to begin writing at home.

And co-working spaces have produced lots of success stories. The Observer recently profiled New York Times-bestselling illustrator Arturo Torres, who was inspired to give a career as an artist a shot by his time managing the Common Desk location in Deep Ellum.

“Being a Latino raised in a lower-income household, you fight and struggle to just keep the lights and have leftover money for food,” he said. “So when I started working [at Common Desk] and meeting all these creatives and hungry people that share the space, I thought they were nuts because there's no security in doing your own thing."

This sense of community is arguably the biggest selling point of co-working spaces. But how can these pricey clubs offer a truer sense of community or a more honest cross-section of Dallas than a free public library, where you'll encounter all walks of life and are almost guaranteed to hear several languages being spoken?

Sure, you might have to pop over to a bar down the block if you start craving a craft beer during a visit to the J. Erik Jonsson Library downtown, and treadmill desks (offered at Common Desk) probably won't ever be in the city's budget.

But if the opportunity to meet and interact with like-minded creatives and entrepreneurs is what's driving Dallasites to co-working spaces, what they should really be doing is showing up to Dallas' libraries and plunking in a few dimes for copies. They'd save a lot of money — and the Dallas libraries, too.