For the last year and a half, Denton psychedelic outfit Acid Carousel has been dazzling audiences with its whimsical brand of rock 'n' roll, which draws influence from a variety of bands, ranging from the Damned to the Shangri-Las.

This Friday, the band's new EP, Street Cowboys, will be available for purchase on Bandcamp. Ahead of the release, the Observer is premiering a new track, “Captain Marigold.” The song features a vocal assist from frequent Acid Carousel collaborator Ariel Hartley (Pearl Earl).

The band's guitarist and vocalist, Gus Baldwin, says the song is a bit of an outlier on Street Cowboys. “‘Captain Marigold’ came around as a group of songs we were putting together for a rock opera we just started recording with Brack Cantrell, but we eventually decided we wanted to do something else with it," Baldwin says.


"The song's actually about a fictional cartoon ship captain who has a kids' TV show and ends up killing some kiddos by accident on TV." — Gus Baldwin

The song is darker and drives harder than the band’s past recordings. It trades free-spirited dreaminess for a nightmarish vision of a doomed boat ride. "Captain Marigold" sounds like what would happen if Willy Wonka were to pilot a yellow submarine through the factory’s tunnel. Yes, the danger must be growing.

“The song’s actually about a fictional cartoon ship captain who has a kids' TV show and ends up killing some kiddos by accident on TV," Baldwin says. "It’s kind of weird, but I just thought it was an amusing situation to think about — like if The Crocodile Hunter would have had guests.”

This song is a step forward for a band that has seen marked growth in fan interest since KXT and other area radio stations began playing its breakthrough single, “Higher Than the Beatles,” late last year.

"Higher Than the Beatles," from the album of the same name, introduced fans to a dreamy, bedroom style of psych-rock, recorded around Dallas and Denton. For Street Cowboys, the recording process became a bit more structured.

“We still recorded a lot of the material at our house, the Candy Mansion, in Denton,” Baldwin says. "But we did all the mixing and postproduction over at our bassist Ian Salazar's place in Arlington.” 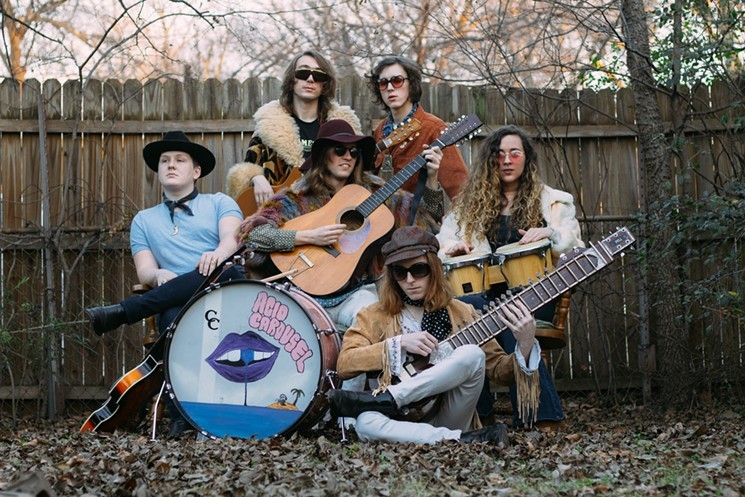 courtesy the artist
The band has also expanded its musical repertoire for the new EP, using “more outside instrumentation than before, including vibraphone, trumpet, saxophone and whatever we could find in order to create that supreme listening experience we all love,” says John Kuzmick, who also plays guitar.

“Musically, the rest of the EP is probably a little more toned down than the stuff we've released recently,” Baldwin says. “The first track, ‘Spaceships (The Prequel),’ is a sort of dreamy, ethereal celebration, and the last song, ‘Killer on the Moonbeam,’ is probably one of the more somber and mellow songs we've ever done.

"'Killer on the Moonbeam' was actually the first song I had written purposely without any drum set, which is kind of strange to me — but I liked the change in experience," he continues.