courtesy Brad Hawkins
Actor Brad Hawkins has a new venture, a Frisco sushi restaurant.
Your generation and entertainment penchants likely determine how you know the name Brad Hawkins, but odds are you’ve seen his face or heard his voice.

He portrays a flawed, heavy-drinking, war-veteran stepfather in Richard Linklater’s pioneering and buzz-generating Boyhood, the Academy Awards best picture nominee narrowly vanquished by Birdman in 2015.
Thirty-somethings might recall him as the white Power Ranger. Contemporary country music fans have heard his once-ubiquitous romantic ballad, one of those embedded in soft-lit video and played on CMT.

Suburban Dallas diners perhaps have encountered him at restaurants in which he’s invested, where he might distribute a round of drinks and spare a moment for small talk. His latest venture: the recently premiered Sushi Marquee in Frisco.

The '80s-tinged sushi restaurant seems like less of a stretch if you know of Hawkins' other endeavor, an '80s pop tribute band called Awesome Sauce.

Despite Hawkins' many successes, the 42-year-old Dallas native encountered tragedy at a young age. When he was 14 years old, before he enrolled in high school in Plano, his mother, who had clinical depression, killed herself. He knew she was sick, he says, and he quickly learned how deep the roots of depression can go.

“But she was essentially my only parent when I lost her," he says. "My dad was alcoholic.”

At that point, Hawkins says, “I was at a crossroads.”

“I could spiral, go down a negative path, but I did not want to be them," he says.

He had good people in his life who saved him, he says. For example, a gym owner named Dennis Sheldon gave Hawkins his first job before fortune finally struck. A representative from the talent and modeling Kim Dawson Agency approached him and put him in the limelight, a place he found comforting and exciting.

A few years later, he packed into his car the few things he owned and move to Los Angeles, where luck remained on his side. He surfed a few couches but hastily earned a starring role as the white Power Ranger in the 1990s live-action superhero TV series.

Hawkins later procured acting and voiceover parts and landed a lead role in the miniseries Shake, Rattle and Roll on CBS. His acting career wasn’t exactly exploding, however, so he wholeheartedly chased another dream — making music.

He moved to Nashville and landed a major record deal that sent him touring with artists such as the Dixie Chicks, Faith Hill and Tim McGraw. In 1998, he recorded the hit country song “We Lose.”

When stardom dimmed in the mid-2000s, Hawkins moved back to Dallas. He needed a job, he says. He secured one as “VIP frontman” at the Ghost Bar, a swanky Las Vegas-born nightclub overlooking Victory Park.

“I love the hospitality business," Hawkins says. "I met people and networked.”

Then he scored the role of a lifetime in the film Boyhood, a winner of six Academy Awards and the most talked-about movie that year. It told the tale of a boy’s journey from childhood to adulthood, and Patricia Arquette and Ethan Hawke played his biological parents.

Hawkins portrayed the second of three stepfathers, a drunken and damaged military man. He's thankful to Linklater, the prolific director and a fellow Texan, for the dreamlike opportunity. The two casually chatted for a couple of hours before Hawkins scored the part.

“The character I played — well, the role reminded me of my relationship with my own dad,” Hawkins says.

Linklater filmed Boyhood a few days a year for 12 years. The project fascinated Hawkins. The picture’s success left him flummoxed.

“We did not think it would have the kind of reception it did," he says. "I really thought the attempt at making a movie this way was more impressive than the actual movie. The end product was great, but the attempt was even more so.”

Hawkins considers Boyhood the pinnacle of his Hollywood career. He says acting isn’t really his calling. Restaurants, he says, are his real destiny. 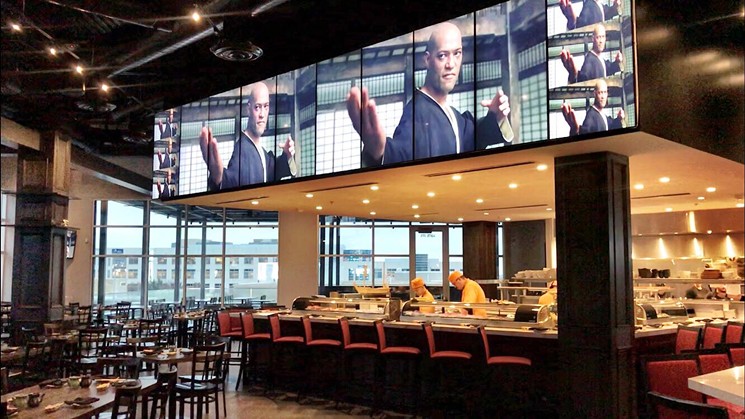 Kitschy new Frisco restaurant Sushi Marquee combines all of Hawkins' favorite things: dining, movies and the 80s.
courtesy Sushi Marquee
Hawkins has part ownership of several restaurants, including Shakertins in The Colony and Chop Shop in Carrollton. He cherished the idea but didn’t really know much about the business at first, he says.

That’s why Sean Clavir, co-owner of Chop Shop, was so impressed with Hawkins.

“He was there every day as we prepared to open, by my side, learning everything,” Clavir says. “All of these things that he does, he puts everything into it and does it right, all out. There is no one I’ve met who invests so much in so many things or has such a brilliant imagination.”

Opening Sushi Marquee at the Star in Frisco, the Dallas Cowboys’ headquarters, was the realization of a 20-year desire to build an entertaining, idiosyncratic restaurant featuring distinctive dishes, Hawkins says.

“It’s my passion project, combines all the things I love, and I’ve been wanting to do it for so long that I am enthusiastic to a fault,” he says of the 5,000-square-foot Japanese cuisine and sushi eatery.

If your timing is right, Hawkins’ 80s cover band, Awesome Sauce, might show up at one of his venues. The restaurateur channels Van Halen, The Clash or George Michael with aplomb. He isn’t married and doesn’t have kids — he says he is too busy for that right now. His ambitions for the future seem relatively simple, compared to the many lives he has lived so far.

“I want to retire, get out of Dallas, see the world, be inspired," he says.